Abstract
Alzheimer’s disease (AD) is a devastating disease, and the most common form of dementia to afflict the elderly population. The disease causes a slow but progressive neurodegeneration, leading to memory impairments and dysfunction in other cognitive domains. The molecular mechanism of disease development and progression has not yet been fully established, nor have any cures or effective, long-lasting treatments been developed. Various transgenic mouse models of AD have proven to be invaluable tools for elucidating disease mechanisms and for providing a platform to evaluate therapeutic strategies. In this chapter, we discuss findings from the 3xTg-AD mouse model, which develops both plaque and tangle pathologies, the two major pathological hallmarks of AD. Studies using the 3xTg-AD mice have revealed a strong interaction between amyloid-beta (Aβ) and tau, which synergistically drive the pathogenesis in the brain.
Key words
Alzheimer diseaseAmyloid-betaTau3xTg-AD miceAnimal models

Alzheimer’s disease (AD) is the leading cause of dementia in the elderly population, afflicting nearly 24 million people worldwide (1). AD patients suffer through a progressive cognitive decline, characterized by the devastating loss of semantic and episodic memory, impairments in judgment, spatial orientation, and language. The disease process is believed to be triggered by the accumulation of the amyloid-beta (Aβ) peptide, which lies upstream of the other pathological changes. AD brains are marked by two pathological hallmarks, amyloid plaques (comprised of Aβ) and neurofibrillary tangles (NFTs), which are made mostly of hyperphosphorylated tau protein (2, 3). Other pathological changes occur as well, including the occurrence of dystrophic neurites, synapse loss, and neuron loss. Currently, no effective treatment exists that either halts or slows the progression of the disease. Thus, there is a great need to more fully understand the disease and to develop and test potential therapies for clearing the pathology and restoring cognition. In the past 2 decades, research has advanced significantly due to the identification of genetic components of AD, and the subsequent development of transgenic mouse models that mimic AD pathology and cognitive decline. These transgenic mice have helped expand our understanding of AD pathogenesis and have provided insights into possible therapies.

Genetic analysis of rare, autosomal dominant, early-onset AD identified Aβ as the main culprit behind the pathogenesis of the disease (4). Mutations in the presenilins (PS-1, PS-2) or the amyloid precursor protein (APP) lead to either increased production of total Aβ, the longer more amyloidogenic Aβ1-42, or increase the aggregation of Aβ (5). These findings heralded the amyloid cascade hypothesis, which stipulates that the accumulation of Aβ is the main driving force behind the development of AD (6). Additional genetic evidence provides further support for the amyloid cascade hypothesis with the discovery that patients with APP gene duplications and Down syndrome develop Aβ plaque and AD-like pathologies (7, 8).
The mutations associated with early-onset AD quickly found their way into transgenic mouse models, and the findings from these models have largely supported the amyloid cascade hypothesis (9). Transgenic mice overexpressing various mutant APP constructs develop Aβ pathology with some also displaying cognitive decline reminiscent of human AD (10–12). Aβ deposits in progressive fashion and eventually develops into extracellular plaques. Similarly, transgenic APP mice exhibit impairments in behavioral tasks. In contrast, mutations in PS1 that cause FAD in humans do not lead to amyloid deposition and impaired behavioral phenotype in mice despite disruptions in calcium homeostasis and increases in Aβ1-42, a form of Aβ more prone to aggregation (13, 14). However, crossing APP and PS1 mice exacerbates the Aβ pathology and accelerates the development of cognitive impairments (15, 16). Thus, the introduction of multiple transgenes into mice has expanded our understanding of the role that mutations in PS1 and the subsequent increase in Aβ1-42 might play in the development of AD. Even though multiple mutations are not expressed in humans, the introduction of multiple transgenes in mice does provide relevant insight into the pathogenesis of AD.
Despite the introduction of the APP and PS1 transgenes in an attempt to better recapitulate AD pathology, these mice still lack tau pathology. Hence, it became obvious that more aggressive approaches would be necessary, including the introduction of additional transgenes to mimic both Aβ and tau pathology in a mouse. One means of achieving this goal is to cross independent transgenic lines (17). Alternatively, Aβ and tau pathology can be induced by injections of pathological protein (18). Although both of these approaches create models that mimic the Aβ and tau pathology found in AD, they pose certain practical difficulties such as poor breeding, the appearance of motor deficits unrelated to AD, and short life expectancy. These unfortunate constraints preclude the use of these models in various applications including learning and memory studies.

To further study the interaction between Aβ and tau and their impact on AD pathogenesis, we sought to develop a transgenic mouse model that exhibits both Aβ and tau pathology. To achieve this goal, APP and tau transgenes were co-microinjected into single-cell embryos from mice with a knock-in of PS1 with a M146V mutation (PS1M146V-KI) (19). The Swedish mutation of APP (APPswe) containing the double mutation KM670/671NL was used to induce the development of Aβ pathology. To ensure the development of pathological tau lesions, instead of using wild-type tau, a mutant form of tau associated with frontotemporal dementia with parkinsonism-17 (FTDP-17) was used. In FTDP-17 patients, tau deposits into NFTs similar to AD, but the deposits develop in different brain regions (frontal-temporally). Likely as a result of the spatial positioning of pathology, unlike AD where memory deficits are first observed, in FTD, executive functioning is impaired and behavioral symptoms (personality changes) are observed (20). Nevertheless, mutations in tau generally cause tau to aggregate more easily. Hence, the human tauP301L transgene was included in the 3xTg-AD mice.
Both the APPswe and tauP301L transgenes were under the control of the Thy1.2 promoter, which limits expression of transgenes largely to the CNS (21). These transgenes were co-microinjected into single-cell embryos from PS1M146V-KI mice. As noted before, the inclusion of the PS1 mutation in mice increases the production of Aβ1-42 and accelerates the development of pathology. Thus, with the 3xTg-AD mouse model, Aβ and tau pathology accumulates rapidly, allowing study of both pathologies in the mouse lifespan. Yet, pathology still appears progressively and in relevant brain regions, making the study of different stages of the disease possible.
In addition to the development of relevant AD-like pathology, the 3xTg-AD mice boast excellent colony-maintenance characteristics. Both the APPswe and tauP301L genes integrated into a single locus and sort as if a single gene. In addition, PS1M146V is “knocked-in” into the endogenous locus so essentially the mice breed as if they ­contained only a single transgene, despite harboring three transgenes.

As noted before, Aβ and tau pathology develop progressively and in a brain-region-specific manner in the 3xTg-AD mouse model. Thus, tracking the development of pathology added support to the amyloid cascade hypothesis. Despite equal transgene expression of both APP and human tau, accumulation of Aβ precedes tau accumulation in the 3xTg-AD mice, and it is likely that Aβ accumulation drives the development of tau pathology (19).
Aβ pathology in the 3xTg-AD mice first appears intraneuronally at 3–4 months of age in the neocortex. At this point in time, these accumulations are detectable by various anti-Aβ antibodies including Aβ1-42-specific antibodies, and most of the Aβ is still detergent-soluble. That soluble intraneuronal Aβ accumulation precedes plaque formation is consistent with other transgenic mouse models (22). Similarly, brain affected by Down syndrome shows evidence of increased Aβ production likely due to the increase in APP copy number and also forms intraneuronal Aβ deposits before extracellular accumulations develop (23). As the mice age, Aβ continues to accumulate as levels of both Aβ1-40 and Aβ1-42 increase. By 6 months, intraneuronal Aβ can be found in the hippocampus in the CA1 region and also in the amygdala. By 6 months, some of the intraneuronal Aβ is oligomeric in nature as the deposits are detectable by the antibody A11 (24).
Around 9 months of age, extracellular deposits of Aβ first begin to appear in the cortex. As extracellular plaques of Aβ develop and enlarge in size and number, intraneuronal Aβ begins to recede, but exactly what triggers the shift of Aβ from intracellular stores to extracellular space is not clear. Nevertheless, Aβ continues to accumulate extracellularly such that by 12 months of age, extracellular deposits can be seen in the hippocampus and some plaques become thioflavin-S positive, indicating the development of β-pleated sheet characteristics (25). By 15 months of age, extracellular plaques are widespread throughout the hippocampus and cortex. At this stage, large amounts of Aβ are found in detergent-insoluble fractions and likely fibrillar forms of Aβ dominate. However, even with the development of plaques, oligomeric forms of Aβ and other soluble Aβ species persist (24).

3.2 Tau Pathology in the 3xTg-AD Mice

Similar to the deposition of Aβ, tau pathology also follows a temp­oral and brain region-specific manner. Immunoreactivity for the antibody HT7, which detects human tau, is evident only in the somatic-dendritic compartment in pyramidal neurons of the CA1 region as early as 4 months of age (26). Mimicking the pattern observed in human brains, tau later spreads to cortical regions (19). As the mice age, reactivity with the conformation-specific MC-1 antibody appears first, followed by phosphorylation of tau. The MC-1 antibody detects a pathological conformation state of tau protein observed in the early stages of AD brains (27). The phosphorylation of tau at certain epitopes can be detected using monoclonal antibodies against specific phosphorylation sites. For example, the AT180 antibody detects tau phosphorylated at Thr231, AT8 detects tau phosphorylated at Ser202 and Thr205, and PHF-1 detects tau phosphorylated at Ser396 and Ser404. In the 3xTg-AD mice, phosphorylation at these sites appears in a sequential manner. Site-specific phosphorylation of tau at the AT180 and AT8 occurs before immunoreactivity with PHF-1 is observed (19). Although AT180 and AT8 immunoreactivity is apparent at 10–15 months of age, PHF-1 is only apparent at 15+ months of age. Tau accumulation is also apparent by Gallyas silver staining and Thioflavin-S at 12 months of age indicating that tau is depositing into aggregates (19). The presence of NFTs was also confirmed by electron microscopy analysis (Fig. 1). 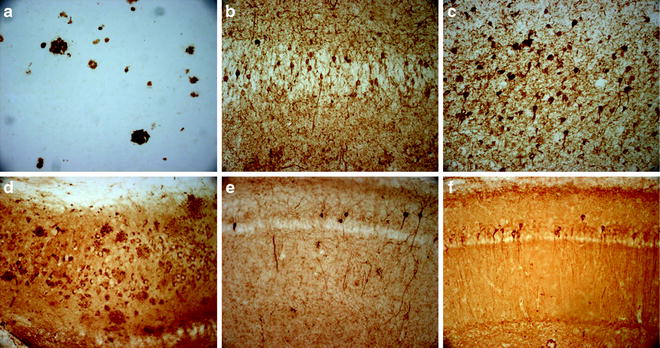 3.4 Inflammation in the 3xTg-AD Mice

Inflammation is an invariant feature of the AD brain and is believed to be in response to the accumulation of fibrillar Aβ. Reactive microglia and astrocytes localize around Aβ plaques in the AD brain (32, 33). These activated glia are believed to be phago­cytosing Aβ in an attempt to reduce pathology (34, 35). Activated microglia first appear around extracellular Aβ deposits around 12 months of age (26). The spatial and time-related appearance of activated microglia with fibrillar deposits of Aβ indicates that microglia activation may be induced by fibrillar Aβ. However, there are indications that inflammatory processes begin earlier. Elevated levels of tumor necrosis factor-α (TNFα) and monocyte chemoattractant protein-1 (MCP-1) were found in the entorhinal cortex at 6 months of age (36). Furthermore, primary microglia can be activated by monomeric and oligomeric forms of Aβ, which are present well before the appearance of extracellular Aβ deposits at 12 months (37, 38). Thus, it is likely that inflammatory processes in the AD brain occur throughout the disease process and may even contribute to the progression of the disease.
Even while activated glial cells are clearing Aβ, they are releasing various inflammatory mediators such as cytokines and chemokines that may actually be promoting pathology. Indeed, numerous cytokines have been shown to be elevated in the AD brain (39–42). These cytokines may play various roles in driving AD pathology including inducing tau phosphorylation. Cytokines have been shown to be able to induce tau phosphorylation in mice (43). Similarly, lipopolysaccharide (LPS)-induced increases in inflammation in the 3xTg-AD mice did not alter Aβ pathology, but tau phosphorylation was increased via a Cdk5-dependent mechanism (26). In addition to increases in tau phosphorylation, increased microglial activation was observed along with increases in Interleukin 1β (IL-1β). It is likely that the increased cytokines in the LPS-induced inflammatory state are responsible for the increase in tau phosphorylation. In the AD brain, Aβ accumulation induces inflammation and the subsequent increases in cytokines observed in AD brains may contribute to the development of tau phosphorylation. Thus, inflammation represents a pathway by which Aβ might induce tau pathology.

3.5 Modulation of AD Pathology in the 3xTg-AD Mice