“Assumptions can be dangerous, especially in science. They usually start as the most plausible or comfortable interpretation of the available facts. But when their truth cannot be immediately tested and their flaws are not obvious, assumptions often graduate to articles of faith, and new observations are forced to fit them. Eventually, if the volume of troublesome information becomes unsustainable, the orthodoxy must collapse.”

Determination of the mechanisms underlying acid-base disturbances has been an important clinical goal for more than 100 years. Landmark advancements in the clinical diagnosis and treatment of acid-base disturbances have included the Henderson-Hasselbalch equation (1916), the base excess (BE) concept (1960), calculation of the anion gap (AG) (1970s),41 introduction of the strong ion approach,50 and the simplified strong ion approach,5 and development of the strong ion gap (SIG) concept.6,30,32 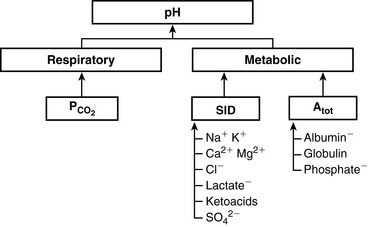 Figure 13-1 Determinants of plasma pH at 37° C as assessed by the simplified strong ion model. Both [SID+] and [Atot] provide independent measures of the nonrespiratory (metabolic) component of plasma pH.

Carbon dioxide tension can be changed by alveolar ventilation, which has a profound effect on [

] and pH. Approximately 50% of the daily variability of [

] in normal dogs can be attributed to changes in Pco2 alone. The dependent nature of the relationship between [

] and Pco2 is best appreciated by rearrangement of the Henderson-Hasselbalch equation, whereby:

with pK′a being the negative logarithm of the apparent dissociation constant for carbonic acid (H2CO3) in plasma, and S being the solubility of CO2 in plasma. Because plasma pH is vigorously defended by animals to maintain a homeostatic environment, and because values for pK′a and S are fixed at constant temperature and ionic strength, the dependence of [

] on Pco2 is clearly appreciated.

Measurement of arterial Pco2 (Paco2) provides the clinician with direct information about the adequacy of alveolar ventilation because Paco2 is inversely proportional to the alveolar ventilation. Increase in Paco2 or respiratory acidosis is caused by and synonymous with hypoventilation, whereas a decrease in Paco2 or respiratory alkalosis is caused by and synonymous with hyperventilation.

Simple ions in plasma can be divided into two main types: nonbuffer ions (strong ions or strong electrolytes) and buffer ions. Strong ions are fully dissociated at physiologic pH and therefore exert no buffering effect. However, strong ions do exert an electrical effect because the sum of completely dissociated cations does not equal the sum of completely dissociated anions. Stewart termed this difference the SID.50 Because strong ions do not participate in chemical reactions in plasma at physiologic pH, they act as a collective positive unit of charge (SID).5,50 The quantitatively most important strong ions in plasma are Na+, K+, Ca2+, Mg2+, Cl−, lactate, ß-hydroxybutyrate, acetoacetate, and

. The influence of strong ions on pH and [

] can always be summarized in terms of the SID. Changes in SID of a magnitude capable of altering acid-base balance usually occur as a result of increasing concentrations of Na+, Cl−,

], or organic anions) will cause a strong ion (metabolic) acidosis.5,50 A Gamblegram of normal plasma (Figure 13-2) shows the relationship between strong cations, strong anions, and buffer ions (

and the nonvolatile weak acids, A−). A graphic representation of SID and the AG also is shown in Figure 13-2. 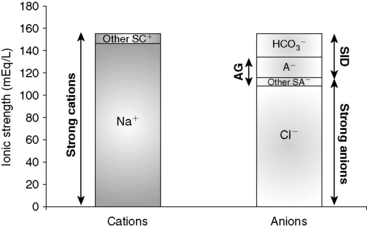 Figure 13-2 Gamblegram of normal plasma showing cations: sodium (Na+), and other strong cations (SC+) in one column, and anions: chloride (Cl−), other strong anions (SA−), net charge of nonvolatile buffers (A−), and bicarbonate (

) in the second column.

In contrast to strong ions, buffer ions are derived from plasma weak acids and bases that are not fully dissociated at physiologic pH. The conventional dissociation reaction for a weak acid (HA) and its conjugated base (A−) pair is HA ↔ H+ + A−. At equilibrium, an apparent dissociation constant (Ka) can be calculated.5,50 For a weak acid to act as an effective buffer, its pKa (defined as the negative logarithm of the weak acid dissociation constant Ka) lies within the range of pH ± 1.5. Because normal plasma pH is approximately 7.4, substances with a pKa between 5.9 and 8.9 can act as buffers. The main nonvolatile plasma buffers act as weak acids at physiologic pH (e.g., phosphate, imidazole [histidine] groups on plasma proteins). Also known as the non-

buffer system, they form a closed system containing a fixed quantity of buffer. The non-

buffer system consists of a diverse and heterogeneous group of plasma buffers that can be modeled as a single buffer pair (HA and A−). An assumption in Stewart’s strong ion model is that HA and A− do not take part in plasma reactions that result in the net destruction or creation of HA or A−. When HA dissociates, it ceases to be HA (therefore decreasing plasma [HA]) and becomes A− (therefore increasing plasma [A−]). The total amount of A, or Atot, is the sum of A in dissociated [A−] and undissociated [HA] forms, which remain constant according to the law of conservation of mass.5,50

] are changing. Frameworks adapting the strong ion approach to clinical uses also will be reviewed. The mathematical and physicochemical background of this approach is described in detail elsewhere.* A comparison of diagnostic approaches using routine screening (total CO2), the Henderson-Hasselbalch approach, and the simplified strong ion approach is shown in Table 13-1.

Because clinically important acid-base derangements result from changes in Pco2, SID, or Atot, the strong ion approach distinguishes six primary acid-base disturbances (respiratory, strong ion, or nonvolatile buffer ion acidosis and alkalosis; Figure 13-3) instead of the traditional four primary acid-base disturbances (respiratory or metabolic acidosis and alkalosis) characterized by the Henderson-Hasselbalch equation.5,7,8,13 Acidemia (decrease in plasma pH) results from an increase in Pco2 and nonvolatile buffer concentrations (albumin, globulin, phosphate) or from a decrease in SID. Alkalemia (increase in plasma pH) results from a decrease in Pco2 and nonvolatile buffer concentration or from an increase in SID. 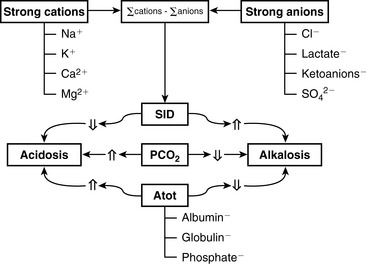 The contribution of proteins to Atot has been determined in vitro for dogs.12 The net protein charge of canine plasma at pH = 7.40 is approximately 16 mEq/L, equivalent to 0.25 mEq/g of total protein or 0.42 mEq/g of albumin. The overall effect of a 1-g/dL increase in total protein concentration is a decrease in pH of 0.047.

The contribution of proteins to Atot has been determined in vitro for cats.37 The net protein charge of feline plasma at pH = 7.40 is approximately 14 mEq/L, equivalent to 0.19 mEq/g of total protein or 0.41 mEq/g of albumin. The overall effect of a 1-g/dL increase in total protein concentration is a decrease in pH of 0.093.

The fact that hypoalbuminemia tends to increase pH and cause metabolic alkalosis was first identified in people in 1986 by McAuliffe et al.36 Phosphate is quantitatively the second most important component of [Atot] and normally is present in plasma at a low concentration (<4 mmol/L). Therefore hypophosphatemia is not a clinically important cause of nonvolatile buffer ion (metabolic) alkalosis. Globulin is quantitatively the third most important component of [Atot]; however, decreases in plasma globulin concentration usually accompany decreases in plasma albumin concentration. In other words, nonvolatile buffer ion alkalosis in dogs and cats is usually due to hypoalbuminemia.

The effects of a decrease in Atot (Atot alkalosis) on [

] are shown in a Gamblegram in Figure 13-4. Hypoproteinemic alkalosis has been identified clinically in dogs and cats.18,32,52 In vitro, a 1-g/dL decrease in albumin concentration is associated with an increase in pH of 0.093 in cats37 and 0.047 in dogs.12 The increase in pH secondary to hypoalbuminemia should result in ventilatory compensation (hypoventilation) or a decrease in SID because plasma pH is vigorously defended and any deviation in pH from the optimal range for a given core temperature will be energetically inefficient. Data are not currently available regarding the presence or absence of ventilatory compensation for nonvolatile buffer ion alkalosis in dogs or cats. However, compensatory hypoventilation and increased Pco2 have been documented in human patients with hypoalbuminemic alkalosis.32,36 In contrast, hyperventilation and decreased Pco2 were identified in humans with congestive heart failure and cirrhosis, although it is likely that hyperventilation may have been induced by the underlying diseases and not by the metabolic acid-base disorder.45 Metabolic compensation with decreased SID caused by an increase in chloride concentration occurs in human patients with hypoproteinemic alkalosis.36,54 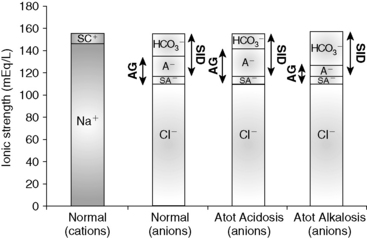 The most common causes of hypoproteinemic alkalosis are shown in Box 13-1. Hypoalbuminemic alkalosis is common in the critical care setting.22 Presence of hypoalbuminemia complicates identification of increased unmeasured anions (e.g., lactate, ketoanions) because hypoproteinemia not only increases pH but also decreases AG.20,24,28 Thus the severity of the underlying disease leading to metabolic acidosis may be underestimated if the effects of hypoalbuminemia on pH, [

], and AG are not considered. Calculation of the SIG is therefore preferred in dogs and cats with hypoalbuminemia because hypoproteinemia will not alter the SIG. Treatment for hypoalbuminemic alkalosis should be directed at the underlying cause and the decreased colloid oncotic pressure.

Changes in SID usually are recognized by changes in [

], BE, [Na+], or [Cl−] from their reference values. It is important to understand that the change in SID from normal is equivalent to the change in [

] or BE from normal whenever the plasma concentrations of nonvolatile buffer ions (albumin, phosphate, globulin) are normal.7 In other words, the Henderson-Hasselbalch and strong ion approaches are equivalent whenever plasma albumin, phosphate, and globulin concentrations are within their reference ranges. It is also important to realize that the sodium-chloride difference ([Na+] – [Cl−]) provides a clinically valuable index of SID, particularly in animals that do not have hyperlactatemia.

There are three general mechanisms by which SID can increase, leading to metabolic alkalosis: an increase in [Na+], a decrease in [Cl−], or a decrease in plasma free water, which occurs commonly in dehydration. Strong cations other than sodium are tightly regulated, and changes of a magnitude that could affect SID clinically either are not compatible with life or do not occur. Conversely, chloride is the only strong anion present in sufficient concentration to cause an increase in SID when its concentration is decreased. Common causes of SID alkalosis are presented in Box 13-2.