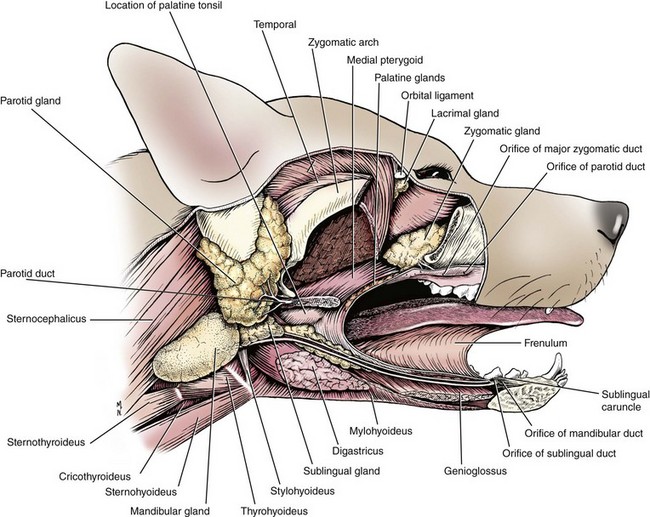 Figure 88-1 Lateral view of a dog head illustrating the location of the major salivary glands. (From Evans HE, de Lahunta A: Miller’s anatomy of the dog, ed 4, St Louis, 2013, Saunders/Elsevier.)

The parotid gland is a triangular-shaped gland positioned superficial to the vertical ear canal (see Figure 88-1) It is bordered rostrally by the masseter muscle and the temporomandibular joint, caudally by the sternomastoideus and cleidocervicalis muscles, ventrally by the mandibular salivary gland, and superficially by the parotidoauricularis and platysma muscles.16 It is covered by a thin capsule that blends imperceptibly with deeper surrounding structures, including, but not limited to, the facial nerve, maxillary and temporal arteries, internal maxillary vein, and regions surrounding the external acoustic meatus and the stylomastoid foramen.16 The intimate association of the parotid capsule and gland with surrounding structures creates a challenging dissection for complete removal of the parotid salivary gland.

The parotid duct is formed by two or three converging ductules on the ventrorostral border of the gland. It travels over the lateral aspect and ventral third of the masseter muscle and opens into the oral cavity through a small papilla at the level of the upper fourth premolar. An accessory parotid gland, in the form of glandular lobules, is commonly found dorsal to the parotid duct. This tissue empties directly into the main parotid duct through several small communications.16

The zygomatic gland (also known as the dorsal buccal gland) is located in the periorbital area just ventral and rostrolateral to the globe and medial to the zygomatic arch (see Figure 88-1).16,39 One major and up to four minor salivary ducts are sent from the zygomatic gland into the oral cavity.16 The major duct opens into the oral cavity at the caudal aspect of the last upper molar. Typically, the zygomatic papilla is about 1 cm caudal to the parotid salivary papilla. The zygomatic salivary gland is supplied by a branch of the infraorbital artery and drained by the deep facial vein. Its efferent lymphatics drain to the medial retropharyngeal lymph node.31

Mandibular and sublingual salivary glands are intimately associated and thus considered anatomically as a pair.

The mandibular salivary gland is a large, palpable gland located caudomedially to the angle of the mandible (see Figure 88-1). It lies on the medial aspect of the junction of the linguofacial and maxillary veins. The mandibular lymph nodes lie on its ventral surface and the medial retropharyngeal lymph node and larynx on its medial surface. Its cranial border abuts the primary portion of the sublingual salivary gland. These two glands share a common capsule and can initially look like a single gland (Figure 88-2). The mandibular salivary duct exits the gland on its medial surface and continues rostrally, medial to the sublingual salivary gland and horizontal ramus of the mandible (see Figures 88-1 and 88-2). Under the oral mucosa, it travels between the styloglossus and mylohyoideus muscles until it exits into the oral cavity at the sublingual caruncle lateral to the lingual frenulum.16 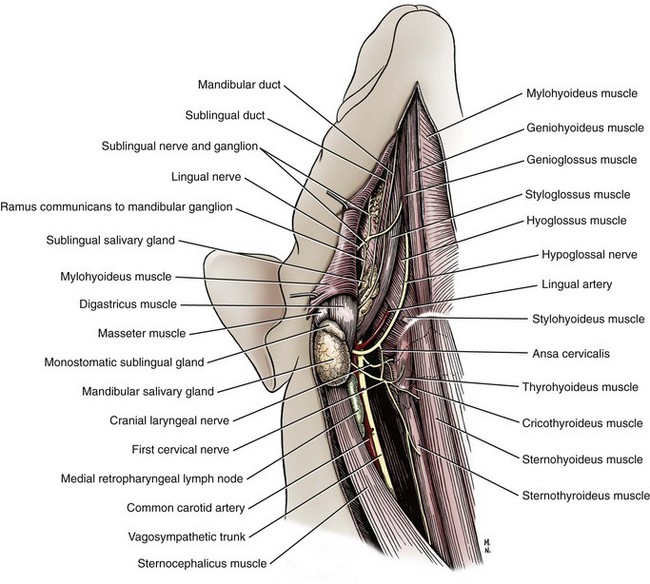 Figure 88-2 Ventral view of a dog head illustrating the pathway of the mandibular and sublingual salivary gland and duct complex. (From Evans HE, de Lahunta A: Miller’s anatomy of the dog, ed 4, St Louis, 2013, Saunders/Elsevier.)

The major blood supply of the mandibular salivary gland originates from the glandular branch of the facial artery and drains into a branch of the lingual vein. Other small arteries and veins may be present. Lymphatics drain into the medial retropharyngeal lymph nodes.16

The minor salivary glands are typically small collections of salivary tissue surrounding the oral cavity that drain their secretions directly into the oral cavity to keep it moist.2 These glands include the buccal, labial, lingual, tonsillar, palatine, and molar.49 The molar gland is well developed in cats and is located just deep to the buccal mucosa at the angle of the mandible.12 Salivary gland disease is rarely reported with the minor salivary glands.9,42,54

Salivary glands in dogs and cats produce saliva that primarily functions to lubricate ingesta and facilitate packaging of a food bolus for its passage down the esophagus.1,19 Other functions of saliva include thermoregulation (evaporative cooling), oral cavity cleansing, buffering of weak acids, reduction of oral bacterial growth, and protection of surface epithelium in the oral cavity.26,29 Unlike in other species, salivary α-amylase in dogs and cats does not play a significant role in carbohydrate digestion.1

Microscopically, saliva travels through an intricate pathway before its excretion into the oral cavity. The acinus, or the terminal salivary gland unit, produces saliva that travels into the intercalated ducts. These ducts coalesce to form the intralobular ducts, which flow into interlobular ducts, lobular ducts, lobar ducts, and finally the major excretory ducts.49 Histologically, most salivary glands consist of a combination of serous and mucus-producing cells. Whereas secretions from the parotid and mandibular gland are generally more serous in nature, those from sublingual and zygomatic glands have a higher proportion of mucus.16,19

Saliva undergoes two phases before excretion into the oral cavity. Phase one begins with production of saliva within the acinus. The acinar cells absorb Na+, which helps to draw water in, creating sodium-rich saliva.1,13,19 After the saliva flows into the collecting ducts, phase two begins, with active reabsorption of Na+ and secretion of HCO3– and K+.1,13,19 This process occurs mainly in the intralobular duct epithelium, which is formed by tall columnar epithelial cells.49 The resultant saliva excreted into the oral cavity is rich in HCO3– and K+.20

Sialadenosis is a noninflammatory swelling of the salivary glands, most commonly affecting the mandibular salivary glands.50 The cause is unknown. Clinical signs in dogs include wretching, gulping, lip smacking, hypersalivation, and weight loss. Affected glands are enlarged but are usually nonpainful. Histologically, affected glands show minimal to no changes.45,50 Esophageal abnormalities are occasionally identified in conjunction with sialadenosis.50,53 Signs of sialadenosis have also been reported in cats.5

The diagnosis of sialadenosis is usually based on exclusion of other causes. Clinical signs are not alleviated by glucocorticoids, antibiotics, or surgical removal of the affected gland(s). Treatment with 1 to 2 mg/kg of phenobarbital twice a day, however, may improve clinical signs within 1 to 2 days.6,53 A response to phenobarbital and detection of abnormalities on electroencephalography may support a diagnosis of limbic epilepsy.50 Recurrence of clinical signs after cessation of medical management is possible; therefore, lifelong phenobarbital therapy may be required.6,53

Salivary glands can develop inflammation (sialadenitis) that occasionally progresses to glandular necrosis and ductal metaplasia. Sialadenitis and necrotizing sialometaplasia have clinical signs very similar to sialadenosis, with the addition of pain upon palpation of the affected glands and vomiting. Terrier breeds seem to be predisposed to these conditions.7,8,11,53 Because cytologic changes can be confused with inflamed, neoplastic glands, the diagnosis is based on histologic findings of lobular necrosis, inflammation, squamous metaplasia, infarction, and hypertrophy of ductal epithelium.7,11,45

Because esophageal or gastrointestinal disease has been identified concurrently with necrotizing salivary gland disease, some have theorized a possible link to hyperstimulation of the vagus nerve, resulting in a neural reflex syndrome similar to that seen with hypertrophic osteopathy except that the salivary glands are the efferent target organ instead of the periosteum.40 Response to phenobarbital has also been reported, however, which supports limbic epilepsy as a potential cause.7,53 Surgical removal of the affected salivary gland(s) and medical management with steroids and antibiotics alone do not resolve the clinical signs.7,50 Therefore, treatment should be focused on addressing any esophageal disease present as well as a trial of phenobarbital (see Sialadenosis).

Sialoceles, also termed salivary mucoceles, are collections of saliva within subcutaneous tissue. Resultant saliva-filled cavities are lined by inflammatory connective tissue and are not true cysts. The most common source of saliva is leakage from the sublingual salivary gland or duct, but origination from any gland is possible.18,27,48 Sialoceles have reportedly been caused by trauma, sialoliths, foreign bodies, and neoplasia; however, the majority have an unknown cause.18,37 Poodles, German shepherds, Australian silky terriers, and dachshunds may have a predisposition; no sex predisposition has been consistently identified.4,18,27,32,55

The location of the sialocele often determines the presenting complaint and indicates the offending gland. The four main presentations are exophthalmos (zygomatic sialocele, Figure 88-3); labored breathing (pharyngeal sialocele; Figure 88-4); dysphagia (sublingual sialocele or ranula; Figure 88-5); and, most commonly, intermandibular or cranioventral cervical swelling (cervical sialocele; Figure 88-6, A). Diagnosis of sialoceles is usually based on clinical signs of a fluid-filled mass that contains a viscous, clear or blood-tinged fluid (Figure 88-6, B) on aspirate. On cytology, aspirated fluid contains small to moderate numbers of nondegenerate nucleated cells and diffuse or irregular clumps of homogenous pink- to violet-staining mucin. Macrophages may contain abundant, foamy cytoplasm. 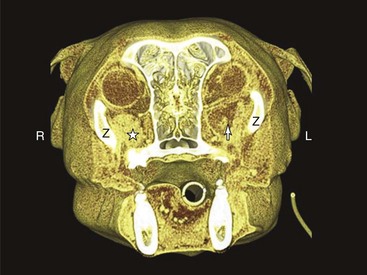 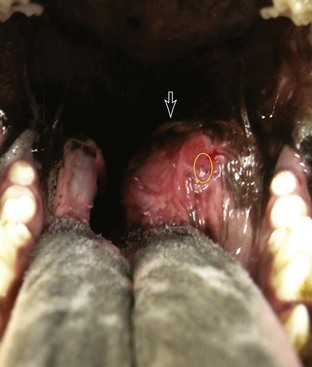