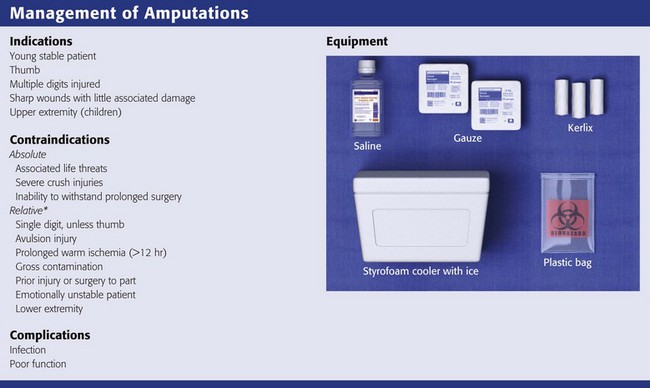 “The first person caring for an injured hand will probably determine the ultimate stage of its usefulness.”1 Consequently, rapid and appropriate emergency care of a patient with an amputated part is crucial to the salvage and preservation of function. This chapter discusses the acute care of amputated parts before they are replanted and specifically addresses the management of distal digit amputations and dermal “slice” wounds.

Amputation may be partial or complete. Injuries with any interconnecting tissue between the distal and proximal portions, even if it is only a small piece of bridging skin, are considered incomplete (or partial) amputations. Complete amputations are replanted, whereas partial amputations are revascularized. This distinction is arbitrary; for emergency clinicians, treatment of both injuries is very similar. The prognosis and outcome of both types of amputations are similar, although partial amputations often have better venous and lymphatic drainage and functional recovery may be more complete if there is less anatomic damage.

The media has somewhat exaggerated the success of replantation and has often generated unrealistic expectations from the public. The technical limitations of successful repair of vessels that are less than 0.3 mm in diameter usually preclude replantation of digits distal to the distal interphalangeal (DIP) joint.7 Successful revascularization of amputated parts often ensures viability, but neurologic, osseous, and tendinous healing is critical for ultimate function. If there is incomplete neurologic recovery, limited range of motion, and intolerance to cold, the replanted part may have little functional value for the patient. Rehabilitation from replantation surgery may be prolonged, with more than 1 year often required, as well as repeated surgical procedures. The emergency clinician should be aware of the limitations of replantation surgery and should not encourage unrealistic expectations in injured patients or their families.8

The possibility of restoring viability and function to traumatically severed parts has fascinated clinicians for centuries. Clinicians have attempted to replant parts with little more than a few sutures and secure bandaging and have occasionally had spectacular results. One of the earliest medical reports was by Fioravanti,9 who in 1570 reported successful replantation of a soldier’s nose that had been severed by a saber. He first cleansed it with urine and then carefully bandaged it. In 1814, Balfour10 reported successful replantation of a finger that was severed with a hatchet by using only meticulous alignment and secure bandaging.

The ability to consistently replant amputated parts awaited the development of modern microvascular surgical techniques. The first reported successful upper limb replantation was by Malt and McKhann in 1962.11 Later that year, Chen and Pao12 reported successful replantation of a hand and arm. Developments in microsurgical techniques, advanced optics, and microsurgical instruments have created the ability to consistently replant amputated parts with a high degree of success. Since 1965, when Kleinert and Kasdan13 reported the first successful microvascular anastomosis of a digital vessel, several large series of replantations have reported success rates ranging from 70% to 90%.5,6,14–20 To the original pioneers in replant surgery, survival of the replanted tissue was the criterion for success, but with further technological and surgical refinements, today’s surgeons emphasize functional recovery as well as viability. Replantation of a part that is painful or useless or that interferes with function is a disservice to the patient and is less desirable than early restoration of function without replantation.21,22

Preservation of the amputated part is generally indicated whenever there is a potential for replantation or revascularization. Revascularization and reanastomosis of partially and completely amputated parts should be provided when there is hope of preservation or restoration of function. Aesthetic considerations, patient avocations, and occasionally the patient’s religious or social customs may also influence the decision to proceed with surgery.21,23,24 In the end, the microsurgical team and patient must reach the decision together after a rational explanation of the potential results and successes.

Indications for replantation of fingers and hands have been proposed and are generally accepted, although they should not be applied rigidly in all circumstances. Successful functional recovery is more likely with distal than with proximal extremity amputations and more likely with multidigit amputations, single-digit thumb amputations, or transmetacarpal amputations.25 Generally, these are the indications for replantation (Review Box 47-1). Single-digit amputations that are both proximal to the DIP joint and distal to the flexor digitorum superficialis may be replanted successfully with good functional recovery (Fig. 47-1). 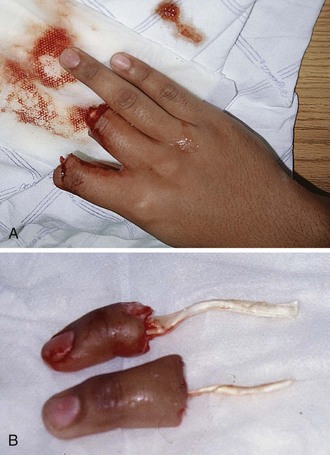 Figure 47-1 A and B, Single-digit amputations are not usually replanted unless the thumb is involved. This sharp amputation with little associated damage in a 20-year-old may qualify, but it is best to discuss this with the hand surgery team before giving unrealistic expectations to the patient, who may anticipate a normal result by simply “sewing it back on.” Avulsion of the tendons proximal to the amputation greatly complicates this case.

Successful replantations have been reported in patients from the ages of 7 months to 84 years.26,27 There are no fixed age limits for replantation, although particularly good functional results have been reported in children because of their regenerative capacity and adaptability to rehabilitation.2,28,29 The decision to replant is made on a case-by-case basis by the microsurgical team, who must weigh all the factors involved.

Severe extremity trauma is a significant cause of morbidity, and the potential for successful replantation in terms of survival, as well as useful function, is directly related to the mechanism of injury. Guillotine-type injuries are the least common but have the best prognosis because of the limited area of destruction. Crush injuries are the most common but produce more tissue injury and therefore have a poorer prognosis. Avulsion injuries have the worst prognosis because a significant amount of vascular, nerve, tendon, and soft tissue injury invariably occurs.2,4–6,30

The time that an amputated part can survive before replantation has not been determined. After 6 hours, additional delay may decrease the success rate of revascularization and lead to diminished function. Skin, bone, tendons, and ligaments tolerate ischemia much better than do muscle and connective tissue. As a general rule, the more proximal the amputation, the less ischemia time that the amputated part can tolerate. Attempts to extend viability during ischemia have shown that the most important controllable factor is the temperature of the amputated part. Warm ischemia may be tolerated for 6 to 8 hours.31 When the part is cooled properly to 4°C, 12 to 24 hours of ischemia may be tolerated with distal amputations.2,4,6,14,15,32 There is a report of successful digital replantation after 33 hours of cold ischemia.33 Hypothermia limits the metabolic demand of tissues, thereby preserving intracellular energy and reducing the production of toxic metabolites caused by ischemia.33–36 It also retards the development of acidosis37 and may prevent the no-reflow phenomenon that can follow ischemic and low-flow states.21,33,34,38

Delay in replantation of proximal arm and leg amputations containing significant amounts of muscle tissue can lead to the buildup of toxic products. In such cases, when the blood supply is restored, the absorbed toxins have been reported to cause respiratory failure, renal failure, cardiovascular collapse, and even death.21,24,33,34,39–42

Intraoperative perfusion techniques such as those used for organ transplants to extend anoxic time are being used to help cool amputated parts before replantation. However, emergency clinicians should not attempt perfusion because the risk of damaging vessels, as well as the potential delay in care and rapid transport, overrides the theoretical benefits of cold perfusion in the emergency department (ED).21,43

Assessment of the Patient

The initial care and treatment of a patient who has had a body part amputated are the same as those for any trauma patient. The amputated extremity or the excitement of others must not distract the clinician from assessing and stabilizing the patient’s airway, breathing, and circulation. Amputations are not generally life-threatening injuries, and other potentially more serious injuries must first be assessed and treated. Hemorrhage from completely amputated limbs is often limited by the retraction and spasm of severed vessels. Partial amputations may result in more serious hemorrhage than if the vessels were totally severed. Control hemorrhage with direct pressure and elevation. Avoid using vascular clamps and hemostats in the ED when possible. A proximally placed blood pressure cuff inflated 30 mm Hg above systolic pressure can be used for short periods (<30 minutes) to control severe bleeding, if necessary.

After the initial primary assessment and treatment and subsequent stabilization of the patient, care of the stump and amputated part can be initiated safely. In addition to the general history obtained from all trauma patients, focus attention on the exact mechanism of injury, the time and duration of the injury, handedness, allergies, medications, illness, previous injury to the affected part, care of the stump and amputated part before arrival in the ED, occupation, avocations, and tetanus history.

Initiate tetanus prophylaxis and broad-spectrum systemic antibiotic therapy (e.g., cephalosporins). Intravenous opioids are usually required for pain; titrate the dose to the clinical condition. With fingertip amputations, digital or regional nerve blocks are ideal for pain relief but may make functional and neurologic evaluation by a consultant impossible (see Chapters 31 and 32). Aspirin, low-molecular-weight dextran, or both have been administered in an attempt to maintain small-vessel perfusion44 but have not proved beneficial in the ED management of these injuries.

Patients who have suffered an amputation often experience denial, shock, disbelief, and feelings of hopelessness about their injury; some have even become suicidal. Treat patients with supportive and realistic reassurance, and avoid unrealistic medical promises. It is important that the emergency clinician (or other non-replantation specialist) not speculate on the specifics of the ultimate prognosis.

Examination of the stump may be brief and should primarily be an assessment of the degree of damage to surrounding tissue (Fig. 47-2). Remove gross contamination by irrigating with normal saline. Do not use local antiseptics, especially hydrogen peroxide or alcohol, because they may damage viable tissue. Similarly, tissue should not be manipulated, clamped, tagged, or further traumatized in any way. Assess the degree of contamination, the level of the injury, and any concomitant injury. Examine the amputated part for the degree of tissue injury, level of contamination, and the presence of distal injuries. Obtain radiographs of the amputated part and proximal stump that include at least one joint proximal to the injury site (see Fig. 47-2B). If not already done, obtain preoperative laboratory studies and intravenous access in an uninjured extremity. 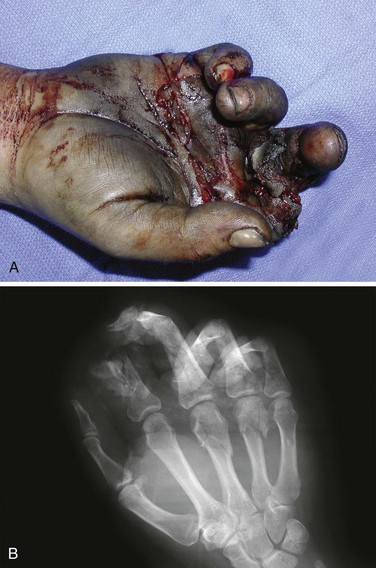 Figure 47-2 A, Blast injury resulting in amputation. Remove gross contamination by irrigating with normal saline. Avoid using antiseptics because they may damage viable tissue. Assess the degree of contamination, the level of the injury, and any concomitant injury. B, Obtain radiographs of the amputated part (if available) and the proximal stump to include at least one joint proximal to the injury site. (Courtesy of Stephen Pap, MD.)