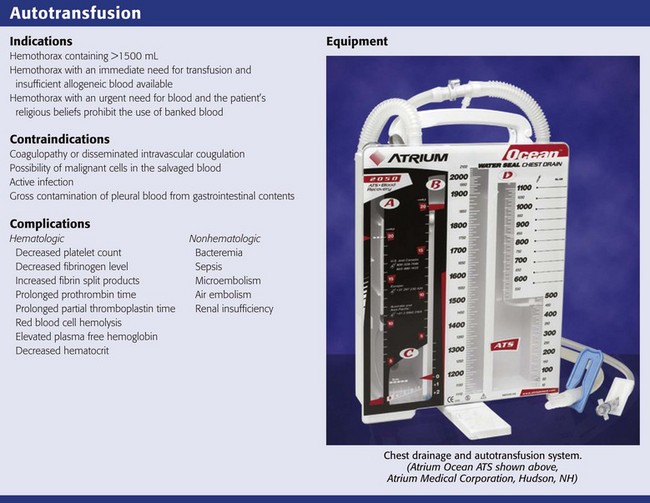 Autologous blood transfusion, or autotransfusion, is the collection and reinfusion of a patient’s own blood for volume replacement.1 Preoperative blood banking and intraoperative cell salvage techniques have increased in a multitude of surgical specialties.2–7 Autotransfusion in the emergency department (ED) is usually limited to patients with severe, traumatic hemothorax and clinically significant blood loss.

Autotransfusion is usually performed in trauma centers or in EDs with high trauma volume. Though not a uniform standard of care, it is applicable to any ED. Since the procedure requires familiarity with the equipment, continuing education, and quality control, it may be counterproductive to institute it in a hospital that has a low trauma census or in a setting in which it will be used infrequently enough that staff education issues are problematic. Clinicians practicing in more austere environments with a paucity of clinical resources, such as combat and disaster zones, may find that the procedure’s benefits outweigh its risks.8–10

The discovery of ABO blood typing at the turn of the century and the institution of blood banks in the 1930s led to the almost exclusive use of allogeneic (homologous) blood up to and following World War II. During the 1960s and 1970s, cardiopulmonary bypass surgery and combat trauma experience during the Vietnam War generated extensive data regarding intraoperative retrieval of large quantities of blood for reinfusion.14–17 This revitalized interest, coupled with increased experience in surgical, trauma, and combat situations, has thus initiated a new era in autotransfusion.

Hemothorax refers to a collection of blood within the pleural space. Severe hemorrhage is more often associated with laceration of vessels on the inside of the chest wall, such as the internal mammary and intercostal arteries. Blunt trauma and penetrating trauma are by far the most common causes of hemothorax. Spontaneous hemothorax can occur secondary to intrathoracic malignancy,18 pulmonary infarction, bullous emphysema, virulent pulmonary or mediastinal infection, vascular malformation, and endometriosis of the pleura (catamenial).19

The pathophysiologic sequelae of hemothorax include both hemodynamic instability and respiratory compromise. The pleural cavity can accommodate more than 50% of the total blood volume, so clinically significant intrathoracic blood loss can occur with minimal external signs of bleeding. The clinician should suspect hemothorax in the setting of chest trauma with clinical signs of hypovolemia. Physical examination may demonstrate decreased breath sounds and reduced tactile fremitus. Imaging during the initial resuscitation period is usually limited to supine chest radiographs, which may show haziness in the affected lung field as blood layers in the posterior pleural space (Fig. 27-1). Ultrasound is also useful in the initial evaluation of hemothorax (Fig. 27-2).20 Tube thoracostomy is the treatment of choice for acute hemothorax, with thoracotomy and video-assisted thoracic surgery performed as indicated for severe or ongoing hemorrhage. 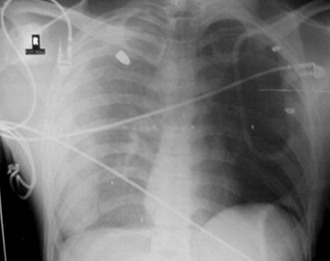 Figure 27-1 Hemothorax secondary to a gunshot wound. Note the haziness over the right hemithorax with the bullet seen in the right upper lobe. In this supine radiograph the volume of the hemothorax may not be fully appreciated. (From JA Marx. Rosen’s Emergency Medicine. 7th ed. St. Louis: Mosby; 2009.) 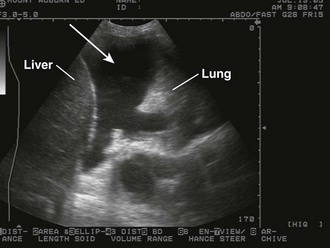 Figure 27-2 Ultrasonographic appearance of hemothorax. Blood in the pleural cavity appears anechoic (arrow) and is easily seen interspersed between the collapsed lung and diaphragm.

Shed blood from traumatic hemothorax is immediately available for rapid transfusion. The blood is normothermic and compatible, which avoids the risk of allergic reaction or infection from transfusion transmissible diseases. There are numerous transfusion transmissible diseases, including viruses such as human immunodeficiency virus and hepatitis, bacteria, parasites, and most recently reported, variant Creutzfeldt-Jakob disease.21,22 Although the risk for transfusion transmissible diseases has decreased dramatically in developed countries, it is still very problematic worldwide.23 Immunologic transfusion reactions and posttransfusion sepsis continue to be risks as well.24 In trauma patients, allogeneic transfusions have been shown to be an independent risk factor for infection,25–28 which may be dose dependent and independently associated with increased morbidity and mortality.28–30 In patients whose religious convictions (e.g., Jehovah’s Witness) prohibit transfusions with homologous blood, reinfusion of autologous blood that does not involve blood storage may be an acceptable alternative.31

1. Immediately available—no delay in crossmatching and no storage required

2. Blood compatibility and allergic reaction not an issue

4. No risk for transfusion transmissible disease

5. No risk for hypocalcemia or hyperkalemia36,37

7. Higher levels of 2,3-diphosphoglycerate than in banked red blood cells38

8. Decreased use of banked blood; more available for subsequent patients in need34

10. May be acceptable to religions opposed to homologous blood transfusions36,39,40

11. May be a valuable alternative to banked blood in developing countries where infected donor blood is a problem

In general, all victims of severe trauma, whether blunt or penetrating, should be considered potential candidates for autotransfusion. Several categories of patients for whom emergency autotransfusion is suitable have been described and are summarized in Review Box 27-1. Reul and associates described the ideal autotransfusion candidate as a blunt or penetrating trauma victim with hemothorax consisting of 1500 mL or more of blood.41 Other patients who may benefit include those with an immediate need for transfusion for whom insufficient homologous blood is available (because of a shortage or a difficult crossmatch) and those whose religious convictions prohibit homologous transfusion.36,39,40

In some situations emergency autotransfusion may pose more risk than benefit. Coagulopathy and disseminated intravascular coagulation (DIC) are important contraindications.8,42 Others include active infection, gross contamination, and the possibility of malignant cells in the salvaged blood.43 With direct autotransfusion of pleural blood through a microfilter, the risk of reinfusing tumor cells is unknown. However, recent work using perioperative cell salvage suggests that the risk for dissemination of malignant disease is minimal.44 Concerns regarding gross contamination from concomitant gastrointestinal tract injury have also been disputed.45 An early study of autotransfusion before cell washing was implemented found that despite reinfusion of massively contaminated blood, 17 of 25 patients survived without evidence of septic complications.46

Recent work on contamination involving cell salvage systems incorporates a cell-washing step.47,48 Several investigators believe that reinfusion of limited amounts of contaminated blood from the peritoneal cavity may now be accomplished with acceptable risk. Nonetheless, the current consensus is that exsanguinating hemorrhage without available homologous blood is the only acceptable indication for autotransfusion when there is recognized intestinal contamination.49–51 Concurrent use of systemic antibiotics is advised.8,9,47,48,51,52

Autotransfusion should be performed within 4 to 6 hours from the time of injury,37,53 although it has been performed after this period in combat situations without significant complications.8,48

In-line filtration is used routinely during reinfusion of blood products to reduce the danger of microembolization and resultant pulmonary insufficiency.1,37,53 The relationship between the presence of microaggregates and the development of acute respiratory distress syndrome is controversial.1 However, most investigators advise the use of a micropore filter with pore size recommendations ranging from 20 to 170 µm.54–56 The majority of investigators believe that a pore size of 40 µm minimizes the risk for microembolization without undue elevation in filtration pressure.41,57,58 The manufacturers of the commercial devices discussed in this chapter also recommend at least a 40-µm filter size.

The level of vacuum suction should be limited to minimize hemolysis of red blood cells.58 The precise level at which clinically significant hemolysis occurs is uncertain, and there is wide variation (5 to 100 mm Hg) in recommendations.14,41,55,59–61 Several commercial products recommend a starting vacuum pressure of 20 mm Hg.62

Blood retrieved from the pleural and abdominal cavities frequently will not clot because it is devoid of fibrinogen.63 This is believed to be due to the fact that moderate rates of bleeding allow time for defibrination by contact with the serosal surfaces and by mechanical agitation from respiratory and cardiac movement. For this reason, some recommend simple reinfusion through a filter without any anticoagulant.17,54,60,64 However, wounds of the great vessels may bleed at a rate that allows coagulable blood to enter the collection reservoir and clot the entire system.52,60,61 In the ED setting where autotransfusion is indicated for rapid blood loss, anticoagulation is recommended.

The use of heparin as an anticoagulant in trauma patients is not recommended by the manufacturers of autotransfusion devices.62 Heparin anticoagulation is possible; however, local heparinization of the tubing and reservoir may lead to the formation of platelet microaggregates on the filter and in the line, as well as increase the risk for systemic heparinization.41,65

Citrate compounds, an alternative to heparin, are frequently recommended for autotransfusion.42 Citrates bind with the calcium ion and prevent conversion of protein fibrinogen into insoluble fibrin, which would cause the blood to clot. Because citrate binds only with calcium, it anticoagulates just the blood in which it is dissolved. Once the anticoagulated blood is infused, citrate is rapidly metabolized by the liver. Early studies used acid citrate dextrose (ACD).37 More recently, citrate phosphate dextrose (CPD) has been used because it necessitates less volume as an anticoagulant and results in less acidosis than ACD.41,66,67 Rarely, excessive use of CPD can cause cardiac dysrhythmias.41 Moreover, use of insufficient or outdated CPD may result in clotting of collected blood. Baldan and colleagues described the use of simple autotransfusion in more than 200 patients with penetrating chest injuries and recommended using half-dose citrate phosphate dextrose adenine (CPDA) solution.9 Although anticoagulant therapy and dosage recommendations are at the discretion of the physician, commercially available devices do offer some general guidelines (Table 27-1). 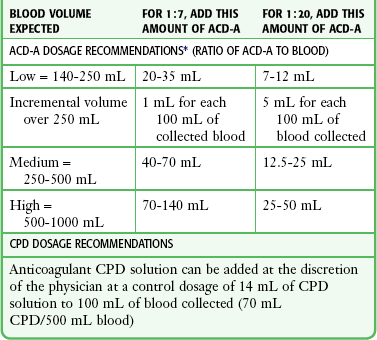 *Dosage ratios are approximate. Note that 35 mL of ACD-A provides a 1:7 ratio of ACD-A to blood for low volume and a 1:20 ratio for high-volume blood and may be a good starting point if it is unclear how much blood will accumulate.

Before purpose-built systems were available, autotransfusion was possible by using common items available in most EDs. These techniques have not been as widely tested and are more appropriate for use in dire situations, such as may occur in a disaster or on the battlefield.9

Symbas described a simplified collecting system involving a standard chest tube bottle.68 More than 400 patients were autotransfused via this method with no adverse effects attributable to the procedure. After insertion of a chest tube, blood was collected into a standard bottle containing 400 mL of normal saline, with suction maintained at 12 to 16 mm Hg. The blood collected in the chest bottle can be reinfused in one of two possible ways as shown in Figure 27-3. Improvements on his historical technique, such as the addition of anticoagulation and blood filters, should be considered. 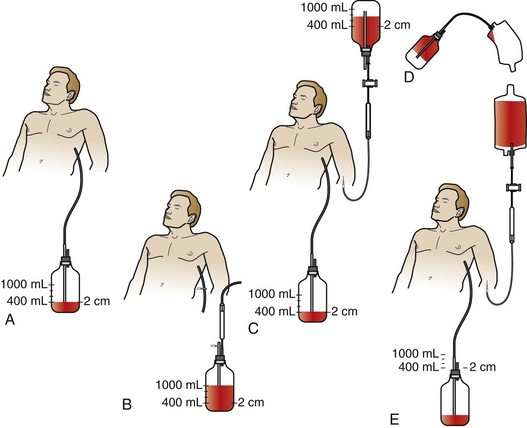 All the commercially available autotransfusion systems (ATSs) are based on the same three-stage system (called the “three-bottle system”) for collection of pleural fluid (Fig. 27-4). Currently used devices incorporate the three-bottle system into one unit. Stage 1 is the collection of pleural fluid (blood). Stage 2 is the water seal stage, in which water acts as a one-way valve (water seal) that allows air to be sucked out of the pleural space but not leak back in. Stage 3 is the suction control stage, which is essentially a safety stage so that if the degree of suction suddenly increases beyond the set point, the system will pull air from the atmosphere instead of inappropriately increasing suction in the pleural cavity. Historically, water was (and still frequently is) used in the suction control stage. 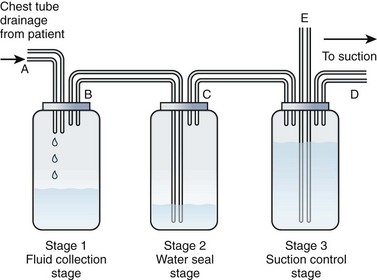 The disadvantage of using water in stages 2 or 3 is that if the device is knocked over, loss of the water seal and spillage of water from the suction control stage can occur. Newer designs have solved this problem, and two systems currently available do not use water (Atrium Express and Pleur-evac Sahara). These newer devices use a one-way valve instead of a water seal in stage 2 and a pressure regulator instead of water in the suction control stage (stage 3). Table 27-2 describes features of several of the more commonly used devices. 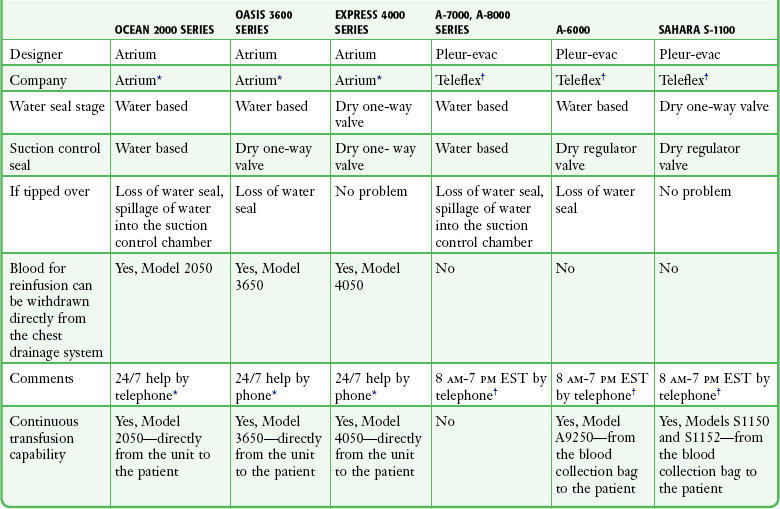 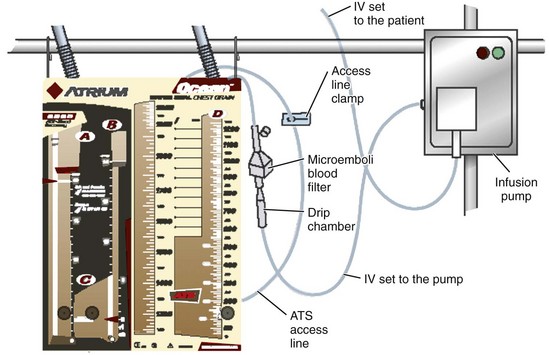