Mode of Transmission: Direct contact with virus in feces and vomitus and contaminated fomites.

Human Health Significance: FPV is not known to infect humans, but was isolated from a monkey.

Feline panleukopenia virus (FPV) is a parvovirus that causes enteritis and panleukopenia in domestic and wild cat species worldwide.2 It has also been associated with disease in raccoons, mink, foxes, and a monkey, and can replicate in ferrets without causing disease. Feline panleukopenia is sometimes confusingly referred to as “cat plague” and “feline distemper.” FPV is a small, single-stranded non-enveloped DNA virus that is closely related to CPV-2, but in contrast to CPV-2, which emerged in the late 1970s, the existence of FPV has been known since the 1920s.1 FPV has the same ability as CPV-2 to survive long periods in the environment and resist disinfection, and has the same preference for replication in rapidly dividing cells (see Chapter 14).

Feline panleukopenia is most likely to occur in cats younger than 1 year of age, but it can occur in unvaccinated or improperly vaccinated cats of all ages. The median age of affected cats in one study was 4 months, and when disease occurred in vaccinated cats, it occurred only in cats that had not received a booster vaccine after 12 weeks of age.3 However, kitten deaths have been reported in households of fully vaccinated kittens, possibly because of exposure to large amounts of virus in the environment.4 Outbreaks of panleukopenia in cats correlate seasonally with increases in susceptible newborn kitten numbers. Panleukopenia occurs most commonly in multicat households, and especially in enclosed, shelter environments. It can also occur in cats with outdoor exposure, such as barn, feral, and stray cats. In one study, the prevalence of protective antibody titers to FPV in feral cats in Florida was only 33%, which suggested a low rate of exposure to the virus.5 In some North American shelters, devastating outbreaks of panleukopenia have led to euthanasia of large numbers of cats. Contact with other cats may not be present in the history, because fomite transmission is so effective.3 FPV replicates to a limited extent in dogs, without disease or virus shedding. Some feline panleukopenia results from infection of cats by the related mink enteritis virus, CPV-2a, CPV-2b, or CPV-2c.6–8 Mixed infections with FPV and CPV-2 variants have been detected in cats, and there is evidence for recombination between FPV and CPV-2 variants.7,9 Infection of cats with CPV-2 variants is uncommon in Europe but predominated among cats with panleukopenia in Asia.10

Other viral pathogens that have been associated with gastroenteritis in cats include feline enteric coronavirus (see Chapter 20), FeLV, rotaviruses, caliciviruses, reoviruses, and astroviruses. A torovirus-like agent has been associated with a syndrome of diarrhea and protrusion of the nictating membranes in cats.11 Togavirus-like and picornavirus-like particles have been identified in the feces of Australian cats, but their significance is uncertain.12

The pathogenesis of FPV infection is similar to that of CPV infection (see Chapter 14). Transmission is by the fecal-oral route, and indirect transmission through contaminated fomites represents the most important means of infection. Like CPV, FPV enters cells using transferrin receptors13 and replicates in cells that are in the S-phase of the mitotic cycle. Initially, the virus replicates in oropharyngeal lymphoid tissue, after which it disseminates in blood to all tissues. Infection of lymphoid tissues leads to lymphoid tissue necrosis. Infection of the marrow is associated with leukopenia, which is compounded by neutrophil sequestration in damaged gastrointestinal tissue. The virus replicates in the intestinal crypt epithelial cells, with shortening of villi, increased intestinal permeability, and malabsorption.

Subclinical infection is probably widespread, especially in young adult or adult, immune-competent cats. Disease severity depends on factors such as age, immune status, and concurrent infections with other bacterial or viral pathogens, which increase the turnover rate of intestinal epithelial cells and enhance viral replication and cellular destruction. Co-infections can occur with feline enteric coronavirus, Clostridium piliforme, Salmonella spp., FeLV, or astroviruses.14-17 Disease generally occurs after an incubation period of 2 to 10 days. The peracute form of disease involves death without apparent premonitory signs. Infection of kittens or adult cats results in clinical signs of fever, lethargy, vocalization, weakness, and inappetence, which may progress to profound dehydration, vomiting, sometimes watery to hemorrhagic diarrhea, and rapid loss of weight. Some cats develop only anorexia and lethargy, in the absence of vomiting, diarrhea, or leukopenia.3 Secondary bacterial infections appear to be essential for signs of disease to occur. Death usually results from complications relating to dehydration, electrolyte imbalances, hypoglycemia, hemorrhage, or bacteremia and endotoxemia.

In the developing fetus or neonate, FPV replicates in a variety of tissues. Abortion, congenital abnormalities, or infertility can result from infection early in pregnancy, although the queen is generally otherwise unaffected. Later in pregnancy or in neonates up to approximately 1 week of age, viral destruction of Purkinje cells and granule precursor cells located in the cerebellar external granular layer leads to cerebellar hypoplasia (Figure 19-1). The severity of infection can vary between kittens in a litter. Sometimes a portion of the litter fails to survive and the remainder develop neurologic signs.18 Signs of cerebellar ataxia are nonprogressive and are most apparent when kittens begin to walk at about 2 to 3 weeks of age, although mentation and appetite are otherwise normal, and these kittens can sometimes make acceptable pets. Other developmental central nervous system (CNS) abnormalities have been reported less commonly, and include hydrocephalus, porencephaly (cystic lesions within the cerebral hemispheres), or hydranencephaly (complete replacement of the cerebral hemispheres with cystic lesions). These abnormalities may be accompanied by signs of forebrain damage, such as seizures and behavioral changes. Unlike canine parvoviruses, FPV appears to be able to infect neurons other than the cerebellar Purkinje cells, which are terminally differentiated cells.19 Ocular lesions can also develop and include retinal folding, dysplasia and degeneration, and optic nerve hypoplasia. 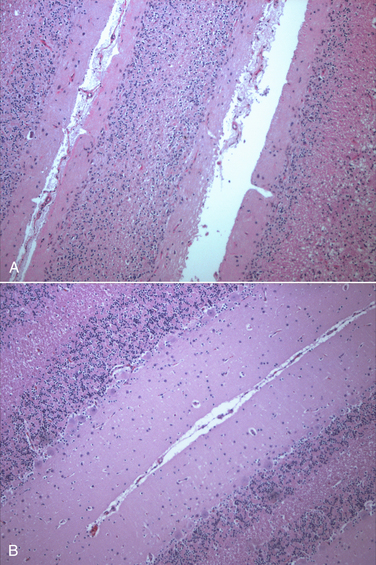 FIGURE 19-1 A, Severe cerebellar hypoplasia in a 1-year-old male neutered domestic shorthair that was euthanized for cerebellar signs and seizures. The neurologic signs had been present since the cat was found at approximately 4 months of age. There is a paucity of neurons and glial cells in all layers. B, Normal feline cerebellum. Note the dramatically increased width of the molecular layer when compared to (A).

The DNA of FPV has been detected in the myocardium of cats with hypertrophic, dilated, and restrictive cardiomyopathy, but was not detected in a subset of healthy control cats.20 Additional studies to assess the role of FPV in feline myocarditis and cardiomyopathy are needed.

Fecal shedding of virus usually lasts for several days, and in some cats, it may persist for up to 6 weeks. Kittens infected in utero have been reported to develop immune tolerance to the virus, with viral persistence in the kidneys and lungs for up to 1 year in the absence of shedding.

The most common physical examination findings are weakness, lethargy, and dehydration. Fever (103°F to 107°F or 39.5°C to 42.5°C) may be present early in the course of illness. Pain may be noted on palpation of the abdomen, or a hunched posture may be present. The perianal region may be contaminated with feces. Oral ulceration and mucosal pallor may be present in severely affected cats, and rarely, bacteremia may be accompanied by icterus. Terminally, affected cats may be hypothermic, bradycardic, and comatose.

Kittens with cerebellar signs are generally bright and alert but exhibit intention tremors, incoordination, ataxia, hypermetria, a broad-based stance, decreased postural reactions, a truncal sway, and absence of a menace response. Cats with forebrain disease may show abnormal behavior, such as aggression or decreased mentation. Examination of the ocular fundus may reveal folding of the retina, evidence of retinal degeneration with discrete gray spots, and optic nerve hypoplasia. Retinal lesions may be an incidental finding in older, recovered cats, which includes surviving cats with cerebellar hypoplasia.

The most common abnormality on the CBC in feline panleukopenia is leukopenia, which is due to a neutropenia and lymphopenia (Box 19-1).3 Total leukocyte counts may be as low as 50 cells/µL, and toxic band neutrophils may be present. In one study, only 65% of 187 cats with panleukopenia were leukopenic, so an absence of leukopenia does not rule out FPV infection. Recovery may be associated with lymphocytosis and leukocytosis. Thrombocytopenia and mild anemia are also common. Thrombocytopenia may result from damage to the marrow or, possibly, disseminated intravascular coagulation (DIC).

Serum biochemistry analysis may show hypoalbuminemia, hypoglobulinemia, and/or hypocholesterolemia; electrolyte abnormalities such as hyponatremia or hypernatremia, hypochloremia, hyperkalemia, or, less commonly hypokalemia; and acid-base abnormalities (see Box 19-1). In severely affected cats, azotemia, increased serum activities of AST or ALT, or hyperbilirubinemia may be present. Hyperglycemia or hypoglycemia may also be identified.

BOX 19-1   Prevalence of Laboratory Abnormalities in Cats with Panleukopenia

As in dogs with parvoviral enteritis, abdominal radiography in cats with panleukopenia may show evidence of poor serosal detail and a fluid- and gas-filled gastrointestinal tract.

MRI of cats with neurologic signs due to FPV may reveal evidence of cerebellar agenesis or hypoplasia. Rarely, hydrocephalus, porencephaly, or hydranencephaly can be detected.18

Diagnostic assays available for feline panleukopenia are listed in Table 19-1.

Use of serology for diagnosis of feline panleukopenia is complicated by widespread exposure or immunization, so serologic assays that detect antibody against FPV are generally used to assess the need for vaccination rather than for diagnosis. They can also be used in outbreak situations in order to determine which cats are at risk for development of disease and virus shedding, and which cats are protected and therefore at low risk. The gold standard method for FPV serology is hemagglutination inhibition, which measures the ability of serum to prevent agglutination of erythrocytes by the virus (see Chapter 2). Serum neutralization assays may also be used. Point-of-care assays designed to detect antibody titers to CPV have a low sensitivity (28%) for detection of antibodies to FPV in cats.21 A point-of-care assay designed to detect feline antibodies (ImmunoComb Feline VacciCheck Test Kit, Biogal, Galed Labs, Israel) also had a low sensitivity (49%), although specificity was high.21 The use of this test for risk analysis in shelter situations may lead to inappropriate removal or isolation of cats with false-negative results for protective antibody titers, which might waste time, space, and financial resources.21 However, positive results should reliably indicate protection. The test can be performed quickly (30 minutes) and requires as little as 5 µL of serum or plasma, so provided it is understood that a negative result means either a protected or susceptible status, and a positive result equates to protection, the test still has the potential to provide useful information.