Evaluation of recently obtained reptiles from the growing population of captive-bred or wild-caught harvested animals available as pets can be daunting for most practitioners. The types of species presented for examination and the dizzying range of requirements for their needs—from husbandry to diet—can easily overwhelm the time constraints of a typical veterinary office call. In addition, the laboratory tests and parameters of health can vary tremendously across the numbers of reptile species kept as pets.

This chapter will present an overview of the types of reptiles currently in the pet trade, the recognized husbandry deficiencies, the diseases that do not commonly result in a need for pathologic evaluation, and those disease processes that can result in death. The data for the postmortem and, rarely, biopsy evaluations come from a review of reptiles (n = 349) sold through a pet store chain over the time period from 2003 to 2010 and submitted to one author’s laboratory (DRR). The described husbandry and common conditions not associated with a need for pathologic sampling are collected from one exclusive exotic animal private practice (CG).

Understanding the types of conditions that could lead to disease and/or death can assist in determining which laboratory tests and/or husbandry/nutritional deficiencies to focus on within specific species.

Although many of the lizards and snakes were young animals (evidenced by size and the occasional yolk sac remnants observed on gross postmortem examination), the age of many of the chelonians was not determined (Figure 2-1). 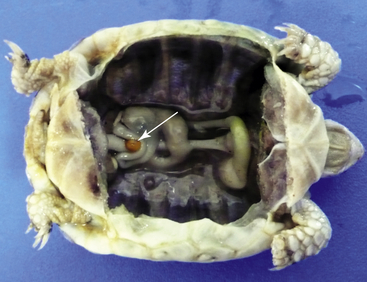 The gender of each animal submitted was determined in most complete postmortems; however, there were rarely noted disease conditions linked to the reproductive tract. This is not unexpected given the age of the animals for sale in the pet trade.

These necropsy percentages may not exactly reflect the types of species seen in a busy private practice because submission depends on not only the perceived value of the animal but also the value of the postmortem findings.

Deficiencies in husbandry are overwhelmingly the most common factor causing illnesses in captive reptiles. Overcrowding, exposure to sick animals (and their body fluids/excrements), poor nutrition, improper thermal gradients, and many other aspects of reptile care may constitute the basis of many of the illnesses that plague reptiles in the pet trade today (Figure 2-2). Many of the most popular reptiles are shipped to pet stores in containers that are either too small or have too many other of the same (or different) species and minimal, if any, thermal regulation. Many may be shipped from a breeder to a distribution center before being sent to a pet store, and many of these animals (usually younger animals) may not feel like eating for several days during this transition period. The basics of thermal support, humidity, feeding opportunities, hiding options, and a reasonable animal-to-space ratio may not always be provided, even within a pet store setting. All of these factors may trigger new conditions or flare-up of preexisting conditions. Examples may include adenoviral or coccidial infections in Bearded Dragons and cryptosporidial infections in Leopard Geckos.1 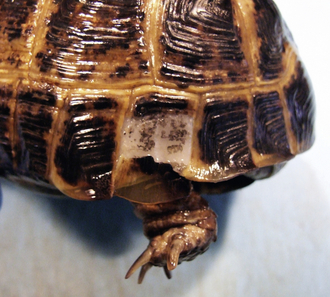 When possible, diagnostics should be performed. These should include (but not be limited to) a thorough physical examination, fecal parasite examinations (e.g., direct, float, and/or special stains), laboratory analysis (complete blood count/chemistry profile) and histology/cytology, when indicated (Figure 2-3). Advanced diagnostics including cultures (bacterial and fungal), imaging (e.g., radiographs, ultrasound, magnetic resonance imaging [MRI], and computed tomography [CT]), and molecular testing (including polymerase chain reaction [PCR] testing) may also be indicated. Once a diagnosis is obtained, specific treatments, when available, should be recommended and pursued. While test results are pending, supportive care (including environmental support, fluids, nutritional [caloric and vitamin] support, and antibiotics, among others) should be instituted, as needed. 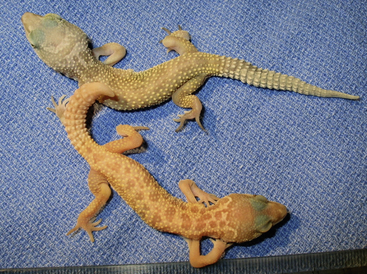 FIGURE 2-3 The physical examination will be determined by the type of animal and size. Evaluation of body condition, color, activity, swellings/masses, and integrity of the skin should be noted.

Many of the common presentations that are seen in practice are manageable, and many of these animals that are seen are not included in the necropsy numbers listed earlier in the chapter. The most common conditions that present are as follows: 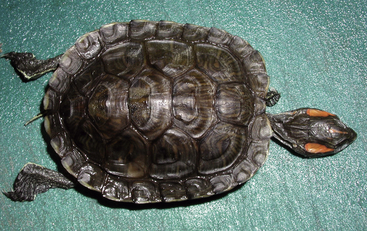 In lizards, parasites include coccidia, pin worms, and protozoans in Bearded Dragons, cryptosporidia are found in Leopard Geckos, and protozoans in most species. Gram-negative enteritis are common in many species. Nutritional secondary hyperparathyroidism (resulting in hypocalcemia and associated changes) is common in iguanas and has also been seen in Leopard Geckos (Figure 2-5). Ocular issues, including conjunctivitis from environmental factors (e.g., reptile bark) or retained sheds (possibly from humidity/hydration issues), are also common (Figure 2-6). Stomatitis is commonly seen in Water Dragons, Blue-tongued Skinks, Bearded Dragons, and Leopard Geckos. Adenovirus in Bearded Dragons may be more common than reported, and concurrent infections with adenovirus and parasites (e.g., coccidia and cryptosporidia) may lead to more severe signs and a greater chance of mortality.2 Failure to thrive, a catch-all term used in captive animals to describe illnesses that are not specifically identified but compromise the animal, is seen in more “sensitive” species (e.g., most chameleon species, some geckos, uromastyx species, and in some areas, water dragons) (Figure 2-7). 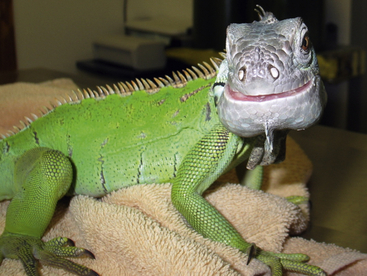 FIGURE 2-5 The bilateral swelling of the mandible in this common Green Iguana (Iguana iguana) is due to fibrous tissue attempting to stabilize the bones.