Cardiac responses to exercise and training

Role of the heart in determining athletic performance

Heart rate and cardiac output increase quickly at the commencement of exercise, enabling comparatively rapid increases in the rate of oxygen consumption. The 6- to 8-fold increase in heart rate during maximal exercise, coupled with an increase in stroke volume, results in maximal cardiac output during exercise of approximately 300 L/minute, or over 0.6 L/minute/kg in trained horses. This large increase in blood flow to exercising muscle is fundamental to the athletic performance of the horse during intense exercise. This is especially so in events of more than 1 minute duration, which rely mainly on aerobic energy supply.1 Training results in adaptations that increase the rate of blood flow to skeletal muscle during intense exercise. The main adaptation is an increase in stroke volume. Training also causes changes in the electrocardiogram and echocardiogram.

In this chapter the cardiac responses to exercise and modifications with training will be reviewed. Relationships between cardiac measurements and both fitness assessment and performance prediction will also be discussed.

A linear relationship between heart rate and submaximal work effort has been observed in horses trotting, galloping and swimming.3–8 This relationship is usually defined by use of treadmill or racetrack exercise tests which involve increasing the speed every 1–2 minutes and measuring the heart rate at the completion of exercise at each speed. After a suitable warm up, for example, 3 minutes trotting, the heart rate is stable after 1 minute of further exercise at higher speeds. Heart rates recorded during an exercise test in three groups of Thoroughbred horses are illustrated in Figure 3.1.8 The figure demonstrates the linear relationship between heart rate and speed of submaximal exercise. At higher speeds, further increases in treadmill speed are not accompanied by an increase in heart rate, and a plateau occurs. The horse is then exercising at its individual maximal heart rate. 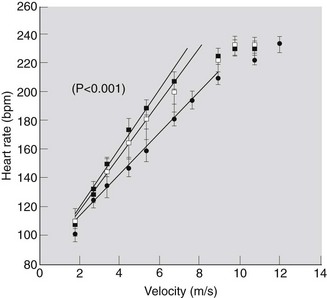 Figure 3.1 Mean heart rate ± SE, as a function of velocity for yearling (

The typical relationship between heart rate and speed of exercise enables variables such as V200 and VHRmax to be calculated. These measurements have been used to compare different groups of horses, or individual horses with a normal group, or measure changes in the heart rate response to exercise during training or detraining.9 V200 is the velocity which generates a heart rate of 200 beats per minute. VHRmax is the velocity at which the loss of linearity occurs and no further increase in heart rate occurs, despite an increase in velocity. Derivation of these variables is illustrated in Figure 3.2.9 Some studies have also used V140, the velocity that results in a heart rate of 140 beats per minute. It has been argued that V200 is superior because it approximates the intensity of exercise which results in a blood lactate concentration of 4 mmol/L.10 However, this argument should not dictate strict adherence to V200. If V200 is used to compare the fitness of different horses, the measurement could be very misleading. Two horses could have the same V200, but very different maximal heart rates, and therefore very different velocities at which they reach their maximal heart rates. The V200 ignores the cardiac reserve between 200 bpm and maximal HR, and so is best used to measure changes in an individual horse over time, assuming that maximal HR does not change. 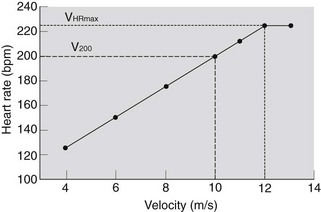 The heart rate versus work relationship during treadmill exercise is very reproducible for individual horses at heart rates between 120 and 210 bpm.5,11 During racetrack exercise, the reproducibility of V200 in Standardbred horses measured in a racetrack exercise test was also good.12 This study also found that V200 was not significantly altered by a change of racetrack on which the test was conducted. However, in an individual horse extraneous factors can influence the heart rates during an exercise test. For example, anxiety, the presence of a breathing mask10 and changes in treadmill exercise testing routine13 can elevate heart rate during exercise.

The normal heart rate responses to treadmill exercise in Thoroughbred horses have been described.8,14 Figure 3.1 illustrates the responses in 16 yearling, 12 two-year-old and 14 trained adult Thoroughbreds.8 The slope of the linear regression of heart rate on m/s in the trained adult horses was significantly less than the slopes for both the untrained two-year-olds and yearlings. 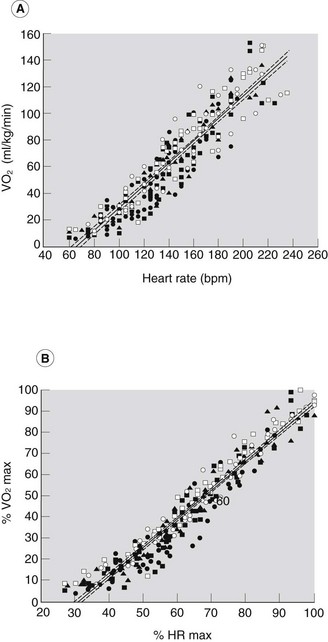 (B) in five Thoroughbred racehorses during submaximal treadmill exercise. Results are pooled from exercise tests conducted at 0, 2.5, 5, 7.5 and 10% treadmill inclines.15 •, 0%;

The overshoot at the commencement of exercise may be absent if the exercise is at a high intensity. Instead, heart rates may gradually increase to maximal. Overshoot of heart rate occurred at the start of exercise at 50% of

(maximum oxygen uptake) in Standardbred horses. However, at 100% 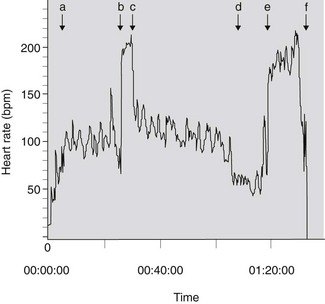 During prolonged strenuous submaximal exercise at a constant work rate, a gradual increase in heart rate, or “cardiovascular drift” can occur. For example, during 30 minutes of exercise, mean heart rate increased from 154 to 173 bpm.20 This “drift” was accompanied by increases in minute ventilation and stroke volume, while cardiac output was unchanged. In another study, horses exercising at 55–60% of individual HRmax for 60 minutes had minimal changes in heart rate.21 Heart rate responses during prolonged exercise probably depend on hydration status and the environmental conditions.

The effects of dehydration on heart rate during and after 40 minutes of exercise eliciting approximately 40% of maximal oxygen consumption have been described.22 Horses were exercised in three conditions; euhydrated, 4 hours after administration of furosemide (1.0 mg/kg i.v.) to induce isotonic dehydration, and after 30 hours without water to induce hypertonic dehydration. The most pronounced heart rate drift occurred in the dehydrated horses. Heart rates after 30 minutes of exercise were significantly higher in the horses dehydrated by treatment with furosemide than in the control, euhydrated condition. During the recovery period heart rates were also higher in both groups of dehydrated horses than in the control horses (Fig. 3.5). This study demonstrated that dehydration results in higher heart rates during and after prolonged submaximal exercise. 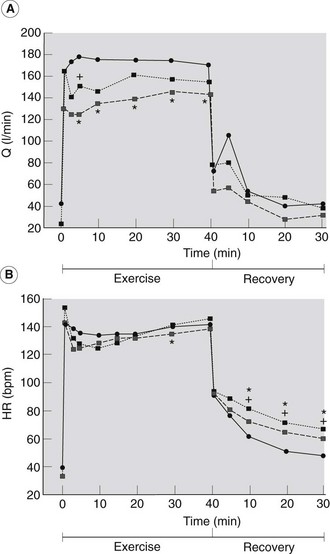 Figure 3.5 Cardiac output Q (A) and heart rate HR (B) of six horses during exercise at 40% of maximal oxygen uptake for 40 minutes and for 30 minutes after exercise in control conditions (C •___•), dehydrated by furosemide (FDH

) and by water deprivation (DDH

Diseases such as chronic obstructive pulmonary disease result in heart rates during submaximal exercise that are significantly higher than those found in normal horses.23–25 Measurements of heart rate and other cardiorespiratory and metabolic indices during treadmill exercise have also been used to investigate the functional significance of various electrocardiographic findings. This technique was used to illustrate that T wave changes and second degree AV block in the resting electrocardiogram do not result in significantly different heart rates or peak oxygen consumption in Thoroughbred and Standardbred racehorses.26

High heart rates during submaximal exercise are also to be expected in horses with diseases which limit stroke volume, such as atrial fibrillation.27 (

AF) When valvular dysfunction, or structural cardiac disease results in cardiac decompensation, affected horses will also have an increased heart rate during exercise, before clinical signs of heart failure are evident at rest.28

However, lameness should also be considered as a cause of high heart rates during submaximal exercise tests. Mild unilateral forelimb lameness also causes lower maximal oxygen uptake and more rapid blood lactate accumulation during intense exercise.29 High heart rates could also be due to anxiety if the horse has not been adequately acclimated to the treadmill test procedures. Field studies of submaximal heart rate could be easier to interpret because the horse is exercising in its usual environment, and should be less subject to the effects of fear or anxiety.

The highest heart rates recorded during racing in 19 Thoroughbreds averaged 223 bpm, with a range of 204–241 beats/minute.30 Mean peak heart rate in eight yearling Thoroughbreds was approximately 240 beats/minute, compared to 220–230 in 2- to 4-year old horses.14 Likewise, yearling, two-year-old and adult Thoroughbreds had similar means (229–231 bpm) and ranges (215–254 beats/minute) of peak heart rates during an incremental treadmill exercise test.8 In a recent retrospective multicentre study, horse age, gender, breed, use and fitness combined with the testing centre itself were shown to affect peak heart rate in 394 horses undergoing standardized treadmill exercise tests.31 High interindividual variability in heart rates while racing have also been recorded in Standardbreds, ranging from 210 to 238 with a mean of 221 beats/minute.32 However, in an individual horse, the maximal heart rate is highly repeatable.11 Further work is required to confirm that the highest (peak) HRs recorded during Thoroughbred and Standardbred races are equal to the maximal HR attainable by the horse.

A new technique has been established for the study of submaximal and maximal heart rates during field gallops in Thoroughbred racehorses. This approach uses simultaneous measurement of velocity with a global positioning system, and heart rates. Derived indices of fitness such as V200 and VHRmax during the field gallop on a racetrack have been measured reliably, and have demonstrated increases with training in 2-year-old Thoroughbreds33 VHRmax has also been correlated with retrospective racing performance in Thoroughbreds.34

After prolonged submaximal exercise, recovery heart rates are higher in horses that were dehydrated before exercise.22 Poorly performing endurance horses have higher postexercise heart rates than the better performers.39 Horses with heart rates less than 60 beats/minute at 30 minutes post-exercise had less evidence of dehydration and myopathy.40 Horses with heart rates greater than 65–70 beats/minute at the 30 minute recovery time at the mid-point of an endurance ride were more prone to develop severe dehydration and exhaustion when allowed to continue.41

The individual HRmax is not affected by training, and it is not a useful measure of fitness.8,47,49 Individual HRmax can be affected by the cardiac rhythm abnormality, atrial fibrillation.28 During atrial fibrillation peak heart rates during exercise are greatly increased compared to during normal sinus rhythm. In clinical cases affected by paroxysmal or sustained atrial fibrillation, heart rates during submaximal exercise can approach 300 beats/minute. As a result of the abnormally high heart rates maximal stroke volume is decreased due to suboptimal ventricular filling, and peak athletic performance is adversely affected. Resolution of the abnormal rhythm after treatment or spontaneous conversion usually results in return to normal individual HRmax and previous levels of athleticism.

Heart rate measurements during submaximal treadmill exercise have been expressed relative to treadmill speed in some studies for measurement of fitness. For example, the treadmill velocities which result in heart rates of 140 (V140) or 200 beats/minute (V200) have been used. In an individual horse a decrease in V140 or V200 indicates that the heart rate is abnormally elevated during submaximal exercise. This decrease could suggest loss of cardiovascular fitness, cardiac or pulmonary disease, or lameness.

, despite the limited time available for ventricular filling at high heart rates during exercise.54 Stroke volumes of 2.4 mL/kg (1250 mL)54 and 3.8 ± 0.4 mL/kg (approximately 1700 mL)55 have been reported in fit Thoroughbreds during treadmill exercise at

. This large difference could reflect biological variation, or differences in the method of measuring oxygen uptake during the exercise test.

During tethered swimming at low work loads, stroke volume decreased from 2.06 mL/kg at rest to about 1.5 mL/kg. This response may be related to decreased venous return secondary to the alterations to breathing pattern during swimming.6

During prolonged exercise cardiac output is decreased in dehydrated horses, and this limits thermoregulation.22 In an experiment in which horses were exercised for 40 minutes while euhydrated, or dehydrated by either withdrawal of water (DDH) or administration of furosemide (FDH), cardiac output was significantly lower in FDH (144.1 ± 8.0 L/minute) and in DDH (156.6 ± 6.9 L/minute) than in euhydrated horses (173.1 ± 6.2 L/minute) after 30 minutes of exercise (see Fig. 3.5). Dehydration resulted in higher temperatures in the middle gluteal muscle and pulmonary artery during exercise, but temperatures in the superficial thoracic vein and at subcutaneous sites on the neck and back were not significantly different. Sweating rates were also similar in control and dehydrated horses, and it was concluded that the impairment of thermoregulation was primarily due to decreased transfer of heat from core to periphery.

Tags: Cardiology of the Horse
Jul 31, 2016 | Posted by admin in INTERNAL MEDICINE | Comments Off on Cardiac responses to exercise and training
Premium Wordpress Themes by UFO Themes
WordPress theme by UFO themes