Normal and abnormal development of the heart

Adaptation from fetal to neonatal circulation

Clinical assessment of the cardiovascular system in foals

NORMAL AND ABNORMAL DEVELOPMENT OF THE HEART

The primoirda of the heart begin as clusters of paired symmetrical mesenchymal cells that fuse into a straight tube in which the segments are arranged as follows: atria, primitive ventricle, bulbus cordis, conus and truncus. The tube becomes hollow and through differential growth characteristics the different segments expand. Very early in development, the heart adopts “sidedness” and proceeds to a pattern of asymmetrical growth. Abnormalities at this stage lead to conditions such as situs inversus where the entire body is reversed from left to right, a condition that has been reported in the horse.7,8 Next, a process of cardiac looping occurs and the bulbus cordis migrates relative to the ventricle to take up the positions that will eventually form the right (RV) and left (LV) ventricles. Developmental abnormalities at this stage can lead to a variety of malformations in which the ventricles fail to adopt their normal side-by-side pattern.9

The early looped cardiac tube has a single inlet, the common atrioventricular (AV) canal and a single outlet, the bulboventricular defect (i.e. the opening between the ventricle and the bulbus cordis) and on into the truncoconal tube. Septation of the right (RA) and left atria (LA) involves ingrowths from several areas. The septum primum grows to meet outgrowths of the AV cushions and later the septum secondum arises near the common sinus venosus. The foramen ovale is left as a communication between the two atria throughout fetal life. Developmental abnormalities at this stage can lead to atrial septal defects (ASD) which are classifed as: (1) ostium primum ASD that is due to lack of fusion of the two medial AV cushions; (2) fossa ovalis defect that results from the resorption of the septum primum and must be distinguished from persistence of the patent foramen ovale that is a normal variant; and (3) sinus venosus ASD that is due to lack of formation or resorption of the septum secundum.9

Simultaneously, the AV canals remodel to align the left and right AV canals with their respective ventricles and ventricular septation ensues.10 Septation of the ventricles is completed in the horse embryo by the 36th to 38th day.11 This occurs through the convergence and fusion of five different components: the primitive ventricular septum, the cranial and caudal AV cushions and the dextro-dorsal and sinistro-ventral conal ridges. During this process the AV valves are formed. Failure at this stage can lead to common ventricle that is due to absence of both the primitive ventricular septum and AV cushions or, more commonly, a range of ventricular septal defects (VSD) are possible and relate to failure of individual components. Membranous or perimembranous VSD are due to inadequacy of any of the five components. This VSD is located in the LV outflow tract just between the aortic valve and is the commonest form of VSD in the horse4,12,13 and the most common form of simple congenital cardiac defect. Supracristal or conal VSD is located in the RV outflow tract, just below the right coronary cusp of the aortic valve. This form occurs occasionally in horses. AV canal defects are the most complex and a range of abnormalities is possible. This VSD is caused by failure of the uppermost part of the septum to develop due to lack of the medial AV cushion and can also affect formation of the AV valves. The muscular VSD, which is the second commonest form in the horse,14,15 is due to one or more defect in the primitive ventricular septum. These defects can occur in any part of the muscular septum. (

The formation of the aortic and pulmonary trunks is achieved by truncoconal septation: ridges form within either side of the truncus and grow inwards as the truncus spirals to create the aortic and pulmonary trunks. Cushions at the base of the truncus form the aortic and pulmonary valves. Septation and spiralling of the conus leads to the formation of the muscular, cranially located RV outflow tract and the shorter, fibrous LV outflow tract.11,14 Abnormal truncoconal septation and spiralling can lead to a wide range of malformations9 of which the most commonly reported in the horse is Tetralogy of Fallot.16–22 Thus, it appears that conotruncal developmental abnormalities account for the majority of complex congenital cardiac defects in horses.

ADAPTATION FROM FETAL TO NEONATAL CIRCULATION

The fetal circulation is adapted to direct oxygenated blood entering the RA via the caudal vena cava towards the left side from where it can supply the body and to divert some of the RV output away from the noninflated lung. In the neonatal period, these processes must be reversed to adapt to extrauterine life. In the fetus, the foramen ovale is a tube-like flap of tissue, with fenestrations at its distal end, which extends from the RA near the aperture in the caudal vena cava to the lumen of the LA. Oxygenated blood from the placenta, returning to the RA from the caudal vena cava, passes though the foramen ovale to the LA, and then leaves the left heart via the aorta to preferentially supply the brain. Flow can be visualized through the foramen ovale in some foals for several weeks after birth (Fig. 15.1) and obliteration of the foramen ovale takes place during the first few weeks of life.23 The fetal uninflated lung has high vascular resistance and a proportion of blood leaving the pulmonary artery (PA) bypasses the lung, by flowing through the ductus arteriosus into the aorta. When the lungs inflate after birth, the resistance in the pulmonary circulation falls and the ductus begins to close in response to increasing arterial oxygen tension. Flow within the ductus arteriosus creates a machinery murmur high and cranially over the left heart base that usually disappears within the first few days of life and with Doppler echocardiography, ductal flow can be visualized in some foals of the same age (Fig 15.2). Ductal closure is initially physiological, due to constriction of the vessels, and subsequently becomes anatomical as closure with muscular elements occurs.23,24 Perinatal hypoxia can delay or even reverse ductal closure, leading to persistent fetal circulation. 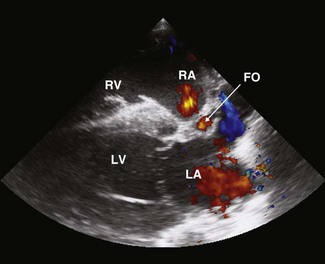 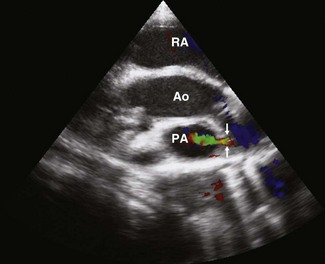 Figure 15.2 A right parasternal oblique long-axis colour Doppler echocardiogram of the aorta (Ao) and pulmonary artery (PA) from a healthy 3-day-old pony foal. Blood is flowing through the ductus arteriosus (arrows) from the descending Ao to the PA. RA, right atrium.

CLINICAL ASSESSMENT OF THE CARDIOVASCULAR SYSTEM IN FOALS

Cardiac disease should be suspected in foals with loud, widely radiating murmurs, particularly if they are associated with a precordial thrill. Foals may be stunted or fail to gain weight and have other, more specific signs of cardiovascular disease, such as dependent oedema, jugular distension and pulsation, pleural effusion, ascites, weakness and collapse.

Conventional means of clinical assessment of the cardiovascular system in foals include blood pressure measurement, electrocardiography,28 radiography29 and echocardiography28,30–32 (see Chapter 9). In addition to lateral thoracic radiographs, in the smaller foals it may be possible to perform both dorsoventral thoracic radiographs, greatly adding to their diagnostic value. Radiography is less sensitive than echocardiography in estimating heart size, but large changes in cardiac dimensions may be apparent and, with left-to-right shunting, overcirculation of the pulmonary vasculature may be present (Fig. 15.3). Their smaller body size also makes angiography a feasible technique in foals and this is particularly useful in the demonstration of intra- and extracardiac shunts.33–36 Cardiac catheterization allows pressure and oxygen tensions to be measured within various chambers to document intracardiac shunting.37 However, as these are invasive procedures, both cardiac catheterization and angiography are now used less extensively than echocardiography, which has the great benefit of being noninvasive.28,30–32 Nuclear angiography is an alternative noninvasive means of demonstrating left-to-right shunts.38,39 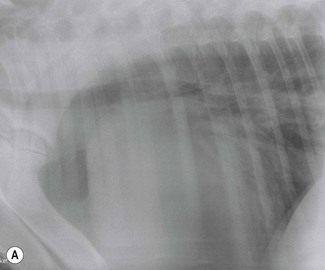 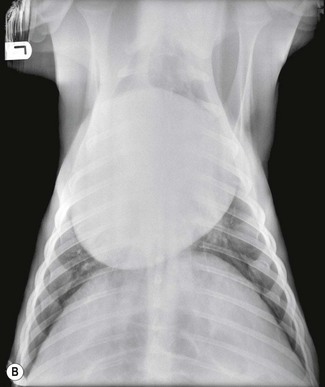 Figure 15.3 Lateral (A) and dorsoventral (B) radiographs of the thorax from a 6-week-old Thoroughbred with a large VSD. (A) There is marked cardiomegaly with tracheal elevation and overcirculation of the pulmonary vessels produces a pronounced vascular pattern. (B) The dorsoventral projection confirms biventricular enlargement.

The echocardiographic examination should begin with a systematic evaluation of each cardiac structure individually to determine its position in relation to other structures,31,32 and a more detailed description of the echocardiographic approach to congenital cardiac defects is given in Chapter 9. Spectral and colour Doppler echocardiography can be used to identify intra- or extracardiac shunts while contrast echocardiography is particularly applicable in congenital cardiac disease.40,41 This involves the administration of a microbubble-laden solution via the jugular vein, rendering the blood echogenic and allowing the path of blood flow to be demonstrated. A suitable solution can be made by mixing equal volumes of the patient’s blood and saline with a small volume of air. More contrast is achieved by holding off the jugular veins during administration and then releasing all the contrast, once injection is complete. With right-to-left shunting, bubbles can be seen entering the left side of the circulation. With left-to-right shunting, or lesions such as intact aortic aneurysms, a negative contrast effect is observed as anechoic blood is visible within an echogenic chamber. (

The VSD is the commonest congenital cardiac defect in horses4,12–15,37,42–44. In the author’s clinical population; simple VSDs are diagnosed approximately six times more often than any other congenital cardiac defect. VSDs are also frequently a component of complex defects.6,35,42,43,45–49 VSDs have been documented in a wide variety of breeds. The lesion is particularly common in Welsh Mountain ponies. Welsh Section A ponies are many times more likely to have a VSD than Thoroughbreds (relative risk: 27.4, 6.16–122.01, P < 0.0000). Four per cent of 200 Welsh Mountain ponies had cardiac murmurs consistent with VSD in an auscultatory survey (H. Whishart and C. M. Marr, unpublished data).

VSDs are usually located in the membranous (nonmuscular) portion of the septum in the left ventricular outflow tract (subaortic) immediately below the right coronary cusp of the aortic valve and the tricuspid valve4,12,13 (Figs. 15.4–15.6). In this location, defects are usually single but can be fenestrated (Fig. 15.7). Less commonly, defects are found in the right ventricular outflow tract (subpulmonic) and the perimembranous or muscular portions of the septum where they may be single, multiple or fenestrated.14,15 Defects may also be present in more than one location. In the left ventricular outflow tract, larger defects can lead to moderate to severe aortic insufficiency as the cusps of the aortic valve are sucked into the defect (see Fig. 15.6) and, ultimately, may rupture.4,50 The shunt direction is usually left to right with simple VSDs; however, with additional lesions, such as bicuspid pulmonary valve, bidirectional shunting may exist.42 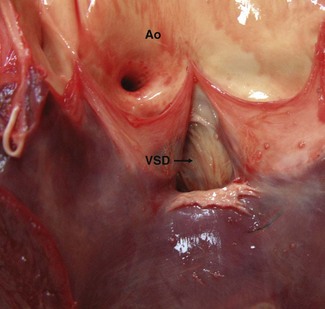 Figure 15.4 A post-mortem specimen from an 8-month-old Thoroughbred colt with a large membranous ventricular septal defect (VSD) below the aortic valve. Ao, aorta. 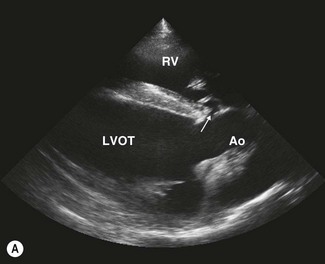 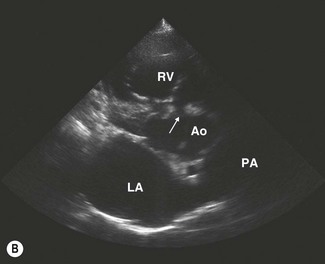 Figure 15.5 Right parasternal long-axis (A) and short-axis (B) echocardiograms of the left ventricular outflow tract (LVOT) from a 6-year-old Welsh mountain pony with no signs of exercise intolerance in which a membranous VSD (arrows) was detected during a routine physical examination. The defect is 1.37 cm in long axis and 1.17 cm in short axis. The diameter of the aorta (Ao) is 4.6 cm, giving a VSD:Ao ratio of 0.29. RV, right ventricle; PA, pulmonary artery; LVOT, left ventricular outflow tract; LA, left atrium. 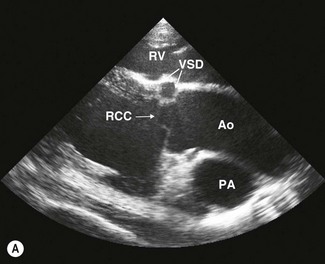 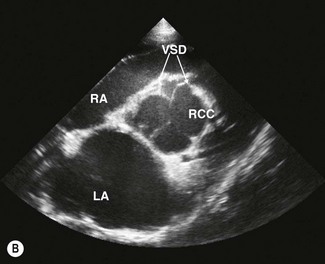 Figure 15.6 Right parasternal long-axis (A) and short-axis (B) echocardiograms of the left ventricular outflow tract from a yearling Welsh mountain pony with stunting and exercise intolerance and a membranous VSD (between arrows). The right coronary cusp (RCC) of the aortic valve is prolapsing into the defect, leading to aortic insufficiency. The VSD measures 1.26 by 1.72 cm and the aorta (Ao) measures 3.87 cm, giving a VSD:Ao ratio of 0.44. RV, right ventricle; RA, right atrium; LA, left atrium; PA, pulmonary artery.