Abstract
The development of complex disease models requires the parallel development or optimization of valid behavioral paradigms assessing complex brain-behavior relations. Besides validity of the applied paradigm, standardization at the level of experimental animals, testing procedures, and surroundings is essential to generate reliable data. High levels of validity and standardization can be reached only by skilled and experienced researchers. This chapter summarizes the most frequently used cognitive and behavioral paradigms in the phenotyping of rodent models of dementia.
Key words
Cognitionmotor functionaggressionanxietyactivityphenotyping

The development of complex disease models as described in subsequent chapters requires the parallel development or optimization of valid behavioral paradigms assessing complex brain-behavior relations. Analysis of cognitive and behavioral alterations should be substantiated through implementation of thoroughly validated behav­ioral paradigms that must be correctly applied for the data to be interpretable. Face validity on itself is not a sufficient validation criterion. The predictive validity of behavioral designs can be confirmed by showing that drugs acknowledged to work in the human setting either increase or inhibit the behavior in question. Construct validity of a behavioral paradigm or protocol implies solid insight into dependable variables and their effect on outcome parameters. Besides validity of the applied paradigm, standardization at the level of experimental animals, testing procedures, and surroundings is essential to generate reliable data. High levels of validity and standardization can be reached only by skilled and experienced researchers who know for example how to handle animals to reduce potentially biasing stress.
Along with the development of genetically engineered animal models with presumed CNS deficits came the use of test batteries scrutinizing a wide variety of neurological and behavioral responses. These test batteries allow investigating potential correlative phenotypical changes. Moreover, a CNS phenotype can be confirmed in different paradigms, thereby strengthening the reliability of the model, as well as contributing to Russell and Burch’s 3 Rs with reduction of the number of experimental animals needed. One should, however, be aware of potential training effects dependent on the order of the different behavioral paradigms and potentially important behavioral differences between naïve and trained animals.
Writing a complete “how-to manual” for the behavioral phenotyping of a new dementia model would go beyond the scope of this chapter. This chapter will summarize the most frequently used behavioral paradigms and protocols to assess different aspects of altered behavior in models of dementia. For further reading, we refer the readers to excellent manuals on behavioral neuroscience as, e.g., “What’s wrong with my mouse?” written by Jacqueline N. Crawley (1) and “Methods of Behavior Analysis in Neuroscience” edited by Jerry Buccafusco (2). Since the majority of models use rodents, and especially (transgenic) mice, as model organisms, this chapter focuses on behavioral studies in rodents. It serves to mention though that many behavioral paradigms originally developed in rodents have been successfully adapted to the level of nonmammalian species like fruit flies (3–5), zebrafish (6–8), or C. elegans (9–11).

When a new model is developed, behavioral phenotyping often starts with the application of systematized observational test batteries to mainly assess general health and reflexes. Irwin developed a screening test (12) that is still in use today in modified forms. The Irwin test is a systematic observational method to comprehensively assess and quantify the behavioral and physiological state of the mouse and its response to drugs. Different parameters corresponding to the behavioral, neurological, and autonomic state of the mice are scored, to the extent possible, through direct observation only. Observers should be extensively trained, requiring at least 2 weeks to learn and an additional 2 weeks to develop assurance and ease in observation and animal handling. Interobserver variability should be restricted to a minimum, achieved by a period of simultaneous scoring and comparison. Moser and colleagues proposed a similar screening method termed the Functional observation battery (13), which rapidly assesses the autonomic, sensory, and motor integrity of rodents. It is based on the Irwin test, but focuses less on the neurological responses and is partly performed in the home cage. A third example of a screening test is the SHIRPA primary screen, which is also an adapted Irwin test. The SHIRPA prim­ary screen was specifically developed as a high-throughput phenotyping tool for studying mouse mutants (14). This test has been widely validated; standard operation procedures as well as databases containing the normal scores of several inbred and mutant strains are available (e.g., www.eumorphia.org).
In addition, researchers should also bear in mind to regularly include basic observations like body weight and temperature, and pay attention to body posture and gait. A healthy mouse is well groomed and displays pink coloration of ear pinna and footpads. Attention should be paid to aberrant spontaneous or stereotyped behaviors, like popping (repeatedly jumping in corner of cage), head bobbing, or circling.

It goes without saying that the behavioral phenotyping of a mouse model of dementia should focus on different aspects of learning and memory. A variety of paradigms and protocols have been developed to assess cognitive functions in rodents. Ideally, several paradigms requiring distinct sensory and motor abilities are chosen. Protocols distinguishing explicit versus implicit memory can be chosen, as well as designs assessing short-term versus long-term memory.
The Morris water maze (MWM) (15) is presently the most widely used paradigm for the evaluation of hippocampus-dependent visual-spatial learning and memory skills in rodents, which represents the highest cognitive level appreciable in rodents. In this test, the animals have to learn the location of a hidden platform using visual cues (Fig. 1). The task is based on the principle that rodents are reinforced by the water environment to escape from the maze via the quickest and most direct route. Spatial learning is verified in a subsequent probe trial with the platform removed; preference for the prior platform location is viewed as a measure of spatial learning. The task has built-in control parameters for potential noncognitive perturbations affecting performance; lower swim speed or the inability to reach the platform when it is marked with a clear visual cue (visible platform MWM task) may reflect sensory or motor dysfunction. Unfortunately, the MWM is among the most stressful of cognitive paradigms in rodents.

Morris water maze.
(a and b) In the Morris water maze test, the animals have to learn the location of a hidden platform using visual cues surrounding the maze; (c) With training, the animal learns the position of the platform, which is ultimately reached via the quickest and most direct route.
Besides the MWM, several other mazes have been developed, which are all based on the same principle; successfully passing through the maze is rewarded by escaping from the water in wet mazes, or by food as a positive reinforcer in dry-land mazes. Examples include the plus-shaped water maze, radial arm mazes, multiple Y mazes, and the Barnes maze (1).
Because of the high stress levels associated with the MWM, and the potential bias by motor impairment, behavioral neuroscientists have developed complex nonspatial hippocampus-dependent tasks like the odor paired-associates task, analogous to the verbal paired-association task for humans. The test was originally developed for rats (16), but was adapted for mice (17,18). The test consists of several phases in which associations between different odors have to be learned in order to obtain a reward (Fig. 2). Afterwards, flexible expression of the earlier attained memories is evaluated in transitivity and symmetry tests. Provided the animals can dig, motor impairment will not influence the results, neither will impaired vision. Moreover, the results are not biased by anxiety, since the test is based on natural scavenging habits, in contrast to the MWM paradigm. On the down side, the long duration of the protocol, which encloses several months, makes it unsuitable for the assessment for memory in progressing phenotypes. The same disadvantage may arise when using schedule-induced operant tasks employing operant conditioning boxes, as originally developed by B. Skinner (19), equipped with levers, nose poke operandi, lights, buzzers, pellet dispensers, and optical lick-o-meters. Protocols often include subsequent training schedules with increasing difficulty; from fixed ratio (e.g., a fixed number of responses delivers a pellet) and fixed interval schedules (e.g., FI30 where a food pellet is delivered every 30 s on response at that specific time point), over variable ratio and variable interval schedules, to complex conditioned emotional response tasks. 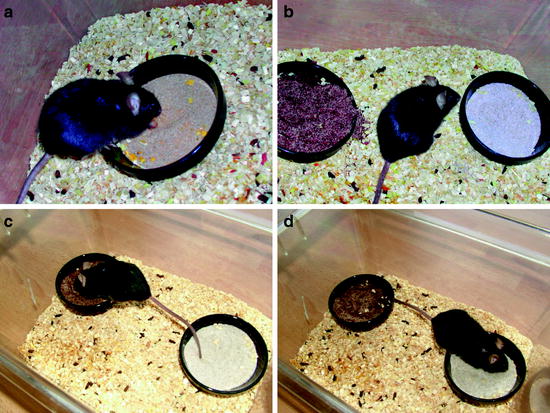 Odor paired-associates task.
In the odor paired-associate task, the animal has to dig up a reward from a cup filled with sand that has been scented by specific odors (e.g., coffee, curcumin, onion, nutmeg, cacao). (a) During the preliminary training phase, one cup with a reward (e.g., sweet cereal) is presented and the mouse has to learn to dig up the reward; (b) In later stages, two cups with different odors are presented. In only one cup, a reward is hidden; (c and d) The animal is allowed to dig in both cups to find the reward, while latency and the number of errors are counted.
Passive avoidance learning – a nonspatial form of learning – can be tested in a step-through box consisting of a small, brightly lit compartment and a large, dark compartment connected with a sliding door (Fig. 3). On acquisition day, the animal is placed in the first compartment of the box, and upon complete entry into a second, dark compartment, a light electric foot shock is applied through the grid floor. Exactly 24 h later, latency to re-enter the dark compartment is measured. Active avoidance (where the animal has to escape from a negative stressor in an active manner) can be tested in a two-compartment shuttle box where the animal has to jump to the other compartment to avoid an electrical shock that is predicted by a sound or light signal. Avoidance tasks are widely used to assess cognitive function in a short timeframe. However, procedural components of the task are not easily distinguishable from declarative memory components as is the case in the MWM or in cued and contextual learning. Latency to enter the dark compartment on day 1, which is based on the fact that nocturnal animals, like rats and mice, prefer dark, enclosed spaces over open, brightly lit spaces, is the single built-in control parameter. Sensory or motor dysfunction has to be ruled out by using other behavioral tasks (1,2). Avoidance tasks are comparable to cued and contextual conditioning, which is a fear condition task that measures the ability of an animal to learn and remember the association between an aversive stimulus and environmental cues (20). Associative learning is an adaptive process that allows an organism to learn to anticipate events. Cued and contextual conditioning requires a different set of sensory and motor functions, so that the procedural components do not overlap. Fear conditioning, scored as freezing responses, is among the most intuitive rodent learning and memory paradigms, and is less labor- and time-consuming than the MWM. 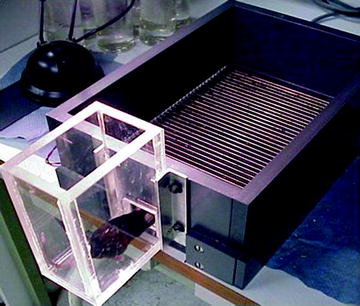 4 Behavioral and Psychological Signs and Symptoms of Dementia (BPSD)

In accordance with the increased clinical focus on BPSD, major efforts have been made to mimic specific behavioral alterations in animal models and to develop useful tools to evaluate new psychopharmacological strategies to replace atypical antipsychotics or classic neuroleptics, which display only modest effect size and are frequently associated with significant side-effects (25).
< div class='tao-gold-member'>
Only gold members can continue reading. Log In or Register to continue