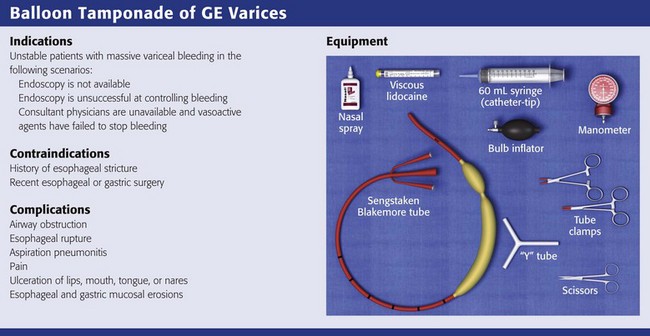 Managing patients with acute gastrointestinal bleeding from gastroesophageal varices can be one of the most challenging scenarios in emergency medicine. These patients often have advanced liver disease and can arrive at the emergency department (ED) with massive hematemesis, airway compromise, hemodynamic instability, critical anemia, thrombocytopenia, and coagulopathy. Gastroesophageal varices are the fourth most common cause of upper gastrointestinal bleeding (UGIB) and account for almost 12% of cases (Fig. 41-1).1 In patients with cirrhosis, varices account for up to 80% of cases of UGIB.2,3 In patients with established gastric or esophageal varices, the annual incidence of acute hemorrhage ranges from 4% to 15%.2,4

Figure 41-2 The Sengstaken-Blakemore (SB) tube. Note that this tube does not have esophageal aspiration ports; a nasogastric tube must be attached to the SB tube to allow esophageal suctioning (see text for details.)

Currently, three balloon tamponade devices are commercially available: the Linton-Nachlas, the Sengstaken-Blakemore, and the Minnesota tubes. In contrast to the Sengstaken-Blakemore and Minnesota tubes, the Linton-Nachlas tube is a single-balloon device that consists of a gastric balloon and two ports (esophageal and gastric) for aspiration and lavage. Because placement of these tubes remains a relatively rare procedure, most hospitals stock only one type of device. Regardless of the type of device, success rates for the control of hemorrhage with balloon tamponade tubes range from 60% to 90%.11

The general management of unstable patients with acute variceal bleeding is described in detail elsewhere. In brief, initial resuscitation should focus on early endotracheal intubation; circulatory resuscitation, including blood transfusion and administration of vasoactive agents and antibiotics; and early endoscopy. Vasoactive agents should be given as soon as possible in cases of confirmed or suspected variceal hemorrhage. Vasoactive medications reduce portal pressure and have been shown to decrease or stop variceal bleeding.12–17 Somatostatin and its synthetic analogue octreotide decrease release of the vasodilator hormone glucagon, thereby indirectly resulting in splanchnic vasoconstriction and reduced portal blood flow. Vasopressin and its synthetic analogue terlipressin are direct vasoconstrictors and can be given systemically or locally during angiography. These two medications, however, can cause significant coronary, cerebral, and splanchnic ischemia and are typically used in patients who fail somatostatin or octreotide therapy.

Endoscopy by a gastroenterologist remains the “gold standard” for the diagnosis and treatment of acute variceal hemorrhage.2 Sclerotherapy and band ligation are the two endoscopic techniques used to control bleeding esophageal or gastric varices. Endoscopic band ligation has been shown to be superior to sclerotherapy in initially controlling hemorrhage and improving survival.18 In fact, endoscopic band ligation is considered the treatment of choice for esophageal varices.2,18,19

It is important to recognize that balloon tamponade is only a temporizing measure. Even though success rates in controlling the initial hemorrhage are high, up to 50% of patients rebleed when the device is deflated.20 Although rebleeding rates can be reduced with the concomitant use of vasoactive agents, arrangements must be made for more definitive control of varices in patients with a balloon tamponade device in place.

Because gastroesophageal balloon tamponade devices are typically placed as a final attempt to control hemorrhage and prevent imminent death, contraindications to the device are few. They are limited primarily to conditions that predispose patients to esophageal rupture with balloon inflation and include a history of esophageal stricture and recent esophageal or gastric surgery.

Patients with an acute variceal hemorrhage that requires a balloon tamponade device are critically ill. Because these patients are at high risk for vomiting, aspiration, and airway compromise, endotracheal intubation should be strongly considered in all patients before placement of a balloon tamponade tube.21 For the rare patient who is not intubated, use of soft restraints and administration of appropriate analgesia and sedation are critical for a successful procedure.

For placement of a balloon tamponade tube, begin by testing the esophageal and gastric balloons for air leaks (Fig. 41-3, step 1). If there is any concern about a leak, submerge the balloons in water during inflation. If time permits, inflate the gastric balloon in 100-mL increments to the maximal recommended volume while measuring the pressure. Importantly, do not exceed a pressure of 15 mm Hg within the gastric balloon with each successive instillation of 100 mL. Note the pressure at full inflation of the gastric balloon. If no air leaks are detected, fully deflate the esophageal and gastric balloons and clamp the inflation ports. If the kit comes with plastic plugs, they may be used in lieu of clamps to occlude the ports and maintain deflation of the balloon during insertion (see Fig. 41-3, step 2). Once fully deflated, coat the balloons with a thin layer of water-soluble lubricating jelly. 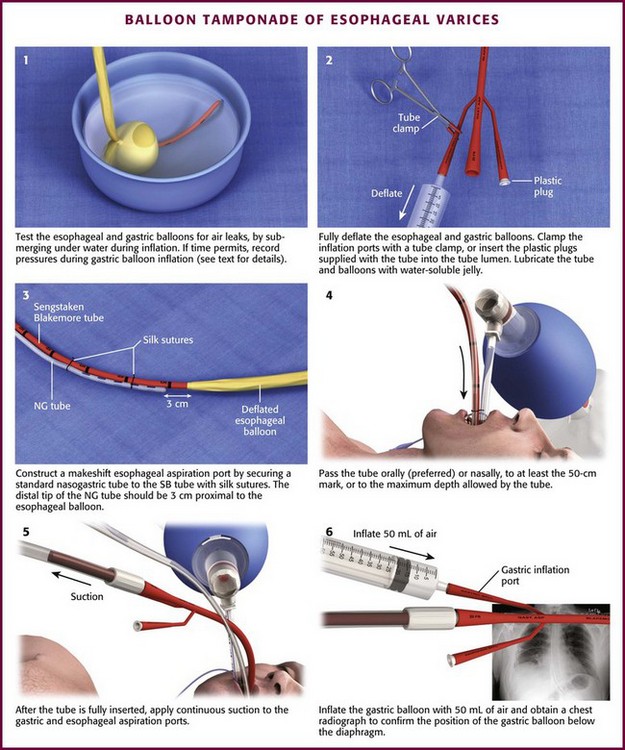 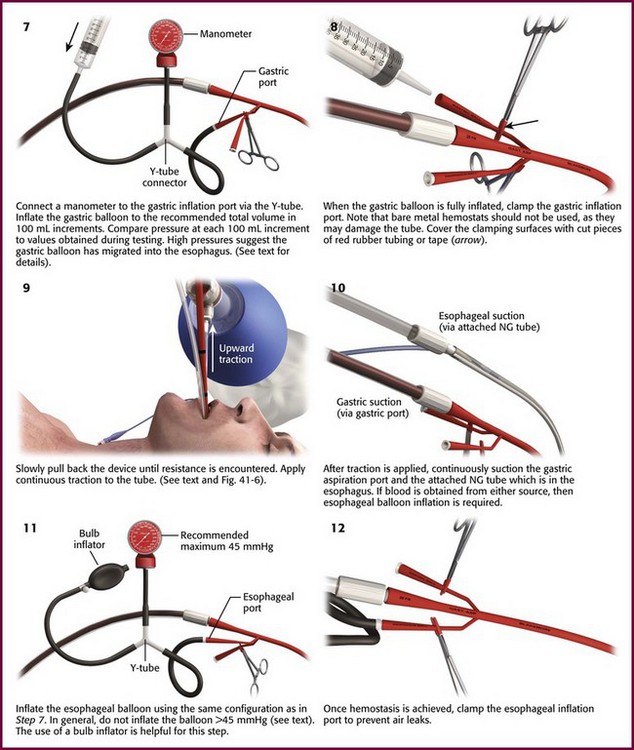