The structures that make up the anorectum are responsible for the distal storage and voluntary evacuation of feces, and maintenance of fecal continence. These functions are controlled by a complex interaction of the intrinsic and extrinsic nervous system, and include coordination of the muscles, nerves, and supporting tissues that make up the anorectum. Fecal continence is one of the most important functions of the anorectum, and is defined as the ability to retain fecal content, to perceive that the rectum is full, and to determine appropriate conditions for defecation.1 Diseases or disorders of the anorectum may cause fecal incontinence or constipation when there is a loss of coordination of the activities of the smooth and striated muscles of the anorectum. Conversely, disorders of the mucosa lining the anorectum result in signs of inflammatory disease, also known as proctitis, which are observed clinically as tenesmus, hematochezia, or frequent defecation. Because of the important social impact associated with anorectal disorders, and particularly in diseases resulting in fecal incontinence, they are an important cause of euthanasia in pet animals when the problem cannot be corrected or improved.

Anatomy of the Rectum and Perineum 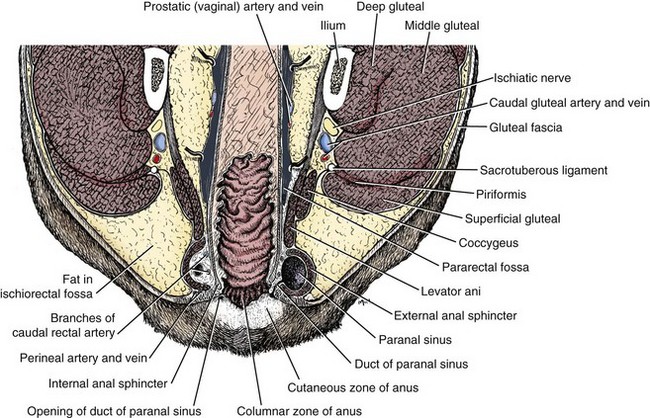 Figure 59-1 Cross-sectional anatomy of the anorectum.

Physiology of Defecation and Fecal Continence 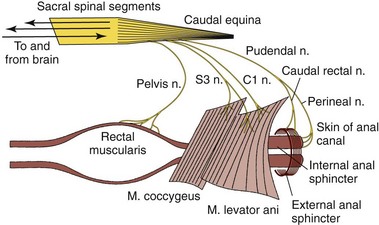 Because the anorectum is not importantly involved in digestive or absorptive processes, dogs and cats with anorectal disease do not typically manifest signs of maldigestion or malabsorption (e.g., steatorrhea, diarrhea, and weight loss). Instead, dogs and cats affected with anorectal disease manifest signs of inflammation (hematochezia, tenesmus, mucoid feces, or frequent and painful defecations) or abnormal motility (dyschezia, incontinence).

Observation of the animal during the act of defecation should be an important part of the physical examination as many pet owners misinterpret signs of anorectal disease. Pet owners frequently confuse the signs of dyschezia (painful or difficult defecation) and tenesmus (straining to defecate) with constipation. Constipation is best defined as infrequent defecation, excessively hard or dry feces, or diminished fecal volume. The finding of true constipation would be associated with a different set of differential diagnoses.

Proctoscopy is often performed in conjunction with colonoscopy because the rectum is frequently involved in canine colitis. However, discrete lesions of the anorectum may be evaluated with proctoscopy alone. Proctoscopy is technically less difficult and the instrumentation less costly than with total colonoscopy. A rigid proctoscope, for example, is sufficient for the evaluation of the anorectal structures in most patients. As with colonoscopy, the anorectum is evaluated for color, texture, friability, and bleeding. Mucosal biopsies may be readily obtained with a variety of forceps instruments. Lesions of the terminal rectum and anus can be visualized following gentle prolapse of the rectum and anus using an Allis tissue forceps, or by doing a retroflex endoscopic procedure following intubation of the anorectum and descending colon. 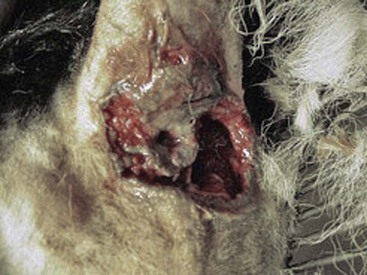 Perianal fistula (PF) most commonly affects dogs of the German Shepherd breed or German Shepherd mixed breeds, but Irish Setters, Labrador Retrievers, Old English Sheepdogs, Bulldogs, Spaniels, and Collies are also notably affected.1–5 In one study, German Shepherds accounted for 84% of the reported cases.2 PF primarily affects middle-aged to older dogs of either sex, but the disease has been described in dogs of ages ranging from 1 to 14 years.2,3,6 At this time, the effect of sex hormones on the development or maintenance of PF in dogs is still debated, but it appears that both intact and neutered animals have equal risk of developing PF.5 The cause of PF remains unknown and only partially defined, but anatomic, bacterial, endocrinologic, and immunologic etiologies have all been proposed. Similarities in clinical appearance between canine PF and human Crohn’s disease have caused speculation that these diseases may share a common immunopathogenesis.2,7–10 This notion has been further supported by clinical improvements reported in dogs treated with cyclosporine and other immunomodulating or immunosuppressive drugs (e.g., tacrolimus, azathioprine, prednisone).3,4,9–13 Evidence of immune dysregulation has been reported in some studies, including increased plasma cells, CD 3+ T lymphocytes, immunoglobulin (Ig) A- and IgG-secreting B lymphocytes, and macrophages in affected tissue.14,15 However, immunohistochemical analysis of the number and distribution of B and T lymphocytes has not revealed any simple immunologic defect.15 An alternative hypothesis has been proposed that IgA deficiency in German Shepherds predisposes this particular breed to anal furunculosis.15 This hypothesis is further supported by the findings of House et al. who showed that dogs with PF have increased expression of messenger RNA for interleukin (IL)-1β, IL-6, tumor necrosis factor-α, IL8, IL-10, and transforming growth factor-β.15 Matrix metalloproteinases (MMPs) may contribute to this tissue pathology. MMPs 2, 9, and 13 were found to be significantly increased in tissue biopsies of dogs with PF.16 MMP-9 and MMP-13 are primarily produced by macrophages, and tissue ulceration may occur as a result of the aberrant activation of macrophages in affected dogs.16 It has been suggested that pathologic macrophage activity could result from T-cell secretion of interferon-γ, which might explain why lesions resolve following cyclosporine therapy.16

Perianal fistulas are most commonly reported in middle-aged to older, large-breed dogs with a broad-based, lower tail carriage that may provide an environment conducive to worsening inflammation and infection once the disease starts. It may also contribute to the fact that the disease is often not noticed by the pet owner until obvious lesions are present, or the discharge or odor becomes overpowering. The only abnormality reported by some owners, especially early in the course of development of PF, is persistent licking of the anus. Other clinical signs that may be reported include hematochezia, dyschezia, perianal discharge, constipation, and tenesmus caused by the irritation and discomfort associated with defecation. In severely affected dogs, anorexia, weight loss, and behavioral changes may be reported as a consequence of the discomfort or associated infection surrounding perianal tissues. 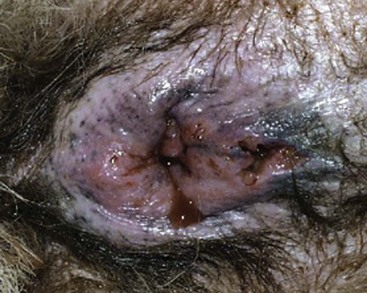 Figure 59-4 A milder version of perianal fistulas with hyperemia, a few draining tracts, and evidence of perianal swelling.

Because of the uncertain etiology of perianal fistulas, a number of medical and surgical treatments have been proposed. Previously, medical therapy included antibiotics, perineal cleansing, antiinflammatory drug therapy (e.g., prednisone), and analgesic drug therapy, all of which were palliative at best.2–424 Surgical excision was frequently cited as the only treatment option in early studies24–26; however, remission rates were highly variable (48% to 97%), complication rates were equally variable (3% to 100%), often involving fecal incontinence, rectal strictures, and delayed wound healing, and recurrence rates were generally near 50%.3,6,24–26 Cryotherapy, Nd-YAG (neodymium:yttrium-aluminum-garnet) laser therapy, and chemical cauterization have been reported with variable success, remission, and recurrence rates.27,28 Following recent accounts of successful use of cyclosporine therapy with remission rates of 72% to 100%,3,29 current therapeutic approaches have been aimed at blunting the immune response that appears to be at the core of disease development.

Immunomodulating drug therapies have been used in PF dogs, including high-dose glucocorticoids,8 cyclosporine,3,4,9,10,29 tacrolimus,12 and azathioprine (alone or in combination with antibiotics or prednisone).11,13,26,29 Low-dose prednisone therapy has been recommended for the initial treatment of the inflammatory component of PF, but as with other earlier medical therapies, low doses of prednisone were found to have mostly a palliative effect.2 Immunosuppressive doses of prednisone may be more effective, but only 33% of dogs in one study achieved resolution of disease.8 Topical tacrolimus, a potent immunosuppressive medication, achieves a resolution of lesions in 50% of dogs and improvement in as many as 90% of dogs.12 Although this approach may provide a viable alternative to other therapies, it is likely to be effective only in dogs with mild to moderate PF, and therefore is not recommended for use in dogs with more severe forms of the disease. Cyclosporine therapy may be the best therapeutic option for this disease. Early studies of cyclosporine showed that upward of 85% of dogs had complete healing with several weeks of therapy.9 Several other studies of cyclosporine, either alone or in combination with ketoconazole or other therapy (including surgery), confirmed the efficacy of cyclosporine in the treatment of canine PF.3,4,10,26,30,31 Success rates of 60% to 98% with cyclosporine have been reported, but most studies also revealed that when the drug was discontinued, recurrence rates were very high, confirming the presence of ongoing immune dysfunction. One of the persistent problems with use of cyclosporine in the treatment of this condition in dogs is the very high cost of the drug—both for the medication, and for the drug-level monitoring that is recommended to assure proper dosing. One approach to reduce the cost of cyclosporine therapy is to combine cyclosporine with ketoconazole. Because cyclosporine is transformed by the hepatic cytochrome P450 3, a mixed-function oxidase, addition of ketoconazole to the therapy acts to competitively inhibit this pathway and effectively increase the half-life of cyclosporine in dog.30 As a result, using this combination of drugs results in an equivalent therapeutic responses, but at a reduction in cost of 50% to 60%.3,30 In another study, investigators showed that cyclosporine at a dose rate of 5 mg/kg q24h is effective in reducing the surface area and severity of lesions in dogs with PF.10 However, an important finding in that study is that doses less than 5 mg/kg q24h are ineffective in resolving PF lesions. Thus, in dogs that are intolerant of ketoconazole combined with cyclosporine, single-dose therapy can be used at a slightly lower dose to make the therapy more cost-effective. Finally, because of the high recurrence rate and, in some dogs, incomplete resolution of lesions, studies have investigated using immunosuppressive therapy with concurrent surgical excision of affected tissues as a combination approach.5 In a recent study, cyclosporine therapy was administered for up to 12 weeks followed by surgical excision of any remaining draining tracts, along with cryptectomy and anal sacculectomy.26 In that study, all 18 dogs were reported to have resolution of the disease, and only one of the 18 had recurrence of the disease 9 months after completion of the therapy and surgery.26 This result suggests that there may be significant merit to using the combination of immune suppression and removal of diseased tissue to achieve the best long-term resolution.

The overall prognosis should be considered guarded in dogs with perianal fistulas, even though most methods, whether medical or surgical, have met with some degree of long-term success. The most common complications of surgical approaches are recurrence and fecal incontinence; thus, for most dogs, medical therapy with cyclosporine alone or in combination with ketoconazole should be used as the first-line approach, followed by surgical resection of residual diseased tissue once immune suppression achieves its fullest extent. In this scenario, with less-invasive surgery required, the risk of severe complications, such as fecal incontinence, is reduced, but this also increases the chances of a prolonged remission in affected dogs. 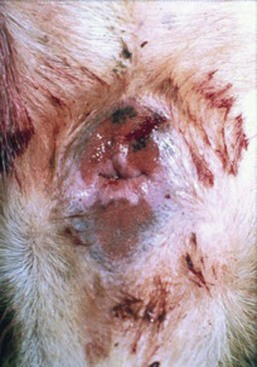