Body condition score (BCS) is an assessment of a cow’s body fat (and muscle) reserves, with low values reflecting emaciation and high values equating to obesity. The intercalving profile of BCS is a mirror image of the milk lactation profile. The BCS at which a cow calves, her nadir BCS, and the amount of BCS lost after calving are associated with milk production, reproduction, and health. Genetics, peripartum nutrition, and management are factors that likely interact with BCS to determine the risk of health disorders.

• Genetic selection for increased milk production has resulted in cows that lose more BCS in early lactation and that, consequently, are more susceptible to health disorders after calving.

• The collective data indicate that a calving BCS of 3.0 for mature cows and 3.25 for heifers with a moderate energy restriction precalving will minimize the risk of BCS-related health disorders around calving.

Reserves of adipose tissue are stringently maintained by peripherally and centrally produced hormones in accordance with the “lipostatic” theory.1 The provision of nutrients for the neonate mammal is facilitated by the catabolism of fat and muscle for a period of time postpartum. A dairy cow exhibits this mammalian tendency to nurture the neonate from her tissue stores,2 losing “condition” for approximately 40 to 100 days after calving before replenishing lost tissue reserves.3–6 What makes dairy cows distinctly unique from all other mammalian species has been the intense transgenerational genetic selection for early lactation and total milk production during the last 50 years,7 which has resulted in many physiologic changes that facilitate greater mobilization of energetically important tissues in dairy cows in comparison with other mammals.6,8 Such selection pressures have also resulted in a reduction in the health of dairy cows.9,10

This article reviews the assessment of cow condition and determines the importance of body condition score (BCS) for cow health, giving due consideration to optimum BCS management strategies that may be used to minimize the likelihood of periparturient health problems.

Although it was probably evident for centuries that cows lost and gained condition during the lactation cycle, there was no simple measure of a cow’s stored energy reserves until the 1970s.11 Body weight (BW) alone is not a good indicator of body reserves, as the relationship is affected by factors such as parity, stage of lactation, frame size, gestation, and breed.11,12 In addition, because tissue mobilization in early lactation occurs as feed intake is increasing,4,5,13,14 actual decreases in weight of body tissue can be masked by enhanced gastrointestinal fill, such that BW changes do not accurately reflect changes in adipose and weight of lean tissue. Recent work15 indicates that providing very frequent BW measurements (eg, at every milking) may help overcome some of these issues, but that for accurate assessment of adipose and lean tissue, measurements of body condition are needed.

Body condition was defined by Murray16 as the ratio of body fat to nonfat components in the body of a live animal. However, large-scale direct measurements of body adiposity were (and remain) difficult and expensive. As a result, multiple systems to subjectively appraise the stored energy reserves of dairy cattle were introduced in the 1970s and 1980s, and scores were assigned to reflect the degree of apparent adiposity of the cow; these scores were termed “body condition scores.” Lowman and colleagues17 were the first to introduce a BCS scale (0–5-point system) for dairy cows, adapting a scoring system used to rank beef cattle. Further BCS systems evolved independently across the world, with a 6-point scale further refined for the United Kingdom (0–5),18 an 8-point scale developed in Australia (1–8),19 a 5-point system established in the United States (1–5),20 and a 10-point scale introduced in New Zealand (1–10).21,22 Throughout this review, the scale of 1 to 520 is reported. Equations to convert between scales were reported by Roche and colleagues.22

As the importance of body condition to milk production, reproduction, and health of cows became better established, the BCS scales became more precise and the assessment method expanded to encompass more body regions. For example, the anatomy considered in the original scale proposed by Lowman and colleagues17 included only the spinous process of the lumbar vertebrae, the hip bones, the tail head, and the “second” thigh; most systems now include the thoracic and vertebral region of the spinal column (chine, loin, and rump), the ribs, the spinous processes (loin), the tuber sacrale (hip or hook bones), the tuber ischii (pin bones), the anterior coccygeal vertebrae (tail head), and the thigh region.22 These additional measurement sites ensure the important points identified by Lowman and colleagues17 are retained, and expand the assessment to provide a more complete picture of the energy-reserve status of the cow.

Irrespective of the scale used, low values reflect emaciation and high values equate to obesity. The effectiveness of BCS in estimating available energy reserves was outlined by Wright and Russel23 and Otto and colleagues,24 who reported a strong positive relationship (r = 0.75–0.93) between BCS and the proportion of physically dissected fat in Friesian cows. Waltner and colleagues25 also evaluated several methods for estimating “body adiposity” against recorded body-fat depots (perirenal, mesenteric, omental, subcutaneous), and reported a strong correlation between BCS and body fat (r = 0.83), with only the diameter of the fat cells in the abdominal depot (r = 0.88) superseding BCS as a method of estimating body fat.

Although modern BCS systems are more definitive than the early versions proposed, limitations of these scoring systems must still be recognized. BCS assesses the level of subcutaneous fat possessed by a cow with reasonable accuracy (r2 = 0.75–0.93 for Friesian cows),23,24 but poorly predicts intermuscular and intramuscular fat (r2 = 0.43).23 The latter stores are major depot regions containing 35% to 45% of body fat. These data, therefore, imply that BCS may be less accurate in cows with little subcutaneous fat, although changes in body fatness in these subcutaneous and “internal” depots are generally proportional, such that BCS correlates strongly with total chemical content of body fat.

To aid consistent BCS assessment, several teams have independently produced BCS educational material.21,26–28 All materials tend to be a mix of pictures and text, which detail changes in the conformation of anatomic locations regarded as important with BCS change.22 Edmonson and colleagues28 evaluated one such tool and reported consistent BCS predictions with little interassessor variability, no significant cow-assessor interaction, and no significant effect of assessor experience. However, Kristensen and colleagues29 reported improved BCS assessment and reduced interassessor variability when veterinarians were first trained by expert assessors.

Changes in a cow’s condition, measured over several weeks, provide gross information about the cow’s nutrient intake relative to its requirements during that time. Although protein and mineral stores are also used by the cow in early lactation, the most important reserve is adipose tissue. A greater understanding of factors affecting lipid metabolism therefore results in a better understanding of the factors influencing BCS mobilization and replenishment.

During periods of chronic energy deficit, key hormones and tissue responsiveness are altered to change lipid metabolism, increasing long-chain fatty acid (LCFA) mobilization into blood (ie, nonesterified fatty acids [NEFA]) to maintain physiologic equilibrium.2 This condition is known as homeostasis, the net result of which is the mobilization of adipose tissue reserves in response to the energy deficit.

Homeostatic control implies that if the nutritional environment is adequate, the lactating dairy cow can meet its energy demands from dry-matter intake (DMI), and tissue mobilization will be minimized. Thus, if homeostatic controls were the only regulator of lipid metabolism during early lactation, an increased energy intake should, in theory, abolish mobilization of body lipids. However, attempts to reduce body-lipid mobilization in early lactation (weeks 1–4 postpartum) by feeding energy-rich diets or decreasing energy output have generally not been successful,4,30–32 and severe feed restrictions during the same period have not increased BCS mobilization32; these data imply that another mechanism is involved in BCS mobilization during this early lactation period. This finding is consistent with reported effects of genetic merit for milk production and energy intake on the activity of key lipolytic and lipogenic enzymes.8,33 These data led to the conclusion that early-lactation lipolysis was largely genetically controlled, whereas enzymes involved in lipogenesis were primarily regulated by energy intake. More recent studies4 indicate a potential cow genotype by diet interaction in lipogenesis, but concur with the lack of effect of diet on the homeorhesis-regulated lipolysis initiated around parturition.

There are characteristic changes in lipid metabolism during pregnancy and lactation in most mammals. Endocrine profiles change and lipid metabolism is altered to increase lipid reserves during pregnancy; these reserves are subsequently used at the initiation of lactation.34,35 These changes occur not as a function of a changing nutritional environment, but rather as a function of physiology (ie, stage of lactation); this is homeorhetic control of lipid metabolism.2 The implication behind the concept of homeorhesis is that the animal has a genetic drive to safeguard important biological functions, such as survival of the neonate (through provision of milk) or reproduction. This drive can only be fulfilled if the necessary resources are partitioned to these functions/processes by “orchestrated or coordinated changes in metabolism of body tissue, necessary to support a dominant physiologic state.”2

Adipose tissue represents the body’s predominant energy reserve and consists of triacylglycerol (TAG)-filled cells known as adipocytes, within which lipolysis and lipogenesis are continuously occurring, resulting in constant degradation and resynthesis of intracellular TAG (Fig. 1). 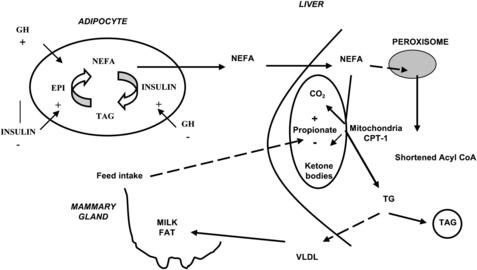 Lipogenesis occurs in ruminant adipocytes via 2 pathways: de novo synthesis and uptake of preformed LCFA from circulation. Compared with monogastric animals, who use glucose for lipogenesis, ruminants use acetate derived from rumen fermentation as the predominant carbon source for de novo fatty acid (FA) synthesis. Acetyl–coenzyme A (CoA) carboxylase, the rate-limiting enzyme in this process,36 catalyzes the formation of malonyl-CoA, the committed step in FA synthesis. Malonyl-CoA is then condensed with acetyl-CoA by FA synthase to produce the first 4-carbon acyl unit, butyrate. Additional malonyl-CoA (produced by acetyl-CoA carboxylase) are condensed with the growing acyl chain (via FA synthase) to produce longer-chain FA, resulting in palmitate as the primary product (C16:0).36

In the case of FA uptake from circulating chylomicron or very low-density lipoproteins (VLDL), endothelial lipoprotein lipase hydrolyzes plasma TAG, producing NEFA and monoacylglycerol.37 Uptake of NEFA can occur via free diffusion (known as unsaturable transport), particularly at high local concentrations, or via the membrane-bound proteins FA translocase (CD36) and FA transport protein (known as saturable transport).38 Intracellular activation to acyl-CoA or transport of the “free” LCFA is mediated by acyl-CoA synthases and binding proteins.38 There are several isotypes of the FA transport and acyl-CoA synthases and their expression, and that of the LCFA translocase changes in adipose tissue and mammary gland of dairy cows during the transition from pregnancy to lactation (eg, decrease in adipose and increase in the mammary gland).39–41 Esterification of LCFA to TAG in adipose tissue occurs through either the phosphatidic pathway or the monoacylglycerol pathway, depending on the availability of glycerol-3-phosphate and monoacylglycerol.42 Because adipose tissue lacks glycerol kinase, the main source of glycerol-3-phosphate for TAG synthesis is glyceroneogenesis, likely from exogenous lactate.43 The key enzyme in this process is cytosolic phosphoenolpyruvate carboxykinase, whose expression in adipose decreases markedly after parturition41 in line with the catabolic signals.

Tags: Metabolic Diseases of Ruminants an Issue of Veterinary Clinics
Jan 8, 2017 | Posted by admin in EXOTIC, WILD, ZOO | Comments Off on and Managing Body Condition Score for the Prevention of Metabolic Disease in Dairy Cows
Premium Wordpress Themes by UFO Themes
WordPress theme by UFO themes