The widespread availability of abdominal ultrasonography has led to increased detection of adrenal masses in human and veterinary medicine. In fact, frequent diagnosis of adrenal masses unrelated to the primary complaint has resulted in a new term in both disciplines—the adrenal incidentaloma.27 Unfortunately, the complex anatomy and physiology of the adrenal gland present a variety of challenges at every level, from diagnosis of disease conditions to decision making, perioperative care, and surgery itself. Thus, modern veterinary surgeons are often faced with the difficult task of weighing the risks and benefits of elective adrenalectomy, a procedure with significant perioperative mortality. Despite challenges associated with surgery, it is generally agreed that adrenalectomy is indicated in animals with functional tumors and those with characteristics of malignancy.27 In these instances, proper knowledge of adrenal physiology and perioperative care can improve the chances of a successful patient outcome.19

The paired adrenal glands are located in the retroperitoneal space, closely associated with the aorta and vena cava in the cranial abdomen (Figure 120-1).20 The left adrenal gland is located medial to the cranial pole of the left kidney and is loosely adhered to fascia of the psoas minor muscle and transverse process of the second lumbar vertebra. The left adrenal gland is adjacent to the left side of the abdominal aorta medially, and its caudal aspect borders the left renal artery. The right adrenal, which is further cranial than the left, is located ventral to the thirteenth thoracic vertebra and is adhered to the right side of the vena cava. In many instances, the adrenal capsule is actually contiguous with vascular adventitia.20 The right adrenal gland is covered by the caudal extension of the right lateral liver lobe; access to the region can be further complicated by hepatomegaly that accompanies hyperadrenocorticism. Both adrenal glands are also obscured by adipose tissue that accumulates in this region of the retroperitoneal space; however, they are easily identified by the beige appearance of the adrenal cortical tissue and by the phrenicoabdominal vein that crosses the ventral surface of each gland. 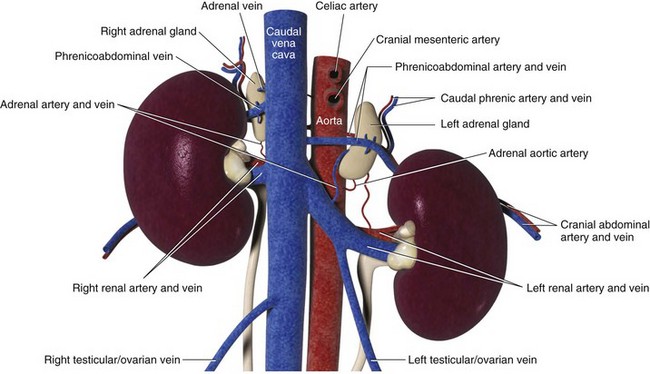 Figure 120-1 Regional and vascular anatomy of the paired adrenal glands in a dog. (Illustration by Tim Vojt.)

The microscopic anatomy of the adrenal glands reflects developmental origin and the physiologic function of this endocrine organ. The adrenal cortex is derived from a mass of mesodermal cells that arise near the genital ridges during embryonic development.20 These cells differentiate into polygonal to columnar shapes, with varying lipid content.20 The cortex takes on a laminar architecture adapted to serve specific endocrine functions, including regulation of renal fluid and electrolyte balance (aldosterone synthesis) and chronic stress adaptation and carbohydrate metabolism (steroid hormone synthesis). This mesodermal mass is later invaded by neural crest ectoderm, which migrates to the center of the gland and forms the adrenal medulla.20 As indicated by its developmental origin, the adrenal medulla is essentially a sympathetic ganglion, consisting of postsynaptic neurons that are modified to release their neurotransmitters (epinephrine and norepinephrine) into the systemic circulation through the adrenal gland’s rich vasculature.

The arterial supply to the adrenal glands consists of 20 to 30 small branches arising from the phrenicoabdominal, renal, and cranial abdominal arteries and directly from the adjacent aorta.20 These arteries form a plexus, which is visible through the thick adrenal capsule, and send penetrating branches into the cortex and medulla. Venous blood is collected in sinusoids and drains into a single adrenal vein. The right adrenal vein empties directly into the vena cava, and the left adrenal vein empties into the left renal vein.

The adrenal cortex is divided into three zones: the outer zona glomerulosa, which secretes mineralocorticoids, and the central zona fasciculata and inner zona reticularis, which secrete glucocorticoids and sex steroids. The majority of glucocorticoids are produced within the zona fasciculata. Adrenal corticoids are synthesized from cholesterol. Enzymatic cleavage of a carbon side chain within mitochondria produces the C-21 steroid pregnenolone. Within cells of the zona fasciculata and zona reticularis, pregnenolone is hydroxylated at C-17 to form the glucocorticoid molecule. Zona glomerulosa cells lack 17α-hydroxylase; absence of a hydroxyl group on C-17 is the major difference between aldosterone and cortisol.

Because steroid hormones are lipids, transport through blood relies on binding to plasma proteins. Corticosteroid-binding globulin, or transcortin, has a high affinity to cortisol. Consequently, 75% of cortisol in the plasma is bound to transcortin and 15% to albumin, with approximately 10% unbound. Transcortin transports only 10% of aldosterone; the majority is transported bound to albumin (50%) or remains in its free state (40%). Transcortin is affected by a variety of physiologic states, including pregnancy, which increases its hepatic synthesis, and liver dysfunction, which decreases it. Clearance half-lives of cortisol and aldosterone are 60 and 20 minutes, respectively. The liver is important for metabolism of these hormones into their less active states.

Under normal circumstances, the amount of androgens and estrogens synthesized by the adrenal cortical cells is small; however, synthesis can increase dramatically in pathologic conditions.

The primary actions of catecholamines include response to acute stress and regulation of intermediary metabolism, particularly in response to hypoglycemia. Actions are mediated through alpha- and beta-adrenergic receptors on target tissues. Alpha-1 and alpha-2 receptors control catecholamine release from presynaptic and postsynaptic sympathetic nerve endings. Beta-1 receptors primarily affect the heart, and beta-2 receptors affect intermediary metabolism and smooth muscle contraction. Epinephrine is about 10 times more potent on beta-2 receptors than norepinephrine, so it is more important in controlling metabolism. At beta-2 receptors, epinephrine increases blood glucose concentrations, particularly by promoting hepatic glycogenolysis and gluconeogenesis. Epinephrine also stimulates glycogenolysis in skeletal muscle, with subsequent production of lactate that is converted by the liver to glucose. Epinephrine inhibits insulin secretion (via alpha-2 receptors), stimulates pancreatic glucagon secretion to increase blood glucose concentrations, and promotes lipolysis to increase free fatty acid concentrations in the blood.

Identification of An Adrenal Mass

Adrenal masses are most commonly identified during ultrasound examination of the abdomen and less commonly with computed tomography (CT) or magnetic resonance imaging (MRI) (Figure 120-2). Clinical signs, findings on physical examination, results of routine blood and urine tests, or a combination of these may suggest adrenal disease (e.g., hyperadrenocorticism) and the need for diagnostic imaging. Alternatively, the adrenal mass may be an unexpected finding during abdominal ultrasonography that is performed for another reason (e.g., persistent vomiting). Regardless of how an adrenal mass is discovered, determining the functional status of the mass is critical to ensure appropriate perioperative management of the case and to improve the likelihood of a successful outcome after adrenalectomy. 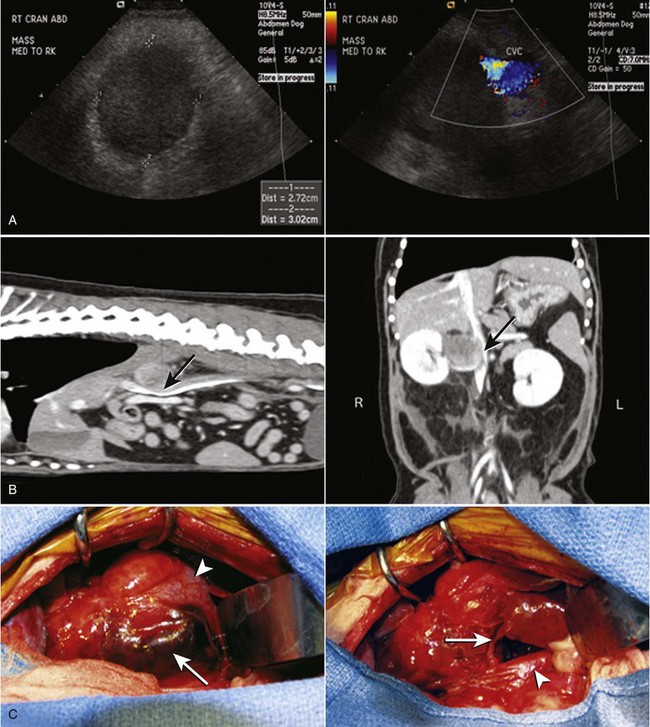 Figure 120-2 Typical imaging and surgical findings in a dog with a 3.0- × 2.7-cm right-sided adrenal pheochromocytoma. A, A round hypoechoic mass is found cranial and medial to the right kidney. Doppler ultrasound technique indicates severe compression or invasion of the adjacent vena cava. B, Sagittal and dorsal reconstructions of contrast-enhanced, computed tomography images from the same dog show similar findings, with medial and dorsal compression of the caudal vena cava (black arrow) in both planes. In the dorsal reconstruction, filling defects in the vena cava are suggestive of possible tumor invasion. C, In the surgical photograph to the left, the adrenal mass (white arrow) is located between the kidney (white arrowhead) and vena cava, causing significant extraluminal compression of the cava and stretching of the renal artery and vein. Further dissection revealed that the mass had not invaded the vena cava, and resection was completed without complications. The image to the right depicts the preserved renal vasculature (white arrow) and vena cava (white arrowhead) after removal of the mass.

Adrenal asymmetry may represent a functional neoplasm; however, other differential diagnoses include hypertrophy of normal tissue, granuloma, cyst, hemorrhage, or an inflammatory nodule. Adrenalectomy is the treatment of choice if an adrenal mass is malignant and has not metastasized, but adrenalectomy may not be indicated if the mass is benign, small, and hormonally inactive and has not invaded surrounding structures. Unfortunately, it is not easy to determine if an adrenal mass is malignant or benign before surgical removal and histopathologic evaluation. Guidelines to suggest malignancy include mass size, invasion of the mass into surrounding tissues and blood vessels, and identification of additional mass lesions with abdominal ultrasonography and thoracic radiography. The bigger the mass, the more likely it is malignant and the more likely metastasis has occurred, regardless of findings on abdominal ultrasonography and thoracic radiography.

Adrenal tumors may secrete a hormone or may be nonfunctional. Excess secretion of cortisol, catecholamines, aldosterone, progesterone, and steroid hormone precursors have been documented in dogs and cats (Table 120-1). Clinical presentation and results of routine blood and urine tests often provide clues to the functional status of the adrenal tumor. The most common functional adrenal tumors in dogs secrete cortisol or catecholamines.

Dogs with a cortisol-secreting adrenal tumor have clinical signs of hyperadrenocorticism, including polyuria, polydipsia, polyphagia, panting, abdominal enlargement, endocrine alopecia, mild muscle weakness, and lethargy.12 Findings on routine blood and urine tests include the presence of a stress leukogram, increased serum alkaline phosphatase activity, hypercholesterolemia, isosthenuria or hyposthenuria, and proteinuria.12 Abdominal ultrasonography will reveal a variably sized adrenal mass, typically ranging from 1.5 to greater than 8 cm in maximum width. The mass may compress or invade adjacent blood vessels and organs; these findings are suggestive of carcinoma (see Figure 120-2).23 Asymmetry in the size of the adrenal glands is typical. Ideally, the contralateral unaffected adrenal gland is small or undetectable (maximum width, typically <0.3 cm) as a result of adrenocortical atrophy induced by hypercortisolism. However, a normal-size contralateral adrenal gland does not rule out hyperadrenocorticism caused by an adrenal tumor. Rarely, bilateral cortisol-secreting adrenal tumors are present.

A total of 80% to 85% of dogs with naturally occurring hyperadrenocorticism have the pituitary dependent form (pituitary-dependent hyperadrenocorticism). In these dogs, excessive secretion of adrenocorticotropic hormone (ACTH) by the pituitary gland causes bilateral adrenal hyperplasia and excessive glucocorticoid secretion. Functional adrenal adenomas and carcinomas, however, secrete excessive amounts of cortisol independent of pituitary control. Negative feedback by cortisol will suppress hypothalamic cortisol releasing hormone and circulating plasma ACTH concentrations; however, it will not suppress cortisol secretion of functional tumors. As a result, the cortex of the uninvolved adrenal gland and the normal cells of the affected adrenal gland should atrophy.