Yersinia pestis (Plague) and Other Yersinioses

Yersinia pestis (Plague) and Other Yersinioses

First Described: Descriptions of plague date back to around 1300 bc. The causative agent was isolated in 1894, in Hong Kong (Alexandre Yersin).1

Major Mode of Transmission: Flea-borne, via an enormous variety of rodent flea species; ingestion of infected rodents or rabbits by cats and dogs

Human Health Significance: A small percentage (10%) of human plague cases result from exposure to infected cats, through bites, scratches, or respiratory droplet inhalation from cats with pneumonic plague. Dogs and cats can also expose humans through the carriage of infected fleas into households (especially sleeping areas).

The genus Yersinia includes 11 different species, three of which are pathogenic in humans, cats, and dogs: Yersinia pestis and the enteropathogenic species Yersinia pseudotuberculosis and Yersinia enterocolitica. Yersinia spp. are nonmotile, gram-negative coccobacilli that belong to the family Enterobacteriaceae. Only Y. pestis is transmitted by arthropod vectors.

Yersinia pestis causes plague, which is maintained in wild burrowing rodents in rural regions of Asia, Africa, and the Americas (Figure 55-1). There is no plague in Australia, and the last case of plague in Europe was reported after World War II. The organism is transmitted between rodents by rodent fleas; humans, dogs, and cats are usually accidental and “dead-end” hosts (although direct transmission can occur through aerosols in humans and cats with pneumonic disease). Fleas become infected when they feed on heavily bacteremic rodents. The organism replicates in the flea intestine and creates a blockage of the intestinal tract, which causes the “starved” flea to repeatedly and aggressively feed and regurgitate bacteria into the bite site of a new host.2 A large number of flea species can transmit Y. pestis, but some flea species, such as the Oriental rat flea (Xenopsylla cheopis) worldwide and the ground squirrel flea (Oropsylla montana) in the western United States are particularly efficient vectors. Although nowhere near as efficient as these two fleas as a vector, the cat flea (Ctenocephalides felis) can infest rodent reservoirs and also has the potential to transmit Y. pestis.3 Y. pestis attains very high concentrations in rodent blood (108 organisms/mL) before death of the rodent occurs, which allows fleas to acquire sufficient numbers of bacteria for efficient transmission to other rodents.4 Fleas can remain infected for more than a year, which permits transmission long after the death of an infected rodent. 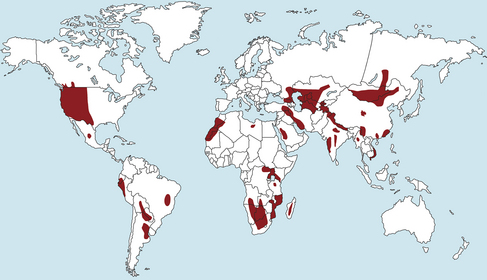 Plague is transmitted to cats or dogs when they ingest infected mammals (especially rodents or rabbits) or less commonly, after the bite of a rodent flea. Humans are infected by (1) the bite of an infected flea; (2) direct contact with contaminated tissues (such as handling dead rodents, rabbits, or other dead wild mammalian carnivores); or rarely (3) inhalation of respiratory secretions by infected animals, especially cats (Figure 55-2). Death of a rodent from plague can cause the rodent’s fleas to bite humans and other animals in a search for an alternative blood meal. 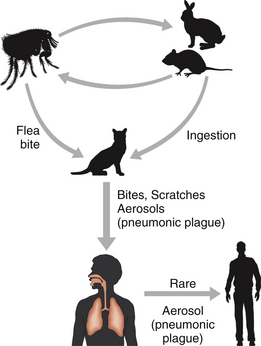 FIGURE 55-2 The role of the cat in transmission of Yersinia pestis to humans. Most humans are infected by direct contact with wildlife reservoir hosts or a bite from an infected flea, but infections can also occur as a result of cat bites or direct exposure to cats that have pneumonic plague. Dogs can also be infected but are less susceptible than cats to disease and shedding. Direct aerosol transmission from one human to another is rare and only occurs in humans that have terminal pneumonic plague.

In the United States, plague in humans, dogs, and cats is now uncommon, although it is likely underrecognized in dogs and cats. Cats are considerably more susceptible to disease than dogs. Affected cats can be of any age, breed, and sex, with a mean age of 3 years in one case series.5 Most plague cases in humans and cats occur in the southwestern United States, particularly northern New Mexico, but also southern Colorado, northern Arizona, and to a lesser extent California, southern Oregon, and western Nevada (especially in the Sierra Mountain ranges) (Figure 55-3). The probability of an area in the United States being a high-risk plague habitat increases with elevation up to 2300 meters and declines as elevation increases thereafter.6 Rodent or rabbit species associated with human cases include white-tailed antelope squirrels, ground squirrels, rock squirrels, cottontail rabbits, jack rabbits, prairie dogs, deer mice, Colorado chipmunks, and wood rats.2 The prevalence of antibodies to Y. pestis in a survey of 4115 dogs and 466 cats from California in the mid-1990s was less than 5% in both species.7 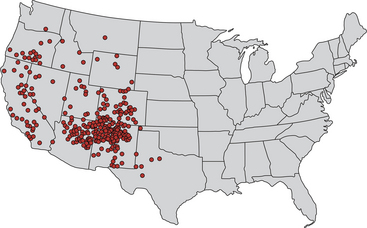 In general, plague has a seasonal distribution that correlates with the timing of epizootics that lead to a die-off of susceptible rodents. In the United States, most plague cases occur from February through August, when rodents and their fleas are most active and humans and their companion animals are more likely to be outdoors. In general, the organism does not survive well in the environment outside infected hosts, with survival less than 72 hours on hard surfaces.8 However, Y. pestis survived at least 24 days in blood-contaminated soil that was protected from UV light.9 The extent to which environmental survival of Y. pestis contributes to the geographic distribution and epidemiology of the disease requires further clarification.

After inoculation into the mammalian host by fleas, Y. pestis is taken up by mononuclear cells, in which it survives, replicates, and produces F1 capsular envelope antigen. The envelope allows it to further resist phagocytosis. Cats and dogs usually become infected after they ingest bacteremic rodents or other wildlife species that may have died of plague. In this situation, the organism has already produced a capsule and disseminates more rapidly than occurs after flea-borne transmission. Organisms are carried by lymphatics to regional lymph nodes. In more than half of affected cats, this results in an intense neutrophilic inflammatory response, variable fever, inappetence, and formation of the bubo, which is an enlarged and tender lymph node that occasionally forms an abscess and drains purulent material. This form of disease is known as bubonic plague and is the least fatal form of the disease. The location of the bubo(es) depends on the initial site of infection. In cats that ingest infected rodents, the mandibular or retropharyngeal lymph nodes are usually involved, and affected cats shed bacteria from the oropharynx. Less often (around 20% of cats with bubonic plague), other peripheral lymph nodes are involved; this may follow flea-borne transmission that occurs at sites distant to the head.5

In some cats, bubo formation is accompanied by bacteremia, with associated endotoxemia and sepsis, and formation of hemorrhagic, neutrophilic, and necrotizing lesions in many organs. Disseminated intravascular coagulation and multiple organ failure can then ensue. Signs of severe sepsis or septic shock in affected cats include tachypnea, vomiting, tachycardia or bradycardia, and weak pulse quality. In some situations, bacteremia and multiple organ involvement occurs in the absence of identifiable buboes (septicemic form), which has a high mortality rate. Pneumonic plague occurs in about 10% of affected cats as a result of hematogenous spread of bacteria to the lungs or, less often, by inhalation of organisms and can result in dyspnea and cough. The incubation period for plague is estimated to be 1 to 6 days, with shorter incubation periods after ingestion or inhalation of the organism, and death can occur in as few as 2 to 3 days in the absence of appropriate treatment; occasionally the clinical course extends for 2 to 3 weeks. Some (<20%) of cats show no signs of illness, or there may be transient fever, decreased appetite, and recovery. Transient febrile illness is also common in dogs.

Physical examination in cats with plague reveals lethargy (82% of cats), fever (71% of cats; mean rectal temperature of 105.1°F [40.5°C]), dehydration, a thin body condition, and lymphadenopathy. Lymphadenopathy most often involves the mandibular nodes. In one case series, 33% of 67 cats with bubonic plague had bilateral lymphadenopathy, 32% had left-sided lymphadenopathy, and 13% had right-sided lymphadenopathy; in the remainder of cats, the location was not known.5 Bilateral disease occurred only when the mandibular and cervical nodes were involved. Lymph nodes may be markedly enlarged (up to 8 cm, with a mean of around 4 cm); may be edematous, abscessated, and painful on palpation; and may drain purulent material. Drainage was reported in 6 (15%) of 40 cats with bubonic plague. Dyspnea or tachypnea can be present in cats with pulmonary involvement or possibly as a result of painful lymphadenopathy. Other reported physical examination abnormalities in cats with plague include ocular or nasal discharge (14% of cats) and abscesses that involve sites other than the lymph nodes, such as the sublingual region or the tongue, oral cavity, face, limbs, or trunk. Physical examination findings in dogs suspected to have plague have included fever, lethargy, mandibular or cervical bubo formation, oral ulceration and ptyalism, and cough.10