Mode of Transmission: Most often ingestion of uncooked pork by-products or pig carcasses

Human Health Significance: Humans appear to be resistant to infection with suid herpesvirus-1.

Pseudorabies (Aujeszky’s disease) is a notifiable disease caused by the alphaherpesvirus suid herpesvirus-1 (SuHV-1). Swine are the natural hosts for SuHV-1, but other domestic and wild mammals, including ruminants, dogs, cats, raccoons, rabbits, and rodents, are susceptible to infection and fatal encephalitis. The name pseudorabies was applied because the clinical signs caused by the virus in rabbits resemble those of rabies. SuHV-1 has been eradicated from domestic swine through use of vaccination programs in many countries, including Finland, Sweden, Norway, the Netherlands, Denmark, Austria, Switzerland, Germany, Hungary, Slovakia, the United Kingdom, Canada, the United States, and New Zealand. The virus continues to circulate among wild boar and feral swine, which act as a reservoir for the virus.2 Australia is also free of pseudorabies. Aujeszky’s disease is a widespread problem in domestic swine herds in Asia, Latin America, and some parts of Europe.2

SuHV-1 is shed in the saliva and nasal discharges of swine, and transmission can occur by direct contact with these discharges or aerosols, or ingestion of infected swine carcasses or other infected animals, especially wildlife. The virus can survive on fomites and in carcasses for several weeks. In swine, clinical signs depend on the age at exposure and virus strain. Subclinical infections and shedding occur commonly. When older pigs do develop signs, they typically develop respiratory disease. Encephalitis occurs in piglets or in adult pigs that are infected with virulent strains. Reproductive disease and fetal loss can occur in pregnant sows. Recovered pigs develop latent infection of neuronal tissues with reactivation and shedding of virus in semen and nasal, oral, or vaginal secretions following stress.

Disease in dogs is uncommonly reported. However, clusters of affected dogs have been described over the past decade, primarily in hunting dogs that contact wild swine from parts of Europe (France, Germany, Belgium) and the southern United States (Florida and Oklahoma).2-7 This has followed global expansion of wild swine populations. Disease in dogs may be more likely to occur in regions that are densely populated with wild swine, such as the southern United States (Figure 25-1) and parts of Europe such as Germany, France, Spain, Poland, and the Czech Republic.2 Dogs that reside on swine farms may also become infected.8 In some reports, packs of dogs have been infected after consumption of uncooked offal from infected pigs or pig carcasses.9,10 Dogs of any age, sex, and breed can develop disease, but dog-to-dog transmission does not occur. Cats can be infected after ingestion of pork waste or infected rodents, but reports of naturally occurring Aujeszky’s disease in cats are extremely rare.11 Because subclinical infections and nonspecific signs are common in swine, identification of pseudorabies in dogs may be the first indication that disease is present in a swine herd or wild swine population. 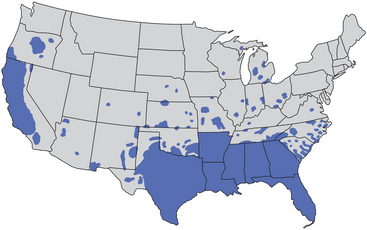 After inhalation or ingestion, SuHV-1 replicates in the oropharynx and is taken up by sensory nerve endings. It then travels by retrograde axonal transport to the sensory nerve ganglia and then to the central nervous system (CNS), which results in ganglioneuritis and encephalitis, especially within the brainstem. Infection can also lead to ganglioneuritis of the cardiac autonomic plexuses with associated myocardial degeneration,12 as well as degeneration of intestinal myenteric ganglia.10 Clinical signs appear after a short incubation period that typically ranges from 1 to 6 days, but incubation periods up to 10 days have been reported.9 The duration of signs ranges from 6 to 96 hours.13 The most commonly reported sign is hypersalivation. This occurs in most affected dogs, although it may not be present early in the course of illness.10,13,14 Other signs include lethargy, fever, dysphagia, gastrointestinal signs, muscle stiffness, ataxia, head-pressing, vestibular signs (circling, head tilt, nystagmus), recumbency, intense pruritus and self-mutilation, vocalization, behavior changes such as pacing and aggression, and tachypnea or respiratory distress (Box 25-1). Uncommonly, apparent blindness, facial paralysis, ptosis, photophobia, abnormal facial sensation, and lacrimation occur. Pruritus generally occurs on the face but can also occur on the shoulder and forelimbs.10,13 The pruritus may result from infection of neurons that innervate those regions.15 Gastrointestinal signs are common and include vomiting and diarrhea, which may be hemorrhagic (e.g., hematemesis or melena).6 Seizures and coma may also occur. A variety of cardiac arrhythmias have been reported in experimentally infected dogs, which include ventricular premature complexes, ventricular tachycardia, sinus arrest, atrial tachycardia, atrial fibrillation, wandering pacemaker, second-degree heart block, T- and P-wave abnormalities, and atrioventricular dissociation.12 Although facial pruritus is considered a classic clinical sign, in one case series, it was present in only 18% of dogs.14 Death occurs within 96 hours (and usually 48 hours) after the onset of clinical signs. Sudden death may occur, possibly as a result of acute myocarditis.9,14