Overview of Papillomatosis in Dogs and Cats

First Described: The transmissibility of canine papillomaviruses was described in the late 1800s; electron microscopic descriptions occurred in the late 1960s1,2

Mode of Transmission: Cutaneous or mucosal inoculation through trauma

∗SCCs, squamous cell carcinomas. The majority of SCCs in dogs and cats have not been associated with papillomavirus infection. 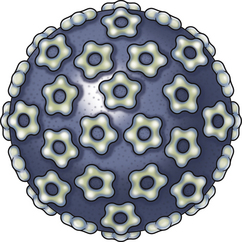 FIGURE 26-1 Structure of a papillomavirus. The virus is non-enveloped and has a icosahedral capsid composed of two different capsid proteins (L1 and L2).

Spectrum of Papillomavirus Types and Disease Associations in Dogs

Infection with papillomaviruses follows inoculation of the virus through microabrasions in the skin caused by physical trauma. Initial infection and viral amplification occurs within keratinocytes of the stratum basale.35 As basal keratinocytes undergo differentiation, early viral proteins (E proteins) are expressed and associate with regulators of the cell cycle to stimulate cell cycle progression.35 This leads to enhanced proliferation of cells in the stratum spinosum and stratum granulosum, with accumulation of infected cells and papilloma formation (Figure 26-2). With the exception of feline sarcoids, which remain as latent (or nonproductive) infections, late viral products, including the virus capsid proteins (L1 and L2), are first expressed in cells of the stratum spinosum. Papillomaviruses are nonlytic viruses, and mature virions are shed with cells that exfoliate from the stratum corneum or the nonkeratinized cells of the mucous membranes. Infected cells develop a characteristic cytopathic effect, which consists of cytoplasmic vacuolization. Tens of thousands of virus particles are produced by each infected cell. Malignant transformation occurs as a result of the effect of certain viral products (also known as oncoproteins) on host cellular signals that are responsible for regulation of the cell cycle and/or apoptosis.36 For example, some papillomavirus types produce proteins that degrade p53 and retinoblastoma protein (RB), which are important tumor suppressors.37 In human papillomavirus infections, accidental integration of the human papillomavirus (HPV) genome can occur into host cell DNA, although this does not seem to be necessary for oncogenesis.36 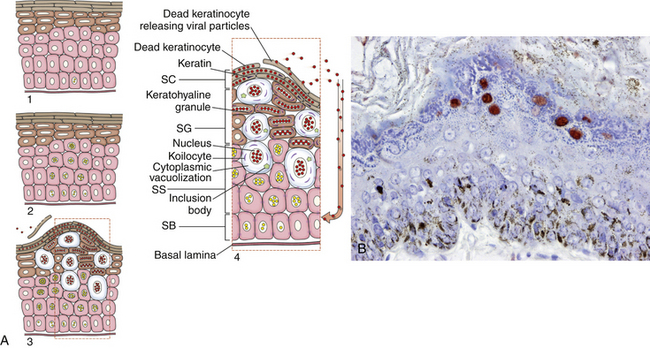 FIGURE 26-2 Schematic representation of the events of papillomavirus infection in the epidermis. A, (1) The primary infection occurs in a cell of the stratum basale (SB) after the virus gains entry via a microabrasion. The virus replicates and produces only early proteins, which leads to increased cellular proliferation. (2) Progeny of the initial infected cells migrate laterally and move upwards, where they accumulate in the stratum spinosum (SS) and stratum granulosum (SG). (3) Cellular differentiation ultimately occurs, and large numbers of virions are produced in association with papilloma development. Virions are shed with exfoliating keratinocytes of the stratum corneum (SC). (4) Detail from 3. B, Immunoperoxidase staining of papillomavirus antigen in a cutaneous plaque from a dog. (B courtesy of Luff J, University of California, Davis. In MacLachlan NJ, Dubovi EJ, eds. Fenner’s Veterinary Virology, 4 ed. Burlington, MA: Academic Press [Elsevier]; 2011.)

Oral papillomas most commonly occur in young dogs and often regress spontaneously over a 4- to 6-week period.7 They can also occur as a result of immunosuppression, such as after treatment with cyclosporin, less commonly chronic glucocorticoid treatment, or chronic infection with Ehrlichia canis. Rarely, papillomas in the caudal oropharynx obstruct respiration (Figure 26-3). Cutaneous pigmented plaques, to which pugs and miniature schnauzers are predisposed, are generally not of clinical significance but in some situations can progress to SCCs.19,38,39 Cutaneous exophytic and endophytic papillomas usually occur as solitary masses.7 Exophytic papillomas are proliferative nodules, whereas endophytic papillomas are cup-shaped lesions with a central, keratin-filled pore (Figure 26-4). Feline plaques are flat, often pigmented lesions that resemble canine papillomas histologically. Feline sarcoids are tumors that resemble equine sarcoids. Multicentric BISCs appear as multiple, hyperpigmented plaquelike lesions.

FIGURE 26-3 A, Oral papillomas in the pharyngeal region of a 5-year-old male neutered Boston terrier that was receiving chronic glucocorticoid treatment for a temporal lobe glioma. B and C, Histopathology of the lesions revealed hyperkeratosis with increased keratohyalin granules and multifocal intracytoplasmic inclusion bodies, as well as secondary bacterial infection (not shown). (Courtesy of the University of California, Davis Veterinary Dermatology and Neurology Services.) 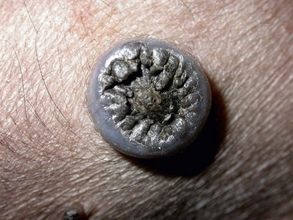