Endemic to New Zealand, kiwi are small to medium-sized, flightless, nocturnal birds.6 They may live in native forests, scrub, or rough tussock and inhabit areas from sea level to subalpine.17 Adults will live on average 20 years in the wild but may live up to 40 years.34 Kiwi are thought to be an early offshoot from the evolutionary line of the primitive flightless ratites but appear to be more closely related to the emu than the moa.32

Table 27-1 Common and Scientific Names and Distribution of Kiwi

The range and numbers of kiwi have declined since humans arrived in New Zealand. Forest clearance has reduced available habitat and produced fragmented populations. However, the most important factor is the introduction of predators. Possums damage eggs; mustelids and feral cats kill young chicks; and dogs and ferrets may kill adults. Up to 95% of all kiwi chicks are being killed within the first 2 months of life in some areas.2

All six taxa of kiwi are threatened in the wild in New Zealand.19 The North Island brown kiwi is classified as “seriously declining,” at a rate of 5.8% per year, mainly from intense predation of young birds in the first 6 months of life.32 The Okarito brown kiwi and the Haast tokoeka are classified as “nationally critical,” and the great spotted kiwi and southern tokoeka are classified as “gradually declining.” The little spotted kiwi have an increasing population size because of their location on predator-free islands.29

Because of this wild population decline, the Kiwi Recovery Plan was launched in 1991 with the aim of “maintaining and, where possible, enhancing the current abundance, distribution and genetic diversity of Kiwi.”10,31

Operation Nest Egg was established to “head start” two kiwi taxa: the North Island brown kiwi and Okarito brown kiwi. Eggs are removed from wild kiwi nests, incubated in artificial incubators, and raised in captivity. Birds are released as subadults, usually weighing in excess of 1 kg (2.2 lb).14 At this stage they are less likely to be killed by a stoat or a cat, but released birds must still be managed, especially when they may be reached by domestic dogs and ferrets. The first release of captive-reared chicks took place in 1995 and has been highly successful.32 Ten captive institutions have been involved in this successful conservation program.

Kiwi were first held in captivity in London Zoo in 1851, but the first captive breeding did not occur until 1945.14 Currently, kiwi are more often held in New Zealand institutions, and only 13 zoos hold kiwi outside New Zealand (Table 27-3).14 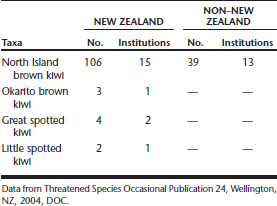 Kiwi have several unusual physical features. All taxa share the following general characteristics: small eyes but good night and day vision; large ears with a good sense of hearing; a well-developed sense of smell, the nostrils being uniquely placed at the tip of the long, sensitive bill; feathers with unlinked barbs on a single rachis that is easily shed; vestigial wings rendering them flightless; no external tail; and short, powerful legs with three forward-pointing toes equipped with sharp claws.32 Females tend to be 20% to 30% heavier and larger than males and produce one of the largest eggs in proportion to female body weight (eggs weigh about 15%-20% of female weight). Chicks hatch as miniature adults. Females also have paired functional ovaries that are thought to ovulate alternately, and males a distinct phallus that may be used for sexing. Kiwi also have a remnant of a diaphragm, and their body temperature and metabolic rate are lower than in most birds (Table 27-4).

Kiwi live in pairs, which is site specific, and they maintain and protect permanent territories. During the day they sleep in burrows, but as twilight appears, they become active and begin probing the soil and leaf litter for food with their long bill, often making snorting noises as they exhale soil. They are usually only active for the first part of the night, approximately 4 to 6 hours. Vocally most active in the first 2 hours of darkness, kiwi have sexually dimorphic calls that may transmit up to 1.5 km (0.9 mile) in ideal conditions.32 Birds tend to be most vocal in winter and spring. Juveniles are usually silent in their first year, and some nonterritorial adult or subadult birds rarely call. Birds on nests do not call.

Kiwi reproductive behavior varies between taxa.17 During courtship, a pair often remain together for hours, making loud grunts and snuffling sounds. The male and female of a pair often feed separately at night but spend about 20% of days together. Pairs are monogamous, which persists throughout the year and between years. Most eggs are laid between May/June and January, with Okarito brown kiwi laying as late as February.

North Island brown kiwi and little spotted kiwi may lay two eggs 2 to 4 weeks apart, whereas other taxa lay only one egg. The large white eggs (125 × 78 mm; 375-430 g) are laid in either a burrow or a hollow log, or sometimes under dense vegetation. Incubation is generally by the male but may be shared by the female in some taxa, and the incubation period may range from 65 to 80 days.30

The chick hatches fully feathered, stands upright within 6 hours, and walks freely by 1 to 2 days. Chicks have a large internal yolk sac that is gradually absorbed over the first 10 days of life. They remain in the nest for about a week before venturing out unaccompanied. The birds are never fed by the parents. Usually the bird returns to the nest for several weeks but may stay away for the odd day. Chicks seem to stay close to their natal territory for at least 6 to 9 months before dispersing to find a vacant territory. Growth continues for at least 24 months.

Traditionally, captive-bred eggs have been incubated, but with the advent of Operation Nest Egg, there has been a need to establish standard protocols. The principles of incubation are similar to other species, with a few exceptions. Eggs are dipped in disinfectant (Antec Superhatch Chickguard, NRM, Private Bag 99927, Auckland, NZ) at a temperature of 43° to 44°C for no more than 5 seconds. Eggs are candled, and the air cell is outlined lightly with a soft pencil. The egg is then placed on a clean, flat surface and allowed to find its center of gravity. A pencil line is drawn down the egg’s length, indicating top center.

An egg should lose 12% to 16% (0.6-1.2 g/day) of its fresh weight before it internally pips. Hatching takes place in the incubator; the humidity may be increased to 60% when the chick has externally pipped. Wads of cotton may be used to stabilize the egg, which prevents it from moving around. Brooder matting is placed on the bottom of the incubator so that the chick may get traction. Once hatched, the chick is weighed (and thereafter daily for the first 3 weeks) and moved into a Brinsea TLC brooder set at 34°C. After 24 hours the temperature is reduced to 30° to 32°C. After 2 to 3 days the brooder temperature is reduced to 20° to 24°C. After 4 days the chick is moved to a soil-lined brooder with an ambient temperature of 18° to 20°C, where it will stay for 3 weeks. Small stones are added for the chick to ingest, and adult food (cut into smaller pieces) is offered from day 8.

Chicks kept too warm are usually lethargic and slow to eat. It is normal for chicks to lose 25% to 30% of their weight in the first 10 to 12 days. Force feeding should be considered if the weight loss exceeds this percentage.32 After 3 weeks, chicks should have gained their hatch weight and may be moved to an outdoor enclosure.

When possible, all facilities should approximate the wild habitat as closely as possible. Kiwi may be housed singly or in pairs. However, it is important to note that introducing a pair together may lead to major injury or death. During the day, kiwi sleep in a small, rectangular burrow (∼1 m × 30 cm × 45 cm), which may be placed on or under the ground, as long as it is well sheltered from excessive heat and rain. More than one burrow should be offered. The roof should slope if outdoors and must have access for caregivers so that the bird may be checked or caught.

A dry, leaf litter substrate provides a cool, dry habitat and should be replaced regularly. Kiwi are usually kept in two types of enclosure: nocturnal display and off display. It is usual practice to exchange display birds so that they may be offered fresh ground off display to exhibit unrestricted normal behaviors. Each enclosure should be well planted to provide cover. Temperature, humidity, and photoperiod should vary seasonally if on display. These areas should have a concrete floor, covered with a deep layer of soil and leaf litter, which is replaced at regular intervals to reduce parasite buildup. Lighting should mimic both the photoperiod and night length so that kiwi may be seen when they are most active, in the first few hours of darkness. The environmental temperature should be controlled to ensure it is between 5° and 20°C and should vary over the day and between seasons. Artificial ultraviolet (UV) lighting should be offered for short periods during the day if on display. Kiwi are likely to return to their burrows after only a few hours and thus be off display; a second display area with a staggered daylight period may then be used. Ventilation should be adequate. Double-glazed windows are important for exhibits to reduce vibration and noise. Sufficient activities and furniture should be provided to prevent repetitive behaviors; if these occur, birds should be moved to an off-display area.