Vascular pathology in avian species includes a spectrum of lesions and etiologies similar to conditions in mammals. Of these conditions, atherosclerosis is the most common vascular change across the class Aves.

Arteriosclerosis is a loss of arterial elasticity caused by intimal thickening. This thickening results from migration of smooth muscle cells from the tunica media and increased mitotic division of these cells. Intimal expansion occurs from elaboration of increased extracellular matrix (ECM).18 Arteriosclerotic plaques of varying size, composed primarily of fibrous tissue between the intima and internal elastic lamina, are common findings in many birds. These plaques can form in chickens as young as 4 weeks of age. The plaques are appreciated grossly as pale areas of increased thickening of the intima, most often in the aorta and major arteries.15 These plaques may extend as circumferential lesions with marked luminal narrowing (Figure 25-1). 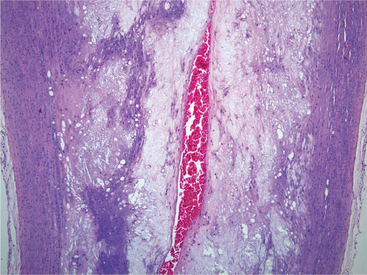 Fig 25-1 Photomicrograph of the aorta from aged Amazon parrot. Note the luminal compromise caused by marked thickening of the wall. (See Color Plate 25-1.)

Atherosclerosis is a condition of arteriosclerosis associated with additional intimal accumulations of foamy cells, extracellular lipid, cholesterol, and mineralization. In birds, cartilaginous or osseous metaplasia can be seen in these lesions, as well as osseous metaplasia. Macrophages and other leukocytes are variably present. Vascular changes often involve both the intima and the media, with disruption of the internal elastic lamina. The term atherosclerosis is derived from the Greek words for “gruel” (athero) and “hardening” (sclerosis). The reference to gruel refers to the soft core of lipid and variable necrosis in these lesions.

Atherosclerotic plaques are composed of collagen and proteoglycans. Smooth muscle cells produce the ECM of the plaques. After 6 weeks of a cholesterol-supplemented diet, Japanese quail with a propensity to develop atherosclerosis have elevated glycosaminoglycan levels and foam cell development in atheromatous plaques. These foam cells disrupt the collagen ECM. After 10 weeks on a cholesterol-supplemented diet, there is disorganization in aortic intimal collagen fibrils. Total vascular collagen does not necessarily increase.25

In humans, atherosclerotic changes progress in a described sequence, with generalized relationships to the patient’s age and clinical condition. Lesions begin as intimal fatty streaks, and early expansion is by lipid accumulation. These early lesions may begin in the patient’s teenage years. Smooth muscle and collagen proliferation accelerate about the fourth decade of life, resulting in formation of fibroatheromas, often with areas of central necrosis and mineral deposition. These changes may advance to the clinical phase of vascular disease, with progressive vascular stenosis, vascular thrombosis, and vascular degeneration with aneurysmal dilation or rupture, or both.

Atherosclerotic lesions in birds occur at the great vessels at the base of the heart and within the heart itself (Figure 25-2). The most frequently affected site is the aorta at the heart’s base. Other sites of importance include the brachiocephalic trunk, pulmonary artery, dorsal aorta, heart valves, and mural arteries. Aortic atherosclerosis in penguins may variably extend along the aorta to the level of the renal arteries. In all cases, lesions are more pronounced at the level of, or just before, the branching of smaller arteries. Unlike the condition in humans, associated aneurysmal dilation is not common in birds, except turkeys. 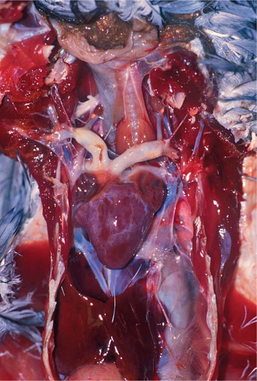 Fig 25-2 Diffuse and multifocal thickening of vessels at base of the heart in aged Amazon parrot. (See Color Plate 25-2.)

Turkeys are also the exception that makes the rule for lesion distribution of this condition. The muscular abdominal aorta of turkeys is much more susceptible to atherosclerosis than the elastic thoracic portion. In a study of 157 wild male turkeys collected by hunters in the early 1980s, birds demonstrated lesions most frequently in the sciatic arteries. Other affected sites, in order of decreasing frequency, were the aorta at the celiac region, cranial abdominal aorta, aorta at the sciatic bifurcation, caudal abdominal aorta, coronary arteries, and finally, thoracic aorta.17 This dramatically different lesion distribution suggests a possibly different etiology compared with other avian species. In quail, etiologic conditions respon-sible for atherosclerosis of the abdominal aorta are different than those resulting in lesions in the coronary arteries.

Relationships of atherosclerosis to age and gender in birds are not as clear-cut as in humans. Atherosclerosis is generally a condition of adults. In spontaneous avian atherosclerosis, although lesions have been reported in a bird less than 1 year of age, most affected birds are older adults, with severity increasing with age.2 Gender predilections have varied from report to report. Some studies demonstrate a male bias,11 some a female bias,10 and some no gender bias at all.2 In a review of 57 cases of atherosclerosis in seven species of penguins at all SeaWorld parks, there was no gender predilection. Lesions were limited to animals older than 4 years, and severity did increase with increasing age within species.

Chronic conditions of geriatric animals become increasingly common as avian health and nutrition improve. Atherosclerosis is a condition of interest because it is common in adult birds and may progress to fatal lesions. Additionally, similarities between avian and human atherosclerosis have promoted the use of various avian species as models for human pathogenesis and management.

Clinical signs of avian atherosclerosis are referable to vascular disease. As the vascular changes progress, there is restriction or blockage of blood flow as well as a decreased elasticity of the vascular wall. The condition exists most often in a subclinical form, with detection only with thorough examination at necropsy. As the lesions progress, however, the likelihood of associated clinical disease increases. Clinical conditions include vascular occlusion, rupture, and thrombosis. The significance of these changes depends on the organs affected and the severity of the lesion.

Vascular conditions associated with atherosclerosis include vascular rupture in penguins24 and a vulture.11 The condition in penguins was sometimes associated with prodromal signs of anorexia and decreased responsiveness to keepers on the morning preceding death. Sudden death occurred with no clinical signs in most cases. Cardiac disease identified on necropsy suggests that dyspnea and exercise intolerance may have been present as unidentified clinical conditions.

Atherosclerosis has also been associated with clinical signs in multiple organ systems because of reduced blood flow to critical organs. Most clinical signs are referable to poor blood supply to the brain or muscles or to secondary cardiopulmonary disease.2 Vascular luminal stenosis related to atherosclerosis in multiple vessels in a 16-year-old cockatoo resulted in clinical lethargy, decreased appetite, and falling off the perch. Clinical signs in multiple species include lethargy, disorientation, seizures, fainting, dyspnea, anorexia, regurgitation, and leg lameness to paralysis. Extensive atherosclerosis in the sciatic arteries of wild turkeys17 and at the origin of the celiac arteries in white Carneau pigeons7 suggests that examination of the abdominal aorta and its branches may identify causes for leg lameness previously undiagnosed in cases of significant atherosclerosis.

Although multiple avian orders exhibit atherosclerosis; some have demonstrated significantly more disease than others. Species of particular concern to the zoo veterinarian include African gray and Amazon parrots, hornbills, ratites, raptors, and polar penguins. Nonspecific conditions or cardiac disease in these birds should be associated with a high index of suspicion for atherosclerosis. In all avian species the condition should be considered for vague neurologic and cardiopulmonary disease, especially in older patients. An appropriate index of suspicion is the first step in proper diagnosis.

Diagnostic options include both direct and indirect modalities. Atherosclerosis by itself is generally subclinical. Unfortunately for many birds, sudden death is often the first clinical indication of this condition. However, as the index of suspicion for this condition increases, clinical investigations should prove of greater value. Research into related conditions (e.g., heart disease) may demonstrate atherosclerosis.

Routine radiography may identify cardiomegaly associated with atherosclerosis and severe vascular mineralization. However, the complex anatomy of the avian cranial thoracic region makes identification of all but the most severe lesions difficult in most species. Once changes such as vascular mineralization are evident, disease progression is advanced and opportunities for clinical intervention are limited.

Electrocardiograms (ECGs) are becoming increasingly common in avian diagnostics. Normal findings are available for a variety of avian species, including peregrine falcons, psittacines, and gulls.16,18,20,21 Normal ECG values have been published for groups of anesthetized and unanesthetized patients. Anesthesia may improve positioning of the patient and decrease muscular trembling. Conversely, some have reported anesthesia-associated arrhythmias.4,26 Because atherosclerotic changes often preferentially affect the aorta, causing luminal constriction and impeding flow, left ventricular enlargement with associated ECG changes is a possible clinical finding. ECG changes associated with left ventricular hypertrophy in humans include an increase in the QRS amplitude and prominent septal Q waves.5 Cardiac rhythm abnormalities are associated with atherosclerosis in humans.

Comparative studies in birds will become available as more clinicians use ECG diagnostics in these patients. In many reports the ECG electrodes have been attached to birds by alligator clips. In penguin species this has worked well on anesthetized patients because thick feather coats and animal movement have precluded good-quality examinations on awake patients. Using needle electrodes may prove valuable in penguins.

Ultrasound examinations are feasible in a variety of avian species. As in other cardiac evaluations, this diagnostic modality is becoming more useful as more published reports of normal findings become available. Examinations on small species are impeded by the increased impact of air sacs. Larger species, however, may demonstrate the usefulness of ultrasonography. Transesophageal examinations may be particularly effective at visualizing the heart despite the effect of prominent air sacs.

Another diagnostic modality of potential utility is computed tomography (CT) imaging. Although rapid heart rates of birds have previously impeded the use of CT, newer machines are capable of rapid imaging, minimizing the impact of fast heart rates. CT is used in human medicine for identifying mineralized atheromatous lesions and characterizing vascular stenosis. CT may represent an effective clinical alternative to diagnosing birds when thoracic ultrasound is not feasible or air sac interference impedes adequate examination of the great vessels.

Necropsy examination for detection of incidental and clinical atherosclerosis requires a systematic approach. Cardiovascular examinations should include opening cardiac chambers, examining the myocardium and heart valves, and extending incisions to major vessels to examine the intimal surface of vessels at the heart’s base. Examination of the aorta should extend from the heart base along the thoracic and abdominal aorta to the level of the celiac arteries. Multiple arteries may be affected, and histologic changes in myocardial, splenic, gastric, and meningeal vessels may be seen only if these organs are examined histologically. Arteriosclerotic and atherosclerotic changes may vary from minor, firm thickenings of the tunica intima to circumferential, hard thickenings of vessels with extensive luminal stenosis. Samples of the affected areas should be collected in 10% neutral buffered formalin and processed routinely for histologic review.