Vector-borne and Other Viral Encephalitides

Vector-borne and Other Viral Encephalitides

Overview of Vector-borne Encephalitides in Dogs and Cats

Affected Hosts: A variety of animal species including horses, humans, and dogs

Human Health Significance: Humans are susceptible to disease caused by many arboviruses. Dogs and cats are dead-end hosts and do not serve as reservoirs for human infection. Blood and tissues of affected dogs and cats should be handled with caution.

A large number of viruses that are spread by arthropod vectors (sometimes referred to as arboviruses, for arthropod-borne viruses) can infect and cause encephalitis in dogs and cats (Box 27-1 and Table 27-1). These viruses are all enveloped RNA viruses that are unstable in the environment and readily inactivated with routine disinfectants. Disease is sporadic and most infected dogs and cats show no clinical signs of illness. For many arboviruses, only subclinical infections have been documented in dogs and cats. Arboviruses are maintained in vectors and small rodent and/or avian reservoir hosts, and some of these reservoir hosts can develop illness in association with infection. Dogs and cats, as well as other domestic animal and human hosts, are generally considered “dead end” hosts and do not maintain sufficient viremia to infect arthropods (Figure 27-1). Arboviruses replicate within the arthropod vector and are transmitted to vertebrate hosts when the vector feeds; this is followed by viremia and, in some cases, viral spread to the central nervous system (CNS) and infection of neurons (neuroinvasion), with subsequent neuronal necrosis and inflammation. When disease occurs, it has important public health significance, because the clinical signs can mimic those of rabies. Because humans have the potential to be infected with these viruses, serologic evidence of infection of dogs and cats can also have public health significance.

Seasonal distribution that reflects activity of the vector host

May cause disease in humans and other domestic animals, especially horses

Infection of dogs and cats is most often subclinical

Infection more prevalent in dogs than in cats

Histopathology shows neuronal necrosis, gliosis, and perivascular cuffing within the brain, which is predominantly nonsuppurative.

Alphaviruses are mosquito-borne viruses that belong to the family Togaviridae. Members of this group that are of importance to human and animal health include Eastern, Western, and Venezuelan encephalitis viruses, which primarily cause disease in humans and horses in the Americas; and Ross River virus, which causes disease in humans in Australia and the Pacific islands. Although there is one possible report of encephalitis in a dog due to Venezuelan equine encephalitis virus,4 only eastern equine encephalitis virus (EEEV) is a significant cause of disease in dogs. Other alphaviruses cause subclinical seroconversion when they infect dogs; in some reports, seropositive cats have also been identified.5 Dogs have been used as sentinels for the presence of the virus in epidemiologic serosurveys.6

EEEV is endemic in swampy areas of the southeastern United States,7 where it is maintained in a variety of avian reservoir hosts. It causes disease in humans, horses, dogs, and other domestic animal species. Different viral lineages exist that vary in pathogenicity for humans and horses. Human cases occur in the southeastern, eastern, and Great Lakes regions of the United States, but especially Florida, Georgia, Massachusetts, and New Jersey (Figure 27-2, A).8 Most affected dogs are from Georgia, but one affected dog was from New York state.9 Dogs with signs of encephalitis have always been young (<7 months of age). Disease usually occurs in late spring or summer. Clinical signs include fever, lethargy, inappetence, and diarrhea, with rapid progression (within 1 to 2 days) to recumbency, tachypnea, miosis, nystagmus, tremors, seizures, and death.7 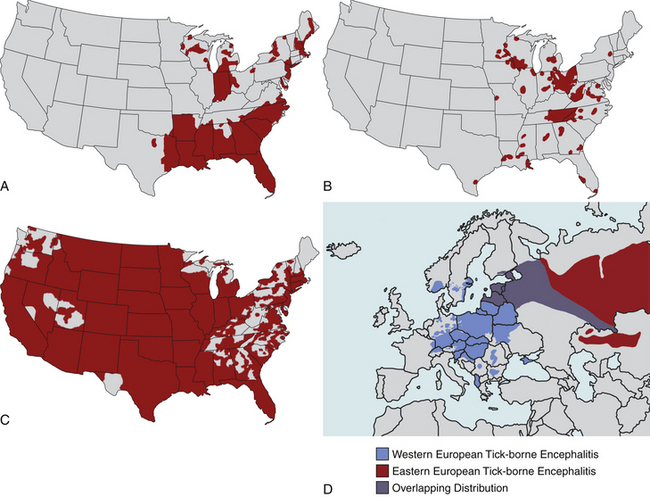 Important bunyaviruses for animal and human health are the mosquito-borne viruses Rift Valley fever (genus Phlebovirus) and La Crosse (genus Bunyavirus) viruses; the tick-borne virus Crimean-Congo hemorrhagic fever virus (genus Nairovirus); and members of the genus Hantavirus, which are not transmitted by vectors and cause hemorrhagic febrile and respiratory illness in humans. Serologic evidence of infection with some these viruses has been documented in dogs and cats.10,11 La Crosse virus is the only bunyavirus reported to cause disease in dogs under natural circumstances, but this appears to be rare.12,13 La Crosse virus was named after La Crosse in Wisconsin, where it was first identified as a human pathogen, and is found mostly in the eastern and midwestern United States (see Figure 27-2, B). The virus is maintained in rodents, especially Eastern gray squirrels and chipmunks. It is a major cause of human pediatric encephalitis in North America, although mortality is low. Affected dogs have included an adult dog from Florida and three puppies from southern Georgia.12,13 Mild fever, lethargy, ataxia, vestibular signs, and ultimately seizures occurred in the adult dog, and sudden death was reported in the puppies.

Vector-borne flaviviruses (flavi = “yellow,” Latin) of importance to human and animal health are the mosquito-borne viruses Japanese encephalitis virus, yellow fever virus, Murray Valley encephalitis virus, St. Louis encephalitis virus, Wesselsbron virus, Dengue viruses, and West Nile virus (WNV), as well as the tick-borne viruses tick-borne encephalitis (TBE) virus, louping ill virus, and Powassan virus. Antibodies to some of these viruses have been detected in dogs and to a lesser extent, cats in serosurveys,14-18 but serologic cross-reactivity among flaviviruses can occur. Although uncommon to rare, WNV in the United States and TBE virus in Europe have been reported to cause disease in dogs on more than one occasion. One dog from Africa with fatal encephalitis was initially thought to be infected with Wesselsbron disease virus,19 but the isolate was later confirmed to be WNV.20

West Nile virus was first isolated in 1937 from a woman in the West Nile region of Uganda.21 In the 1950s, the virus was recognized in Israel as a cause of human neurologic disease in the elderly,22 and subsequently was identified in other parts of Europe and South Africa. In 1999, it appeared in New York state, possibly by transport of infected humans, birds, or mosquitos.23 WNV then spread explosively westward across the United States, and by 2003, disease was detected across the United States to California (see Figure 27-2, C). WNV also spread into Canada, Mexico, the Caribbean, and Central and South America.23,24 Several different variants of the virus exist, which differ in virulence. Strains circulating within the Western hemisphere, Europe, the Middle East, India, Africa, and Australia belong to WNV lineage 1; lineage 2 strains circulate in South Africa and Madagascar. Other lineages have also been reported.

Transmission of WNV by mosquitos increases in the warmer months, with peak activity between July and October. Birds (especially passerines such as crows, jays, and brown sparrows; shorebirds; owls; and hawks) are important reservoir hosts (see Figure 27-1). Some avian species, such as brown sparrows, maintain high viremias in the absence of clinical signs. Other modes of transmission occur, such as ingestion through predation of infected birds or rodents, blood transfusion, needle-stick injuries, and transplacental transmission. Disease primarily occurs in birds, humans, and horses. When signs occur in humans they are often mild and self-limiting and include fever, headache, myalgia, fatigue, gastrointestinal symptoms, and a transient rash.25 Rarely, hepatitis, pancreatitis, myocarditis, rhabdomyolysis, orchitis, uveitis, and chorioretinitis can occur. Severe, neuroinvasive disease occurs in fewer than 1% of cases, is most common in the elderly and results in high fever, cervical rigidity, muscle weakness, seizures, and flaccid paralysis. Neurologic signs result from viral invasion of neurons in the brainstem, deep nuclei, and anterior horns within the spinal cord. Clinical signs in horses result from polioencephalomyelitis and include fever and neurologic signs such as ataxia, weakness, and muscle tremors.26 Approximately two thirds of horses recover. Infected wild birds can exhibit neurologic disease but are usually found dead. Myocarditis and meningoencephalitis are common necropsy findings in these birds.27

In dogs, there is widespread serologic evidence of infection, but disease is rare. Cats can become infected and seroconvert, but illness has not been described. Five clinically affected dogs have been described. All, apart from the dog from Africa, resided in various parts of the United States (Missouri, Mississippi, California, and Illinois).28-31 All of the dogs had signs of fever and progressive neurologic disease. Neurologic signs included generalized tremors, ataxia, a head tilt, bobbing movements, altered mentation, cervical pain, abnormal placing reactions, and tetraparesis. Diarrhea, serous oculonasal discharge, conjunctivitis, abdominal pain, cardiac arrhythmias due to myocarditis, tachypnea, tachycardia, and a stiff gait associated with mild neutrophilic polyarthritis have been reported. For all dogs, diagnosis was made at necropsy.

TBE virus is a notifiable disease that causes potentially fatal neurologic disease in humans in Europe and Asia, where it is the most important tick-borne viral disease of humans.32 The virus is transmitted transstadially and to a lesser extent transovarially within infected ticks, and ticks can transmit the disease to each other while co-feeding, independent of systemic viremia in vertebrate hosts.33 Consumption of raw milk from infected ruminants is a lesser mode of transmission to humans (Figure 27-3). 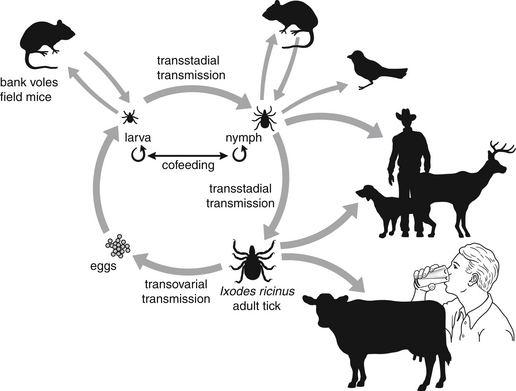 Three subtypes of TBE virus exist, which vary in virulence and geographic distribution. These are designated the European, Siberian, and far-eastern subtypes.34 The far-eastern subtype occurs in far eastern Russia, Japan, Korea, and China and is the most virulent subtype, with mortality rates in humans that may exceed 20%. In much of Europe, Ixodes ricinus ticks spread the European subtype (Western European TBE) whereas Ixodes persulcatus ticks transmit the other viral subtypes in northeastern Europe and Asia (Eastern European TBE) (Figure 27-2, D).35 Both Siberian and European subtypes may be found in eastern Europe. The disease was originally detected in 1937 in Austria, but its geographic distribution has expanded rapidly so that the European subtype now occurs throughout Europe as far west as France and possibly Belgium.17 In Europe, some of the highest incidence rates have occurred in central European countries, especially the Czech Republic.36 Disease seasonality correlates with the activity of the tick in various parts of Europe. TBE has not been reported in the United Kingdom, but a related tick-borne flavivirus that mainly causes disease in sheep, Louping ill virus, is present. This virus rarely causes encephalitis in dogs.37,38

In humans, signs of TBE occur in fewer than 0.5% of infected individuals 4 to 28 days after a tick bite and are biphasic. In the first, viremic phase, fever, malaise, headache, myalgia, and vomiting occur, which resolve within 1 week. In some individuals, after an asymptomatic period that lasts 2 to 10 days, clinical signs return and are accompanied by signs of meningitis, meningoencephalitis, meningoencephalomyelitis, or meningoencephaloradiculitis. About 1% of cases are fatal, most often in the elderly,39 but neurologic signs can persist for months or longer than a year. Co-infections with Borrelia burgdorferi can occur. Vaccines are currently recommended for prevention of TBE in humans, and national vaccination programs in Austria have greatly reduced the incidence of disease.40

Subclinical infection of dogs with TBE virus is widespread, and so dogs have been important sentinels for the presence of the virus in new regions of Europe. Rarely, illness that resembles that in humans can occur in dogs. Affected dogs have been described from Sweden, Switzerland, Austria, Germany, and Italy.32,41 Several reports have described disease in Rottweilers, but it is not clear whether this represents a true breed predisposition. Signs in dogs include high fever, lethargy, anorexia, and neurologic signs such as decreased mentation, behavioral changes such as aggression, delayed placing reactions, ataxia, flaccid paralysis, reduced segmental reflexes, neck pain, vestibular signs, tremors, tetraparesis, miosis, anisocoria, and generalized seizures.32,35 These signs progress rapidly over several days to a week, usually culminating in death or euthanasia. Recovery has been described rarely.