Use of Wildlife Rehabilitation Centers as Monitors of Ecosystem Health

Wildlife rehabilitation is defined as the temporary care of injured, diseased, and displaced indigenous animals and the subsequent release of healthy animals to appropriate habitat in the wild.37 However, this definition does not include the role of euthanasia as an appropriate disposition for many wild animals brought to wildlife rehabilitators. Few have doubted the important role of these activities in improving the welfare of many wild animals that are often injured as a result of human activities. However, it is unlikely that the rehabilitation of injured individuals of a common species has any significant effect at the population level.55 Therefore, legitimate questions have been raised regarding the justification for such activities and whether they could lead to the interference in natural selective processes, increase disease transmission among and between species, and result in the inappropriate translocation of animals. The limitations of wildlife rehabilitation as a conservation tool are discussed elsewhere.3,29

One of the guiding principles of veterinary medicine is “first, do no harm.” The welfare of wildlife populations is more important than the welfare of any individual animal, and nothing done in the interest of an individual animal should unnaturally jeopardize healthy wildlife.52 In this context, it is important to have a comprehensive preventive medicine program designed for the specific geographic location and circumstances to prevent harm to human health, individual animals, the wildlife populations, and the environment as a result of wildlife rehabilitation activities. This program should consist of admittance and release policies, animal identification and medical record systems, feeding and nutrition protocols, appropriate caging design and handling protocols to minimize trauma, standard sanitary operating procedures, wildlife health screening protocols, quarantine and isolation, and a staff occupational health program.

The protection of public health is paramount to all activities at a wildlife rehabilitation center. Therefore, it must be determined whether acceptance of any species represents an unacceptable risk to human health. For example, the recovery and admission for treatment of adult rabies-vector species, such as striped skunks (Mephitis mephitis) and raccoons (Procyon lotor), may present an unacceptable threat of exposure to rabies virus both to the general public who may encounter these animals and to the staff of the rehabilitation center.46 The risk of injury from venomous species as well as physically dangerous animals, such as adult white-tailed deer (Odocoileus virginianus), should also be assessed before allowing the admission of these species.

To prevent disease transmission within a wildlife center (which has been documented on several occasions18,22), strict hygiene and sanitation should be maintained that includes standard sanitary operating procedures10 as well as pest and rodent control. In addition, all animals that are admitted should undergo a comprehensive health screening examination that varies between species to reflect different disease risks. The tests performed and prophylactic treatments administered could be based, for example, on the World Organization for Animal Health (OIE, Office International des Epizooties) publication Quarantine and Health Screening Protocols for Wildlife prior to Translocation and Release into the Wild.56 Other examples of a preventive medicine program include the isolation of any sick animal with a communicable disease from healthy animals, as well as the quarantine of healthy animals suspected of carrying an infectious disease before disease screening. These animals should be housed in purpose-designed quarantine rooms that include separate airflow and drainage and separate caging and equipment from the rest of the building. An occupational health program for the staff could include annual rabies titers and vaccination if necessary, policies on access to rabies-vector species and dangerous animals, dissemination of information on wildlife zoonoses, and annual educational programs on health and safety, including classes on appropriate restraint and handling techniques.

Finally, the release policies should be designed to minimize the potential for disease introduction into the wild and for harm to the wild populations and the environment. The animal must not pose a risk to the wild population, humans, or the environment and should not be likely to spread pathogens or contribute to disease processes in other ways. The animal must not be carrying a potentially zoonotic infection and should not be imprinted, tame, or habituated to humans. In addition, animals must be released at, or near, the original site of capture unless conservation efforts or safety considerations dictate otherwise. The habitat must be within carrying capacity for the species to be released.

Prevention of interference in natural selection is probably more difficult to achieve. However, few (if any) wildlife populations in heavily altered ecosystems, such as exist in many parts of North America, escape anthropogenic effects on their health. In fact, recent reviews of the morbidity and mortality of wildlife presented to universities and wildlife centers have identified that human activities account for the majority of admissions.5,15,53 Even less obvious reasons for admission, such as aural abscesses in box turtles (Terrapene carolina) and Eustrongylides ignotus infection in herons and egrets, may be the result of human activities, such as contamination of the environment with organochlorine pesticides25 and eutrophication of wetland habitats,14 respectively. In contrast, wildlife from more pristine ecosystems may be under less anthropogenic influence, and consequently more consideration must be given to the potential deleterious effects of rehabilitation on the genetics of the population. Although no systematic studies have been conducted, some apparently pristine areas are also likely under human pressures, although somewhat different from those encountered in developed countries. For example, the illegal wildlife trade accounts for the majority of wildlife confiscations that are admitted to zoos and wildlife rehabilitation centers in Central and South America.40

Some species are afforded more legal protection, that is, threatened and endangered species, whereas others are classified as “nuisance” or “invasive” species. Also, most wildlife rehabilitation centers have limited resources. Thus, a triage policy should exist such that more time and resources are allocated to the animals from populations that would benefit most from these efforts, such as threatened and endangered species. It is also essential that wildlife rehabilitation centers comply with all state and federal laws, including those that may prohibit the release of certain nuisance species, for example, coyotes (Canis latrans) in Virginia.52 In addition, some introduced species, such as starlings (Sturnus vulgaris) and mute swans (Cygnus olor), are known to compete successfully with native species for nesting sites.41 Consequently, I believe that nonnative, invasive, and nuisance species should not be rehabilitated or released into the wild.

The importance of veterinary medicine and environmental education as part of a multidisciplinary approach to wildlife conservation and ecosystem health has previously been identified.1 Conservation medicine is a new discipline and has developed in response to the emergence of new diseases and threats to human and animal health from anthropogenic ecologic changes. Conservation medicine examines ecologic health issues, including emerging diseases; the biologic effects of pollutants; the health implications of ecologic alterations such as habitat fragmentation, simplification, and degradation; loss of biodiversity and ecosystem services; and global climate change. Conservation medicine is by definition transdisciplinary, involving professionals from diverse disciplines, such as human medicine, public health and epidemiology, veterinary medicine, ecology, conservation biology, wildlife management, and the social and political sciences, as well as educators and policy makers.

Wildlife rehabilitation centers are in a unique position to observe these ecologic changes and anthropogenic effects on wildlife health. Therefore, wildlife species presented for treatment are potentially excellent biomonitors for environmental problems. Many species, especially raptors, amphibians, and marine mammals, have provided information about environmental pollution and emerging diseases.13,17,23,42,47 Reptiles may also be good indicators of ecosystem health because of their reliance on the environment for appropriate physiologic functions, such as immunity, digestion, and thermoregulation.45 Data from wildlife rehabilitation centers have been underutilized for this purpose. However, the following studies demonstrate how data collected at a wildlife rehabilitation center may be used to monitor ecosystem integrity and the maintenance of biodiversity. These studies also illustrate the usefulness of wildlife as sentinels for human health threats.17

Aural Abscesses in Box Turtles as an Indication of Environmental Contamination

Aural abscess represented the second most common diagnostic category in free-living eastern box turtles (Terrapene carolina carolina) admitted to the Wildlife Center of Virginia (WCV, Waynesboro) from 1991 to 20005 and has been reported in other states.54 Aural abscesses are accumulations of caseous debris in the tympanic cavity resulting from squamous metaplasia of the epithelium that lines the middle ear.7,25 The lesion, which may be unilateral or bilateral, varies in size from subclinical accumulations of material to masses large enough to impede the animal from drawing its head back into the shell (Figure 12-1). Aural abscesses in free-living eastern box turtles resemble lesions occurring in captive box turtles that are vitamin A deficient.39 A similar relationship between hypovitaminosis A and squamous metaplasia has been described in other species, including ruminants and pigs.8,19 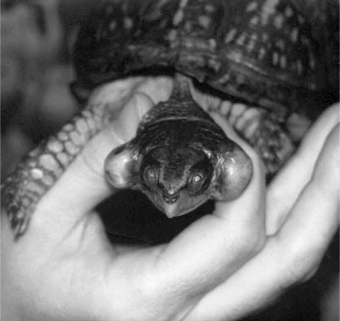