Geographic Distribution: Northern Hemisphere between 30 degrees and 71 degrees of latitude; most disease is reported from the United States, where virulent strains are most prevalent

Human Health Significance: Cats and less commonly dogs can transmit tularemia to humans after they are exposed to infected rodents or rabbits. Cat bites are most commonly implicated.

Tularemia (also known as rabbit fever, hare fever, deerfly fever, and lemming fever) is an extremely infectious but uncommon zoonotic disease caused by Francisella tularensis, a small (0.2 × 0.2 × 0.7 µm), nonmotile, aerobic, encapsulated gram-negative coccobacillus. The name “tularemia” comes from the first isolation of the organism from sick rodents in Tulare County, California, in 1911. There are four subspecies of F. tularensis: tularensis, holarctica, novicida, and mediasiatica. Subspecies tularensis (also known as type A) and holarctica (type B) cause most disease in humans. Subspecies mediasiatica is only found in Asia and the former Soviet Union. Subspecies novicida can cause illness in severely immunosuppressed humans and is widely studied as a model for tularemia because of its low virulence to laboratory workers.

F. tularensis subsp. tularensis has the greatest degree of virulence for humans and predominates in North America, whereas the less virulent subspecies holarctica predominates in Europe. Additional genetic variation within type A and type B subpopulations of F. tularensis correlates with geographic distribution of cases and the severity of disease.2 Molecular subtyping has further divided type A into subpopulations A1a, A1b, A2a, and A2b. The highest mortality in humans, 24%, results from infections by A1b.3

Tularemia occurs primarily in the Northern Hemisphere, especially between 30 degrees and 71 degrees of latitude (Figure 56-1). Human disease caused by a subspecies novicida–like organism was reported from the Northern Territory in Australia in 2003.4 Even in North America, where F. tularensis subsp. tularensis predominates, tularemia is a rare disease, and most human cases occur in the central and north-central United States, especially Arkansas, Missouri, Kansas, South Dakota, and Oklahoma, with an additional focus in Massachusetts (especially Martha’s Vineyard) (Figure 56-2). Despite its rarity, tularemia is a reportable disease in the United States because F. tularensis is considered a potential agent of bioterrorism. In western Europe, tularemia is endemic in Scandinavia but has emerged in new parts of Sweden and is increasingly reported in humans from more southern locations, such as Germany, France, and Spain.5 Tularemia has been absent from the United Kingdom, with the exception of travel-related disease. It also occurs in Russia and Japan.6 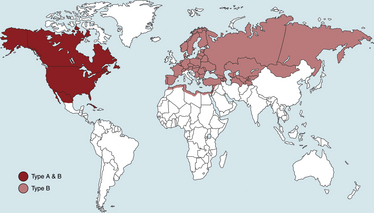 Canine and feline disease due to F. tularensis has only been reported from the United States. Young adult cats and dogs are usually affected. As with plague, cats are more susceptible than dogs. Cases are reported most often from Oklahoma7-9 and Kansas,10 but also from other locations that include Montana,11 Missouri,12 Massachusetts,13 central Virginia,14 and eastern Oregon,15 which mirrors the distribution in humans. Tularemia is likely underdiagnosed in cats and dogs because clinical signs are nonspecific. Many cats with tularemia are diagnosed with tularemia at necropsy.7,10 The seroprevalence in pet cats from Connecticut and New York state was 12%.16

F. tularensis is maintained in the environment by a huge variety of terrestrial and aquatic mammals, which include rabbits, hares, ground squirrels, prairie dogs, lemmings, voles, beavers, muskrats, water rats, and other rodents.6 It often causes severe disease in these species, although subclinical carriage may also occur. It can be transmitted by arthropod bites, inhalation or ingestion of the organism, and direct skin contact with infected tissues (probably when there are minute breaks in the skin) (Figure 56-3). Inhalation of as few as 10 organisms can cause human disease, whereas larger numbers of organisms (108) must be ingested for disease to occur. Cats and dogs become infected when they hunt rodents or lagomorphs; a history of rabbit ingestion was most often described in association with the few reported feline and canine cases.7–9 In the western United States (Utah, Nevada, and California), the most common arthropod vectors are biting flies, whereas ticks (especially Dermacentor ticks and Amblyomma americanum) are the most common vectors east of the Rocky Mountains. In Europe, Dermacentor ticks and Ixodes ricinus are the main tick vectors; mosquitos are important vectors in Scandinavia.17 F. tularensis is well known for its ability to survive up to several months in fresh water sources, and survival in brackish water has also been demonstrated.18 Survival and replication of F. tularensis within free-living amoebae such as Hartmannella vermiformis may contribute to the organism’s ability to persist in water sources.19 The organism can also survive for years in frozen rabbit meat. 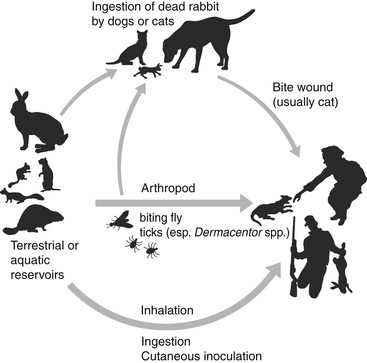 The clinical manifestations of tularemia depend on the virulence of the infecting strain, the route of inoculation, and host immunity. Although tularemia may rapidly progress to death in cats, protracted illness has also been described.15

F. tularensis survives in macrophages through evasion of cellular destruction by phagosomes and inhibition of the respiratory burst. Several different virulence factors of F. tularensis have been identified, which include bacterial lipopolysaccharide (LPS), pili, a capsule, and a series of acid phosphatase enzymes. The endotoxic activity of the LPS of F. tularensis is 1000-fold less potent than that of Escherichia coli.20,21 Production of acid phosphatase enzymes may be key to the organism’s ability to inhibit the respiratory burst and survive in macrophages.22 Many stages of the organism’s intracellular lifestyle depend on a pathogenicity island (group of virulence genes) known as the Francisella pathogenicity island.

For the first few days after cutaneous inoculation, F. tularensis replicates locally and can produce a papule that may then ulcerate. It then disseminates to local lymph nodes, which may be followed by bacteremia and sepsis, with infection of systemic, primarily reticuloendothelial tissues. The organism invades not only macrophages but also nonphagocytic cells such as hepatocytes and alveolar epithelial cells,23 with induction of a profound inflammatory response and necrosis. Incubation periods that range from 1 to 5 days have been suspected in naturally occurring tularemia in dogs and cats, but longer incubation periods (up to 21 days) can occur in humans. Clinical signs typically manifest as a sudden onset of fever, lethargy, and inappetence. Other manifestations in affected cats have included a thin body condition, icterus, hepatomegaly, vomiting, dehydration, peripheral and/or abdominal lymphadenomegaly, splenomegaly, and oral and/or lingual ulceration. Hypothermia and bradycardia can occur in moribund cats7; one cat had seizures and was nonresponsive.14 A single cat with localized cutaneous tularemia had a chronic (1-year duration) draining skin lesion in the region of (but not involving) the mandibular lymph nodes, in the absence of systemic signs.15 In the rare reports of naturally affected dogs, clinical signs have included fever, anorexia, and peripheral lymphadenopathy.8,24 One dog also had bilateral mucoid ocular discharge and mild conjunctival hyperemia,8 and another had tonsillitis.24

Physical examination in cats with tularemia may reveal lethargy, fever (up to 105.1°F [40.5°C]) or hypothermia, a thin body condition, and dehydration.7,9,11–13 Ulceration of the oral mucous membranes or tongue may be present.7,13 Icterus may also occur.25 Moribund cats may be hypothermic and bradycardic and may have weak pulse quality. Mild to marked peripheral lymphadenopathy is present in most but not all cats. Lymphadenopathy may be restricted to the lymph nodes of the head and neck13 or may be generalized.7,9 Abdominal palpation may reveal hepatomegaly or splenomegaly, or abdominal lymph nodes may be palpable. Fever, lethargy, peripheral lymphadenopathy, mucoid ocular discharge, and tonsillitis may be present in dogs.8,24

Tularemia should be considered in cats and dogs with lymphadenopathy and fever that have a history of residence in or recent travel to an endemic area, as well as contact with or predation of wild mammals (especially lagomorphs). Plague is the major differential diagnosis of zoonotic importance in the southwestern United States (Table 56-1). Ultimately, the diagnosis can be confirmed by culture, PCR, and/or serologic testing. With the exception of PCR, access to approved laboratories that practice biosafety level 3 procedures is required to perform these tests when tularemia is suspected. Local public health authorities should be contacted to report suspicion for the disease and for information on recommended testing facilities.

Leukocyte counts in a limited number of cats with tularemia have been normal, decreased (as low as 1300 cells/µL), or increased with evidence of neutrophil toxicity.7,9,13,14 Moderate to marked bandemia may be present.9,13 Thrombocytopenia is a common finding (as low as 41,000 platelets/µL).7,9 The serum biochemistry panel may show hypoglycemia, azotemia, and electrolyte abnormalities, increased liver enzyme activities, and hyperbilirubinemia (up to 7.6 mg/dL).7,9,14 Bilirubinuria and hemoglobinuria may be present.7 Mature neutrophilia, lymphopenia, and increased serum ALP activity were present in a dog with tularemia.8 In human patients, abnormalities include thrombocytopenia, elevated serum transaminase activities, increased serum creatine kinase activity, myoglobinuria, and pyuria.26