The Science and Theory Underlying Behavioral Medicine: Terminology, Diagnosis, Mechanism, and the Importance of Understanding Reactivity

Terminology, Diagnosis, Mechanism, and the Importance of Understanding Reactivity

There is still no consistent terminology in veterinary behavioral medicine. This lack of consistency has hurt collaborations, impeded progress in the literature, and confused veterinarians and clients who struggle to understand the dogs in their care.

There has been an unfortunate trend to lump aggressive diagnoses based on the victim (people [owner vs. stranger] directed vs. animal directed) (Bamberger and Houpt, 2006; Luescher and Reisner, 2008) as a way to achieve agreement on terminology, but when people using this strategy look further, the utility of phenotypic diagnoses is clear because they allow us to understand useful variation and to recognized clusters of behaviors that may be of greater and lesser risk. More contextually discrete diagnoses also make it easy for clients and clinicians to agree on which behaviors to avoid and which to alter in a manner that will help the dog.

Accurate diagnosis is particularly critical if the best care is to be provided to the patient. Veterinarians should also realize that particularly when destruction is involved the complaint is a true veterinary emergency. More pets are killed because of behavioral complaints than any other set of complaints (Miller et al., 1996; Spencer, 1993). The most common reason people abandon pets is due to behavior. Specific behavioral complaints accounted for 24 of 71 reasons for relinquishment (Salman et al., 2000). Dogs with behavior problems are relinquished after about 3 months; cats with behavior problems are relinquished after 1 to 2 years. Pets develop problems at social maturity—hence data that most dogs are kept for about 1.5 years before relinquishment (Salman et al., 2000). The breeds noted (Salman et al., 2000; Shore and Girrens, 2001) are also the breeds that are most frequently relinquished to shelters because of problems.

A case is made here for the approach suggested and expanded by Overall (1997, 2005a) and that is becoming more widespread. This diagnostic classification approach is based in classic ethology and relies on a context-dependent pattern of identification and enumeration of behaviors to create a phenotypic, phenomenological diagnosis. Phenotypically or phenomenologically diagnosed conditions are labeled on the basis of what the dog/cat does within specific contexts. As noted by Moyer (1968), phenotypic or phenomenological categories of diagnosis can be especially useful when aggression is a concern because (1) they allow us to identify specific behaviors or events that could provoke the aggression and permit avoidance of behaviors that would otherwise reinforce problematic and/or dangerous conditions, (2) they allow us to identify behaviors that can be modified in a contextually meaningful way, and (3) they presume nothing about the underlying neurophysiological and genetic basis of the behavior. This last point is important because it acknowledges that numerous underlying mechanisms, whether genetic or cellular, can produce a similar, and possibly indistinguishable, constellation of signs. For example, we cannot begin to examine clusters of behaviors that may form phenotypes that are expressions of specific suites of genes until we have sufficiently large populations of patients who have been evaluated using objective and validated techniques. Finally, the use of diagnostic criteria within a phenotypic/phenomenological diagnosis allows the clinician to interpret rare non-specific signs within a context in which the dog can be helped. For example, most dogs with separation anxiety do not mutilate their penis, but if you wish to stop the mutilation, understanding why the dog is so engaged may help guide your interventions (Ghaffari et al., 2007).

Archer (1988) criticized Moyer’s classification because it distinguishes categories of aggression in a manner inconsistent with their neural basis. However, as is true for genetic associations, neuroanatomical aspects of any behavioral condition are complex and polymorphic. Gene by environment (G × E) effects are notoriously difficult to evaluate for heterogeneous, multifactorial behaviors that are quantitative and polygenic.

For our purposes, a modification of a phenotypic/phenomenological terminology can provide enough information to work at a level where we can intervene—the actual behaviors—while also permitting epidemiological data to be collected to test putative underlying mechanisms. The definition of or criteria for a phenotypic diagnosis identify the pattern of contextual behaviors that commonly occur with the condition, allowing patients with the condition to be grouped together in a consistent way on the basis of ethology and context that distinguishes these patients from unaffected dogs/cats or from dogs/cats with another, possibly related condition. In other words, individuals more similar to each other than to those with other conditions are grouped together, which may permit recognition of underlying factors driving or contributing to the condition. There is no implication that all individuals with any diagnosis are equally affected, which is why it is so important to cluster patients on the basis of behavior and context.

It’s interesting to note that specialists are often very willing to agree on these patterns but not on what the diagnosis itself should be labeled. What we call something can be less important than the criteria used to label it, but what we call something can also be critically important if it affects the way we think. If by the way we call or name something affects how we think about it, we should be extremely cautious and use labels only when we can provide criteria to assess them. How we group and label diagnoses is a function of knowledge, which we should hope evolves. By basing diagnoses on clearly identified and defined contextual behaviors, we can avoid both the unfortunate recent trend toward overly broad, non-informative diagnostic labels (e.g., human-directed aggression) and labels that confuse or bias the issue and may say more about our anthropocentrism than they do about our understanding of the condition (e.g., sibling rivalry). Collaborative efforts could reflect these truisms and allow the field of veterinary behavioral medicine to grow while heading toward a shared terminology. The approach used here can lead to that outcome. This approach has been used successfully to identify risk factors for pathological behaviors in chimpanzees, identify the severity of the condition, and follow responses to therapeutic intervention (Ferdowsian et al., 2012).

It is essential to understand that any phenotypic diagnosis could have multiple underlying mechanisms driving it. In other words, not only are there a variety of diagnoses that may involve some aspects of anxiety (see Box 2-1 for a list of the non-specific signs of anxiety), but also within each diagnosis there is considerable phenotypic and mechanistic variation. These different mechanisms could be due to differences in regions of arousal in the brain that are aroused, differences in underlying neurochemistry, differences in molecular responses, and differences in genetic bases that facilitate the condition across the affected patient population (Fig. 2-1). For our purposes, this means that we should not expect all dogs who exhibit noise phobia, or all dogs who exhibit impulse control aggression, or all dogs who exhibit obsessive-compulsive disorder, or all cats who spray to be the same in terms of presentation, underlying brain regions involved, underlying neurochemistry, or underlying molecular basis (Overall, 2005a, 2005b). Certainly, these conditions need not be the same at the genetic level because one’s genetic code informs what could happen, not what will happen.

• Smacking or popping lips/jaws together

• Vocalization (excessive and/or out of context)

• Frequently repetitive sounds, including high-pitched whines,* similar to those associated with isolation (see Yin and McCowan, 2004)

• Lowering of head and neck

• Inability to meet a direct gaze

• Staring at some middle distance

• Body posture lower (in fear, the body is extremely lowered and tail tucked)

• Lifting paw in an intention movement+ 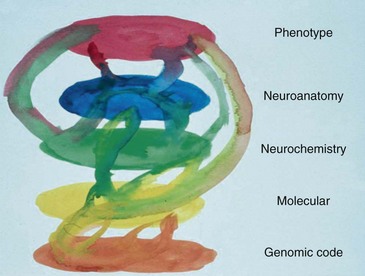 Fig. 2-1 Schematic illustrates the relative role that various mechanistic levels of diagnosis play in determining “response surfaces.” Note that phenotype can be affected directly or indirectly. The extent to which the different levels interact directly or indirectly could be a function of intensity, duration, or type of stimulus. There is no way to know these effects in the absence of specific data collection. Here, the genomic code provides the set of choices that could effect—but not necessarily will effect—molecular and neurochemical expression of behavioral phenotypes. In essence, the genomic response surface acts to define “boundary conditions”—it tells you what is possible, not what will happen. (From Overall, 2005.)

Accordingly, different individuals with the same diagnosis could have very different “response surfaces” where they exhibit different behaviors, behavioral intensities, or frequencies; have different thresholds for reacting; and may have different physiological responses and different therapeutic responses than other individuals who meet the criteria for the diagnosis they share (Box 2-2 and Table 2-1). Clear use of terminology can help make apparent the parts that are consistent and that we can understand and separate them from the parts that are more complex. If we were able to characterize all of the response surfaces of the affected patients, we’d have an excellent description of the patterns of behaviors and reactivity within an affected population (Fig. 2-2). Such population-wide characterization is difficult but would be extremely useful because it allows you to assess and assign relative risk.

1. Global patterns of behavioral change with age and neutering (must follow individuals through time)

B Suites of behavioral patterns

a. Numbers of behaviors that occur (range, mean, predictive value)

2. Elemental behaviors that are shared across diagnoses (may hint at underlying reductionist mechanism—i.e., the neurochemistry of stress)

A Region activated during normal versus abnormal behavior

2. Variants in patterns of activity

A Types of neurochemicals

2. Receptor types associated with these

a. Activity of receptor gates

b. “Metabolism” of receptors