The Neurologic Examination and Relevant Neuroanatomy

The Neurologic Examination and Relevant Neuroanatomy

A patient’s mental status reflects the integrity of the cerebrum, as well as parts of the brainstem (ascending reticular activating system [ARAS]). Anatomically, the diencephalon is the rostralmost aspect of the brainstem. Because diencephalic lesions cause clinical signs that are often indistinguishable from cerebral lesions, the term forebrain (cerebrum/diencephalon) is often used clinically to distinguish this part of the brain from the remainder of the brainstem. The major subdivisions of the brain are displayed graphically in Figure 38-1. In dogs and cats with altered mentation, it is sometimes necessary to describe both the quality and the content of mental status. The quality of mentation refers to the level of alertness; this ranges from a normal level of alertness to coma. Between these two extremes are obtundation and stupor (Table 38-1). Obtunded animals tend to appear depressed, listless, and disinterested in spontaneous activity. Although these patients often appear drowsy, they are easily aroused with a minor stimulus (vocal cues, other noises). Unlike other forms of depression (e.g., those due to metabolic disease), obtunded patients are often described as appearing “out of it.” Stupor describes a dog or cat that is not conscious but can be aroused with a strong stimulus (e.g., toe pinch). Coma refers to a state of unconsciousness that persists even after the application of a strong stimulus. Although not absolute, stupor and coma are often indicative of brain-stem lesions (i.e., midbrain through medulla), whereas obtunded mental status is often associated with forebrain disease (i.e., cerebrum/diencephalon). Some patients, particularly those with forebrain dysfunction, will display an alert (but abnormal) quality or level of mental status with abnormal content of consciousness (e.g., dementia associated with cognitive dysfunction). Behavioral abnormalities are separate from mental status changes, although a fine line may be present between these two assessments. Subtle behavioral changes may not be apparent to the examiner; in such situations, the owner’s assessment of their pet’s behavioral status is crucial. 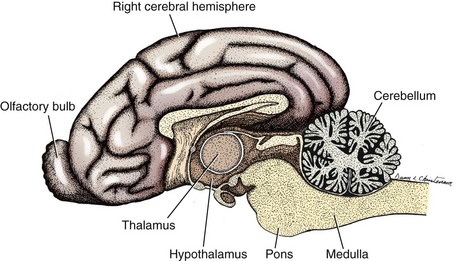 The twelve cranial nerves and their associated functions are summarized in Table 38-2. The locations of these nerves in relation to the brain subdivisions from which they originate are shown in Figure 38-2. Cranial nerve examination is straightforward and easily performed. It is customary and appropriate for the clinician to think of each cranial nerve in terms of its region or origin in the brain because dysfunction of a cranial nerve may represent damage to the neurons in a nucleus comprising that nerve (brain lesion) or to the nerve itself. It should be kept in mind that these nerves must travel a variable distance to their respective foramina, so there are clinical situations in which a specific cranial nerve is compromised at some distance from its associated brain subdivision (e.g., cavernous sinus syndrome). The cranial nerves and their respective brain origins are as follows: cranial nerves I and II—forebrain (cerebrum/diencephalon); cranial nerves III and IV—midbrain (mesencephalon); cranial nerve V (motor only)—pons (ventral metencephalon); and cranial nerves VI through XII—medulla (myelencephalon). The sensory nucleus and the tract of cranial nerve (CN) V is very extensive and is found from the midbrain rostrally to the first few cervical spinal cord segments caudally. Cranial nerves IX, X, and XI act in combination to perform the same basic functions (laryngeal, pharyngeal, and esophageal innervation), so they can be thought of collectively as one cranial nerve.

Cranial Nerves and Their Associated Functions 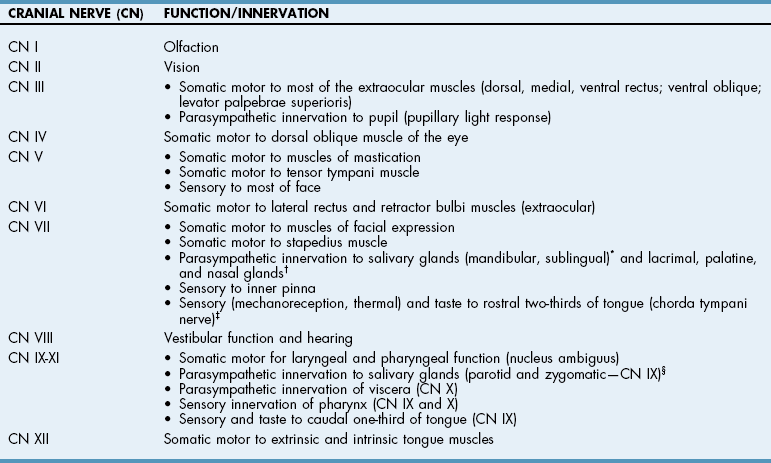 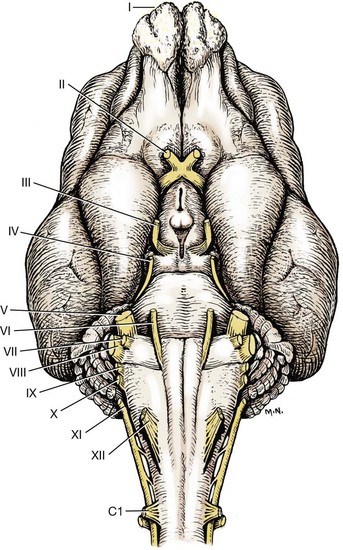 Cranial nerve I or the olfactory nerve is routinely ignored because it is difficult to assess the modality of smell. Cranial nerve II or the optic nerve conveys the sensory modality of vision. Visual ability can be assessed in a number of ways. Probably the most common test performed for evaluation of vision is the menace response. This is a learned response (should be present by 3 months of age in dogs and cats) and therefore is not a reflex. When a menacing gesture is made toward the patient with the examiner’s hand, the appropriate response is for the patient to blink (Fig. 38-3). The afferent part of this response is conducted by CN II, and the efferent part (the blink) is accomplished via the facial nerve (CN VII). Visual following is somewhat objective, especially with cats. In this test, objects (such as cottonballs or toys) are thrown or dropped in front of the patient; the normal expectation, if vision is intact, is for the patient’s eyes and head to follow the objects. Cranial nerve III or the oculomotor nerve has two major components: somatic motor and parasympathetic. The somatic motor portion of CN III innervates most of the extraocular musculature—dorsal rectus, medial rectus, ventral rectus, ventral oblique, and levator palpebrae superioris muscles. The parasympathetic component of CN III is responsible for pupillary constriction. The visual and pupillary constriction pathways are illustrated in Figure 38-4. Damage to the oculomotor nucleus or CN III may lead to ventrolateral strabismus and/or a dilated pupil that is variably (depending on extent of the damage) responsive to light. Evaluation of the parasympathetic aspect of CN III function/dysfunction is done by shining a bright light into the eye and observing for pupillary constriction. Both pupils should constrict when a light is shone into one eye, with the eye being stimulated (direct) having stronger constriction than the opposite (indirect) eye. In this reflex, called the pupillary light reflex (PLR), the afferent information is carried via CN II, and the efferent response is mediated via CN III. It is important to use a strong light source when attempting to elicit a PLR in a patient. Dogs and cats in a hospital surrounding often have high sympathetic tone, and using a weak light source on these patients may not be sufficient to effect pupillary constriction. The trochlear nucleus and its associated nerve, the trochlear nerve (CN IV), are responsible for innervation of the dorsal oblique muscle of the eye. This muscle prevents the outward (lateral) rotation of the dorsal aspect of the globe. Isolated deficits of this nucleus and nerve are rarely encountered in small animals; this cranial nerve is typically ignored in the cranial nerve examination of dogs and cats. 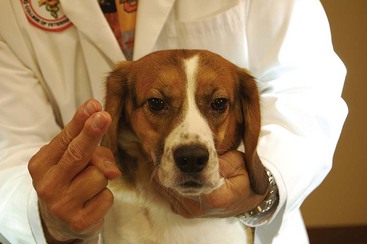 FIG 38-3 The menace response is elicited by making a threatening gesture at the eye, which should induce a blink. 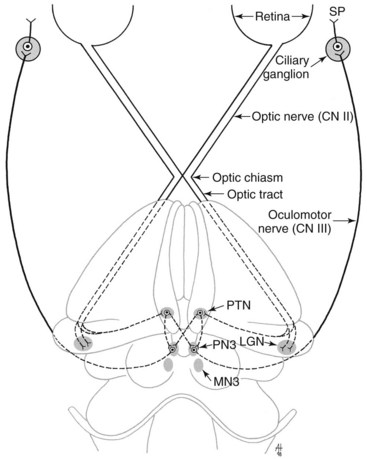 The motor nucleus of CN V in the pons and its associated efferent axons in CN V, the trigeminal nerve, are responsible for motor innervation of the muscles of mastication. Clinical evaluation of this cranial nerve is based primarily on visual and/or palpable evidence of masticatory muscle atrophy (Fig. 38-5). With bilateral dysfunction, the patient may not be able to close the mouth effectively. As mentioned, the sensory nucleus and tract of CN V is quite extensive. This is evaluated by checking for sensation around the face (Fig. 38-6). In addition, performing the corneal reflex evaluates the integrity of cranial nerves V (sensory), VI, and VII (Fig. 38-7). The surface of the cornea is innervated by the ophthalmic branch of CN V. When the cornea is lightly touched with a moistened cotton applicator, the normal reflex is a blink (CN VII) and retraction of the globe (CN VI). Cranial nerve VI, the abducent nerve, is derived from the abducent nucleus in the rostral medulla and provides somatic motor innervation to the retractor bulbi and lateral rectus muscles. Damage to this cranial nerve will impair the ability of the eyeball to retract (as in the corneal reflex) as well as to move laterally (when checking for physiologic nystagmus). Cranial nerve VII, the facial nerve, innervates the muscles of facial expression and is derived from the facial nucleus in the medulla. This nerve is evaluated clinically by assessing for facial symmetry and performing the blink reflex, corneal reflex, and trigeminofacial reflex (Fig. 38-8). This latter reflex involves stimulating the maxillary region (CN V) and observing for a blink (CN VII). The facial nerve also supplies sensory innervation to the inner pinna, so this region can be lightly stimulated (e.g., hemostat tips) and the patient observed for a behavioral response. 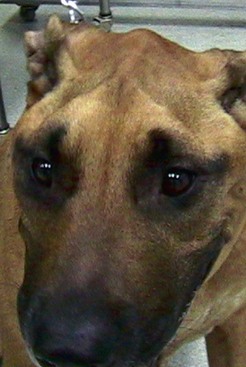 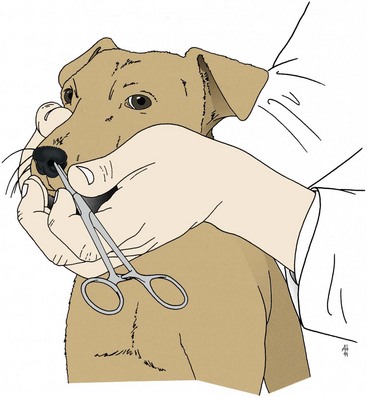 FIG 38-6 The sensory portion of the trigeminal nerve (cranial nerve [CN] V) is tested by stimulating the nasal mucosa with a blunt instrument. Normal patients will pull their head away. (Modified from Dewey CW: A practical guide to canine and feline neurology, ed 2, Hoboken, N.J., 2008, Wiley-Blackwell.) 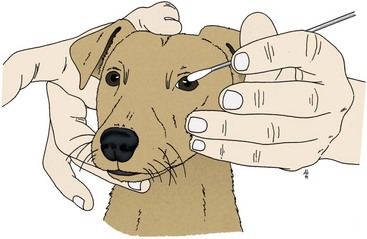 FIG 38-7 The corneal reflex is tested by touching the cornea with a cotton-tipped applicator moistened with saline. The normal response is retraction of the globe. (Modified from Dewey CW: A practical guide to canine and feline neurology, ed 2, Hoboken, N.J., 2008, Wiley-Blackwell.) 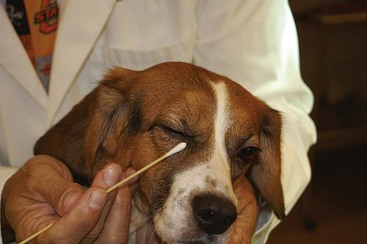 FIG 38-8 The palpebral or blink reflex is elicited by touching the skin medial or lateral to the eye. Normally, this will induce a blink.

Cranial nerve VIII is the vestibulocochlear nerve, which carries the sensory modalities of hearing and balance. It is difficult to accurately test hearing during a neurologic examination; animals with normal hearing and normal mentation will turn to acknowledge loud or sudden noises. If clinically indicated, hearing is evaluated using an electrodiagnostic procedure called a brain-stem auditory evoked response (BAER) test (see p. 1416). The integrity of the vestibular system can be evaluated in several ways. A patient with normal vestibular function should not display a head tilt, ataxia, strabismus, or spontaneous (resting) nystagmus. Turning a patient’s head to the side should induce a normal physiologic nystagmus directed horizontally with a fast phase in the direction of the head rotation. Dogs and cats are moved in various positions in an effort to elicit abnormal (positional) strabismus and nystagmus, both of which would indicate an abnormality with the vestibular system. Abnormalities of the vestibular system may be due to damage to the peripheral portion (inner ear) or the central portion (medulla and/or cerebellum) of this system (Fig. 38-9). 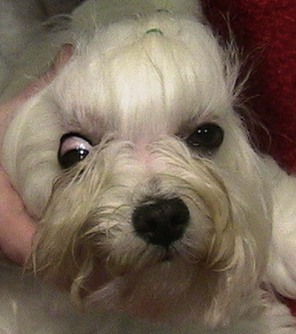 Cranial nerves IX (glossopharyngeal nerve), X (vagus nerve), and XI (accessory nerve) are considered together because they act as a group to innervate striated muscles of the larynx, pharynx, and esophagus. The cell bodies of these cranial nerves are located in the nucleus ambiguus found in the ventrolateral medulla (Fig. 38-10). Laryngeal function cannot be evaluated in the awake patient, but dysfunction can be inferred from inspiratory stridor in dogs with bilateral laryngeal dysfunction. The ability to swallow normally can be deduced by performing the swallow or gag reflex. This test can be performed in one of two ways. The first involves direct stimulation of the pharyngeal mucosa with a cotton applicator or a gloved finger (Fig. 38-11). The disadvantage of this method is that it is applicable only to very cooperative patients. The advantage is that the strength of the gag reflex can be directly felt (if a gloved finger is used). The other, safer (for the examiner) method, is to palpate the pharyngeal musculature externally, craniodorsal to the larynx (Fig. 38-12), and observe for a swallow from the patient. Cranial nerve XII, the hypoglossal nerve, innervates the tongue musculature. This nerve originates from neuronal cell bodies in the hypoglossal nucleus located in the caudal medulla (Fig. 38-13). Tongue function can be evaluated by watching the patient drink water or lick his or her nose (dogs and cats often do this after the swallow/gag reflex, cats often lick their nose and swallow if the nose is rubbed by the examiner). In cooperative patients, the tongue can be grasped and directly observed for any atrophy (Fig. 38-14). 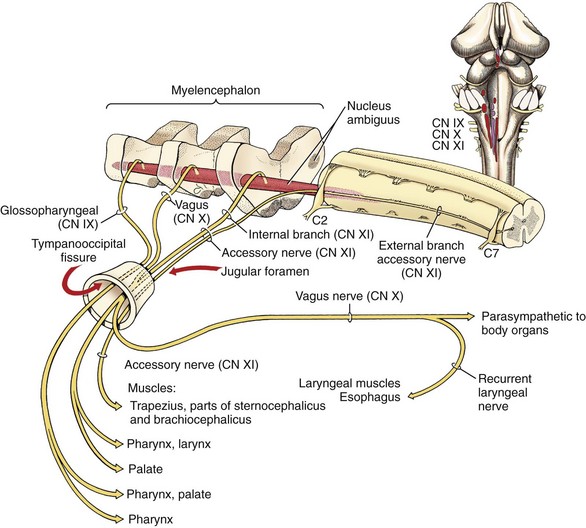 FIG 38-10 Schematic illustration of the nucleus ambiguus and its innervations of the striated muscle of the larynx, pharynx, and esophagus. (From DeLahunta A: Veterinary neuroanatomy and clinical neurology, ed 3, St. Louis, 2009, Saunders.)