Overview of Staphylococcal Infections in Dogs and Cats

Mode of Transmission: Direct contact (or through fomites). Organisms are often commensals that invade opportunistically.

Human Health Significance: Humans can become colonized with staphylococcal isolates that colonize or infect dogs and cats. Methicillin-resistant S. aureus, which can persistently colonize humans, is of greatest concern, although colonization of dogs with MRSA appears to be transient. S. pseudintermedius, which persistently colonizes dogs, has occasionally been isolated from sick and healthy people who are in contact with dogs, and is of concern because of its tendency to show a high degree of multidrug resistance.

Staphylococcus spp. are gram positive, nonmotile, non–spore forming, and usually catalase-positive cocci, which occur singly and in pairs or grapelike clusters (Figure 35-1). Most species are facultative anaerobes. Staphylococci colonize the skin and mucous membranes of an enormous variety of animal species, and disease generally follows a breakdown in normal host defenses. Staphylococci can also contaminate surfaces in the environment, where they may survive for several months. 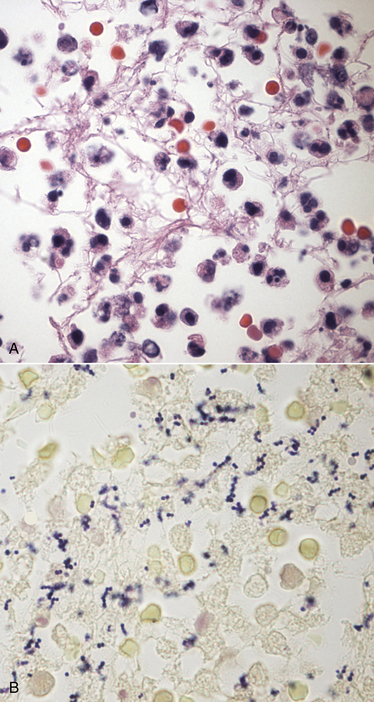 FIGURE 35-1 Histopathology of the integument from the left inguinal region and flank of an 8-year old male neutered boxer dog that had severe, regionally extensive acute neutrophilic cellulitis and panniculitis accompanied by septic shock. A methicillin susceptible Staphylococcus pseudintermedius was cultured from an aspirate of cellulitis fluid. The dog had also been treated with prednisone and azathioprine for 4 years to maintain remission for immune-mediated hemolytic anemia and thrombocytopenia. A, H&E stain. Large numbers of degenerate neutrophils are present. B, Staining with Brown and Benn stain reveals numerous of gram-positive coccoid bacteria, individually, in pairs, and in clusters.1000× oil magnification.

In recent years, the prevalence of antimicrobial drug resistance has increased in Staphylococcus isolates obtained from canine and feline infections. A significant proportion of resistant isolates possess the mecA gene, which encodes an altered penicillin binding protein (PBP), known as PBP2a. The mecA gene is located on a large genetic element, the staphylococcal cassette chromosome. This PBP has low affinity for all β-lactam drugs (penicillins, cephalosporins, and carbapenems). As a result, staphylococci that possess this gene are also resistant to the penicillinase-resistant penicillins (oxacillin and methicillin), and so are termed methicillin-resistant Staphylococcus (MRS) species. Many MRS also possess resistance genes to other antimicrobial drug classes. There is no evidence that MRS are more virulent than methicillin-susceptible staphylococci, but infections with MRS are more difficult to treat with antimicrobial drugs. The prevalence of MRS isolated from dogs has ranged from 0.6% to as high as 67%, depending on the population sampled (healthy versus disease, hospitalized versus outpatients), geographic location, study dates, and sites of specimen collection. Of 89 staphylococcal isolates from dogs with superficial pyoderma seen in 2010 and 2011 by the University of California, Davis, Veterinary Dermatology service, 38.2% were MRS. This compared with 27.3% of 33 isolates from a primary care clinic in the same region.5 Methicillin-resistant S. pseudintermedius (MRSP) isolates are generally resistant to more antimicrobial drug classes than methicillin-resistant S. aureus (MRSA) isolates from dogs and cats. Severe multidrug resistance is also prevalent among CoNS.

S. pseudintermedius is the most common Staphylococcus species isolated from dogs. It is a commensal of the skin and mucous membranes of dogs and cats and possibly one of the most common bacterial pathogens treated by veterinarians. It primarily colonizes the anal mucosa and nares of healthy dogs and cats, but it can also be isolated from the mouth, forehead, and inguinal region. It can colonize the skin transiently following grooming and licking in dogs with pruritis. Cats have a much lower prevalence of colonization with S. pseudintermedius than dogs. S. pseudintermedius invades tissues opportunistically and is a major cause of superficial and deep pyoderma, otitis externa, urinary tract infections (UTIs), and wound and surgical site infections, as well as bronchopneumonia, ocular infections, bacteremia, osteomyelitis, and infections of body cavities. An underlying immunosuppressive condition or break in host barriers is present in the majority of infections.

The whole genome of S. pseudintermedius has been sequenced, which is a major contribution to our understanding of the pathogenesis of infections caused by this organism.8 Like S. aureus, S. pseudintermedius possesses numerous mobile genetic elements and potential virulence factors, such as toxin genes that encode for a superantigen, leukotoxin, hemolysins, and exfoliative toxins, as well as an array of proteases.

Methicillin resistance has emerged as a serious and widespread problem in S. pseudintermedius isolates from both healthy and sick dogs and cats. Molecular analysis has shown that among dogs, two distinct, major clones of MRSP have spread across Europe and North America, respectively.9 Many isolates of S. pseudintermedius not only are methicillin resistant, but also acquire resistance genes to other classes of antimicrobials, including tetracyclines, trimethoprim-sulfonamides, fluoroquinolones, chloramphenicol, and macrolides. Isolates that are resistant to three or more different classes of antimicrobial drugs are defined as multiple drug resistant (MDR) isolates. Currently, many isolates remain susceptible to chloramphenicol and aminoglycosides, but the prevalence of resistance to chloramphenicol has increased among MRSP isolates. MDR S. pseudintermedius isolates are no more virulent or difficult to disinfect than susceptible isolates, but they are more difficult to eliminate using antimicrobial drugs. Risk factors for MRSP infection identified in dogs include previous hospitalization, living in an urban environment, older age, and, most consistently, previous antimicrobial drug treatment. Household contacts of dogs and cats with MRSP infection are also frequently colonized with MRSP.10

S. aureus colonizes the skin and mucous membranes of humans and is one of the most common community-acquired and hospital-acquired bacterial pathogens of people. The anterior nares and the throat are preferred niches for the organism, which can be isolated from the anterior nares of up to 30% of the healthy human population. Methicillin resistance is a growing problem among isolates from humans and animals. Both hospital-acquired methicillin-resistant (HA-MRSA) and community-acquired methicillin-resistant (CA-MRSA) strains have been identified in infected human patients, and invasive S. aureus infections are associated with high mortality rates.

When compared with S. pseudintermedius, S. aureus tends not to colonize dogs. For example, staphylococci were isolated from 37 of 50 healthy dogs from Pennsylvania, and 6 (12%) of the dogs were colonized with S. aureus; 68% were colonized with S. pseudintermedius.11 MRSA strains that colonize dogs may be identical to those that infect in-contact humans, but sometimes strains found on dogs differ from those found on in-contact humans.12 The chance that a dog that is in contact with an infected human will be colonized with MRSA decreases with the time after diagnosis of human MRSA infection, which suggests transient carriage of MRSA by dogs. MRSA was not transferred between apparently healthy dogs in a kennel of dogs, and after treatment of an MRSA wound infection in one dog, all dogs tested negative for MRSA within 2 weeks.13 Although staphylococci are isolated less commonly from cats, colonization with S. aureus is more prevalent and certain S. aureus strains may be commensals of cats; staphylococci were isolated from 17 of 50 healthy cats, 59% of which were colonized with S. aureus and 65% with S. pseudintermedius.14

In dogs and cats, S. aureus infection has been associated with clinical manifestations that include pyoderma, otitis externa, UTIs, surgical site infections, osteomyelitis, and bacteremia. Although MRSA infections are uncommonly diagnosed in dogs and cats, they have been increasingly recognized over the past 2 decades. When canine infections with MRSA do occur, they are often of human hospital origin, but human community-acquired strains have also been isolated. In one study, strong risk factors for MRSA infection (as opposed to methicillin-susceptible S. aureus [MSSA] infection) were the number of antimicrobial courses administered, the number of days admitted to veterinary clinics, and a history of surgical implant placement.15 There has been concern that the use of certain antibiotics, such as cephalosporins and fluoroquinolones, may select for MRSA infections in dogs.

Signs and Their Pathophysiology

S. aureus and S. pseudintermedius possess several adhesins and produce an array of toxins. The clinical effect of these toxins is best characterized for S. aureus infections in humans. A number of enterotoxins have been identified in S. aureus and S. pseudintermedius; these can cause food poisoning in humans but have not been recognized as a cause of disease in dogs and cats. Staphylococcal enterotoxins are heat stable, so they are not inactivated by cooking, even when the bacteria themselves are destroyed. Staphylococcal toxic shock syndrome results from the expression of superantigens, which include toxic shock syndrome toxin 1, as well as a large number of enterotoxins and exotoxins that can also act as superantigens. Cellulitis, necrotizing fasciitis, and toxic shock syndrome has been rarely reported in dogs infected with S. pseudintermedius.16,17 Most toxic shock syndrome and necrotizing fasciitis cases in dogs and cats are instead caused by Streptococcus canis (see Chapter 34). Scalded skin syndrome results from infection of humans with S. aureus strains that produce an exfoliative toxin, which hydrolyses the intercellular glycoprotein desmoglein-1. Strains of S. pseudintermedius that possess exfoliative toxin genes have been isolated more commonly from dogs with pyoderma than from healthy dogs, so exfoliative toxin may also play a role in canine disease. Panton-Valentine toxin (PVL) is a leukocidin that is found in CA-MRSA strains but only a small percentage of HA-MRSA and MSSA strains, and strains that encode PVL have been associated with skin and soft tissue infections and hemorrhagic pneumonia in children and young adults. Although a similar toxin has been identified in S. pseudintermedius, the role of PVL in the pathogenesis of staphylococcal infections in dogs and cats is unknown.

Some strains of S. pseudintermedius and S. aureus produce biofilm, which may contribute to the ability of these organisms to persist in the environment, cause nosocomial infections, and chronic recurrent infections that respond poorly to antimicrobial treatment.18

Dogs with staphylococcal infections of the skin and ear canal often have no clinically significant hematologic or biochemical findings. Systemic infections may be associated with neutrophilia and a left shift, toxic neutrophils, lymphopenia, and monocytosis. The urinalysis of dogs and cats with staphylococcal UTIs may reveal pyuria, proteinuria, or hematuria, and sometimes cocci in clusters may be evident on sediment examination.