Continence in bitches, which have no true bladder neck sphincter,11,92 is maintained by a complex mechanism of interacting factors. The term urethral sphincter mechanism incompetence was suggested in 1983 to describe a weakness of the urinary sphincter47 and has been widely adopted since then. Although great progress has been made over the past 3 decades in our understanding of the pathophysiology and thus the treatment of canine urethral sphincter mechanism incompetence, a recent editorial by one of the world’s most respected urologists18 suggests we still have a great deal to learn. Despite more than 200 procedures being described for the treatment of human stress incontinence, the author was left asking, when it comes to his own patients, what should he do? What follows in this chapter, therefore, is a summary of our current understanding of the condition and its treatment, but we have much left to learn.

The neuromuscular function of the lower urinary tract in dogs (see Figure 116-3) is complex and not completely understood. In a variety of species, including dogs,27 direct sympathetic–parasympathetic interaction occurs in the urethra and bladder.29,37 To complicate matters further, there is evidence for autonomic (particularly sympathetic) and somatic innervation of urethral striated muscle in some animals and humans25–27,71 but not in dogs.70,97 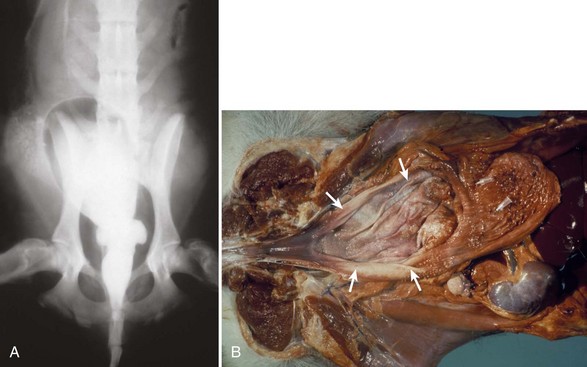 Based on investigations of urethral pressure profilometry in bitches, poor urethral tone is implicated in urinary incontinence secondary to urethral sphincter mechanism incompetence.42 Urethral tone is maintained by a complex interaction of neuromuscular, vascular, and passive elastic components; it is unclear which of these is deficient in patients with urethral sphincter mechanism incompetence.

A number of authors recorded the radiographic finding of a “pelvic bladder” during the investigation of incontinent animals. The significance of this finding was disputed in the past; however, there is good evidence that an intrapelvic bladder neck contributes significantly to incontinence from urethral sphincter mechanism incompetence.39 Caudal bladder position in affected dogs is associated with a shorter urethral length. Additionally, shifting of the bladder caudally when a bitch moves from a standing to a relaxed recumbent position is more pronounced in bitches with urethral sphincter mechanism incompetence than in normal animals, suggesting a deficiency in supporting mechanisms in the lower urinary tract of affected animals.8 The role of bladder neck position in bitches with USMI is thought to be from changes in transference of abdominal pressures to the urethra (Figure 118-2).31,39,52

Body size appears to be a factor because large and giant breeds are particularly at risk. In the United Kingdom, urethral sphincter mechanism incompetence is most common in Dobermans and Old English sheep dogs, and there is evidence that these breeds and Rottweilers, Weimaraners, Springer spaniels, and Irish setters are particularly at risk.54 Although not a cause of urethral sphincter mechanism incompetence,30 obesity may worsen the degree of incontinence, and weight loss may improve the situation.

In dogs, incidence of postspay incontinence, which is usually a result of urethral sphincter mechanism incompetence, varies from 5% to 20%.4,5 In general terms, spayed animals are nearly eight times as likely to develop urinary incontinence than intact bitches.93 This should, however, be considered in terms of the dog’s age: if 100 bitches were not spayed, 10 years later, two of them would be incontinent. If 100 bitches were spayed, about 16 of them would be incontinent after 10 years. An increased risk with spaying before the first estrus could not be proved conclusively in a prospective study,93 probably because of the low number of animals examined. Some authors recommend that early gonadectomy of female dogs, if practiced, should be delayed until the animal is at least 3 months of age.91

Connective tissue, including elastic fibers, forms approximately three quarters of the total volume of the female canine urethra.10 Neutering affects the balance between collagen and muscle volumes in the canine lower urinary tract.21,75 In general, gonadectomized dogs have a significantly higher proportion of collagen and lower proportion of muscle than intact dogs. Regardless of gonadal status, females have higher collagen-to-muscle ratios than males.75 However, ovariectomy has no effect on collagens I, III, and IV or smooth muscle α-actin.14

Although the canine urethral vascular plexus may contribute to urinary continence,11,13 paradoxically, its volume appears to increase in spayed bitches.10

Neutering also affects vaginal and vestibular dimensions, which are generally lower in spayed bitches.33,95 However, differences in vaginal dimensions of intact and spayed bitches appear to have little effect on bladder neck position in relation to urinary incontinence.34

Function and morphometry of the lower urinary tract are affected by the changes in hormone balance that occur during the estrus cycle.36 An association between spaying and urinary incontinence93 is probably a result of reduction in urethral smooth muscle tone from decreased circulating estrogen concentration.68 Although the effect of estrogen deficiency may be to reduce urethral smooth muscle tone,88 striated canine urethralis muscle may also be affected by neutering, with a reduction in numbers of types I and II muscle fibers.9

Some evidence suggests that an excess of gonadotrophins after neutering may also be a factor in the development of urinary incontinence. Neutering increases circulating luteinizing hormone and follicle-stimulating hormone concentrations in male and female dogs because of lack of negative feedback on the pituitary, although there is less of an increase in luteinizing hormone in male dogs.72,84 Luteinizing hormone and follicle-stimulating hormone receptors and their messenger RNA (mRNA) expressions have been detected in the canine lower urinary tract and vary among the levels of the tract, different tissue types, males and females, and entire and neutered animals.74,77,85

The effect of pituitary gonadotrophins in the lower urinary tract may be via their regulation of expression of cyclooxygenases (COX) in the synthesis of prostaglandins, although their main activity in micturition is as a local modulator in dogs28,56–59,67 and humans.2 The production of prostaglandins is mediated by COX via conversion of arachidonic acid into prostaglandin endoperoxide, a precursor for synthesis of all prostanoids. Expression of COX, specifically COX-2 and its mRNA, has been demonstrated in the lower urinary tract of dogs.76 This expression varies with sex, gonadal status, and tissue layers. In general, gonadectomized male and female dogs have lower expression of COX-2 and its mRNA. This may lead to lower prostaglandin production in neutered dogs; a definitive link to development of urinary incontinence, however, has not been identified. Interestingly, COX-2 inhibitors have been shown to inhibit the micturition reflex in experimental rats, especially those with bladder overactivity,3 and COX-2 inhibitors and nonselective nonsteroidal antiinflammatory drugs (NSAIDs) can increase the risk of acute urinary retention in humans.35,94

Urethral sphincter mechanism incompetence is the canine equivalent of human stress incontinence. The human condition is more common after childbirth, which may lead to pelvic floor dysfunction. This does not appear to be the case in bitches, with no evidence of pathologic changes in the levator ani muscle in multiparous compared with nulliparous dogs.12

Urethral sphincter mechanism incompetence in male dogs is uncommon.1 As in bitches, the condition can be congenital or acquired. The congenital condition is often associated with gross prostatic or pelvic urethral deformities (urethral dilatations and prostatic urethral diverticulae; see Figure 118-1) and is unlikely to be successfully treated. As in bitches, the acquired form is associated with neutering,78 and larger breeds appear to be at risk. Incontinence is likely to occur when intra-abdominal pressure increases (e.g., during recumbency). Affected animals tend to have intrapelvic bladder necks, although a short urethra does not appear to be a factor in males.78

Congenital and acquired urethral sphincter mechanism incompetence tend to affect large breeds of dog, predominantly bitches. Leakage of urine is more copious than in animals with ureteral ectopia and occurs predominantly when dogs are recumbent. In many bitches, no gross abnormalities are detected on contrast radiography apart from a caudally positioned bladder. Although urethral pressure profilometry can be used to demonstrate incompetence of the urethral sphincter mechanism,42 this technique is not readily available in general practice and is predisposed to a number of artifacts that can make interpretation difficult.50,51 In general practice, therefore, the diagnosis is usually made on the basis of breed, history, and elimination of other possible causes based on the results of imaging and laboratory tests.

Most therapies for treatment of urethral sphincter mechanism incompetence correct only one of the above factors; therefore, it is unlikely that any one form of treatment alone will result in long-term cure in all cases. A 50% cure rate is more realistic (Table 118-1).

*Based on the response to the (first) procedure alone (i.e., without any additional treatment or medication). Techniques are listed in descending order of the volume of literature, cases, and follow-up to support them.

Approximately half of affected juvenile bitches become continent after their first estrus.45 Those that do not may be candidates for medical or surgical management. Estrogens are contraindicated in juvenile bitches with urethral sphincter mechanism incompetence because of possible adverse “feedback” effects on the pituitary. Treatment with α-adrenergics such as phenylpropanolamine can be initiated, pending estrus.

In theory, sympathomimetic or parasympatholytic agents should improve continence by increasing urethral tone or reducing intravesical pressure, respectively (see Figure 116-3). Results of clinical trials are variable, however, and long-term adverse systemic effects have not been evaluated. Currently, the most popular medical treatment is the α-adrenergic phenylpropanolamine.15,86,89,98 Affected spayed bitches may also respond to therapy with estrogens such as estriol.62 In some animals that respond initially to α-adrenergics or estrogens, the response ceases eventually; in the case of estrogens, this may occur because of desensitization of estrogen receptors. Estrogens may improve smooth muscle contractility and sensitivity to α-adrenergic stimulation;17,19,23,55,90 therefore, a combined therapy with estrogen and α-adrenergics may reduce the dose of each individual drug, lessening the chance of side effects. Androgens have been used in castrated male dogs; in the author’s experience, the results are disappointing.