Cause: Salmonella spp. (gram-negative rods that belong to the Enterobacteriaceae)

Human Health Significance: Important zoonosis. Dogs and cats may be a source of human infection with some Salmonella serotypes, some of which may be resistant to multiple antimicrobial drugs.

Salmonella are gram-negative, motile, non–spore-forming facultative anaerobic rods that belong to the family Enterobacteriaceae. Most Salmonella exist in two phases, which differ in composition of their flagellar antigens.

Salmonella are ubiquitous organisms that can be isolated from the intestinal tracts of an enormous variety of animal species and are a major cause of enterocolitis and sometimes severe systemic illness in humans and animals. Infections can be transferred between animal species and are zoonotic. Many infections are food borne, especially in association with milk, meat, and eggs. Salmonella spp. have a remarkable ability to survive long periods of time (weeks to years) in the environment, and so fomite transmission is important. In addition, Salmonella can multiply rapidly in contaminated food left at room temperature and can survive freezing for several weeks.2

The genus Salmonella comprises two species, Salmonella enterica and Salmonella bongori, each of which contains multiple serotypes.3 Serotypes of S. bongori are generally associated with cold-blooded animals and rarely have been isolated from warm-blooded animals, including a dog with diarrhea.4 There are six subspecies of S. enterica (Table 45-1) and approximately 2500 different serotypes. These are identified on the basis of agglutination reactions of their O (somatic) and H (flagellar) antigens (see Chapter 36). Subspecies I serotypes, which are responsible for almost all disease in humans and warm-blooded animals worldwide, are assigned names such as S. ser. Typhimurium. Unless named before 1966, serotypes that belong to other subspecies are designated using antigenic formulas. The formulas describe the subspecies, O antigens: H antigens (phase 1): and if present, H antigens (phase 2) (e.g., S. IV 45:g,z51:—). 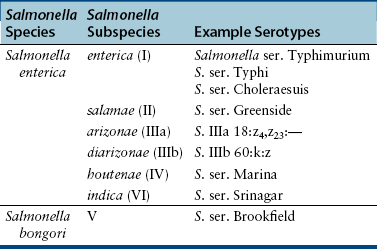 Infection of dogs and cats with Salmonella has been associated with the feeding of raw meat diets,5-9 although commercial dry and raw dog food and pig ear pet treats have also become contaminated with the organism.5,10–13 Occasionally, co-infections with multiple Salmonella serotypes occur.14 Outbreaks of S. ser. Typhimurium infection in cats have been associated with seasonal bird migrations (“songbird fever”).

Salmonella is generally isolated less than 1% of the time from the feces of dogs and cats that are fed processed commercial pet foods,15-19 although one study of household pet dogs in Ontario, Canada revealed a shedding prevalence of 23%.20 The highest rates of infection have been found in group-housed dogs, especially those fed raw meat diets, such as racing sled dogs and greyhound breeding facilities, where prevalences have exceeded 75%.8,21 Salmonella was isolated from the feces of 18 of 26 (69%) healthy pre-race Alaskan sled dogs, and 19 of 30 (63%) diarrheic racing Alaskan sled dogs, which underscored the lack of an association between the isolation of Salmonella and clinical diarrhea.8 Coprophagic behavior may also contribute to salmonellosis in dogs. In cats, the feeding of raw poultry may increase risk for Salmonella infection,22 and occasionally, high prevalences of infection have been detected in group-housed cats18 and shelter cats. Ingestion of infected wild bird species by cats during seasonal bird migrations can also lead to salmonellosis (songbird fever). In a study of diarrheic and nondiarrheic shelter cats in Florida, the prevalence of Salmonella shedding as determined by PCR assay was 6% and 4%, respectively.23 Susceptibility to shedding and disease is highest in immunosuppressed dogs and cats, including young animals, pregnant animals, those in overcrowded conditions, and those with underlying immunosuppressive illness (such as neoplasia, diabetes mellitus, retroviral infection, and immune-mediated disease) or immunosuppressive drug therapy.24,25

After ingestion, salmonellae that survive the acidic environment of the stomach gain access to the intestine, where they disrupt tight junctions and actively invade (1) enterocytes; (2) M cells within the ileum (which sample luminal antigens); and (3) dendritic cells, which send protrusions into the gut lumen between intestinal epithelial cells. Interaction of Salmonella with immune cells and epithelial cells within the gut leads to production of cytokines and chemokines, with massive influx of lymphocytes, macrophages, and neutrophils, sometimes with severe epithelial injury and mucosal sloughing.26 Localization in the mesenteric lymph nodes, Peyer’s patches, solitary intestinal lymphoid tissues, and intestinal epithelium, along with evasion of the host immune response, is followed by persistent shedding, often for several weeks, after which animals can become latently infected. Reactivation of shedding, with or without clinical illness, may occur, sometimes as a result of stress or immunosuppression.27,28

If the organism has properties that allow it to spread systemically and host defenses are impaired, bacteremia and extraintestinal infection follows.29 More virulent strains have a greater ability to multiply intracellularly in nonphagocytic cells. Fever, hypoglycemia, and leukopenia occur. The Salmonella lipopolysaccharide (LPS) can then induce endotoxic shock, with hypotension and activation of the complement and coagulation cascade. The coagulation cascade is also activated with exposure to Salmonella porins, which are hydrophobic outer membrane proteins. Disseminated intravascular coagulation (DIC) follows.

Dogs and cats infected with Salmonella spp. may show no signs or they may develop enterocolitis, focal suppurative infection, or severe systemic illness. The majority of dogs are chronically and subclinically infected. When disease occurs, signs often begin 3 to 5 days after infection or onset of immunosuppression. Fever (occasionally as high as 106°F [41°C]), lethargy, and anorexia may be followed by abdominal pain, vomiting, and watery to mucoid, often hemorrhagic diarrhea, and dehydration. Weight loss may be seen. Diarrhea may take several weeks to resolve. Rarely, chronic intermittent diarrhea that lasts up to 8 weeks develops.30

Severely affected animals develop signs of septic shock (see Chapter 86). Neurologic signs, and signs that relate to endocarditis, arthritis, pancreatitis, pneumonia, peritonitis, and cholecystitis occur in some animals. Infected cats may develop severe enterocolitis, with fever, pancytopenia, and hyperbilirubinemia. Some cats show persistent fever and anorexia with no diarrhea. Conjunctivitis has been described in cats in association with Salmonella infection.31

Occasionally salmonellae localize in a particular organ, such as the lungs or urinary tract (Figure 45-1). Signs of dysfunction of that organ system may follow, even when enteric signs or positive fecal culture results are absent.32 Abortion and stillbirth can occur after transplacental infection, and the dam may also infect her neonates, which leads to fading puppies.33–35 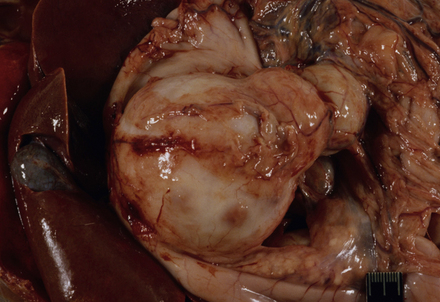 FIGURE 45-1 Large, chronic pancreatic abscess due to Salmonella Typhimurium associated with a pancreatic adenocarcinoma in a 15-year-old castrated male domestic shorthair cat. The mass was multicystic and fluctuant, and when cut open was filled with cloudy fluid and lined by thick tan debris. (Courtesy University of California, Davis, Veterinary Anatomic Pathology Service.)

The traditional diagnosis of canine and feline salmonellosis is made based on culture of the organism in conjunction with clinical signs and assessment of potential risk factors, such as hospitalization, age, environmental exposure, and antibiotic administration. Diagnostic assays available for salmonellosis in dogs and cats are shown in Table 45-2.

Diagnostic Assays Available for Salmonellosis in Dogs and Cats

The CBC in dogs or cats with salmonellosis may be unremarkable or may show a neutrophilia with a left shift; in bacteremic animals, anemia, a degenerative left shift, toxic neutrophils, lymphopenia, and thrombocytopenia are usually present. Rarely, intracellular bacteria are seen within neutrophils.

Thoracic radiographs in animals with salmonellosis may reveal bronchointerstitial to alveolar infiltrates in animals with pneumonia, or pleural effusion with pyothorax. Abdominal radiographs can reveal fluid-filled intestines, decreased serosal detail, and/or mild hepatomegaly.

Depending on the severity of the infection, abdominal ultrasound may be unremarkable in dogs and cats with salmonellosis, or show changes that include abdominal lymphadenomegaly, intestinal wall thickening, fluid-filled bowel segments, hepatomegaly, splenomegaly, or ascites.

A diagnosis of salmonellosis can be made when Salmonella is isolated from a normally sterile site, such as the blood, bronchoalveolar lavage specimens, synovial fluid, or urine specimens collected by cystocentesis. Isolation of Salmonella from feces does not confirm that the organism is the cause of disease, but it can raise suspicion that Salmonella may be playing a role in enterocolitis, and it has zoonotic significance (see Public Health Aspects, later). Isolation also allows antimicrobial susceptibility testing, which is important because many isolates of Salmonella are resistant to multiple antimicrobial drugs.

Salmonella grow readily at 37°C on routine bacteriologic media from specimens that have been collected from a normally sterile site. Selective media are required for specimens that are heavily contaminated with other bacteria such as feces. Examples of selective media include enrichment broths such as tetrathionate broth or Selenite F broth. After enrichment, subculturing is performed on a medium such as deoxycholate, which also favors growth of Salmonella. Many veterinary laboratories incorporate such protocols for isolation of Salmonella as part of a panel for detection of enteropathogenic bacteria. Once Salmonella is isolated, the organism can be identified based on biochemical reactions and serotyping, which involves agglutination testing with O and H antisera. In the future, use of whole cell matrix-assisted laser desorption ionization-time-of-flight (MALDI-TOF) mass spectrometry in veterinary clinical microbiology laboratories should allow identification of Salmonella at the species and subspecies level within minutes.36 It also can identify some important S. enterica subsp. enterica to the serovar level, and could reduce the need for laborious subtyping procedures.37