Cause: Neorickettsia helminthoeca, a gram-negative, obligately intracellular bacteria that belongs to the family Anaplasmataceae

Route of Transmission: Ingestion of the infected trematode vector Nanophyetus salmincola, most often in salmonid fish

Human Health Significance: Nanophyetus salmincola can cause gastrointestinal disturbances and eosinophilia in humans, but N. helminthoeca does not cause human disease.

Salmon poisoning disease (SPD) is caused by the rickettsial pathogen Neorickettsia helminthoeca, which, like other Neorickettsia spp., resides within a trematode (fluke) vector for the course of the trematode’s life cycle. The trematode vector of N. helminthoeca is Nanophyetus salmincola, thought to be the most common trematode species endemic to the United States.2 The disease occurs in dogs, foxes, and coyotes and has also been reported in captive bears, but does not occur in domestic cats.3–5 SPD is geographically restricted to coastal regions of northern California, Oregon, and Washington in the United States, and southern British Columbia in Canada (Figure 31-1). This reflects the distribution of an aquatic snail, Oxytrema silicula (also known as Juga silicula), which is an intermediate host of the trematode (Figure 31-1). The snail is prevalent in coastal streams. A similar disease has been described in dogs from Brazil.6,7 Two related yet antigenically distinct organisms have been isolated from dogs with SPD, N. helminthoeca and the Elokomin fluke fever (EFF) agent.8–12 The EFF agent may be a less pathogenic strain of N. helminthoeca. 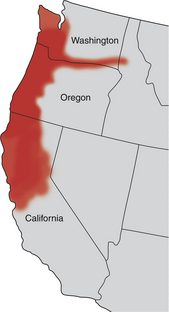 FIGURE 31-1 Geographic distribution of salmon poisoning disease in dogs from the United States. The distribution also extends into the southern portion of British Columbia.

Dogs usually become infected with N. helminthoeca when they ingest encysted trematode metacercariae within uncooked or undercooked freshwater fish, most commonly salmonid fish. The Pacific giant salamander is also a competent second intermediate host. Ingestion of encysted metacercariae is followed by maturation of the trematode, which feeds on the intestinal mucosa and inoculates the rickettsia into the host. The fluke has an oral sucker and a ventral sucker, which are used to grasp host intestinal tissue, although the fluke itself does not cause extensive damage to the intestinal wall.13 Infected trematode ova are shed in the stool for 60 to 250 days.14 After several months, miracidia develop within the eggs, hatch, swim away, and penetrate the snail. They then develop into rediae, each of which give rise to many free-swimming cercariae. Thousands of cercariae are released intermittently from the snail. These rapidly penetrate the skin of a fish (or are ingested by the fish), and encyst throughout the fish as metacercariae (Figures 31-2 and 31-3). Infected fish may contain more than 1000 metacercariae. Infected fish may have visible damage to their skin, and the infection may also interfere with their swimming activity.15 Dog-to-dog transmission of N. helminthoeca has been demonstrated experimentally by mechanical aerosolization or rectal administration of lymph node suspensions or homogenates of rectal mucosa.16 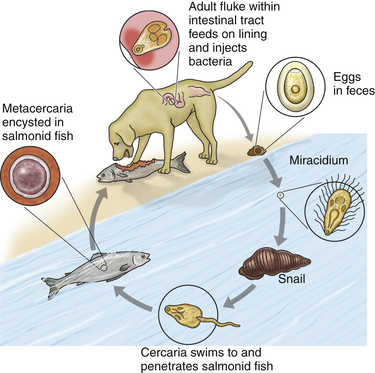 FIGURE 31-2 Life cycle of Nanophyetus salmincola, the trematode vector of salmon poisoning disease. The fluke harbors the rickettsial organism throughout its lifecycle. 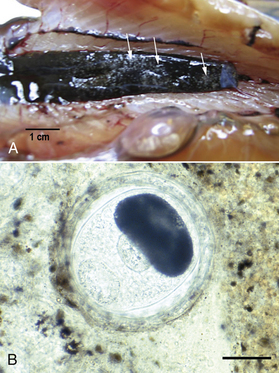 Intact male dogs and Labrador retrievers appear to be overrepresented among dogs with SPD,17 possibly because they are popular with individuals engaged in fishing activities, although dogs of any sex and breed can be affected. Dogs of any age are affected; the median age in one study was 3 years.17 Dogs develop SPD at any time of year. Occasionally dogs from areas not endemic for SPD develop disease after they ingest fish that is imported from endemic areas.18

Most but not all infected dogs have a history of access to or consumption of raw or improperly cooked fish.17,19 Consumption of any part of the fish, including the entrails and skin, may result in SPD. Supermarket-bought salmon may also be infected.17 Infection has also been reported after swimming activity, without apparent exposure to fish.17

N. helminthoeca replicates within macrophages. This results in a granulomatous inflammatory response within the stomach, intestines, lymph nodes, and spleen. Granulomatous meningitis has also been detected in dogs with SPD.20,21 The incubation period ranges from 2 to 14 days (median, 7 days), but may be as long as 33 days.22 The severity of illness varies considerably (Box 31-1). Dogs with peracute infection may be found dead.17 A marked febrile response is commonly detected (>70% of cases) (Box 31-2) and may reach 107.6°F (42°C).17A median rectal temperature of 105°F (40.6°C) was reported in one series of naturally infected dogs.17 Terminally ill dogs may be hypothermic. Virtually all dogs develop inappetence or anorexia, and lethargy is also common. Vomiting occurs in more than 80% of dogs, and rarely, hematemesis is present.17 Diarrhea is also common (>70% of dogs) and may be semiformed to liquid in consistency, sometimes containing frank blood, melena, and, less commonly, mucus.17 Occasionally, a history of diarrhea and vomiting is absent. Other signs include weight loss and increased thirst and urination. Neurologic signs that include mental obtundation, myoclonic twitching, seizures, and apparent neck pain have been reported in fewer than 20% of affected dogs, a primary differential diagnosis being canine distemper virus infection.17

Dehydration is frequently noted on physical examination and may be severe. More than 70% of dogs have peripheral lymphadenomegaly, which may be generalized or involve only some peripheral lymph nodes (see Box 31-2). Lymph nodes may be up to 4 cm in diameter and firm on palpation. Lymphadenomegaly may be absent occasionally, sometimes as a result of lymph node necrosis. Abdominal palpation may reveal pain, and splenomegaly may also be detected. Other abnormalities include tachypnea or labored respirations, tachycardia, scleral or conjunctival injection, and edema that involves the limbs, face, or cervical region.17 Mucosal pallor, tachycardia, and weak pulses may be present in dogs with hypovolemic shock. Cardiac arrhythmias such as ventricular premature contractions have also been noted, and there may be signs of hemorrhage such as epistaxis and hyphema. Rectal examination may indicate the presence of liquid stool, sometimes accompanied by fresh blood or melena.

Thrombocytopenia is present in 90% of affected dogs. Anemia is present in up to 40% of dogs with SPD and generally occurs as a result of gastrointestinal hemorrhage. More commonly, the CBC shows evidence of lymphopenia, thrombocytopenia, or neutrophilia, frequently with bandemia (Table 31-1). Uncommonly, neutropenia occurs.17 Toxic changes may be present within neutrophils, and immature monocytes may occasionally be found in the peripheral blood. Despite the association with helminthiasis, eosinophilia has not been documented.

Hyponatremia and hypokalemia are the most common electrolyte abnormalities in dogs with SPD and result from gastrointestinal losses that occur with vomiting and diarrhea (Table 31-2). Low ionized calcium concentrations may be detected in some dogs, possibly as a result of decreased intestinal absorption. Hypoalbuminemia is present in most (>80%) dogs. Hypoglobulinemia and hypocholesterolemia occur in fewer than 25% of dogs with SPD, but may become profound. Abnormal liver enzyme activities may be present, the most common of which is increased ALP activity,17,20 but increases in the activity of ALT and AST may also occur. Hyperbilirubinemia is present in fewer than 20% of dogs. Azotemia can be evident in dogs with severe dehydration.

Bilirubinuria and proteinuria are frequently detected on urinalysis in dogs with SPD.17 Uncommonly, cylindruria and glucosuria are present, perhaps as a result of renal injury secondary to impaired renal perfusion. Microscopic hematuria occurs in some dogs, possibly reflecting underlying coagulopathies that can occur in dogs with SPD.

Abdominal radiographs may be unremarkable or reveal fluid-filled small intestines; decreased serosal detail; and less frequently, hepatomegaly or splenomegaly. Thoracic radiographs are typically unremarkable or show reduction in size of the intrathoracic vasculature, consistent with hypovolemia.