First Described: In the 1890s, in Argentina (by Malbran and then by Seeber)1

Geographic Distribution: Worldwide but especially in warm, wet environments such as the south-eastern and south-central United States

Human Health Significance: Human infections by R. seeberi are likely acquired from the environment, and direct transmission from affected animals to humans has not been described.

Rhinosporidiosis is caused by Rhinosporidium seeberi, which causes slow-growing tumor-like masses in the nasal cavity. Although once thought to be a fungus, molecular methods have identified this organism as an aquatic protistan parasite (class Mesomycetozoea). The organism is taxonomically located where animals and fungi diverge and is closely related to pathogens of fish.2 The organism is difficult or impossible to culture. Rhinosporidiosis has been most widely reported in humans and dogs, but cats, horses, and other mammalian and avian species may also be affected. There is some evidence that host-specific strains of R. seeberi exist.3

In humans, rhinosporidiosis is most prevalent in southern India, Sri Lanka, and Argentina but also occurs in North America, Africa, Europe, and Asia. In dogs and cats, rhinosporidiosis has been reported from many regions of the United States, Ontario in Canada,4 Argentina,5 Italy in continental Europe,6 and the United Kingdom.7 Within the United States, the disease is most often reported in dogs and cats from the south-central and southeastern states (Figure 66-1). The overwhelming majority of affected dogs are young-adult to middle-aged (with a range of 1 to 13 years of age), otherwise-healthy, large-breed hunting dogs such as Labrador and golden retrievers, Doberman pinschers, Siberian huskies, German shepherds, and Rhodesian ridgebacks. However, small-breed dogs can also be affected.7 No clear sex predisposition has been identified, but of cases in the literature, males have outnumbered females. Affected cats have been outdoor cats. One affected cat had concurrent nasal adenocarcinoma,8 but other cats have had no reported comorbidities. 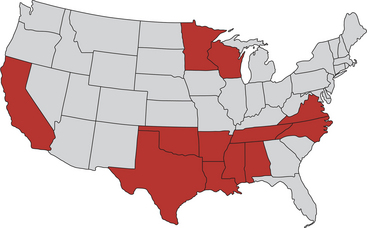 FIGURE 66-1 States within the United States in which rhinosporidiosis has been reported in dogs and cats.

Although the mode of transmission of R. seeberi is not precisely understood, disease often occurs in association with contact with aquatic or marshy environments. It is thought that spores are released into the environment, where they contact susceptible human and animal hosts.2 Spores may be introduced into tissues after trauma to the mucous membranes, where they form sporangia that produce new spores. Because disease in humans also occurs in arid regions, airborne spore transmission has also been suggested.

In dogs and cats, infection by R. seeberi leads to formation of pedunculate or sessile masses within the nasal cavity, usually in the rostral third.6 The polyps range in size from a few millimeters to several centimeters. Clinical signs consist of subacute (weeks) to chronic (>1 year) sneezing with or without epistaxis, snuffling, and sometimes a serous, mucoid, or serosanguineous unilateral nasal discharge. Sneezing may be frequent and severe and associated with excitement or increased activity. In some dogs, a polypoid pink mass protrudes from the nasal cavity. The masses are often stippled with white-yellowish granules less than 1 mm in diameter, which represent mature sporangia.6

Most animals with rhinosporidiosis have no significant abnormalities on blood work. Plain radiography is insensitive for detection of nasal masses caused by R. seeberi.6 Computed tomography (CT) reveals soft tissue masses in the rostral third of the nasal cavity that can enhance with contrast (Figure 66-2). In some cases evidence of turbinate loss is present. The masses, which can be visualized directly using rostral rhinoscopy, are pink to gray and may be covered with miliary white to yellow foci, but these are not always clearly visible (Figure 66-3). 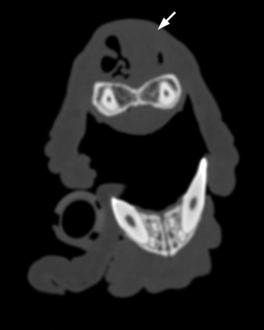 FIGURE 66-2 CT scan of the nasal cavity of a 16-month-old female Labrador retriever with rhinosporidiosis. A soft tissue mass that enhanced with contrast is present in the rostral nasal cavity (arrow). 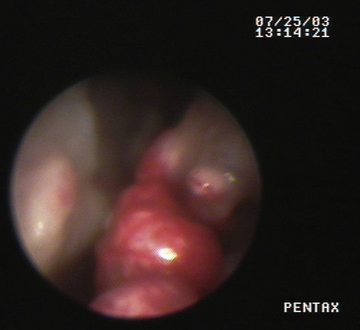 FIGURE 66-3 Rhinoscopic image of a polypoid mass caused by Rhinosporidium seeberi in the nasal cavity of a 10-year-old intact female yellow Labrador retriever.