• Bacterial mechanisms of drug resistance include production of enzymes that inactivate AMDs, drug exclusion through membrane alterations and efflux pumps, and modification of the site of action of the AMD.

• Strategies that minimize selection for drug resistance include (1) confirmation of the presence of infection before AMD treatment is commenced, (2) proper identification of the infecting organism, (3) selection of agents with activity specific to the pathogen present, (4) administration of an adequate dose of AMD, and (5) administration of AMD for the proper duration of time.

• Selection of an appropriate AMD should be based on the activity of the agent against the suspected pathogen; knowledge of drug pharmacokinetics, which includes bioavailability and tissue penetration; consideration of host factors such as concurrent illness, medications, or immunosuppression; and knowledge of drug pharmacodynamics, that is, whether the drug exhibits concentration- or time-dependent antibacterial effects.

Antibiotics have been considered one of the greatest inventions of the 20th century. The modern era of antimicrobial drug (AMD) treatment began with the discovery of sulfonamides in 1935.1 In the 1940s, the therapeutic value of penicillin and streptomycin was discovered, and by 1950, the “golden age” of AMD therapy was underway. With the increasing use of AMDs, there has been a transition to an era of widespread antimicrobial resistance among important veterinary and human pathogens. This has been compounded by a declining rate of development of new classes of AMDs.

Antimicrobial resistance genes have existed in microbes long before antimicrobial agents were used in therapy. Microbe populations generally consist of a mixture of genetically susceptible and resistant organisms. The use of AMDs exerts pressure that favors selection of the resistant microbes (“survival of the fittest”), within both the targeted bacterial population and other commensal bacteria (which have the potential to become pathogenic when host defenses are impaired). The chance that resistant bacterial populations will emerge depends on the ability of the population to rapidly acquire mutations, the ability of host defenses to eliminate resistant bacteria, and the AMD concentrations at the site of infection.

Guidelines for prudent antimicrobial use have been published by several professional veterinary organizations in order to reduce selection for resistant bacterial pathogens.2-6 Individual hospitals are encouraged to develop antimicrobial guidelines based on evaluation of their local prevalence of AMD resistance. Strategies that minimize selection for antimicrobial resistance include documentation of the presence of infection; proper identification of the infecting organism; and the use of agents that are as specific for the pathogen as possible, at the proper dose and for the proper duration of time. These strategies are described in more detail in this chapter.

Identification of the Infecting Organism

The detection of fever or leukocytosis does not imply bacterial infection and the need for antibiotic treatment, especially given the relatively high prevalence of sterile inflammatory and immune-mediated diseases in dogs and viral infections in cats. Selection of the most appropriate AMD relies on knowledge of (1) the presence of an infectious agent, (2) the type of infectious agent present, and (3) the susceptibility of the agent to different AMDs. In some cases, treatment with antibiotics may not be necessary even though the cause of disease is bacterial. Some infections undergo spontaneous cures without the aid of an antibiotic. For example, a cat bite abscess can often be drained and resolved without the need to administer an antibiotic (see Chapter 57).

In some situations, collection of a specimen for cytology or histopathology permits a diagnosis of infection to be established. The identity of some infectious agents, such as rickettsial and fungal pathogens, may be presumptively identified to the genus or species level based on their morphology. If skin cytology from a dog reveals cocci (a Gram stain is not necessary to confirm the presence of gram-positive cocci), then the presence of Staphylococcus pseudintermedius is highly probable. If, on the other hand, cytology from an ear swab reveals rods, the possibility of Pseudomonas aeruginosa must be considered. In either case, this knowledge is valuable for selecting initial antibacterial therapy. The use of molecular diagnostic techniques, such as PCR assays, can also allow rapid identification of an infecting organism, which can help to guide antimicrobial drug selection. For example, identification of a vector-borne pathogen (e.g., Rickettsia spp., Ehrlichia canis) is helpful because doxycycline is usually the first drug of choice for the majority of these pathogens. Unfortunately, unless susceptibility to a particular AMD is predictable, these techniques do not typically provide information about AMD susceptibility. Given the emergence of widespread AMD resistance, especially among bacteria and some fungi, collection of specimens for culture and susceptibility before treatment with AMDs is commenced has become more and more important. Although there is an initial cost to the client for culture and susceptibility testing, long-term costs to the client may be reduced considerably because of decreased prescription of unnecessary or inappropriate AMDs, improved likelihood of rapid resolution of the underlying disorder with early diagnosis and appropriate treatment, and reduced need for more expensive, second- or third-line AMDs. Administration of AMDs without identification of the infectious agent can also decrease subsequent chances of successful culture and proper diagnosis if the disorder does not resolve.

In animals with life-threatening infections, institution of AMD treatment is necessary before the results of culture and susceptibility become available. The choice of treatment at this stage can be based on cytology and knowledge of the type of infections that most commonly occur at the anatomic site involved (also known as bacteriologic statistics). Because of the life-threatening nature of these infections, the practice of “de-escalation” (as opposed to “escalation”) is employed. This is the practice of initially selecting a highly active agent that has a high probability of successful elimination of the pathogen; then once the infectious agent has been identified, the drug spectrum should be changed or narrowed according to culture and susceptibility results. If the infection is life threatening, highly active agents such as an aminoglycoside or fluoroquinolone with or without a β-lactam can be selected initially. Then, if culture and susceptibility show susceptibility to β-lactams, treatment should be continued with these agents alone.

Classification of Antimicrobial Drugs Based on Their Mechanism of Action 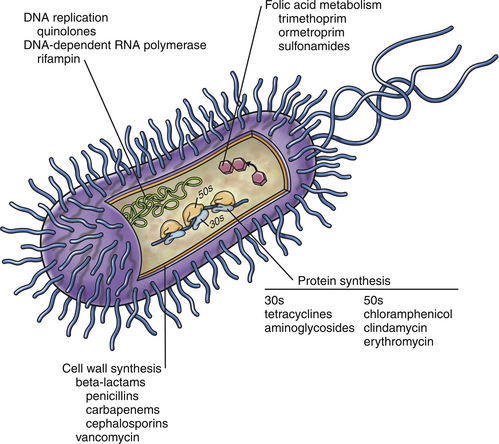 FIGURE 6-1 Sites of action of antimicrobial drugs within the bacterial cell.

Antibacterial drugs have also been classified for veterinary use as first-line, second-line, or third-line drugs.8 First-line drugs are those that could be used for empirical selection in the absence of or pending the results of culture and susceptibility testing, and include amoxicillin, cephalexin, doxycycline, and trimethoprim-sulfonamides. Second-line drugs are those to be used on the basis of culture and susceptibility testing and because of the lack of any appropriate first-line options. These include ticarcillin, piperacillin, amikacin, and third-generation cephalosporins. Fluoroquinolones were also included in this group because in human medicine, excessive fluoroquinolone use has been associated with emergence of antimicrobial resistance and treatment failures.9 Fluoroquinolones could be considered as first-line drugs for dogs and cats suspected to have serious gram-negative bacterial infections that require treatment pending the results of culture and susceptibility testing. The use of third-line drugs, including vancomycin, linezolid, and carbapenems such as imipenem and meropenem, is usually reserved for situations when certain criteria are met8:

1. Infection must be documented based on clinical abnormalities and culture.

2. The infection is serious and has the potential to be life-threatening if left untreated.

3. Resistance is documented to all other reasonable first- and second-line options.

4. The infection is potentially treatable.

5. The clinician may seek advice from an infectious disease clinician or a clinical microbiologist to discuss antimicrobial susceptibility test results, and to discuss the use of these agents if there is unfamiliarity with their use. In some instances, there may be other viable options (e.g., topical therapy).

Pharmacokinetic and pharmacodynamic parameters (PK-PD exposure relationships) are important determinants of the efficacy of AMDs and serve as the basis for determination of clinically effective dosage regimens and susceptibility breakpoints and for the development of guidelines for AMD use for specific types of infections.10

The killing of microbes by AMDs may be classified as concentration dependent or time dependent. AMDs that exhibit concentration-dependent killing are fluoroquinolones and aminoglycosides. These drugs work optimally when the peak concentration in the plasma (Cmax), or the area under the curve (AUC) exceeds the MIC by a defined factor (Figure 6-2). These are typically bactericidal agents and the ability to kill bacteria increases as the AMD concentrations increase. Target concentrations have been defined for laboratory animals and humans and have been extrapolated to veterinary patients. For example, the peak concentration to MIC ratio (Cmax/MIC) should exceed 8 to 10 for optimum dosing of aminoglycosides. The AUC for a 24-hour interval to MIC ratio (AUC24/MIC) should exceed 100 for fluoroquinolones. For some infections, a ratio of 125 is better, and in some patients (e.g., immunocompromised patients with life-threatening infections), a ratio of 250 may be desirable. Drugs that exhibit concentration-dependent killing also have postantibiotic effect (PAE). The PAE is the persistence of antimicrobial effects after drug concentrations at the site of infection fall below the MIC. The exact cause of the PAE varies with the drug, but it may result from irreversible binding of a drug to the target site. The duration of the PAE is influenced by the duration of antibiotic exposure, the drug concentration, the bacterial species present, and the class of antibiotic. For concentration-dependent antibiotics, administration of the total daily dose as a single dose every 24 hours is preferred to a smaller divided dose, in order to maximize Cmax or AUC. For aminoglycosides, this also reduces drug toxicity.7 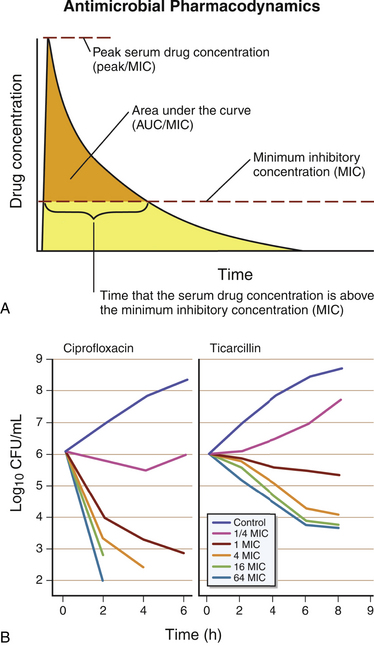