First Described: Pneumocystis was first discovered in Brazil in 1909 (Chagas), when it was initially mistaken for a trypanosome.1 It was first reported in dogs in the 1950s.2

Mode of Transmission: Opportunistic invasion of immunosuppressed hosts after transmission by aerosol

Human Health Significance: Severely immunocompromised humans are at risk for pneumocystosis, but only P. jirovecii infects humans. Whether humans can become colonized with Pneumocystis strains that infect dogs is not known.

Pneumocystis is a saprophyte of low virulence with a worldwide distribution. Its primary habitat is the mammalian lung, where it causes opportunistic pneumonia. Pneumocystis pneumonia has been reported in dogs, pigs, horses, goats, primates, and humans. Subclinical or latent infections are common in rats, mice, guinea pigs, rabbits, cats, sheep, and various wildlife species. Most reports of pneumonia due to Pneumocystis spp. infection are linked with documented or suspected immunodeficiency syndromes in the host.3

The taxonomy of Pneumocystis is uncertain. Previously it was classified as a unicellular protozoan in the phylum Sarcomastigophora. However, ultrastructurally the reproductive behavior of Pneumocystis is similar to the ascospore formation by yeasts, and its organelles and staining properties by light microscopy resemble those of pathogenic fungi. Phylogenetic classification based on 16S-like rRNA sequences indicates that Pneumocystis is most closely related to the fungi of the class Ascomycetes, especially Saccharomyces cerevisiae, and so it has been reclassified as fungus, “albeit an odd one.”4 Biologically, it behaves similarly to a protozoan, because it is susceptible to drugs used to treat protozoal infections but resistant to most antifungal drugs. The morphology of Pneumocystis organisms and the histopathology of the lesions they produce in humans and animals throughout the world are similar. Although controversial, five species of Pneumocystis have been described, which appear to be highly host specific: two species that infect rats, Pneumocystis carinii and Pneumocystis wakefieldiae; one species that infects mice, Pneumocystis murina; a species that infects rabbits, Pneumocystis oryctolagi; and Pneumocystis jirovecii (pronounced “yee row vet zee”), which infects humans.5–7 Species designations for the organisms isolated from dogs and other animals require further genetic and biologic study, although DNA analysis of Pneumocystis that infected a Cavalier King Charles spaniel suggested that dogs are infected with a unique species, with the proposed name of Pneumocystis canis.8 Biologic differences between isolates from different hosts are supported by the relative difficulty of experimental cross-host species transmission. Because historically P. carinii was thought to cause Pneumocystis pneumonia in humans, Pneumocystis pneumonia has long been referred to as “PCP.” Despite the name change to P. jirovecii in the 1970s, the term PCP has been retained for convenience. For purposes of this chapter, the organism will be referred to simply as Pneumocystis. Strain differences may also exist within species of Pneumocystis.

Pneumocystis appears to be maintained in nature by transmission from infected to susceptible hosts. The primary mode of spread is thought to be airborne droplet transmission.9 Sporadic disease may occur as a result of activation of latent infection by stress, crowding, and immunosuppressive therapy during hospitalization. Clinical disease can also be experimentally activated by treatment with glucocorticoids or cytotoxic chemotherapy. A higher prevalence of infection was found in dogs with distemper compared with a corresponding control population.10 Genetic analysis of isolates from humans suggests that recent acquisition of infection from another person, rather than reactivation of infection, may be responsible for clinical illness.11,12

Pneumocystis is inhaled and can colonize the lower respiratory tracts of clinically healthy mammals; however, it rarely multiplies to large numbers in the lungs of healthy hosts. Transmission of infection to neonates can occur via aspiration of contaminated amniotic fluid when the placenta is infected. When impaired host resistance (especially reduced CD4 T-lymphocyte counts) or preexisting pulmonary disease is present, rapid proliferation of organisms can occur.19 The entire life cycle of Pneumocystis is completed within alveolar spaces (Figure 71-1). In this location, two main forms, the trophozoite (1 to 4 µm in diameter) and cyst (8 µm), are found. Trophozoites adhere closely to alveolar epithelial cells and are thought to undergo sexual reproduction by conjugation, with formation of a diploid zygote. The zygote becomes a sporocyte (or precyst) and undergoes meiosis followed by mitosis. This leads to formation of a mature, thick-walled cyst or spore case, which contains eight haploid ascospores. The cyst ruptures, and the spores transform into trophozoites, which replicate asexually to form more trophozoites, or sexually to form more cyst forms. The transmissible form has not been identified.7 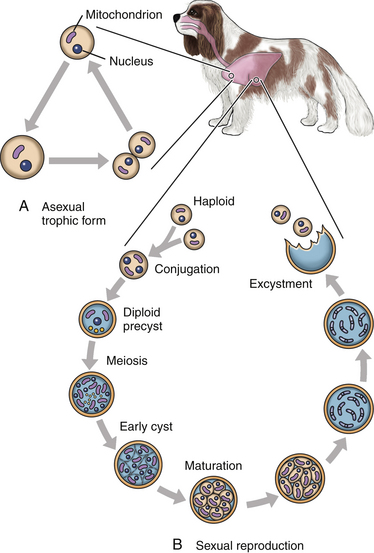 FIGURE 71-1 Life cycle of Pneumocystis species. Trophozoites adhere to alveolar epithelial cells in the lungs and undergo both asexual (A) and sexual (B) reproduction. Sexual reproduction is initiated by conjugation, which results in formation of a zygote. Meiosis occurs followed by mitosis, which leads to the formation of 8 ascospores within a mature cyst. The cyst ruptures, releasing spores that become trophozoites. (Modified from Walzer PD, Smulian AG. Pneumocystis species. In: Mandell GL, Bennett JE, Dolin R, eds. Principles and Practice of Infectious Diseases, 7 ed. Philadelphia, PA: Elsevier; 2010:3377-3390.)

The overgrowth and clustering of Pneumocystis within alveolar spaces leads to blockage of capillaries and decreased gas exchange. Intra-alveolar organisms are often accompanied by thickening of alveolar septa, but they seldom invade the pulmonary interstitium and are rarely phagocytosed by alveolar macrophages. With an adequate immune response, the body eliminates the infection, but the removal of large numbers of organisms and cellular debris may take up to 8 weeks. Both the presence of the organisms and the mild inflammatory response they provoke contribute to pulmonary damage.

Although Pneumocystis infections are usually confined to the lungs, organisms are rarely reported in extrapulmonary sites. In humans, extrapulmonary pneumocystosis occurs primarily when there is overwhelming pulmonary infection, profound underlying immunodeficiency, and after long-term use of aerosolized pentamidine for prophylaxis against P. jirovecii pneumonia in HIV-infected patients.20 Sites of extrapulmonary infection include lymph nodes, spleen, liver, bone marrow, gastrointestinal tract, eyes, thyroid gland, adrenal glands, kidneys, heart, pancreas, and external auditory canal. Extrapulmonary pneumocystosis has been described in one dog.

The typical clinical history in dogs with pneumocystosis is that of gradual weight loss and respiratory difficulty that progresses over 1 to 4 weeks. The weight loss, which occurs in spite of a good appetite in most dogs, may be associated with diarrhea and occasional vomiting. Cough is not always reported, but reduced exercise tolerance is uniform. Infected animals often show a minimal or temporary response to antibiotic and glucocorticoid therapy.

Abnormalities on physical examination of dogs with pneumocystosis include dyspnea, tachycardia, and increased dry respiratory sounds on thoracic auscultation. Animals are often in poor condition and cachectic and can show dermatologic changes, such as superficial bacterial pyoderma and demodicosis (Figure 71-2). Although the mucous membranes are generally of normal color, they may be cyanotic in severely affected animals. Affected dogs remain relatively alert and afebrile, although mild pyrexia may be present. 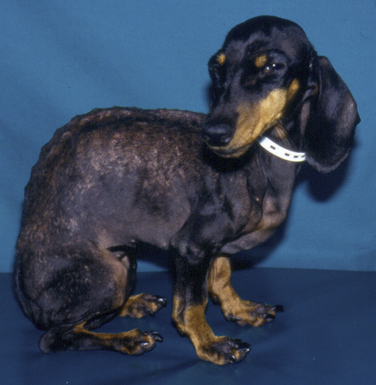 Hematologic abnormalities in dogs with pneumocystosis are nonspecific. Neutrophilic leukocytosis is the most consistent finding. Less frequently, eosinophilia or monocytosis are found. Lymphocyte counts can be elevated, normal, or low. Polycythemia may occur secondary to arterial hypoxemia from impaired gaseous exchange. Thrombocytosis is often present in miniature dachshunds. Artifactual thrombocytopenia and megathrombocytosis have been observed in Cavalier King Charles spaniels, which may have a hereditary basis that is likely unrelated to the suspected immunodeficiency.

Total serum proteins are usually within reference limits in dogs with pneumocystosis, with a low to borderline-low globulin level, which correlates with low γ-globulin levels on serum protein electrophoresis.17 In some dogs, mild hyperglobulinemia is present.21 Mild hypoalbuminemia may also be detected. Arterial hypoxemia, hypocapnia, and increased arterial blood pH indicate an uncompensated respiratory alkalosis. The arterial pO2 is often lower than expected based on the clinical signs and thoracic radiographs. 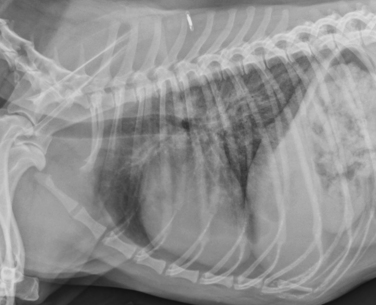 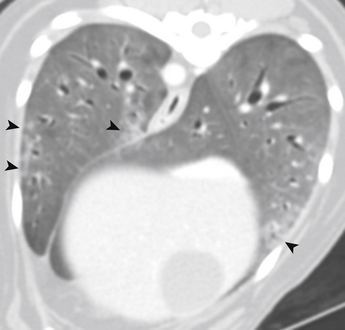 FIGURE 71-4 Thoracic CT scan from a 4-year-old female spayed Cavalier King Charles spaniel with pneumocystosis that was evaluated for lethargy, inappetence, and respiratory distress. There is a diffuse interstitial pattern and focal peripheral alveolar infiltrates (arrowheads).

Diagnostic assays available for pneumocystosis in dogs or cats are described in Table 71-1. Identification of pneumonia in a Cavalier King Charles spaniel or miniature dachshund should always raise suspicion for pneumocystosis.

Diagnostic Assays Available for Pneumocystosis in Dogs or Cats