Oral joint supplements in the management of osteoarthritis

33 Oral joint supplements in the management of osteoarthritis

Osteoarthritis (OA) is the single most common cause of lameness in horses (Clegg & Booth 2000) and in one survey, approximately 60% of lameness problems in horses were related to OA (Caron & Genovese 2003). Similarly OA is the most common form of human arthritis, affecting at least 20 million Americans and with its prevalence expected to double over the next two decades (Helmick et al 2008, Lawrence et al 2008). OA involves a complex interaction of biologic and pathologic processes highlighted by eventual degradation of articular cartilage (McIlwraith 1996, 2005). With the US horse population currently estimated to be 7.3 million (AVMA 2007), this means millions of horses currently have this debilitating musculoskeletal condition. Multiple conventional therapies are available for treating OA with the goal of preventing further degradation while restoring function (McIlwraith 2005, Trumble 2005).

Oral joint supplements (OJSs) are a common choice of clients, and have been perceived as a benign treatment for OA in horses (Trumble 2005). The high prevalence of OA in combination with the lack of a definitive cure for OA has probably contributed to the popularity of OJSs among owners, veterinarians, and trainers. These supplements, according to recent market surveys, are the most popular type of nutritional supplements for horses and account for approximately 1/3 (34%) of all equine supplement sales, 1/2 of all pet supplements sold in the US for equine consumption and it is estimated that 49% of all horse owners purchase and administer some form of dietary supplement in their horses (Packaged Facts 2008). In a study of feeding practices in 3-day event horses, the authors found that horses were supplemented with an average of four different oral products daily including electrolytes, plain salt and OJSs (Burk & Williams 2008).

Oral joint supplements are fed to horses for one of two purposes: (1) to treat the lame or make chronically unsound horses sound or (2) to prevent or delay the development of joint problems. The first instance is flawed because often the source of lameness is never diagnosed when the owner or trainer elects to use these oral supplements without consulting a veterinarian. The second premise is hard to disprove but is the basis for high usage of both licensed drugs such as intramuscular Adequan™ and intravenous Legend™, as well as OJSs.

The critical components of articular cartilage are type II collagen fibrils (which provide a structural framework) and extracellular matrix (ECM), which consists of aggrecan molecules and water (Fig. 33.1). The aggrecan molecule consists of aggregations of proteoglycan molecules on a hyaluronan (HA) backbone. The proteoglycan molecule, in turn, consists of a protein backbone with chondroitin sulfate and keratin sulfate side chains. These carry negative charges and due to repulsion as well as some attraction of water provide the compressive resistance to the articular cartilage (McIlwraith 2005). Maintenance of these molecules is critical and some nutraceuticals provide potential building blocks for these molecules. The osteoarthritic process is associated with multiple deleterious mediators from inflamed synovial membrane and trauma as well as being released to initiate a cascade of degradation in the articular cartilage. Interleukin 1 (IL-1) is considered a major cytokine initiating this cascade and this can influence other cells to cause increased release of metalloproteinases, aggrecanase and prostaglandin E2 (PGE2). While this negative process can be influenced by certain nutraceuticals in vitro (Fig. 33.2) there is less certainty about their effects in vivo after undergoing digestion. 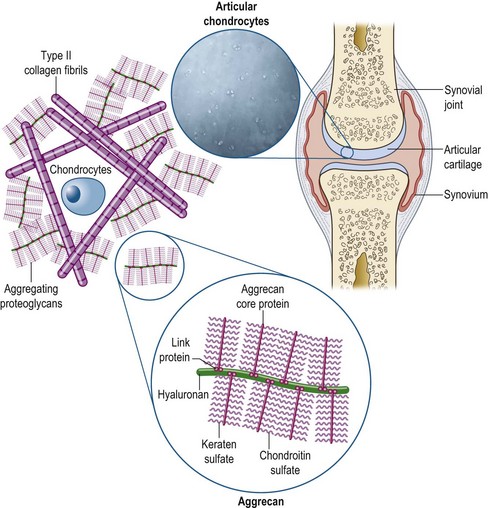 Figure 33.1 A schematic depiction of articular cartilage. The left panel shows the major components including chondrocytes, type II collagen fibrils and aggregating proteoglycans (aggrecans). The aggrecan structure is shown in the bottom panel. 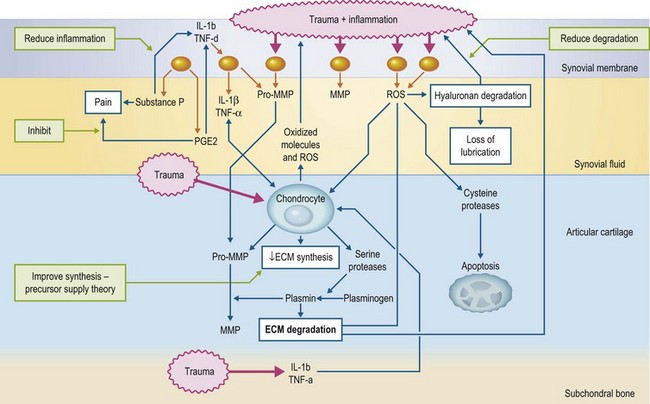 Figure 33.2 A schematic outlining the mechanisms for development of osteoarthritis and the possible mechanisms of action for oral joint supplements in mitigating these processes.

In 2005 nutraceutical sales reached more than 1 billion for companion animals, and that number was expected to double in the next 3 years. There are more than 100 equine nutraceutical products currently on the market in the US, and such products are used worldwide. This is a disturbing trend for an industry that for the most part, is unregulated by the FDA or other governing bodies, and has weak in vivo scientific basis (Oke & McIlwraith 2008).

The majority of joint supplements include glucosamine and/or chondroitin sulfate along with other added ingredients. Historically, the first products available for the horse included a chondroitin sulfate product from bovine trachea and a complex of glycosaminoglycans and other nutrients from the sea mussel, Perna canaliculus. Glucosamine (GU) is an amino monosaccharide and is the principal component of O-linked and N-linked glycosaminoglycans, and is produced in the body by the addition of amino groups to glucose; this molecule is subsequently acetylated to acetyl glucosamine. Hyaluronan (HA) keratan sulfate and heparan sulfate are composed in part of repeating units of acetyl glucosamine. Chondroitin sulfate (CS) consists of alternating disaccharide units of glucuronic acid and sulfated N-acetyl galactosamine molecules and is a principal glycosaminoglycan of aggregating proteoglycan (aggrecan).

Many OJSs have GU and CS as principal components, and may contain additional ingredients including manganese, vitamin C, hyaluronan (hyaluronic acid or HA), polyunsaturated fatty acids (PUFAs), rare earth mineral supplements, unsaponified avocado soy (ASU), cetylmyristoleate, methylsulfonylmethane, and various herbs. With the exception of the latter two (no good equine documentation available), these various products will be discussed below. Box 33.1 discusses the terminology and regulatory issues involved in the use of OSJs.

The term nutraceutical was adopted in veterinary medicine from the medical profession and refers to compounds that are neither nutrients nor pharmaceuticals by combining the words “nutrients” (nourishing food or food component) with “pharmaceuticals” (medical drug) (Duren 2005). The nutraceutical category describes a broad list of products sold including nutrients, dietary supplements, functional foods and phytochemicals (including herbs) that are not recognized by the US Food and Drug Administration (FDA) as food or drugs and are intended for the treatment or prevention of disease. The difference between a feed and a nutraceutical is that a nutraceutical is unlikely to have an established nutritive value. Feeds are required to have nutritive value and are accountable, by labeling, for these values. Oral joint supplements fall in between food and drugs and have advantages over either because they are not required to list ingredients or nutrient profiles as required by feeds, and in many cases, intended to treat or prevent disease without first undergoing proper drug approval (Duren 2005).

A supplement was initially defined legally by the Federal Food, Drug and Cosmetic Act (FFDCA), but this was amended in 1994 by the Dietary Supplement Health Education Act (DSHEA). Technically, the DSHEA only covers human products and defines a dietary supplement as a product intended to supplement the diet and contains at least one or more of the following: a vitamin; a mineral; an herb or other botanical; an amino acid; a dietary substance for use to supplement the diet by increasing intakes; or a concentrate, metabolite, constituent, extract or combination of any of the previously mentioned ingredients (McIlwraith 2004). The jurisdiction of veterinary products is primarily the responsibility of the North American Veterinary Nutraceutical Council (NAVNC), which was formed in 1996 to promote and enhance the further quality, safety and long-term effectiveness of nutraceuticals used in veterinary medicine (Trumble 2005). The NAVNC has defined a veterinary nutraceutical as a “non-drug substance that is produced in a purified or extracted form and administered orally to provide agents required for normal bone and body structure and function with the intent of improving the health and well-being of animals” (Booth 2004).

The DSHEA allows manufacturers to make claims with regard to health, structure or function, and nutrient content of a nutraceutical. The Center for Veterinary Medicine allows products to be marketed as nutraceuticals provided they do not claim to treat, cure, or mitigate disease (Trumble 2005); hence, the common practice of advertising of improving joint “health”. The FDA perceives veterinary nutraceuticals as unapproved drugs; however, even though they are not labeled or marketed as drugs. The FDA does not regulate these products unless they become unsafe or have labels that claim a drug use and, therefore, there is no requirement to prove safety or efficacy of a nutraceutical. It is the author’s opinion that there are two principal issues faced with this regulation: (1) The issue is sufficiently low on the FDA radar screen that there is very little attention paid to it, and (2) There is hardly an incentive for a manufacturer of a nutraceutical to prove efficacy, as such research costs money and a negative result could hurt sales (McIlwraith 2004).

Manufacturers do not have to register themselves or their supplements with the FDA. In general a manufacturer has to comply with the FDA Ingredient Recognition Program, which entails applying for complete ingredient definitions as described by not-for-profit organization of state and federal feed regulators, the Association of American Feed Control Officials (AAFCO) (McIlwraith 2004). There are no requirements of Good Manufacturing Practices (GMPs) for manufactures to guarantee high-quality and batch-to-batch consistency (Oke & McIlwraith 2008) and because there is no post-production monitoring of veterinary nutritional supplements, a myriad of poor quality supplements are available (Oke et al 2006).

Mechanisms of action and in vitro studies

The effects of varying doses of GU and CS alone and in combination on cartilage metabolism in normal and recombinant IL-1α conditioned equine articular cartilage has been evaluated in the author’s laboratory using equine cartilage explants (Dechant et al 2005). Articular cartilage explants were allocated randomly to treatment with four doses of GU, CS, or GU + CS in the absence of IL-1 (normal explants) for treatment with four dosages of GU, CS, or GU + CS in the presence of 40 mg/ml recombinant IL-1α (Gibco-Light Technologies, Grand Island, NY, USA) (IL-1 conditioned explants). The patented joint supplements used were SCHG49GU and TRH122 low molecular weight sodium (Nutramax Laboratories, Edgewood, MD, USA). The treatment groups investigated for both normal and IL-1 conditioned explants were: treatment without GU or CS; four GU concentrations, 12.5, 25, 125 and 250 µg/ml; four CS concentrations, 12.5, 25, 125 and 250 µg/ml; and four GU + CS concentrations 12.5, 25, 125 and 250 µg/ml each of GU and CS (in a 1 : 1 ratio by concentration). There was no significant negative effect of GU, CS, or GU + CS on normal cartilage explant metabolism. In normal (no IL-1) explants, the most substantial effects observed with the GU, CS and GU + CS treatment were in reducing GAG degradation, without evidence for an advantage of GU + CS compared to GU or CS alone. On the other hand, the highest dosage of GU + CS was more effective than all other treatments in reducing GAG degradation in IL-1 conditioned explants. The ability of GU and CS to protect against cartilage matrix degradation in osteoarthritic and stimulated chondrocytes in cartilage explants have been observed in other in vitro studies (Sandy et al 1998, Fenton et al 2000, 2002, Grande et al 2000, Lippiello 2000, 2002, Nerucci et al 2000, Orth et al 2002, Byron et al 2003). It was also noted that the higher doses of test ingredients (125 and 250 µg/ml) tended to be more effective than the lower dosages (Dechant et al 2005) and these dosage ranges were within the ranges of other in vitro studies. It has been pointed out that high dosages of GU such as 6.5 and 25 mg/ml have been shown to have detrimental effects on cartilage metabolism and chondrocyte viability in studies using bovine articular cartilage explants (De Mattei et al 2002).

• Purported mechanisms explaining the role for glucosamine (GU) in osteoarthritis are: (1) provision of substrate for synthesis of cartilage glycosaminoglycans (precursor supply theory); and (2) mediation of inflammatory responses