An open fracture is one in which fractured bone is exposed to environmental contamination resulting from disruption of soft tissue integrity.31 Open fractures are typically the result of high-energy trauma such as from automobile accidents and most frequently involve bones with minimal soft tissue coverage, such as those of the antebrachium and crus.2 Complete and detailed assessment of the patient’s systemic health should be performed and resuscitation of the patient instituted as necessary before the fracture is evaluated. Oxygen saturation, electrocardiography (ECG), blood pressure monitoring, serum chemistry panel, complete blood count, and thoracic and abdominal radiographs are frequently indicated. Appropriate analgesics and, if required, intravenous fluid resuscitation, oxygen supplementation, and blood products are administered before musculoskeletal injury is addressed. Successful management of open fractures involves patient assessment, fracture classification, antibiotic therapy, debridement and irrigation, wound management, restoration of the soft tissue envelope, and fracture stabilization.

Open fracture classification schemes describe the relationship and degree of soft tissue damage and are designed to correlate with treatment guidelines and prognosis (Box 42-1).

Type I: An open fracture with a wound smaller than 1 cm. Surrounding soft tissues are mildly/moderately contused. Frequently, the external wound is created from the inside out by sharp bone fragments. Often the bone retracts back to below the level of the skin. 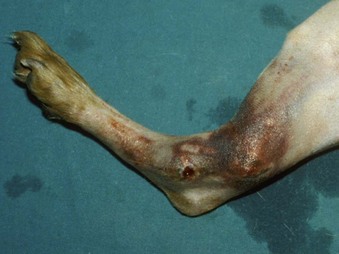 Type II: An open fracture with a wound larger than 1 cm without extensive soft tissue damage, flaps, or avulsions. The external wound typically is created from the outside in by higher-energy forces. 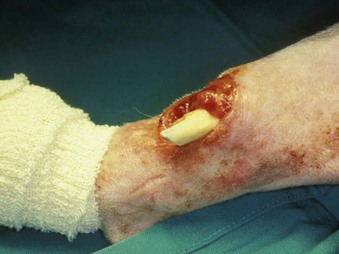 Type II open fracture involving the medial crus of a dog. The foot is toward the left of the image. (Photograph courtesy Nic Lambrechts, BVSc, MMed Vet, Diplomate, ECVS.)

Type IIIA: An open fracture with adequate soft tissue coverage of the fractured bone despite extensive soft tissue laceration or flaps, or high-energy trauma, irrespective of the size of the wound. 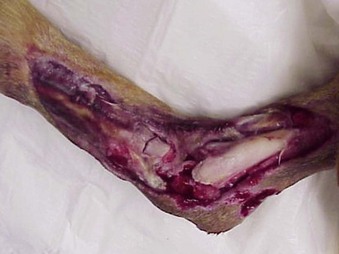 Type IIIB open fracture of the tarsus of a dog. The crus is toward the right of the image, the foot toward the left. (Photograph courtesy Walter C. Renberg, DVM, MS, DACVS.)

Open fractures in human patients can be classified according to numerous methods; the most common is the Gustilo-Anderson classification scheme.58 The major shortcoming of this scheme is that it results in only moderate (60%) interobserver agreement.10,40 Ideally, a classification scheme should be simple, anatomically all-inclusive, and based on pathoanatomy, and it should focus on anatomic characteristics of the injury.58 The Orthopedic Trauma Association has proposed a new untested classification scheme (S1-3 M1-3 A1-3 B1-3 C1-3)58,79 that consists of five factors, including skin defect (S), muscle injury (M), arterial injury (A), bone loss (B), and contamination (C). They are divided into mild, moderate, and severe subgroups (1 to 3). This system provides much more precise pathoanatomic definition, and it encompasses the most essential categories for assessment of severity of open fractures.58 Such a classification system, if adopted, could help communicate patient status, guide treatment decisions, and predict prognosis.

After assessment and treatment of possibly life-threatening comorbidities, attention can be given to the open fracture. If active arterial hemorrhage is present, it should be addressed immediately with application of a tourniquet until ligation of the hemorrhaging blood vessel can be performed. The neurovascular integrity of the limb should be assessed; this may aid in establishing the prognosis. Any wound overlying a facture is assumed to have resulted in contamination of the fracture. Broad-spectrum antimicrobials should be administered intravenously at the time of presentation.

Preventing further contamination and soft tissue trauma is of utmost importance. A temporary sterile covering should be applied until proper debridement and irrigation can be performed. Copious amounts of sterile, water-soluble lubrication should be placed directly into the wound, and the hair should be clipped widely. Bordering skin is aseptically cleansed with a 4% chlorhexidine gluconate solution.45 Gross debris is removed, nonviable soft tissues are surgically debrided, and the wound is copiously lavaged with sterile isotonic fluid at a desired pressure of 7 to 8 psi. This can be accomplished with a 1-liter fluid bag placed with an external pressure sleeve and the pressure raised to 300 mm Hg.25 Alternatively, a 0.05% chlorhexidine solution can be an effective lavage solution, providing antibacterial activity without causing tissue reaction.1 A sterile dressing and bandage are applied with rigid external support to minimize pain and ideally to prevent propagation of soft tissue and orthopedic and neurovascular trauma until definitive surgical debridement and fracture stabilization can be performed. Once the patient has been stabilized, radiographic evaluation is performed to determine the precise orthopedic abnormalities.

Significant debate has focused on the most appropriate method by which to manage open fractures. Open fractures have been considered one of the true orthopedic emergencies by some; however, optimal treatment for open fractures has not been definitively described in the scientific literature.31,61 Antibiotics are one required component of successful treatment. The importance of prompt initiation of intravenous antibiotics has been well documented.31,46,61,62 A prospective study of 1104 open fractures in human beings documented a significant decrease in infection rate when antibiotics were administered within 3 hours after injury (4.7%), compared with 4 hours or longer after injury (7.4%).61 The lowest infection rates are achieved when a combination of antibiotics, covering Gram positive and Gram negative aerobic and anaerobic organisms, is administered. Factors found to increase the risk of infection include lack of antibiotics, resistant organisms, too much time from injury to initiation of antibiotics, extensive soft tissue trauma, and a positive post debridement-irrigation culture.61

In a prospective study of 1025 open fractures in human beings, treating all open fractures with emergent surgical debridement, administering antibiotics before surgery, primarily closing type I and type II fractures with delayed closure of type III fractures, and using no internal fixation (use of external skeletal fixation preferred) resulted in significantly fewer infections (5%) when compared with historical controls (12%).31 The main shortcoming of this landmark study was the lack of independent variable analysis. Numerous more recent studies also acknowledge the importance of many factors toward achieving a successful outcome; however, early administration of broad-spectrum antibiotics is described by many to be the single most important factor in reducing infection.61,69,74

Infections of open fracture wounds are increasingly the result of pathogens acquired in a hospital setting. Unnecessarily maintaining an open fracture wound likely increases the rate of nosocomial infection.80 The authors of a prospective, randomized, double-blinded study found that only 18% of open fracture infections were caused by organisms cultured at the time of initial presentation.60 Numerous studies have demonstrated that the organism cultured initially (the contaminating organism at the time of presentation) is not the organism that ultimately causes infection.61,62,66 Hospital-acquired organisms play a prominent role in the development of infections in open fractures, many of which are resistant to numerous antibiotics.61 With these consequences in mind, early soft tissue coverage may aid in preventing disastrous complications. The time frame of “cleanest” may be that immediately following initial aggressive debridement and irrigation, presuming that debridement is adequate and no preexisting local infection is present.

Systemic antibiotic(s) selected for initial treatment of an open fracture should be directed toward a wide range of Gram-positive and Gram-negative organisms.12,62 Bacteria frequently isolated from initial wound cultures include Staphylococcus spp., Streptococcus spp., Klebsiella spp., Pseudomonas spp., Clostridium spp., Enterobacter spp., and Escherichia coli.62,66,70 A randomized, double-blinded study of 171 open fractures in human beings treated with ciprofloxacin or the combination of a second-generation cephalosporin and gentamicin found no difference in infection rates of type I and type II fractures at 5.8% and 6%, respectively. The infection rate for type III fractures was significantly higher for the ciprofloxacin only group (31%) than for the cephalosporin/gentamicin group (7.7%).60 The degree of soft tissue compromise and increased contamination in type III fractures put them at higher risk for development of infection; therefore, they require broader antimicrobial coverage.60 Initial use of a first- or second-generation cephalosporin for type I and II fractures and the combination of a cephalosporin and a fluoroquinolone for treatment of type III fractures have been recommended to avoid the potential adverse effects of an aminoglycoside.60 Continuation of antibiotics, however, should be guided by results of aerobic and anaerobic cultures and sensitivities. Cultures acquired before surgical debridement can be predictive of subsequent organisms that may cause infection, especially in cases of delayed time to presentation.57,60 However, the decision to continue antibiotic therapy is best based on post–surgical debridement samples.52 Additionally, postdebridement samples aid in evaluation of the success of debridement and risk of subsequent infection.52,73

Implantation of antibiotic beads is a treatment option. The application of local antibiotics to severe open fractures has been shown to be a successful adjuvant for preventing the development of deep infection.9,37,59 The authors of a retrospective evaluation of 1085 open fractures in human beings concluded that combining antibiotic-impregnated polymethylmethacrylate beads with systemic antibiotics significantly decreased infection rates from 12% to 3.7%.59