Geographic Distribution: Worldwide, although infections in dogs and cats are most commonly reported from Brazil, the western United States, and Australia

Mode of Transmission: Inhalation or cutaneous inoculation of organisms in the environment, with opportunistic proliferation in the face of impaired host immune defenses

Human Health Significance: Direct transmission of disease from animals to humans does not occur, but humans have developed disease after bites or scratches from healthy dogs or cats.

Nocardia are filamentous, branching, gram-positive bacteria that belong to the family Nocardiaceae (Figure 43-1). More than 50 Nocardia species have been recognized since the advent of molecular identification methods, approximately half of which are human and animal pathogens.2 The advent of molecular methods has also led to extensive revision of the taxonomy of Nocardia spp. Species that belong to the former N. asteroides complex are now considered distinct species and include Nocardia cyriacigeorgica (formerly N. asteroides sensu stricto), Nocardia abscessus, Nocardia nova, Nocardia farcinica, and Nocardia otitidiscaviarum.2 Knowledge of the species involved is clinically important, because each Nocardia species differs in its antimicrobial susceptibility patterns, epidemiology, and pathogenicity. They also differ in their cell wall mycolic acid content, which affects their ability to stain with acid-fast stains. 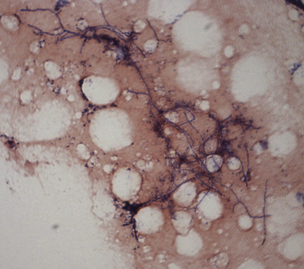 Like actinomycosis, nocardiosis is a suppurative to granulomatous, localized, or disseminated opportunistic infection caused by filamentous bacteria. However, unlike Actinomyces spp. (which are commensals of mucous membranes), Nocardia spp. are ubiquitous soil saprophytes that degrade organic matter. They are also found in fresh and salt water, in dust, and on decaying plants and fecal matter.2 They can be carried mechanically on the claws or skin. Infections are acquired via inhalation of organisms or inoculation via puncture wounds. Transfer of infection between animals does not occur.

Nocardiosis is much less frequently reported in dogs and cats than actinomycosis, although nocardiosis is increasingly recognized in both human medicine and companion animals in association with immunocompromise, such as occurs with potent immunosuppressive drug therapy (especially cyclosporine).3-5 Where vaccination for canine distemper virus (CDV) is inadequate or not widely instituted, nocardiosis in dogs has been associated with CDV-induced immunosuppression.6

The prevalence of nocardiosis and the predominant Nocardia species that cause disease vary geographically. For example, within the United States, human nocardiosis has been most commonly reported from the southwestern states. Dry, dusty, and windy conditions in these areas may facilitate aerosolization and dispersal of nocardiae.7 Dogs and cats from Australia and the western United States are most commonly infected with Nocardia nova.8–10 Other species isolated from dogs and cats are shown in Table 43-1.11–16 In humans, Nocardia brasiliensis is the most common species isolated from patients that reside in tropical locations such as the southwestern United States, Central and South America, and Australia.

Nocardia Species Isolated from Dogs and Cats with Nocardiosis

The pathogenicity of Nocardia spp. is influenced by the strain and growth phase of the organism, and host susceptibility. Virulent Nocardia strains are facultative intracellular pathogens that inhibit phagosome-lysosome fusion, neutralize phagosomal acidification, resist oxidative burst, secrete superoxide dismutase, and alter lysosomal enzymes within neutrophils and macrophages.17 These effects are partly related to the content and structure of mycolic acids within the bacterial cell wall, which vary among strains and throughout the growth phase. Filamentous log-phase cells in the environment can be highly resistant to phagocytosis. Some strains have a greater propensity to invade the central nervous system (CNS).19,20

The normal host response to infection is characterized by an initial pyogenic inflammatory response, but a cell-mediated immune response is necessary to destroy the organisms. Diminished host resistance, especially impaired cell-mediated immunity (CMI), is a primary factor in susceptibility to nocardiosis and the extent to which dissemination occurs.

Cutaneous-subcutaneous nocardiosis, the most common form in cats (>75% of affected cats), is characterized by slow and progressive circumferential spread of a nonhealing, draining wound (Figure 43-2). Lesions are typically subacute to chronic. Infections of feeding tube sites can also occur.21 Mycetoma-like lesions in the inguinal area resemble those described for rapidly growing mycobacterial infections (see Chapter 44), with multiple draining sinuses. These may result from contamination of “raking” injuries inflicted by the hindlimbs during fighting behavior,8 or contamination of traumatic wounds from penetrating plant material. Cutaneous-subcutaneous nocardiosis was documented in 8 of 9 dogs from Brazil6 but represents the minority of canine nocardiosis cases in California and Australia.8,9 Dogs with cutaneous involvement typically develop draining wounds and masses, often on the head and limbs. Osteomyelitis can occur in association with cutaneous lesions. 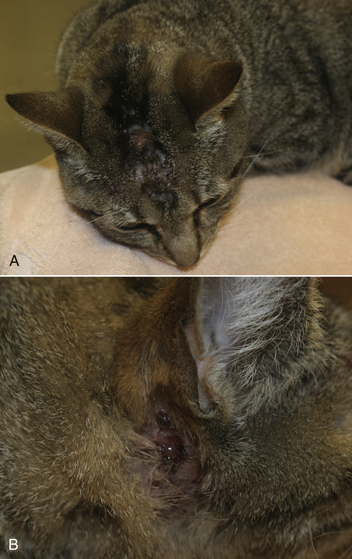 FIGURE 43-2 Six-year-old male neutered domestic shorthair cat with cutaneous-subcutaneous nocardiosis. The lesions progressed over at least a year after a cat bite abscess that was initially treated with amoxicillin-clavulanic acid. They consisted of nodular and crusted lesions on the head (A) and cervical region (B) that drained fluid and extended down the cervical region to the cranioventral thorax. The cat tested negative for retroviruses. (Courtesy University of California, Davis, Veterinary Dermatology Service.)

The pathogenesis of pulmonary or disseminated nocardiosis is similar to that of the deep mycoses. Branching nocardial filaments fragment into small, unicellular particles that are aerosolized and inhaled, possibly in dust. Once within the lung, Nocardia spp. proliferate in the face of immune suppression, which leads to formation of intrapulmonary masses or pneumonia, hilar lymphadenopathy, and/or extrapulmonary masses and pyothorax (Figure 43-3, A). Pulmonary nocardiosis is the most common form of nocardiosis in humans and also occurs in dogs and less commonly in cats. In dogs, it can have a peracute onset characterized by tachypnea, hemoptysis, hypothermia, collapse, and death; however, subacute to chronic clinical signs are more common.22-25 Co-infection with CDV is occasionally reported.6,26,27 Disseminated nocardiosis occurs when organisms in the lung erode into blood vessels and spread systemically, with abscess formation in a variety of organs. This results in signs of lethargy, fever, inappetence, and signs that relate to the location of the infectious process. Disseminated disease occurs in cats as well as in dogs. The most frequently involved extrathoracic organs after dissemination are skin and subcutaneous tissue, kidney, liver, spleen, lymph nodes, CNS, eye, bone, and joints. In dogs and cats, CNS lesions can result in seizures or neurologic signs that relate to the local effects of abscesses or granulomas in the brain, meninges, or spinal cord (see Figure 43-3, B). CNS involvement is common in human nocardiosis. Peritoneal nocardiosis has rarely been reported in cats, possibly as a result of penetrating wounds to the abdomen.8,28

Physical examination findings in animals with cutaneous-subcutaneous disease consist of chronic, sometimes crusted, ulcerated, nonhealing draining wounds, and in cats may involve the extremities, inguinal area, flank, head, bridge of the nose, and neck (see Figure 43-2). Animals with pulmonary or systemic involvement may have a thin body condition, lethargy, and fever. Tachypnea and cough may be present, and lung sounds may be increased (with bronchopneumonia) or decreased (with pyothorax). Involvement of the liver, spleen, and lymph nodes may result in hepatomegaly, splenomegaly, and/or peripheral or abdominal lymphadenomegaly. Ophthalmic examination may reveal chorioretinitis. Bone or joint infection results in focal limb swelling and lameness. Animals with CNS involvement may show mental obtundation, anisocoria, decreased menace and pupillary light responses, head tilt, nystagmus, decreased gag reflexes, and/or delayed or absent placing reactions.

A diagnosis of nocardiosis is usually suspected based on the presence of persistent pyogenic to pyogranulomatous inflammatory lesions and the presence of filamentous bacteria, together with a history of immunosuppression, although the last is not always present. Confirmation of the diagnosis requires culture.

Hematologic abnormalities in nocardiosis are similar to those with actinomycosis (nonregenerative anemia, neutrophilic leukocytosis with a left shift, monocytosis, and sometimes marked hyperglobulinemia). However, in immunosuppressed animals, lymphopenia, monocytopenia, and eosinopenia may be present. Hypercalcemia associated with granulomatous disease was reported in a cat with nocardiosis.29

Examination of pleural effusion, bronchoalveolar lavage fluid, and aspirates of abscesses from animals with nocardiosis typically reveals suppurative to pyogranulomatous inflammation, with large numbers of degenerate neutrophils. Gram-positive, often partially or weakly acid-fast, beaded, filamentous organisms that branch at right angles may be observed individually or in loose aggregates (see Figure 43-1). The filaments may also fragment to form rods and coccoid forms. In contrast, Actinomyces spp. is not acid fast, and Mycobacterium spp. do not branch. When the infecting Nocardia sp. is not acid fast, it may not be distinguishable from an Actinomyces sp. organism. With Romanowsky-type stains, organisms are eosinophilic or basophilic and have a beaded appearance. They are usually around 0.5 µm in diameter and up to 30 µm long, but thicker organisms were described in a dog infected with N. abscessus (2 µm).5 Macroaggregates (i.e., sulfur granules) occur infrequently in effusions. In contrast to actinomycosis, mixed bacterial populations in deep tissue sites are rarely present. 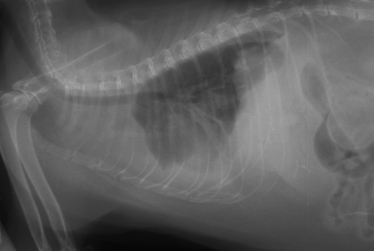 FIGURE 43-4 Lateral thoracic radiograph of a 4-year-old male neutered domestic shorthair cat with disseminated nocardiosis. Pleural effusion is present and obscures the cardiac silhouette. A mass is associated with the caudal aspect of the left caudal lung lobe.

Abdominal ultrasound findings in dogs and cats with disseminated nocardiosis have not been described in detail because disseminated disease with abdominal organ involvement is rare. However, intraparenchymal mass lesions and flocculent ascites fluid might be expected.

Nodular lung lesions similar to those described in humans were identified with computed tomography in one dog with disseminated nocardiosis.5 Computed tomographic and MRI abnormalities in dogs and cats with confirmed CNS nocardiosis have not been reported. One dog with suspected nocardiosis based on histopathology had a large, T2-hyperintense circumscribed lesion in the occipital cortex that was consistent with a brain abscess, together with widespread cerebral edema and herniation of the cerebellum through the foramen magnum.4