The Galápagos Archipelago is located in the Pacific Ocean, approximately 1000 km (600 miles) west of the South American coast at the level of the equator. The islands and associated islets are a part of Ecuador (Figure 24-1). “Galápagos” refers to the Spanish name given to the giant land tortoises native to the islands. Beginning with Charles Darwin’s visit in 1835, several studies of this unique reservoir of endemic biodiversity have formed an important part of the foundation of modern evolutionary theory. At least 26 endemic land bird species are present on the islands, including the 13 highly diversified finch species often referred to as “Darwin’s finches.” 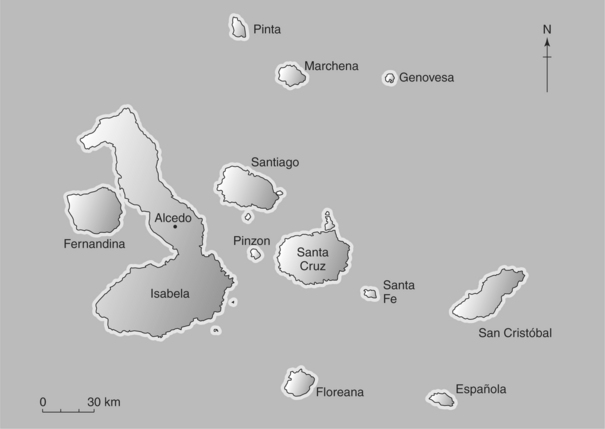 Fig 24-1 The islands and islets of the Galápagos are a part of Ecuador.

Permanent human colonization of the Galápagos Islands was delayed until the 1800s, but significant anthropogenic events have occurred in the last two centuries, including the introduction of foreign species, environmental change by humans and introduced species, harvesting of wildlife, and expanding human settlements. Since 1959, the islands have been protected as the Galápagos National Park, and the surrounding waters have been protected as the Galápagos Marine Reserve since 1998. Human settlement is currently limited to less than 3% of the land, with the majority of the people living on Santa Cruz and San Cristóbal, followed by small human populations on Isabela and Floreana. However, the resident human population has continued to grow rapidly, and the introduction of exotic, sometimes invasive, species continues to be a threat despite aggressive efforts to exclude them.24

The potential introduction of new pathogens has been a growing concern to the conservation of Galápagos birds.29 Pathogens may have severe effects when introduced to novel ecosystems, where individuals may lack natural resistance, and island populations might be particularly susceptible. For example, diseases, especially avian pox and avian malaria, have been implicated as major factors in the decline of native avian populations in the Hawaiian Islands.21,22,30 Unlike Hawaii, the Galápagos avifauna has undergone relatively few extinctions, and no bird species has become extinct. In the 1980s, Culex quinquefasciatus, the mosquito vector for avian malaria, was identified in Galápagos, and its establishment was recently confirmed.28 The observation of avian poxlike lesions noticed in domestic chickens on the Galápagos Islands, followed by similar observations often made in endemic birds, raised significant local concerns about the possible introduction of pathogens to the endemic populations.

Recognizing the need for gathering objective information to assess the risk of introduced diseases to the archipelago, a collaborative effort was initiated in 2001 among the Galápagos National Park Service, the Charles Darwin Research Station, the University of Missouri–St. Louis (UMSL), and the St. Louis Zoo.13 The major goals were to establish current health status of native bird populations and to identify disease threats. Additional goals included conducting research studies to elucidate mechanisms and evolution of disease in island populations and to facilitate the transfer of knowledge among partners through training opportunities and workshops.

This chapter summarizes the current state of knowledge on this ongoing effort to monitor avian health in the Galápagos Islands. The efforts of us and our associates may be broadly classified in several categories: general health assessment of bird populations, identification and characterization of known pathogens, and identification of avian pathogens in domestic chickens. Ultimately, the information gathered as part of these conservation efforts should be applicable to the management and conservation of the Galápagos Archipelago’s unique avifauna.

The Galápagos health studies have been possible because of a unique relationship with ecologists and evolutionary biologists. Partnerships with basic researchers have allowed us to minimize the handling efforts, obtain access, and minimize duplication of resources needed to access wild bird populations throughout the archipelago. In most instances, this relationship has allowed us to interpret the roles of health, disease, host, and pathogen within an ecologic context that is applicable to species management and conservation at the population level.26

All the studies were conducted in strict accordance with guidelines stipulated by the Galápagos National Park and in adherence to preobtained permits. Most uninhabited islands in the Galápagos Archipelago pose unique logistical challenges to access, collection, and preservation of biologic samples.

Whole blood collected for genetic studies has been preserved in a lysis-buffered solution,8 which maintains genetic material stable through a broad range of environmental temperatures without the need for refrigeration. We have used a field centrifuge unit to harvest serum or plasma in the field and therefore minimize artifacts related to red blood cell metabolism. Field centrifuge units are available from several manufacturers (e.g., Vulcon Technologies, Grandview, Missouri) and can be powered from a battery source. Fresh blood smears have been prepared immediately after collection to minimize risk of artifacts, and sometimes these have been fixed and stained in the field using commercially available, modified Wright-Giemsa stains. We have also obtained adequate quality smears without fixing them in the field. White blood cell (WBC) counts have subsequently been done on whole blood using standard avian WBC count techniques with a hemacytometer and a field microscope. Alternatively, for small blood samples, and when fresh whole blood was not immediately available, leukocyte counts have been estimated from fixed blood smears using standard techniques. In cases in which a microscope was not immediately available (or impractical to take in the field), the smear estimation technique has been shown to provide reliable and practical leukocyte counts.17 Samples that were stored frozen were usually transferred to Nalgene cryotubes, which may withstand the low temperatures of cryostorage.

Biologic samples (e.g., serum, plasma, tissues, swabs) have been frozen in the field using a portable cryopreservation unit (“dry shipper”). These units must be precharged with liquid nitrogen, but once charged, will hold the temperature and preserve samples for a prolonged period, depending on the unit specifications. The design of the dry-shipper unit is a double wall that absorbs the liquid nitrogen, and the vapors in the sample-holding chamber maintain the samples frozen. Thus there is no standing liquid nitrogen, making these units safe, light, and practical for field use. In addition, these units may be transported safely in most commercial airlines if properly loaded. When thawing samples, we have learned that extreme caution must be taken in the case of inadequate sample containers, because these may expand rapidly as temperatures equilibrate and may expel contents at high speeds, with the risk of significant bodily injury.

International, national, and local permits from agencies regulating wildlife, agricultural, or biologic trade have always been obtained before samples were transported to the appropriate laboratories for testing.

Health assessment studies provide a baseline of information against which health-related threats may be compared, including establishing reference parameters for normal hematology and plasma chemistry values and identifying serologic exposure to potential pathogens in natural populations. Species systematically surveyed were studied concurrently with ecologic or population surveys. These combined studies provided a natural history background against which the information gathered could be interpreted. Colonial and aquatic species are useful subjects for these studies because their health is likely to reflect the status of their ecosystems. Colonial living habits could make certain species more susceptible to epizootics and to both natural and anthropogenic environmental disasters.

The waved albatross (Phoebastria irrorata) is a well-known member of the Galápagos avifauna, and population estimates suggest that a minimum of 31,000 to 35,000 adults exist.1 The majority of the population breeds on the island of Española, in the Galápagos Archipelago, but a few pairs may breed on the island of La Plata, near the west coast of Ecuador. The Galápagos population has been stable for at least 25 years, but it may be considered “vulnerable” by criteria set by the International Union for Conservation of Nature and Natural Resources (IUCN), on the basis of a restricted breeding range. As part of a health assessment study, hematologic and plasma biochemistry reference values were established for this species (Table 24-1), and a serologic survey showed no seroreactivity to the majority of common avian pathogens, with the exception of common seroreactivity to group-1 adenoviruses.14 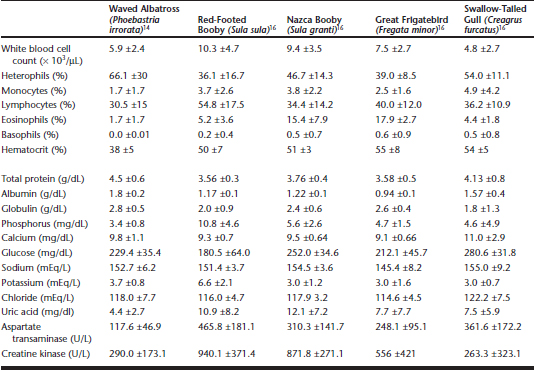 The flightless cormorant (Phalacrocorax harrisi) is an endemic species only found in the western part of the Galápagos Archipelago, on Fernandina and Isabela islands. They were studied throughout their geographically limited range. Hematology assessments, plasma biochemistries, and microscopic evaluation of blood smears revealed the frequent occurrence of microfilariae (33.3%) in this species.19 Although seronegative to a broad panel of avian pathogens (including paramyxoviruses 1, 2, and 3), seroreactivity to group-1 adenoviruses was a common finding (30.9%) in the sampled population, which was similar to observations made for the waved albatross. Seroreactivity to Chlamydophila psittaci was seen in 10.8% of the cormorants sampled.

A concurrent study done on the endangered Galápagos penguin (Spheniscus mendiculus), another endemic species, also detected circulating microfilariae in a large percentage (>20%) of blood smears collected between 2003 and 2004.20 Birds were seronegative to a broad panel of infectious diseases, but a large percentage of the penguins showed seroreactivity to C. psittaci, indicating that exposure might be common in this species.20

On Genovesa Island, located in the northeastern part of the archipelago, four species of seabirds—red-footed boobies (Sula sula), great frigatebirds (Fregata minor), Nazca boobies (Sula granti), and swallow-tailed gulls (Creagrus furcatus)— were studied from the same colony in 2003.16 In addition to establishing baseline reference values for these species (Table 24-1), birds were specifically tested for C. psittaci and screened for hemoparasitism. Although no evidence of C. psittaci was detected, we observed low-grade, circulating parasitemias by Haemoproteu s-like organisms in three of the species, with varying frequencies. Prevalences were highest in great frigatebirds (29.2%; 7/24), followed by swallow-tailed gulls (15.8%; 3/19), red-footed boobies (8.7%; 2/23), and Nazca boobies (0/25). The clinical significance and disease consequences of these hemoparasites are still unknown, but infected great frigatebirds showed higher heterophil:lymphocyte ratios than uninfected birds. This ratio has been proposed as a reliable indicator of stress in domestic chickens.6