Affected Hosts: Cats and wild felids, dogs and wild canids; other hemoplasma species cause disease in a variety of other animal species.

Mode of Transmission: Experimentally, transmission can occur through ingestion or injection of infected blood; the mode of transmission in the field uncertain. Biting or aggressive interactions are a suspected mode, and possibly vertical transmission. Ticks are suspected to transmit Mycoplasma haemocanis. Other unidentified arthropod vectors may also be involved.

Human Health Significance: DNA sequences that match those found in Mycoplasma haemofelis were detected in a human co-infected with HIV and Bartonella henselae. DNA sequences of other animal hemoplasmas have also been detected in humans.

Hemotropic mycoplasmas (hemoplasmas) are small (0.3-0.8 µm), unculturable mycoplasmas that reside on the surface of erythrocytes and can cause variable degrees of hemolytic anemia in infected hosts. Hemoplasmas infect a wide variety of mammalian species, including humans, and have a worldwide distribution. Although previously classified as Haemobartonella and Eperythrozoon spp., sequence analysis of the 16S rRNA genes of these organisms has shown that they are closely related to the pneumoniae group of mycoplasmas, which includes the human mycoplasmal pathogens Mycoplasma pneumoniae and Mycoplasma genitalium.

At least three hemoplasma species infect domestic as well as wild cats, Mycoplasma haemofelis, ‘Candidatus Mycoplasma haemominutum,’ and ‘Candidatus Mycoplasma turicensis.’ The ‘Candidatus’ prefix is applied to newly discovered hemoplasmas until more information is available to support their classification. This is because hemoplasmas cannot be cultured in the laboratory, which limits full characterization of these organisms. M. haemofelis (previously the Ohio strain, or large form of Haemobartonella felis) is the most pathogenic organism and can cause moderate to severe hemolytic anemia in immunocompetent cats. The resulting disease has been referred to as feline infectious anemia. Using cytologic evaluation of blood smears, M. haemofelis organisms are cocci that sometimes form short chains of three to six organisms (Figure 41-1). M. haemofelis is the least prevalent of the three feline hemoplasmas. It has been found using PCR in 0.5% to 5% of sick cats at veterinary hospitals. The whole genome sequences of M. haemofelis and M. haemominutum have been determined.3–5 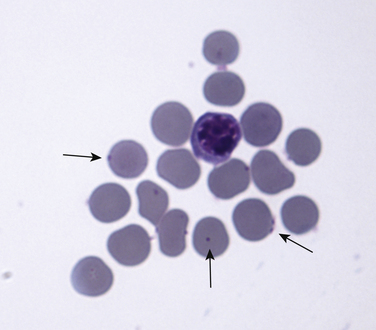 Infection of cats by hemoplasmas is strongly associated with male sex, nonpedigree status, and outdoor access (Box 41-1).8,12,15,16 Infection with ‘Ca. M. haemominutum’ is more prevalent in older cats, presumably because the chance of acquiring persistent subclinical infection increases over time. In contrast, young cats may be more likely to develop disease after infection by M. haemofelis. Some studies, but not others, have shown an association between retrovirus and hemoplasma infections. Cats infected with M. haemofelis in the United States were 6 times more likely to be FIV infected than cats negative for hemoplasmas.15

Several hemoplasma species also infect dogs. Infection with Mycoplasma haemocanis (previously Haemobartonella canis) has been associated with hemolytic anemia in splenectomized dogs, and rarely in dogs with other immunosuppressive disease or concurrent infections. The 16S rRNA gene of M. haemocanis has the same sequence as M. haemofelis, but the whole genome sequence of M. haemocanis distinguishes it as a different species.17 M. haemocanis is a coccoid organism that often forms long chains of organisms (Figure 41-2). The prevalence of this infection is particularly high in kennel-raised dogs, which are often infected subclinically.18 In the southwestern United States, infection was also prevalent among coyotes.19 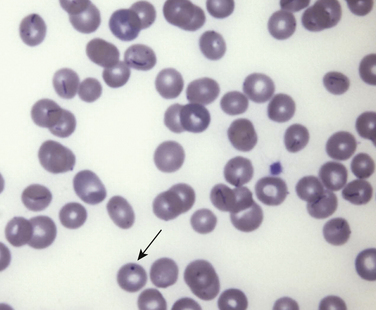 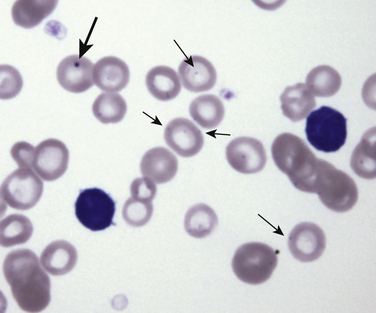 The mode of transmission of hemoplasmas remains unclear. To some extent, fleas and other arthropod vectors may be capable of transmitting feline hemoplasmas,23 but experimental evidence for vector-borne transmission of feline hemoplasmas is weak. Transmission of M. haemocanis by the brown dog tick, Rhipicephalus sanguineus, has been demonstrated experimentally, although this was before PCR assays were available to confirm infection.24 Geographic variation in the prevalence of hemoplasma infection in dogs and cats supports a role for arthropod vectors in transmission. For example, in Europe, infection with M. haemocanis is more prevalent in Mediterranean countries, which follows the distribution of Rh. sanguineus. Vertical (e.g., transplacental) spread has also been hypothesized and has been documented for bovine hemoplasmas. Biting has been suggested as a means of transmission of feline hemoplasmas, and the strong male sex predilection, recent history of cat bite abscessation in some cats, and association with FIV infection in some studies supports this mode. Additionally, studies in Switzerland found that subcutaneous inoculation of blood that contained ‘Ca. M. turicensis’ resulted in transmission, whereas inoculation of saliva that contained ‘Ca. M. turicensis’ did not.25 This suggests that hemoplasma transmission by social contact (saliva via mutual grooming etc.) is less likely than transmission by aggressive interaction (blood transmission during a cat bite incident). Because infection can also be transmitted by ingestion of blood, it may be that the biting cat (rather than the bitten cat) is most at risk for acquisition of infection. Transmission of M. haemocanis through ingestion of infected blood has also been described,26 so aggressive interactions between dogs may also have the potential to transmit hemoplasmas; however, this mode of transmission remains to be proven in field circumstances. Transmission can also occur following blood transfusion.

Because only M. haemofelis infection is associated with significant anemia in cats, only the pathogenesis of disease induced by this species is described here. After experimental infection, there is a delay of 2 to 34 days before the onset of clinical signs. Anemia then occurs and persists for about 18 to 30 days (acute phase), although its severity and chronicity vary considerably between infected cats. Anemia predominantly results from extravascular hemolysis, and the onset of anemia is usually followed by a strong regenerative response with reticulocytosis. The organism resides in an indentation on the erythrocyte surface (Figure 41-4). Production of both cold and warm reactive erythrocyte-bound antibodies, increased osmotic fragility, and decreased erythrocyte life span have been noted in infected cats.27–29 The organisms can also “bridge” adjacent erythrocytes, which might promote splenic trapping and removal of red blood cells. In contrast, erythrocyte-bound antibody formation and significant reticulocytosis have not been documented in cats infected with ‘Ca. M. haemominutum’ or ‘Ca. M. turicensis.’ 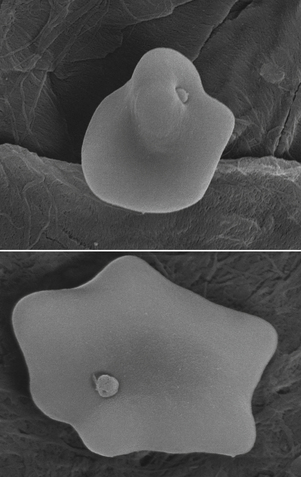 Anemia can result in signs of lethargy, inappetence, pallor, and weakness. Some owners report that their cats eat dirt or litter or lick cement (pica). Weight loss and dehydration can occur. Rapid development of anemia may result in neurologic signs, vocalization, collapse, and death. In some infected cats, cyclical changes in the hematocrit and numbers of infected erythrocytes occur, with sharp declines in the hematocrit correlating with appearance of large numbers of organisms in blood smears.30-32 The proportion of erythrocytes associated with visible organisms on blood smears can decline from 90% to less than 1% in less than 3 hours.33,34 These dramatic fluctuations in organism numbers appear to result from rapid replication of M. haemofelis, followed by rapid clearance from the blood as a result of the host’s immune response. Repeated antigenic variation in M. haemofelis may allow the organism to again proliferate in the face of this immune response, which contributes to ongoing fluctuations in organism numbers.

In cats that survive the acute phase, the hematocrit then returns to normal or near-normal (recovery phase), and organisms can no longer be visualized in blood smears. It is possible that at least some of these recovered cats remain persistently infected, whereby the organism evades the host immune system, and that recrudescence of anemia may follow stress, pregnancy, intercurrent infection, or neoplasia.32,33 However, evidence is accumulating that differences may exist in the ability of hemoplasmas to persist within the host, the carrier state being more frequent for ‘Ca. M. haemominutum’ but less frequent for M. haemofelis and ‘Ca. M. turicensis.’ In cats, splenectomy has a variable effect on the course of hemoplasmosis. Recrudescence of anemia and bacteremia has been documented in some chronically infected cats after splenectomy, although other studies suggest that splenectomy increases the number of visible organisms in blood smears without causing significant anemia.32,34 Infection of splenectomized cats with ‘Ca. M. haemominutum’ does not appear to enhance the pathogenicity of this organism.35

Dogs that develop clinical hemoplasmosis have usually had a history of splenectomy or, less commonly, concurrent immunosuppressive illness or drug treatment or co-infections with other bloodborne pathogens such as Babesia spp. and Ehrlichia canis. Clinical signs include weakness, lethargy, and pallor, and some dogs are inappetent. 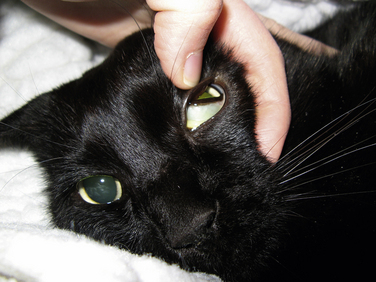 Dogs with hemoplasmosis can show lethargy and mucosal pallor. Fever is usually absent.