Health Care and Management of Working Elephants in Myanmar (Burma)

The conservation of Asian elephants (Elephas maximus) is fraught with numerous challenges.3,12,20 The most serious threats to elephants in Asia are habitat loss, poaching, and conflict with humans.

The global Asian elephant population estimates are 35,000 to 50,000 elephants.22 However, a recent evaluation suggested this estimate is based on a “crude guess” that has been accepted largely unchanged for a quarter century, despite great losses in suitable elephant habitat.3 Currently, Asian elephants are scattered in isolated populations across 13 range states.3,14 Myanmar (Burma) is believed to contain the largest captive elephant population (∼6000)22 and one of the largest wild populations, with 4000 to 6000 free-ranging elephants.3,16 However, more recent discussions among Myanmar elephant experts indicate that estimates for wild elephant populations may be inflated and that free-ranging elephants may now count fewer than 2000.13

Little is known about the health status of, and disease threats to, free-ranging and working elephants in Asia despite recent advances in elephant medicine and care.9 Diseases of great concern for elephant health include elephant endotheliotropic herpesvirus (EEHV)19 and tuberculosis (TB),8 both of which may significantly affect elephants in Asia. However, studies to determine the prevalence of these diseases in Asia are lacking. Prevalence of TB in Asia’s captive and wild elephant populations, as well as in caretaker populations, should be one of the highest priorities because of the importance of this zoonotic disease not only to wildlife, but also to human populations throughout Asia.

A number of publications address elephant health and disease threats associated with working conditions in Myanmar.* To maximize the benefit of these resources, it is critical that epidemiologic data on morbidity and mortality of working and free-ranging elephants in Myanmar be collected and included in a systematic manner. These data will help direct future preventive medicine programs for captive elephants and will warn of disease threats to free-ranging elephants, both of which are necessary to ensure the long-term conservation of elephants in Myanmar.

Elephants have been used in Myanmar for centuries as working animals,12 but their use probably increased dramatically with the large-scale commercialization of forestry after British colonization.21 At the start of the twentieth century the number of working elephants used in the logging industry may have been as high as 10,000.12,17 In addition to their significant economic role in Myanmar, elephants also have a high cultural and historical value. They most likely have generated considerable environmental value, although this is difficult to quantify. At present, Myanmar has some of the most extensive tracts of forest remaining in Asia,14 most likely as a direct result of the use of elephants in the timber industry, rather than more destructive, mechanized logging practices. Thus, the working elephants themselves may be a key to land health, which ensures their free-ranging counterparts have habitat for survival.

There are about 6000 working elephants in Myanmar; about half of these are owned by the Myanma Timber Enterprise (MTE), and half are captive elephants privately owned.23 In captivity, mortality rates are higher than birth rates, and the working population is maintained by supplementing it with elephants captured from the wild.4,15,16 Most working elephants are wild caught, and of the few who are captive born, many are believed to be sired by wild bulls. There is evidence that continued off-take of wild elephants has been reducing the remaining wild populations of Myanmar.15 Captive elephants live and work in Myanmar’s forests close to the remaining wild herds. This intimate contact may exacerbate the threat to wild elephants by increasing the transmission of disease agents between these two populations. The conservation of wild elephants in Myanmar therefore requires significant improvements in the care and management of captive populations. 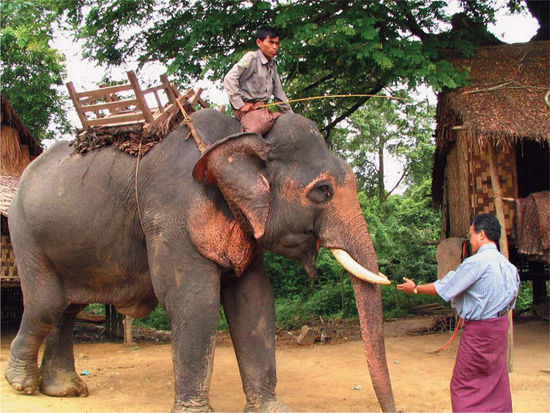 The noninfectious diseases typically encountered by veterinary staff are related to the elephants’ working and living conditions. These diseases include traumatic injuries such as wounds, abscesses, and fractures/sprains; eye lesions; foot problems; and gastrointestinal abnormalities resulting from poor-quality food.1,5,11 Ectoparasites and endoparasites are a common problem for working elephants, sometimes associated with high morbidity and mortality. Infectious diseases, including anthrax, rabies, tetanus, TB, hemorrhagic septicemia, and foot-and-mouth disease, are also of concern for the captive population.1,11

Although veterinary care has been provided to the working elephants for decades, access to veterinary supplies and laboratory capabilities currently are limited in Myanmar. Most veterinary practices are based on the extensive field experience of lead MTE veterinarians, many of whom must rely on outdated published works.6,7,18 It is important now that Myanmar’s veterinarians benefit from the extensive advances made worldwide in elephant care over recent decades. Reciprocally, MTE veterinarians may make important contributions to the care and management of elephants worldwide by sharing their extensive practical knowledge and field skills.

Researchers from the Smithsonian National Zoological Park (SNZP) and MTE veterinarians have collaborated on elephant care and management issues in Myanmar for several years. Recently, we jointly initiated a care and management workshop, including SNZP and MTE staff, to determine important needs for the future care and management of captive elephants. SNZP and MTE also have collaborated on ecologic studies on wild elephants using satellite-tracking technology.13,24 Both these activities have benefited greatly from MTE’s extensive veterinary care program, which covers most of the past century6, 7,11,18 and continues today.

Based on the newly initiated training workshop, we hope to expand to a Working Elephant Health Care and Management Program (WEHCMP) that will comprise researchers from many disciplines, including veterinarians, a reproductive physiologist, a geneticist, and a number of ecologists. This program will be directed at addressing the causes of low birth rate and high morbidity and mortality of the captive elephants. Additionally, the program is designed to gain a better understanding of the link between the captive and wild elephants using health indices, genetic and reproductive assessments, and global positioning system (GPS)–tracking technology.

The overall objectives of this new program are (1) to develop long-term captive population management strategies to reduce morbidity and mortality and increase births in the working timber elephants, (2) to stop the continued off-take of animals from the wild that supplement the captive herds, and (3) to minimize health threats to the wild population. To accomplish these overall objectives, the WEHCMP has six major goals5 (Box 45-1). The following eight steps will be used to achieve these goals:

1. Develop a comprehensive bibliography of all published information on the health and management of Myanmar elephants.
Only gold members can continue reading. Log In or Register to continue