Affected Host Species: Dogs and cats are the definitive hosts for several different Giardia assemblages and pass either trophozoites (diarrhea) or cysts (diarrhea or normal stool) in feces.

Intermediate Hosts: Although there are no intermediate hosts, there are multiple potential transport hosts that may carry Giardia spp. cysts and indirectly infect dogs or cats.

Major Clinical Signs: Most dogs and cats harbor subclinical infections. Acute watery diarrhea that can contain mucus can occur. Steatorrhea can be observed. Chronic or intermittent diarrhea and weight loss may be noted in animals with concurrent infections or immunocompromise.

Human Health Significance: Giardia assemblages that infect dogs (assemblage C and D) or cats (assemblage F) are usually not associated with clinical disease in humans but can be detected in the feces of immunocompromised people. Human assemblages A and B can be found in feces of dogs and cats when animals share human environmental features (such as contaminated water). However, it is unlikely that new human infections with Giardia assemblage A or B infections are acquired from the feces of dogs or cats.

Giardia spp. are protozoans in the flagellate group that have been recognized in the feces of animals and man for many years.3 Giardia spp. occurs in two forms, the trophozoite and the cyst (Figure 79-1). The trophozoite is the active, motile form; it is approximately 15 µm long and 8 µm wide and has a teardrop shape and a ventral adhesive disk (Figure 79-2). Trophozoites are almost never found in normal feces and are susceptible to many environmental conditions; thus, they usually are not associated with transmission among animals. The 12-µm long and 7-µm wide cyst is the environmentally resistant stage primarily responsible for transmission. The cyst contains two incompletely separated but formed trophozoites, the axoneme, fragments of the ventral disks, and as many as four nuclei (Figure 79-3). The cyst can survive several months outside the host in wet and cool conditions but is susceptible to desiccation in dry and hot conditions. 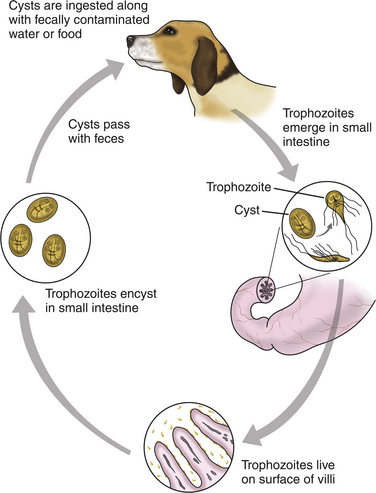 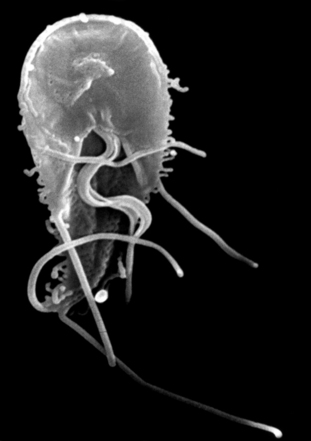 FIGURE 79-2 Electron micrograph of a Giardia trophozoite. (Courtesy of Bayer Animal Health. In Tangtrongsup S, Scorza V. Update on the diagnosis and management of Giardia spp. infections in dogs and cats. Topics in Companion Animal Medicine. 2010;25:155-162.) 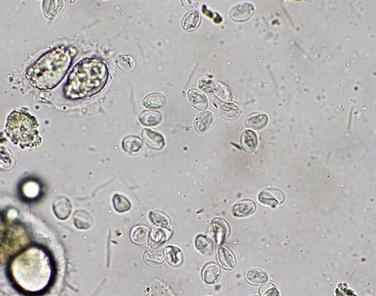 Giardia spp. are transmitted by the direct ingestion of fecal cysts or by indirect ingestion of contaminated water, food, transport hosts, infected prey species, or fomites. The prepatent period (time between ingestion and appearance of cysts in the feces) in cats ranges from 5 to 16 days (mean around 10 days) and in dogs ranges from 4 to 12 days (mean around 8 days). Shedding of Giardia cysts by cats may fluctuate from undetectable to concentrations of more than 1 million cysts/g of feces over periods as short as 2 to 7 days.4 Young dogs shed an average of 2000 cysts per gram of feces; the mean cyst count per gram of feces for all infected dogs (regardless of age) was 706.5 Most infections are self-limited with cessation of cyst shedding in 27 to 35 days in dogs and cats. However, some infected animals shed cysts for several months.

Although there are many Giardia spp., G. duodenalis (syn. G. intestinalis or G. lamblia) is the species that infects people, dogs, and cats.6 Based on genetic analyses, there are at least seven distinct assemblages (A-G) within G. duodenalis. Assemblage A has been amplified from feces of infected humans, dogs, and cats as well as many other mammals. Assemblage B is most commonly amplified from human feces but is occasionally amplified from dog feces. Overall, most dogs are infected with the species-specific assemblages C and D, and cats are infected with assemblage F.6 It has been proposed that these assemblages be recategorized as separate species of Giardia (Table 79-1), but this has not yet been unanimously accepted.7

Proposed and Existing Nomenclature in the Genus Giardia

Giardia infections in cats and dogs have been reported in many prevalence studies, case reports, and treatment studies from around the world. Infection rates vary with the assay used and whether or not diarrhea is occurring. However, in general they are approximately 5% to 20% in dogs and cats.3 In most studies there is no association between the presence of Giardia in the feces and clinical signs, because of the high prevalence of subclinical infections.3,8 Younger or immunosuppressed animals and those living in crowded environments are at the highest risk of showing clinical signs of disease.

After Giardia spp. cysts are ingested by a susceptible host, gastric acid and pancreatic enzyme exposure in the duodenum induces release of the two trophozoites, which mature quickly and attach to the brush border of the villous epithelium by means of their ventral adhesive disk and a number of parasitic surface molecules, including the giardins (alpha, beta, delta, and gamma giardins) and a network of contractile proteins. In dogs, trophozoites are found from the duodenum to the ileum; in cats, they predominate in the jejunum and ileum. Trophozoites multiply by binary fission and then encyst by an unknown mechanism. Contamination of fomites, which can include arthropods and the coats of animals, or food and especially water sources by Giardia cysts is an important mode of transmission, because cysts remain viable for days to weeks in the environment when conditions are cool and moist.

Although the pathogenesis of Giardia is not completely understood, in vitro and in vivo studies suggest it is multifactorial with a combination of intestinal malabsorption and hypersecretion as the primary mechanisms associated with development of diarrhea. The host-parasite interaction leads to the upregulation of genes involved in the apoptotic cascade and in the formation of reactive oxygen species.9 The induction of apoptosis increases gastrointestinal permeability, allowing luminal antigens to activate host immune-dependent pathologic pathways. Giardia also alters epithelial claudin proteins that are components of tight junctions.9 However, Giardia can cause clinical signs in the absence of villous atrophy or other signs of mucosal injury.9 Giardia infection stimulates chloride secretion and results in a diffuse loss of brush border microvillus length, which causes epithelial maldigestion and malabsorption of glucose, sodium, and water and reduced disaccharidase activity. Mild to moderate infiltrates of intraepithelial lymphocytes can be recognized and may be associated with the sodium and glucose malabsorption. Loss of epithelial barrier function may have the potential to lead to chronic intestinal disorders, but the mechanisms remain unclear.9 Mast cell hyperplasia may also contribute to the loss of epithelial barrier function. It is unknown why some people and animals maintain chronic, subclinical infections, but this is likely related to both host and parasite factors.

Although most cats and dogs that shed Giardia do not show clinical signs of disease, Giardia infection can induce illness in some animals. The primary clinical signs of giardiasis include chronic diarrhea and weight loss. The diarrhea is usually mucoid, pale, and soft and has a strong odor; steatorrhea may be present as well.3 The presence of blood in the stool is uncommon unless co-infections with other agents such as Ancylostoma spp., Isospora spp., Tritrichomonas foetus, or Clostridium perfringens occur. Fever or vomiting is almost never recognized in dogs or cats with giardiasis. Co-infections with other agents such as Cryptosporidium spp. or T. foetus may potentiate diarrhea in dogs or cats.10,11 It is currently unknown whether the different assemblages induce different clinical signs in cats and dogs or if there are strains within a given assemblage that are more pathogenic than others.

Abdominal radiographic abnormalities are uncommon and nonspecific and, when present, are suggestive of diffuse enteritis.

Because of the small size of Giardia cysts and the high subclinical infection rate, giardiasis is commonly misdiagnosed, underdiagnosed, or overdiagnosed.3,12 Yeasts are easily mistaken for Giardia, which leads to false-positive fecal flotation results. Giardia cysts are shed intermittently, and repeated fecal analysis may be needed to detect cysts. In addition, cysts can deteriorate in fecal flotation solutions, leading to false-negative results.12 A variety of different Giardia assays have been evaluated for use in cats and dogs (Table 79-2). There is no one test that can be performed on a single fecal specimen that has 100% sensitivity. The following is a discussion of the currently available diagnostic methods.

Diagnostic Assays Available for Giardiasis in Dogs or Cats 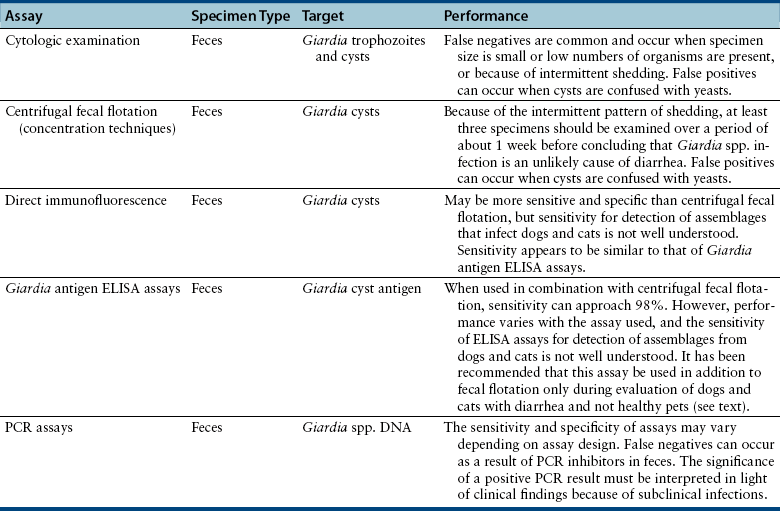 Feces can be evaluated for the presence of Giardia trophozoites by wet mount examination. Approximately 2 mm × 2 mm of fresh diarrheic feces or mucus is mixed with a drop of normal saline solution (warmed to body temperature) on a microscope slide and a coverslip placed. At 100× magnification, trophozoites are recognized by their “falling leaf” motion. Evaluation for structural characteristics is then performed at 400× magnification. Because trophozoites may be associated with mucus, the only visible motility may be the flagella. Although Giardia trophozoites can be confused with tritrichomonads that are similar in size, they can be differentiated from tritrichomonads based on their motility and morphology. In contrast to Giardia spp., tritrichomonads have an undulating membrane and a rolling form of motility, lack a concave surface, and have only a single nucleus (see Chapter 80).3 Further testing of feces for Giardia antigen, Giardia DNA by PCR assay, or fecal culture or PCR assay for Tritrichomonas foetus can be used to differentiate the organisms if cytology is inconclusive. Once Giardia is detected in a direct smear or wet mount based on motility, further cytologic examination with staining should be performed on a fresh specimen. The application of Lugol’s solution, methylene blue, or acid methyl green to the wet mount helps in the visualization of the internal structures of the trophozoites. Trophozoites are rarely found in solid feces.

Giardia cysts are more likely to be detected after fecal concentration techniques. Sheather’s sugar centrifugation and zinc sulfate centrifugation are commonly used. In addition to the identification of Giardia cysts, ova of other common parasites can easily be identified. Giardia cysts can be confused with yeast because of similar size, but Giardia cysts have a distinct structure (see Figure 79-3). Because of the intermittent pattern of shedding, at least three specimens should be examined over a period of about 1 week before ruling out Giardia spp. infection as a cause of diarrhea. If fecal specimens cannot be examined immediately, storage at 4°C for several days is acceptable, but specimens should not be frozen.