Overview of Helicobacter Infections in Dogs and Cats

First Described: 1881 by Rappin (France),1 who observed spiral bacteria in a dog’s stomach; the association between H. pylori infection and disease in humans was made in 1983 by Warren and Marshall (Australia).2

Affected Hosts: Humans and a variety of other animals are colonized by helicobacters; an association with disease is clearest for humans and ferrets

Human Health Significance: Dogs and cats may be a source of human infection with non–H. pylori helicobacters that have been associated with gastritis, gastroduodenal ulceration, and low-grade mucosa-associated lymphoid tissue (MALT) lymphoma in humans.

Helicobacter spp. are flagellate, gram-negative, microaerophilic, curved to spiral-shaped motile bacteria. They are grouped into gastric, hepatic, and intestinal Helicobacter species, with intestinal species residing primarily in the large intestine.3,4 In humans, gastric Helicobacter spp. are an important cause of gastritis and gastroduodenal ulceration and increase the risk for development of gastric adenocarcinoma and lymphoma. In contrast, the extent to which Helicobacter spp. cause disease in dogs and cats is not fully understood, and newly discovered organisms in dogs and cats have drawn most attention in regard to their zoonotic potential.5

Helicobacter pylori, the type organism, is the most important species infecting humans. H. pylori infection is extremely rare in cats and has only been identified in one colony of cats to date.6 It has not been described in dogs. Dogs and cats are generally infected with gastric non–H. pylori helicobacters (also referred to as gastric helicobacter–like organisms, or GHLOs).5 These are much larger than H. pylori (5 to 10 µm long versus 1.5 to 3 µm long for H. pylori), and species cannot be differentiated from one another based on their light or electron microscopic appearance alone (Figure 49-1). The nomenclature of non–H. pylori helicobacters is complicated. Species identified in dogs and cats are listed in Table 49-1.4,7–16 Before their genetic characterization, non–H. pylori helicobacters were originally referred to as “Gastrospirillum hominis” and later “Helicobacter heilmannii.” Subsequent analysis of multiple gene sequences from a variety of “H. heilmannii” from dogs and cats has revealed that “H. heilmannii” is not one but a group of organisms that includes H. felis, H. bizzozeronii, H. salomonis, and an organism that has been confusingly named H. heilmannii. These organisms have also been implicated in human disease, albeit less commonly than H. pylori.5 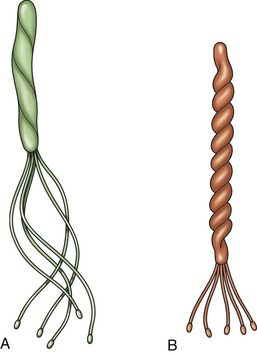 Depending on the study, between 60% and 100% of dogs and cats carry non–H. pylori helicobacters, and gastric Helicobacter spp. can be found in apparently healthy animals and dogs and cats without signs of vomiting.5,17–22 H. felis infection has been associated with gastric pathology in dogs in some studies23 but not others.24 Dogs and cats are probably colonized shortly after birth, as a result of fecal-oral and oral-oral transmission.25 Transmission through contact with vomitus may also occur. Water-borne transmission may play a role in spread of H. pylori to humans.26 Shelter and colony dogs and cats may have a higher prevalence of colonization, most likely due to the close proximity of animals to one another. One Helicobacter species may be able to suppress the presence of another, so that dogs and cats are primarily colonized with a single species, although in some animals, the simultaneous presence of multiple species has been found.27–30 The organisms have a remarkable ability to survive the low pH of the stomach, which they resist by living deep in the mucus glands of the stomach and through production of the enzyme urease. The urease catalyzes the hydrolysis of urea to carbon dioxide and ammonia, which raises the pH of the organism’s milieu. In dogs and cats, the organisms are also found within the canaliculi and the cytoplasm of parietal cells.25,30,31

The majority of dogs and cats infected with Helicobacter spp. show no clinical signs. Helicobacter infection of some dogs and cats has been hypothesized to cause chronic intermittent vomiting, inappetence, pica, belching, weight loss, fever, and polyphagia.31 Unfortunately, strong evidence that supports an association with such disease in dogs and cats is lacking. Clinical signs in some animals with biopsy-confirmed infection resolve following specific therapy for gastric helicobacter infection,31–33 although the results of one study were difficult to interpret because an elimination diet was administered concurrently.31 Experimental and natural infection of dogs and cats with non–H. pylori helicobacters has been associated with chronic lymphoplasmacytic gastritis and lymphoid follicular hyperplasia. Gastroduodenal ulceration and marked alterations in the gastric acid secretory axis, as occur in humans, have not been observed in dogs and cats.24,33,34 However, not all animals infected with non–H. pylori helicobacters have histopathologic evidence of gastritis, and no correlation has been observed between the severity of gastric pathology and the degree of colonization by helicobacters. More severe gastritis with marked lymphoid follicular hyperplasia and neutrophilic inflammatory infiltrates has been reported in cats and acutely in puppies experimentally infected with H. pylori.35,36 The puppies developed gastrointestinal signs, including vomiting and loose stool, shortly after inoculation. It is possible that the degree of bacterial invasion and gastritis in dogs and cats varies with the infecting Helicobacter species or even strain.30 In humans, gastric pathology has been associated with possession of a number of pathogenicity genes by H. pylori, including cagA (cytotoxin-associated gene A), vacA (vacuolating cytotoxin), and iceA (induced by contact with epithelium).37 The degree of vacuolating cytotoxin production can also vary among strains.38

Non–H. pylori helicobacters have been detected in the hepatobiliary system of cats with neutrophilic cholangitis41 and lymphocytic cholangitis,42 although this may reflect ascending bacterial infection secondary to an underlying disease process. H. canis was detected in the liver of a 2-month-old puppy with multifocal necrotizing hepatitis that had acute weakness and vomiting, and died within hours.43 H. canis was also detected in a colony of Bengal cats with diarrhea, but its role as a causative agent was uncertain.44 Abundant organisms that genetically resembled H. canis were detected microscopically throughout the large intestine of a 2-month-old kitten with severe diarrhea, vomiting, dehydration, weight loss, and inappetence.3 In one study, the presence of heavy colonic infection with enterohepatic Helicobacter spp. infection in a group of laboratory dogs was associated with the presence of mucosal atrophy and fibrosis, and a possible role of Helicobacter spp. infection in canine inflammatory bowel disease was suggested.29

Clinical diagnosis of Helicobacter infection in dogs and cats has most commonly been based on histopathology, cytology, rapid urease testing, and, to a lesser extent, PCR on gastric biopsies (Table 49-2). Other tests such as the urea breath and blood tests, fecal PCR, and serologic tests are primarily used in human patients and in the research arena. 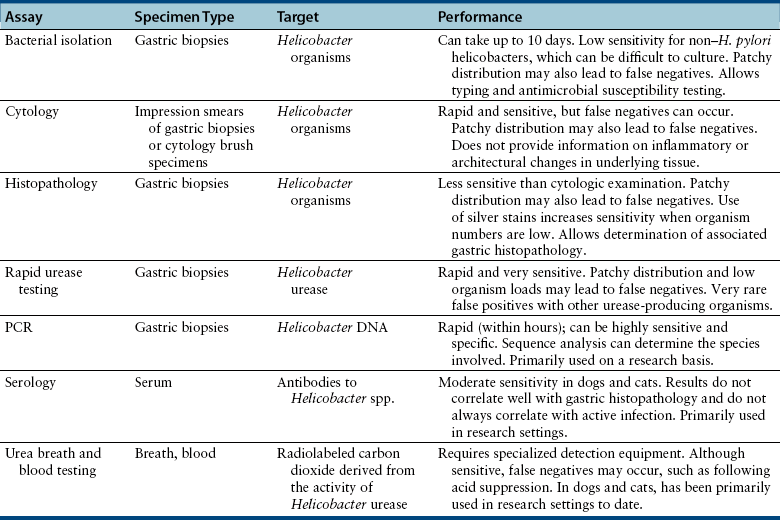 ∗For all tests, positive results do not imply that Helicobacter is the cause of disease.

Spiral organisms can be readily detected in touch impression smears of gastric tissue obtained following biopsy or necropsy, after staining with Gram or Diff Quik stains (Figure 49-2). A cytology brush can also be used to obtain a specimen during endoscopy. Several biopsies or brush specimens may need to be evaluated from different regions of the stomach (fundus, cardia, antrum/pylorus) when the distribution of organisms is patchy. When organism burdens are high, the organisms can be detected using histopathology, which allows assessment of concurrent gastric pathology (Figures 49-3 and 49-4). The use of silver stains (such as Warthin-Starry stain or Steiner stain), Giemsa, or toluidine blue stain, as well as immunostaining, dramatically increases sensitivity for organism detection (see Figures 49-3, C, and 49-4, C).45 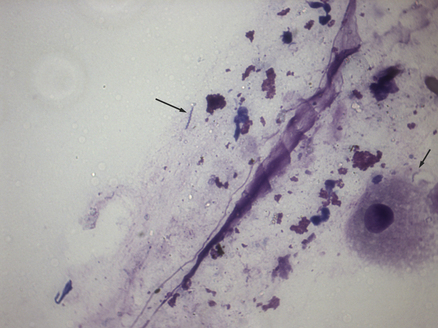 FIGURE 49-2 Spiral-shaped gastric Helicobacter-like organisms visible in a Diff Quik–stained smear (arrows) of a gastric biopsy from a 2-year-old male neutered Cavalier King Charles spaniel with chronic vomiting and regurgitation for which no other cause was apparent (1000× magnification).

Isolation of gastric helicobacters is difficult and has low sensitivity. Growth typically requires incubation on selective media in microaerobic conditions for 5 to 10 days. Isolation is advantageous in research settings because it allows subsequent identification of the organism using conventional biochemical testing, whole-cell protein profiling, and DNA analysis.21,46 It also allows antimicrobial susceptibility testing, which has recently been recommended before treating humans for H. pylori infection because of the increasing prevalence of antimicrobial resistance.47 Resistance to antimicrobials has also been documented in non–H. pylori helicobacters isolated from dogs and cats.48

The rapid urease test involves incubating a gastric biopsy in a urea broth that contains the pH indicator phenol red. If gastric helicobacters are present, helicobacter urease breaks down the urea; with the release of ammonia, a rise in pH and a color change occur. The change in color can occur within 1 to 3 hours, although the broth is generally incubated at room temperature for 24 hours. The test is very sensitive, but false-negative results can occur if the distribution within the stomach is patchy or if organism loads are low. False-positive results have rarely been reported when other urease-producing bacteria are present in the stomach, such as Proteus spp.