Prevalence in the United States

Heartworm infection is less common in cats than in dogs, with the feline prevalence approximating 5% to 20% of the canine prevalence in a given geographic area (Ryan et al, 1996). The result has been a low index of suspicion for feline heartworm disease (FHWD), with consequent underdiagnosis. In addition, the diagnosis of FHWD often is obscured because (1) cats are frequently amicrofilaremic; (2) serologic tests (specifically, the enzyme-linked immunosorbent assay [ELISA] antigen and antibody tests) have lacked sensitivity or specificity in cats; (3) worm burdens are small; (4) aberrant sites are more common than in dogs; (5) clinical signs are often nonspecific and different from those seen in dogs; and (6) FHWD can be mistaken easily for feline bronchial disease (asthma) and clinical signs often improve with similar therapies. For these reasons, despite recent efforts at defining the scope of this problem in cats, the exact prevalence of FHWD is unknown and likely underestimated. Moreover, fewer than 5% of cats in the United States receive monthly heartworm preventive medication.

The greatest numbers of cases of feline heartworm infection (FHWI) have been reported from the southeastern United States, the Eastern Seaboard, the Gulf Coast, and the Mississippi River valley (Ryan and Newcomb, 1996). Prevalence studies have focused mainly on cats in shelters (Figure 183-1). Although the shelter population provides a very specific diagnosis by postmortem examination, such studies are not necessarily applicable to pet cats, even in the same geographic region. These studies have revealed a prevalence of FHWI ranging from 0% to 14% (see Figure 183-1). There are limited data for pet cats, but a study performed in cats brought to the teaching hospitals of North Carolina State University and Texas A&M University for evaluation of cardiorespiratory signs demonstrated a mature infection prevalence of 9% and an “exposure” rate of 26%; the latter figure is based on antibody titers (Atkins et al, 1998). Serologic surveys, performed primarily in asymptomatic cats, have found positive antibody test results in 5% to 33% of cats, even in areas where heartworm is not considered heavily endemic. Among cats exhibiting respiratory and gastrointestinal signs, positive antibody test results have been found in as many as 44% of cats (Robertson-Plough et al, 1998). The largest survey to date found a nationwide exposure rate of nearly 12% (Figure 183-2) in over 2000 largely asymptomatic cats from areas not considered to be highly endemic for heartworm infection (Miller et al, 1998). In this author’s opinion, heartworm infection should be considered a risk for cats in any locale in which dogs are considered at risk. 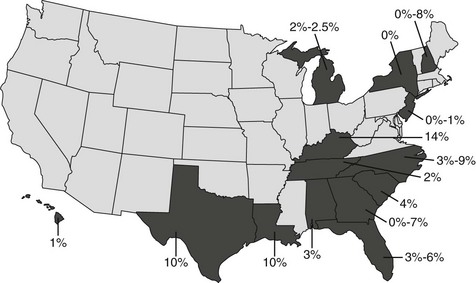 Figure 183-1 Prevalence of necropsy-proven heartworm infection in shelter cats. The shaded states are those in which such studies have been completed. One Michigan study, which showed a prevalence of 2%, was an antigen study. 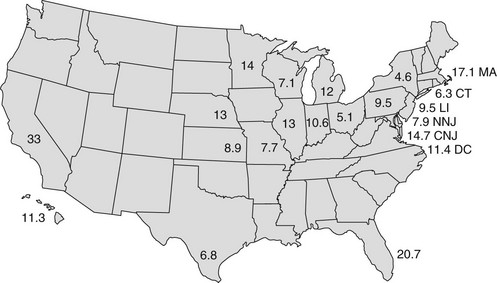 The diagnosis of FHWI or FHWD poses a unique and problematic set of issues. The clinical signs in cats often are different from those in dogs and the index of suspicion still is generally low. Furthermore, the diagnosis often is elusive because eosinophilia is transient or absent and most cats are amicrofilaremic. Radiography, although helpful, is neither adequately sensitive nor specific, requires expertise in interpretation, and is excessively expensive as a screening tool. Echocardiography shows promise in terms of specificity and sensitivity for mature infection, but is costly, requires special equipment and expertise, and is useless in cases of immature infection. Currently the most useful tests are the ELISA serologic tests, but these too are imperfect. The antigen test is very specific but is inadequately sensitive, missing 30% to 50% of natural infections (McCall et al, 1995). On the other hand, the laboratory feline antibody test is very sensitive for exposure (i.e., at least transient infection, with abortion of infection at larval or young adult stages), but its specificity is low for mature infection, which means that a positive test result does not necessarily indicate adult infection (McCall et al, 1995, 1998). In fact, the great majority of antibody-positive cats do not have mature FHWI. The two ELISA tests are often used in combination or in sequence. In the latter instance, the antibody test is done first; if results are positive, the antigen test is then performed. Unfortunately, cats with mature infections commonly are antibody positive and antigen negative; however, cats with positive results on antigen or microfilariae tests are presumed always to harbor adult infections.

Although no breeds of cats have been shown to be at increased risk of FHWI, most authors do suspect a male predisposition. This suspicion is based on the overall preponderance of males among cats diagnosed with FHWI (71%; Ryan et al, 1996) and the greater experimental infection rate in males than in females (McTier et al, 1993). However, the experience at North Carolina State University suggests that, although more males (61%) than females are diagnosed with FHWI, the male : female ratio is not significantly different from that of the general population of cats seen at a teaching hospital (53% male; Atkins et al, 2000). Indeed, the higher proportion of male cats with FHWI is comparable to that in the population of cats brought for treatment of cardiorespiratory signs (60% male; Atkins et al, 1997). The typical cat with FHWI is 4 to 6 years of age, but the age at presentation varies widely (range, <1 to 19 years). A history of outdoor exposure predicts a heightened risk of heartworm exposure (Miller et al, 1998). Nevertheless, over one fourth of heartworm-infected cats are reported by their owners to be housed totally indoors (Atkins et al, 2000). This may mean that indoor cats can be infected, that owners misinterpret the question when asked, or both. Although some have suggested a seasonal trend (August to December) for diagnosis of FHWD (Guerrero et al, 1992), other studies do not support this contention (Atkins et al, 2000).

Findings in chronic FHWD may include cough, dyspnea, anorexia, weight loss, lethargy, exercise intolerance, vomiting, and signs of right-sided heart failure. Cough is a relatively consistent finding (>50% of cases, compared with 15% in cats with cardiorespiratory signs but no FHWI). When cough is noted in cats from endemic areas, the suspicion of FHWD should increase. Likewise, dyspnea, although less specific than cough, is present in 40% to 60% of cases. The pulmonary response to in situ heartworms in cats includes type II pneumocyte hyperplasia and activation of pulmonary intravascular macrophages. The latter response, not recognized in dogs, may explain the asthma-like syndrome recognized in some cats, even after they have been cleared of Dirofilaria immitis (Dillon et al, 1996).

Recent research involving experimental and natural infections suggests that even infections that fail to mature can produce disease, affecting lung parenchyma, airways, and pulmonary arteries with inflammatory and proliferative lesions. It is believed that the death of immature final-stage heartworms in the lung incites the inflammatory and proliferative lesions. The exact importance of this so-called heartworm-associated respiratory disease, or HARD (Blagburn and Dillon, 2007), is unclear because experimental infections that produced these lesions were heavy. Nevertheless, Browne and colleagues in 2005 reported that 50% of shelter cats thought to have been exposed without a mature infection had characteristic proliferative and obstructive pulmonary arterial lesions. There is diagnostic importance to this finding because even transient heartworm infection can produce disease, with clinical signs of wheezing and coughing but negative findings on an antigen test and echocardiogram. However, the antibody test results and thoracic radiographic findings in such cases typically are positive. A comparison of HARD and mature heartworm disease is provided in Table 183-1 (Lee and Atkins, 2010). Somewhat speculatively, if one assumes that 20% of cats in Florida are antibody positive (see Figure 183-2), that 5% have adult infections (see Figure 183-1), and that 50% of cats with HARD show clinical signs (Browne et al, 2005), then 12.5% of the cats in Florida experience at least transient heartworm disease. Finally, it has been suggested, although not proven, that HARD may lead to inflammatory airway disease (“asthma”) that persists well beyond the time at which young adult heartworm infections are cleared.

Physical examination is often unrewarding, although a murmur, a gallop, or diminished or adventitial lung sounds may be noted. In addition, cats may be thin or demonstrate dyspnea. If heart failure is present, elevated heart rate, jugular venous distention, pleural effusion (often chylous), and occasionally ascites are detected.