The family Felidae consists of at least 36 wild cat species. These felids are morphologically similar with rounded, flat faces, facial whiskers, large eyes, and large ears. They have the widest range of body sizes of all living carnivore families, weighing 1 kilogram (kg) to 300 kg. They occupy diverse habitats and are distributed naturally throughout the world except Antarctica and Australia, where they have been introduced by humans.

Felid taxonomy has been intensively studied and yet remains controversial. The number of genera recognized is variable. Although in the past four genera were lumped together, currently at least 12 genera are recognized based on several studies of morphology and genetics.31 Taxonomy and biostatistics for felids may be found in Table 47-1. 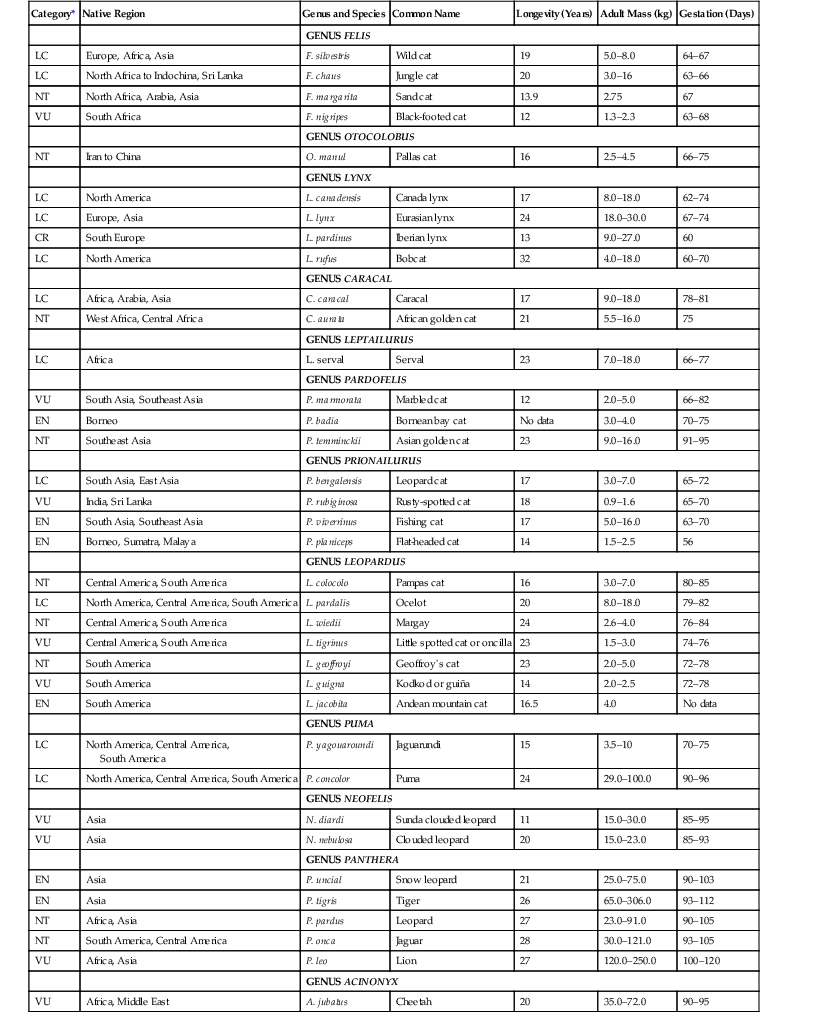 Wild felids are predators requiring large areas of habitat with suitable prey density. Human population growth has negatively impacted both these requirements, resulting in a decline in all felid species worldwide in range and number. Felidae are among the most threatened groups of mammals. Larger species are heavily persecuted because of the danger they pose to humans and livestock. Small cat species are also persecuted and are harvested for the fur trade. The International Union for the Conservation of Nature (IUCN) Red List designates 29 of 36 wild felid species as having a decreasing population trend. Nearly 50% of all felid species are listed in the top three threatened categories, and seven of these species are listed as Critically Endangered or Endangered. Felids characterized as threatened are those that appear to be naturally rare with limited distribution or those that have become threatened because of human factors. The Iberian lynx, listed as Critically Endangered, fits into both categories and may become the first cat species to become extinct in modern times.23,31

The anatomy of nondomestic felids is similar to that of the domestic cat. Sexual dimorphism is limited with males generally 5% to 10% larger than females. There are 28 or 30 teeth with the following dental formula: incisors (I) 3/3, canines (C) 1/1, premolars (P) 2-3/2, molars (M) 1/1. The incisors are small and are used for nipping flesh from carcasses. Canines are long with a length-wise groove in the enamel and are used to kill prey. The fourth upper premolars (carnassial teeth) are used to slice meat. The reduced dentition allows for a reduced length of the skull and mandibles, which improves efficiency of the muscles that close the jaw. Cats have a more powerful bite relative to muscle mass than any other carnivore except mustelids. Because of their carnivorous diet, cats have a shorter digestive tract with a smaller cecum and a short large intestine.31

The forelimbs are used for locomotion and prey capture. To grasp prey, supination of the paw is needed. This increased mobility of the elbow and wrist joints affects running. Canids run faster as they have stiffer forelimbs. The hindlimbs are the propulsers, and the reduction or loss of a clavicle increases stride length. Cats are digitigrade, with five toes in the front and four in the back. The first digit on the front foot is the dewclaw. All felids have retractable claws, the exception being the cheetah, in which retraction is less developed. Cheetahs lack the fleshy sheath protecting the claw.31

A key characteristic that was used to separate the big cats (Pantherinae) from the small cats (Felinae) is the presence of an elastic ligament in the hyoid apparatus below the tongue, which was thought to allow the big cats to roar but not purr. Conversely, the bony hyoid of the small cats was thought to allow them to purr but not roar. More recent studies comparing the hyoid structure and vocal abilities dispute this correlation. It has been found that the main difference between the roaring, nonpurring cats and the others was the presence of long, fleshy, elastic vocal folds within the larynx of big cats that resonate to produce a roar. Smaller cats and cheetahs have simpler vocal folds that only allow purring.31

Nondomestic felids appear to have an AB blood group system similar to that described in domestic cats. Cross-matching of donor and recipients using standard techniques is important before the administration of transfusions or blood products.36

Minimum husbandry guidelines for keeping small (weighing less than 10 kg) and large felids in captivity are available through the Association of Zoos and Aquariums (AZA, www.aza.org) and include recommendations on minimum size specifications, barrier height and width, temperature, humidity, lighting, ventilation, interindividual distances, and sanitation. Additional enclosure features recommended may vary by species and include a vertical component, elevated resting platforms, a heat source, shade, logs or wooden posts to sharpen claws, a visual barrier for cats to hide behind, a den or secure area, varied topography, water features for bathing and swimming, and a shift or secondary holding area to safely move animals from their primary enclosure for cleaning, feeding, or medical procedures. To reduce the incidence of osteoarthritis and pad ulceration, large felids should not be housed for long periods on concrete. Natural substrates or platforms with some flexibility that may be cleaned and disinfected should be provided.36

Appropriate safety precautions must be designed into the enclosure and holding facilities to ensure employee and guest safety. These include, but are not limited to, using materials of sufficient strength, covering all openings with mesh or heavy glass, and ability to view all the cats within an enclosure from a safe position. Safety gates provide secondary containment if an animal escapes from the primary holding area. Flares, fire extinguishers, and sound generators may be placed throughout the work area to deter attacks. Keepers may be required to carry pepper spray and communication radios while working with large felids. Escape drills should be held routinely.36

The diet of wild felids varies, depending on their sizes. The large cats such as lions and tigers prey on very large mammals, with only two to three species making up the bulk of their diet. Medium-sized felids such as the puma, the snow leopard, and the leopard eat smaller prey but a larger number of different species. The small felids prey on mammals, birds, reptiles, amphibians, and insects. All wild cats hunt and kill their own prey, but some will scavenge opportunistically.31

Felids require a much higher proportion of protein in their diet compared with any other mammal, 12% for domestic cats compared with 4% for domestic dogs.31 In captivity, a formal nutrition program is recommended to meet the nutritional and behavioral needs of all species. Diets should be developed on the basis of the recommendations of nutritionists such as the European Association of Zoos and Aquaria (EAZA) Nutrition Group or the Association of Zoos and Aquarium (AZA) Nutrition Advisory Group (NAG). The AZA-NAG feeding program guidelines suggest a feeding strategy that includes providing a diet that is nutritionally balanced, that reasonably stimulates natural feeding behaviors, that the animal consumes consistently, and that meets the above criteria and is practical and economical to feed. Domestic cats generally require 80 to 90 kilocalories per kilogram of body weight (BW) per day (kcal/kg/day) to meet metabolic requirements. Diet quantity needs to be altered on the basis of the animal’s body condition, life stage, and environmental factors. Amounts of feed may also be based on the National Research Council recommendation of 55 to 260 kcal/BW0.75 (Requirements for Domestic Dogs and Cats, National Research Council [NRC], 2006).

Most captive felids are fed commercial meat-based complete diets, so additional vitamin or mineral supplements, including calcium and taurine, should not be necessary. Techniques for proper thawing of frozen diets prior to feeding may be found in the U.S. Department of Agriculture (USDA) guidelines on handling of frozen and thawed meat and prey items fed to captive exotic animals (www.nal.usda.gov/awic/pubs/meatprey.pdf). Commercial diets may be supplemented with good-quality carcasses or whole-prey items. If muscle meats or organ meats make up the bulk of the diet, additional supplementation, including calcium, may be necessary. The majority of felids are able to handle the large concentrations of microorganisms present in raw meat. However, guidelines of appropriate bacterial concentrations in received commercial products need to be established for each institution, and commercial products should be tested on a regular basis. Bones may be offered to some species on fast days or twice weekly to promote oral health and to provide enrichment. Fresh water should be made available at all times.

The diet should be analyzed routinely for nutritional content, bacterial contamination, and the presence of foreign material. Several cases of ethylene glycol toxicity from contaminated meat have been reported. The source of the diet components also should be investigated to prevent the transmission of diseases such as spongiform encephalopathies.36

Many felids, particularly cheetahs, leopards, lions, and tigers, may be trained to cooperate with veterinary procedures. Behaviors that are particularly helpful include shifting into transport crates, obtaining regular body weights, close visual inspection and oral examination, measurement of temperature, heart rate, and blood pressure, administration of injections or other medications, positioning for abdominal ultrasonography for pregnancy monitoring, and collecting blood or other biologic samples.

Felids less than 10 to 15 kg in body mass may be restrained safely in a net for short procedures such as administration of injections. Heavy gloves may be used, but most felids are capable of biting through them. The majority of cats are darted or confined to a small area or restraint device and hand injected. Commercial squeeze cages are available for restraining and transporting larger felids and work best when incorporated into holding facilities (LGL Animal Care Products, Inc., Bryan, TX; Research Equipment Company, Bryan, TX).36

A variety of drug combinations have been used safely to induce anesthesia in felids (Table 47-2). In general, smaller species require a higher dosage of anesthetics compared with larger species on the basis of kilogram of body weight, and free-living individuals may require higher dosages compared with their captive counterparts. The drug combinations most often used include a dissociative (ketamine or tiletamine), and an α2-agonist (xylazine, medetomidine, or dexmedetomidine), benzodiazepine (diazepam, zolazepam, or midazolam), opioid (butorphanol), or a combination of these. These drugs may be antagonized with yohimbine (0.04 to 0.3 milligram per kilogram [mg/kg], intramuscularly [IM] or intravenously [IV; slow]), atipamezole (0.1 to 0.45 mg/kg, IM), naltrexone (0.05–0.25 mg/kg, IM or IV), and flumazenil (0.01–0.02 mg/kg, IV or IM). Tiletamine and zolazepam (Telazol, Fort Dodge, Fort Dodge, IA) may be used safely in many felids but should be used with caution in tigers. Adverse reactions, including death and neurologic disease (seizures, ataxia), have been anecdotally reported; but controlled studies are lacking. Regurgitation or vomiting during induction or recovery may occur when α2-agonists are used. Food should be withheld from adult felids for 12 to 24 hours and water for several hours prior to anesthesia to decrease the chances of regurgitation and aspiration during induction and recovery. Species-specific protocols have been reported.5,10,18,28,29,38

Not recommended if used alone, best for supplementation or maintenance of anesthesia

Supplements may be needed after 45–50 minutes

Use in small felids or debilitated cats

Flumazenil may not be necessary

Use in small felids or debilitated cats

Not recommended for healthy large felids

Flumazenil may not be necessary