Cause: Escherichia coli (gram-negative rods that belong to the Enterobacteriaceae)

Affected Hosts: Humans and a large variety of animals

Human Health Significance: Dogs and cats may be a source of human infection with some E. coli serotypes.

Escherichia coli are pleomorphic gram-negative, non–spore-forming rods that belong to the family Enterobacteriaceae. Like Salmonella, E. coli can survive long periods of time in feces, dust, and water. They are part of the normal flora of the gastrointestinal tract but can be associated with enterocolitis in the presence of bacterial virulence factors and impaired local or systemic immunity. As with Salmonella infections, E. coli infections can be transferred between animal species and some may be zoonotic; many infections are food borne.

There are more than 170 serogroups of E. coli based on the identity of the bacterial O (somatic) antigen, the sugar that is on the most external portion of the bacterial lipopolysaccharide (LPS) (see Chapter 36). Organisms are also identified on the basis of their H (flagellar) antigens—for example, O157:H7 E. coli. Both the bacterial LPS (endotoxin) and the flagellar antigens are bacterial virulence factors. Other virulence factors in E. coli include adhesins, bacterial exotoxins such as cytotoxic necrotizing factor (CNF), hemolysins, heat-labile (LT) and heat-stable (ST) enterotoxins, and the capsular polysaccharide (K).

E. coli strains that cause gastrointestinal disease have been divided into seven distinct pathogenic categories (pathovars). Each pathovar is defined by a characteristic set of virulence factors that act in concert to determine the clinical, pathologic, and epidemiologic features of the disease they cause. The seven pathovars include enteropathogenic E. coli (EPEC), enterotoxigenic E. coli (ETEC), enterohemorrhagic E. coli (EHEC), necrotoxigenic E. coli (NTEC), enteroinvasive E. coli (EIEC), enteroaggregative E. coli (EAEC), and adherent-invasive E. coli (AIEC) (Table 46-1). Currently, the epidemiology of many of these strains and their role in disease causation is not well defined in small animals, with most work having been done in humans and farm animal species. Many strains have been isolated from both nondiarrheic and diarrheic dogs and cats. An association between EPEC and EHEC (including H7:O157) infection and diarrhea in dogs has been detected.2,3 In addition, AIEC strains have been well associated with granulomatous colitis in boxer dogs.4

Pathogenic Strains of Escherichia coli That Cause Enterocolitis 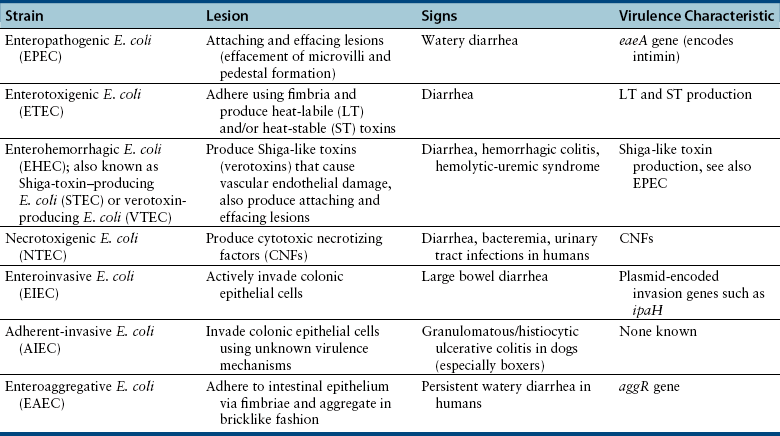 EPEC strains carry the eaeA gene on their chromosome (E. coli attaching effacing), which is located in a “pathogenicity island” referred to as LEE (locus of enterocyte effacement). The eaeA gene encodes a 94-kDa protein, intimin, which allows the organism to adhere intimately to intestinal epithelial cells. This leads to local effacement of the microvilli and formation of numerous, actin-rich pedestals on which the bacteria reside (Figure 46-1).5 The bacteria secrete their own receptor, the Tir receptor, and Tir-intimin interactions are involved in pedestal formation. The pedestals may help the bacteria to remain extracellular, and thus escape immune recognition by the host. The resulting characteristic histopathologic lesions on enterocytes have been referred to as “attaching and effacing lesions.” Subsequent signal transduction events induced by EPEC may be associated with loss of tight junction integrity and altered electrolyte transport, with associated watery diarrhea. The EPEC pathovar does not produce Shiga toxin, Shiga-like toxin, or verotoxins. EPEC serotypes that have been associated with diarrhea in humans have been identified in dogs and cats.6,7

ETEC are a major cause of diarrhea in human infants in developing countries and are the agents most frequently responsive for traveler’s diarrhea. ETEC pathovars have been associated with up to 31% of cases of canine diarrhea, particularly in young dogs.8-10 Most of the canine ETEC strains express ST enterotoxin, whereas ETEC strains that produce LT enterotoxin are rarely found. The bacteria adhere to the proximal small intestinal mucosa and produce plasmid-encoded LT and ST enterotoxins. LT is related to cholera toxin and is taken up by enterocytes. Once within intestinal epithelial cells, it activates adenylate cyclase, which leads to increased concentrations of intracellular cyclic AMP with resultant secretion of electrolytes and water that lead to diarrhea, hypovolemia, and metabolic acidosis. LT may also downregulate innate host immune responses and promote ETEC adherence. In contrast, ST binds to the extracellular domain of guanylyl cyclase C, which leads to accumulation of intracellular cyclic GMP and ultimately secretion of chloride and decreased absorption of NaCl, with resultant osmotic diarrhea. Two different ST enterotoxins have been identified, STa and STb. ST-producing ETEC have been detected in young dogs with diarrhea.8–10

In addition to producing attaching and effacing lesions similar to those created by EPEC, EHEC (Shiga-toxin–producing E. coli, or STEC) produce Shiga-like toxins (also known as verotoxins). They cause diarrhea, hemorrhagic colitis, and hemolytic-uremic syndrome (HUS) (e.g., E. coli strain O157:H7). Shiga-like toxins are absorbed from the intestinal lumen and cause vascular endothelial damage, which may lead to a multiorgan thrombotic process in the absence of bacteremia. EHEC can also produce other toxins that contribute to the pathogenesis of the disease. HUS in humans is characterized by renal failure, widespread microthrombotic damage to a variety of organs, hemolytic anemia, and sometimes diarrhea. Similar syndromes have been described in dogs, but an associated E. coli infection was not demonstrated.11,12 HUS has been reproduced experimentally in dogs with a non-O157:H7 E. coli serotype.13 Based on the similarity of renal lesions to those described in HUS, and the practice of feeding predominantly raw meat diets to greyhounds, it has been hypothesized that cutaneous and renal glomerular vasculopathy of greyhounds (also known as “Alabama rot” or “Greenetrack disease”) may result from infection with EHEC strains such as O157:H7.14 A similar condition was described in a great Dane from Germany.15 Some dogs develop cutaneous lesions in the absence of renal failure; other dogs develop renal failure before the onset of cutaneous lesions.

NTEC produce two toxins: CNF and cytolethal distending toxin. Multiple CNF types have been identified (CNF1, CNF2, and CNF3). NTEC have been associated with diarrhea, bacteremia, and urinary tract infections in human patients, as well as with diarrhea in dogs.16

EIEC actively invade colonic epithelial cells. This, together with the associated inflammatory response, leads to hemorrhagic, large bowel diarrhea. In human patients, the EIEC pathovar is uncommonly detected compared with EPEC and ETEC. AIEC, which lack the virulence genes that identify EIEC, have been associated with granulomatous colitis in boxer dogs and infrequently in the French bulldog and Border collie. This infection typically affects young adult boxer dogs that show signs of severe colitis, with colonic thickening and ulceration, and weight loss that is often marked.4,17 It has been suggested that a heritable anomaly in boxer dogs predisposes them to the infection, given the marked breed predisposition for the disease.18

The EAEC pathovar is considered an emerging pathogen in human patients. It adheres to epithelial cells of the terminal ileum and colon using fimbriae in a characteristic “stacked brick” pattern. Expression of these fimbriae is encoded by a plasmid gene known as aggR. Bacterial aggregation is followed by damage and a subsequent inflammatory response, which leads to development of persistent watery diarrhea. Occasionally, EAEC strains also produce toxins, such as verocytotoxin.19 Their role in dogs and cats requires further investigation.

Physical examination may reveal dehydration and abdominal pain in puppies with E. coli diarrhea. Dogs with HUS have had cutaneous erythema and well-demarcated, multifocal cutaneous ulcers of the limbs. Fever and peripheral edema have also been described. Boxer dogs with granulomatous colitis may have poor body condition. A thickened and irregular rectal wall may be detected on rectal palpation, and the feces may contain fresh blood and mucus.

Diagnosis of intestinal E. coli infections, with the exception of granulomatous colitis of boxer dogs, is difficult or impossible with currently available diagnostic assays, because of the fact that healthy dogs and cats shed E. coli, and it is a combination of bacterial virulence factors and host immune competence that contributes to the development of clinical signs. This section therefore focuses primarily on the more specific clinical syndromes caused by EHEC and AIEC.

CBC changes in dogs with E. coli diarrhea are generally mild and nonspecific. Leukocytosis may be present. Dogs infected with EHEC may be thrombocytopenic and have evidence of microangiopathic hemolysis. Microcytic anemia may be present in boxer dogs with granulomatous colitis.