First Described: 1978 (C. difficile, causative role in pseudomembranous colitis in humans)1; 1892 (C. perfringens, by Nuttall and Welch).2 Evidence for a role of C. perfringens in food-borne illness was gathered over 50 years later.3

Affected Hosts: Humans and a variety of other animals

Primary Mode of Transmission: Fecal-oral; disease can result from toxin production by organisms resident in the gastrointestinal tract

Human Health Significance: Dogs and cats have the potential to be a source of human infection with C. difficile, because they can harbor strains (ribotypes) that have been detected in humans. The role of dogs and cats as a source of C. perfringens infection is poorly understood.

Clostridium difficile and Clostridium perfringens are gram-positive, spore-forming, obligately anaerobic rods that are capable of toxin production. Clostridial spores are spherical to oval and distend the bacterial cells when they form within them (Figure 48-1). Clostridium species are found in soil and the intestinal tracts of a variety of different animal species, including those of healthy dogs and cats. Their spores are very resistant to disinfection and can persist in the environment, including within hospitals, for years. Despite their similarities, many differences exist between C. difficile and C. perfringens that relate to epidemiology, interpretation of diagnostic test results, and treatment. 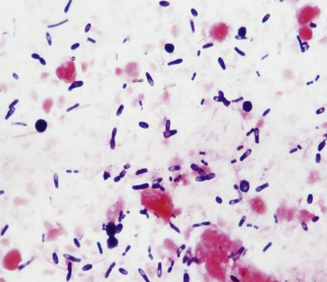 C. difficile is the most common cause of hospital and antimicrobial-associated diarrhea in humans and has also been associated with nosocomial diarrhea in dogs and cats in veterinary hospitals.4,5 In one study, living with an immunocompromised human was a risk factor for C. difficile infection in dogs, but strains present in dogs differed from those in the household environment.6 Dogs that visit human health care facilities are also at risk of acquiring C. difficile infections.7 The emergence of “hypervirulent” C. difficile strains in people has resulted in an increased incidence of disease, increased mortality rates, increased relapse rates, and recognition of community-associated disease.8 A similar change has not been observed in animals; however, a hypervirulent strain (North American pulsotype 1 or NAP1) was identified in a dog.9 C. difficile strains have been classified on the basis of PCR-based typing of their ribosomal RNA genes (PCR-ribotyping). In one study, multiple animals in shelter environments were colonized with a single PCR-ribotype (SLO 066, 045, and 010 in three different shelters, respectively).10 More detailed genetic analysis of the C. difficile strains isolated by multilocus variable number of tandem repeat analysis (MLVA) suggested that horizontal transmission of strains 045 and 010 occurred within the shelter.

C. perfringens is especially widespread in soil and dust and consists of five biotypes, A to E, based on the possession of one or more of four major toxin genes (encoding alpha, beta, epsilon, and iota toxins). Each biotype can also express a subset of at least 10 other established toxins, including C. perfringens enterotoxin (CPE). Almost all infections in dogs and cats are C. perfringens biotype A, which also causes the majority of clostridial food-borne illness in humans. The zoonotic potential of C. difficile and C. perfringens is still incompletely understood.

The importance of C. perfringens and C. difficile as causes of diarrhea in dogs and cats has been controversial, because they can be isolated from both diarrheic and healthy animals. For example, C. perfringens can be isolated using culture from the feces of more than 70% of both diarrheic and nondiarrheic dogs.11,12 The prevalence of C. perfringens colonization of healthy cats appears to be lower than that in dogs, with isolation rates of 43% to 63%.13 Similarly, toxin production can be detected in both healthy and diarrheic dogs and cats, although most studies have shown a correlation between production of certain clostridial toxins and diarrhea.11

Both C. difficile and C. perfringens cause diarrhea by producing toxins. The diarrhea can be mild and self-limiting or severe, acute, and hemorrhagic, with life-threatening consequences that relate to dehydration and hypovolemic shock. Inappetence, vomiting, fever, and abdominal pain have also been described in cats with C. difficile-associated diarrhea.14 Vomiting can also occur in dogs. Although clostridial diarrhea is often described as a large bowel–type diarrhea, clinical manifestations of both small and large bowel diarrhea have been well documented.

C. difficile can produce up to five toxins, the most well studied being toxin A (TcdA), toxin B (TcdB), and C. difficile binary toxin (CDT, an ADP-ribosyltransferase that is made up of two components). CDT-positive strains have not been reported in dogs and cats. In contrast to humans, a history of antibiotic use does not always seem to be necessary for colonization and disease in dogs and cats, although in one study administration of antimicrobials before admission and the use of immunosuppressive drugs during hospitalization were risk factors for nosocomial colonization.4 Toxins A and B are thought to be most important in the pathogenesis of diarrhea.15 These are large toxins that inactivate the Rho family of GTPases, which regulate intracellular actin dynamics. The result is a disruption of the cell cytoskeleton, with subsequent rounding and death of intestinal epithelial cells, and loss of tight junctions. The two toxins also cause release of inflammatory cytokines from mast cells, macrophages, and epithelial cells.15

In dogs, C. perfringens infection has been associated with nosocomial diarrhea,16 hemorrhagic enteritis,17–19 and acute and chronic large bowel diarrhea. C. perfringens diarrhea in dogs and cats is thought to occur subsequent to massive proliferation and sporulation of resident clostridial organisms in the intestinal lumen following an alteration in local intestinal conditions. Decreased peristalsis, the effects of antimicrobial drugs on the resident intestinal microflora, diet changes, and/or co-infections with other intestinal pathogens has the potential to trigger sporulation. C. perfringens produces CPE on sporulation, but other toxins and bacterial virulence factors may also be involved in the pathogenesis of diarrhea, because diarrhea can occur in the absence of CPE production. CPE is a pore-forming protein toxin that is released when vegetative clostridial cells lyse and release their spores. It binds primarily to claudin, a component of epithelial tight junctions, which leads to increased paracellular permeability.20 The role of CPE in the development of diarrhea in dogs and cats is unclear, because CPE is detected in 34% of diarrheic dogs, and in 5% to 14% of nondiarrheic dogs.11,12 There may be an association between the detection of CPE in dogs with acute hemorrhagic diarrheal syndrome (AHDS), as CPE was detected in 8 of 12 dogs (67%) with AHDS.18 The prevalence of C. perfringens–associated diarrhea in cats is much lower than in dogs, and CPE has been detected at a similar rate in diarrheic and nondiarrheic cats (2% to 4.1%).13 In another study, CPE was detected with ELISA in 19.6% of 46 diarrheic dogs versus 2.1% of 48 healthy dogs, and in 8.3% of 48 diarrheic cats versus 0% of 39 healthy cats.21 In a PCR-based study of cats and dogs in an animal shelter in Florida, the C. perfringens alpha toxin gene was detected in 64% of 50 diarrheic dogs and 40% of 50 nondiarrheic dogs, which was significantly different.22 In contrast, it was detected in 42% of 50 diarrheic and 50% of 50 nondiarrheic cats in the same shelter.23 Thus the role that C. perfringens plays in feline diarrhea, if any, remains unclear.

Physical examination findings in dogs and cats with severe clostridial diarrhea include dehydration, fever, and abdominal pain, with or without signs of hypovolemic shock. Rectal examination may reveal loose or watery stools, sometimes with fresh blood and mucus.

Basic laboratory testing in dogs and cats with clostridial diarrhea usually reveals mild and nonspecific changes. A neutrophilic leukocytosis with a left shift and toxic changes may be present in dogs and cats with acute clostridial gastroenteritis. In addition, a discordant hematocrit and serum total protein concentration can be identified in some dogs with C. perfringens and C. difficile-associated diarrhea. The hematocrit can be markedly increased in the face of a normal or low-normal total protein. 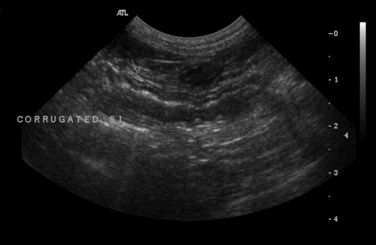 Diagnostic assays available for clostridial enterocolitis in dogs and cats are shown in Table 48-1. Because organisms and their toxins can be found in healthy and diarrheic animals, the results must be interpreted in light of the history, clinical signs, and diagnostic testing to rule out other causes of disease.

Diagnostic Assays Available for Clostridial Enterocolitis in Dogs and Cats

Spore-forming rods may be identified on microscopic examination of fecal smears that have been stained with Wright stains (see Figure 48-1). Rods that contain endospores have the appearance of “tennis racquets” or “safety pins.” However, there is no association between fecal endospore counts and the presence of diarrhea, or between endospore counts and the detection of CPE in fecal specimens. Detection of fecal endospores is thus an unreliable test for diagnosis of C. perfringens diarrhea in dogs and cats and should not be used as a stand-alone test to make clinical inferences in diarrheic dogs and cats.11,24

C. difficile can be isolated from 0% to 40% of diarrheic and healthy dogs. When fecal culture for C. difficile is performed on a viable fecal specimen by a reputable laboratory, a negative result suggests that C. difficile is not present. However, a positive culture does not differentiate between toxigenic and nontoxigenic strains, and further testing for toxin is warranted.

Because of the high carriage rate of C. perfringens in both healthy and diarrheic dogs (>70% in both groups), routine isolation of C. perfringens is not recommended for diagnosis, unless epidemiologic studies that require genetic typing are undertaken in outbreak situations. Quantitative stool spore counts have been used to aid diagnosis of C. perfringens diarrhea in humans. The stool is treated with heat or alcohol after which it is cultured anaerobically and colonies are counted. Median spore counts of greater than 106 per gram of feces collected within 48 hours after the onset of illness are suggestive of infection.25 Such counts can still be detected in humans with no signs of illness, and the method, when used without assessment of toxin production, has not proven useful for diagnosis of C. perfringens diarrhea in dogs.12