In about 5% to 10% of humans with Cushing’s syndrome, the glucocorticoid excess is the result of ACTH secretion by a nonpituitary tumor. Ectopic ACTH secretion may be associated either with highly malignant tumors, small cell lung carcinoma being most common, or with a variety of less aggressive neuroendocrine tumors of bronchial, thymic, pancreatic, or gastrointestinal origin. Plasma ACTH concentrations and cortisol secretion rates can be extremely high in ectopic ACTH syndrome, and as a consequence the clinical manifestations can be very pronounced.

In ectopic ACTH syndrome, suppression of cortisol secretion is typically not seen on classic dynamic tests such as the high-dose dexamethasone suppression test (HDDST), underlining the autonomous character of ACTH secretion. Although the source of the ectopic ACTH release may be a very small tumor, modern diagnostic imaging techniques in expert hands will succeed in locating it in the majority of cases (Newell-Price et al, 1998).

Ectopic ACTH syndrome has also been documented in dogs. The most convincing case report concerns an 8-year-old German shepherd (Galac et al, 2005). The dog was referred because of polyuria, polydipsia, polyphagia, and frequent panting. Physical examination revealed no abnormalities except an enlarged liver. Laboratory findings included an increase in plasma activity of alkaline phosphatase (111 U/L; reference range 15 to 69 U/L) and hypokalemia (3.4 mmol/L; reference range 3.6 to 4.8 mmol/L). Urine specific gravity was low (1.008). The basal urinary corticoid : creatinine ratios (UCCRs) on 2 consecutive days were 236 and 350 × 10-6 (reference range < 10 × 10-6) and as such compatible with hypercortisolism. After collection of the second urine sample, an oral HDDST was performed. The dog received 3 doses of 0.1 mg/kg body weight dexamethasone at 8-hour intervals and the third urine sample was collected on the following morning (i.e., 8 hours after the last dose of medication). The UCCR after dexamethasone administration (226 × 10-6) was not suppressed more than 50% of the mean UCCR of the basal samples, leading to the diagnosis of nonsuppressible hypercortisolism (Galac et al, 2010). Plasma ACTH concentrations (159 and 188 ng/L; reference range 5 to 85 ng/L) were greatly elevated, pointing to dexamethasone-resistant pituitary-dependent hypercortisolism (PDH). Moreover, ultrasonography revealed equal enlargement of both adrenal glands. Because pituitary imaging did not reveal pituitary enlargement, a pituitary microadenoma was suspected. However, histologic examination of the pituitary tissue removed by transsphenoidal hypophysectomy revealed no adenoma. Immunohistochemical staining of the pituitary gland demonstrated normal growth hormone and α-melanocyte–stimulating hormone pattern, while ACTH immunopositive cells were identified only sporadically. Moreover, the clinical manifestations became exacerbated after surgery, including severe hypokalemia. Both the UCCR (1,518 and 2,176 × 10-6) and the plasma ACTH concentration (281 ng/L) were further increased. In addition, there was no response of plasma concentrations of ACTH and cortisol to corticotropin-releasing hormone (CRH) administration, whereas in dogs with PDH plasma concentrations of ACTH and consequently cortisol increase within 5 and 10 minutes, respectively, after stimulation with CRH (Figure 52-1). Computed tomography of the abdomen revealed a tumor in the region of the pancreas. During laparotomy, a 5 mm nodule was located in the pancreas, together with an enlarged adjacent lymph node and nodular changes in the liver. Partial pancreatectomy, extirpation of the lymph node, and liver biopsy were performed, and histologic examination revealed a neuroendocrine tumor with metastases in the lymph node and liver. The second surgical intervention was not curative, probably because of additional metastatic tumor tissue that was not removed. Nevertheless, the dog did well for more than 2 years on treatment with trilostane (see Chapter 51). 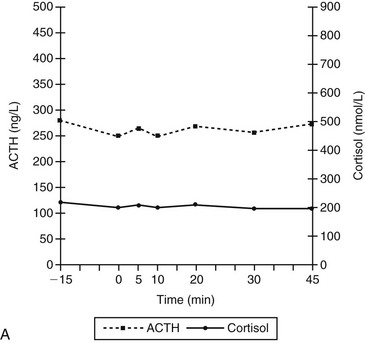 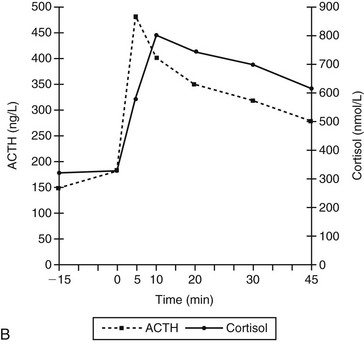