Disorders of the Lens

Disorders of the Lens

The crystalline lens is an avascular, transparent, biconvex structure that serves, along with the cornea, to refract and focus an image on the retina. During embryogenesis, lens development is supported anteriorly by the pupillary membrane vasculature and posteriorly by the hyaloid vasculature. Abnormalities of these vascular structures may be associated with congenital lens malformations or cataracts.

The lens is supported by zonular fibers that originate at the ciliary body and insert at the lens equator. The zonules facilitate accommodation, which is controlled by the musculature of the ciliary body. Loss of zonular attachment results in lens instability and lens luxation.

The lens is divided into nuclear, cortical, and capsular regions. The lens nucleus is located centrally and is formed during embryogenesis. Abnormalities of the nucleus typically are congenital, but not all congenital lens abnormalities involve the nucleus. The lens cortex surrounds the nucleus and can be divided into anterior, posterior, and equatorial regions. The lens epithelial cells are located just under the anterior lens capsule. The epithelial cells undergo migration and replication and, at the lens equator, elongate anteriorly and posteriorly to form new lens cortical fibers, are displaced centrally, and join other lens fibers anteriorly and posteriorly at the regions known as the lens sutures. It is the regular arrangement of lens fibers that allows transparency. Changes in lens fiber arrangement or composition result in an opacity, termed a cataract. Insults to the lens epithelium may result in cell death, posterior cell migration, or epithelial-mesenchymal cell transformation, all of which contribute to cataractogenesis.

New lens fibers are added throughout life, but the lens is restricted in the size to which it can grow. As a result, rather than increase in size, the lens increases in density and the central lens becomes compressed. This results in lenticular sclerosis, a zone of change in transparency between the central and peripheral lens. Clinically this becomes apparent at the age of 6 years in most dogs and cats and increases with age (Figure 253-1). 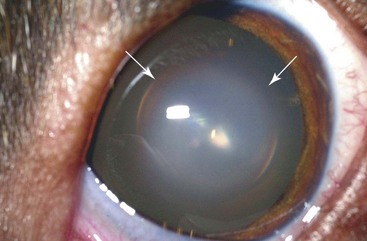 Figure 253-1 Lenticular sclerosis (arrows) of the axial lens in an 11-year-old Labrador retriever.

The lens is surrounded by a capsule comprised of the basement membrane of the lens epithelial cells. The anterior lens capsule (50 to 75 µm) is thicker than the posterior capsule (5 µm). The capsule is a semipermeable membrane allowing nutritional substances and metabolic waste materials to pass while serving to isolate the antigenic lens protein. In hypermature cataracts, lens proteins can break down, leak across the capsule, and result in lens-induced uveitis. With traumatic or spontaneous rupture of the lens capsule, lens proteins enter the anterior chamber in large quantity, resulting in phacoclastic uveitis.

Congenital abnormalities of the lens may be solitary or part of multiple ocular anomalies and include variations in lens shape, size, location, or transparency. They may be inherited or result from toxic, infectious, nutritional, or other insults during embryogenesis. The most common congenital lenticular abnormalities are microphakia, lens coloboma, spherophakia, posterior lenticonus, cataract, and ectopia lentis. These may be associated with microphthalmia, persistent pupillary membranes, persistent hyaloid, persistent tunica vasculosa lentis, anterior segment dysgenesis, retinal dysplasia, retinal detachment, or other ocular malformations.

When a congenital ocular abnormality is present, a complete dilated ophthalmic examination of both eyes should be performed. If no obvious cause is apparent, the abnormality should be presumed to be inherited, and affected animals should not be used for breeding. In addition, parents and littermates should be examined whenever possible. Follow-up examination of affected animals should be performed to monitor for progression of cataract or glaucoma. When significant cataracts are present, surgical removal may be an option, but placement of an intraocular lens may be difficult or impossible in cases of microphakic lenses or microphthalmic eyes. Additionally, these eyes are at increased risk of postoperative glaucoma and retinal detachment compared with the eyes of routine cataract patients.

A cataract is defined as an opacity of the lens or its capsule regardless of size. Cataracts are classified by age of onset, location, severity, and cause (Table 253-1). Cataracts may be congenital (present at birth), juvenile (appearing at <2 years of age), adult (appearing at 2 to 6 years of age), or senile (appearing at >6 years of age). Cataract locations are described as nuclear, cortical (anterior, posterior, equatorial), capsular, and axial versus peripheral. With respect to severity and the amount of lens affected by a cataract, the terms used are incipient (does not affect vision significantly; Figure 253-2), immature (interferes with vision but does not completely prevent it; Figure 253-3), mature (obscures an image entirely; Figure 253-4), and hypermature (liquefactive degeneration of the lens proteins has occurred). Liquefaction of lens protein results in lens-induced uveitis that may lead to globe hypotony, iris hyperpigmentation, aqueous flare, miosis, synechia, keratic precipitates, lens instability, secondary glaucoma, vitreous degeneration, or retinal detachment (Figure 253-5). Hypermature cataracts are characterized clinically by irregularity of the lens surface, a deeper anterior chamber, capsule wrinkling, and mineralization. Hypermature cataracts occasionally may undergo substantial or complete resorption in which the cortex liquefies and the nucleus shifts and are then termed morgagnian cataracts (Figure 253-6). In some of these cases, the patient may regain vision as the cataract resorbs, although retinal detachment often occurs during rapid resorption. 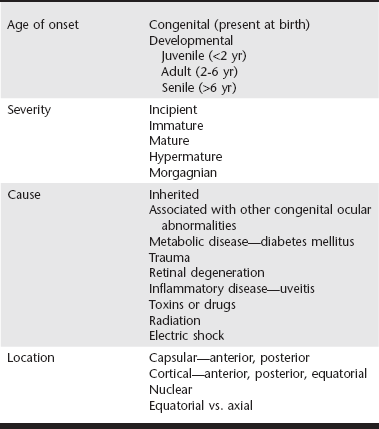 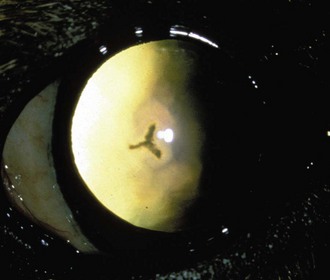 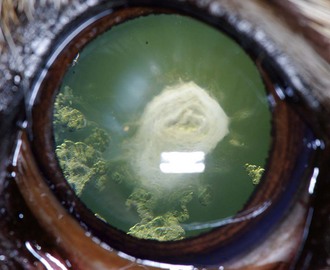 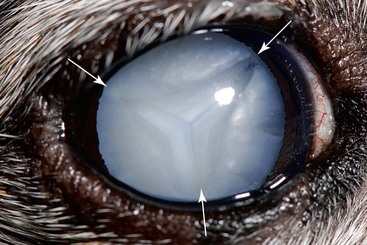 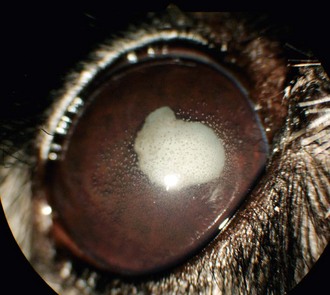 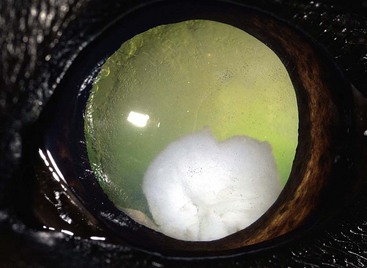 Figure 253-6 Hypermature morgagnian cataract. Because the majority of the cataractous lens cortex has been resorbed, the remaining lens nucleus has settled ventrally in the capsular bag.

Most canine cataracts are inherited or caused by diabetes mellitus. Inherited cataracts are seen in most breeds of dogs and in mixed-breed dogs. Inherited cataracts may be congenital or acquired and vary by breed in age of onset, location, severity, and progression. Affected animals should not be used for breeding regardless of the severity of the cataract. Metabolic causes of cataracts include diabetes mellitus and, less commonly, hypocalcemia. In dogs affected with diabetes mellitus, 50% will develop cataracts within 170 days of diagnosis of diabetes and 80% will have cataracts by 470 days. Diabetic cataracts begin with vacuoles or “bubbles” in the equator of the lens that progress, often rapidly, to swelling and rupture of lens fibers with subsequent complete opacification and clefting of the lens fibers at the suture junctions due to fluid accumulation (see Figure 253-4). Diabetic cataracts result when the enzyme aldose reductase catalyzes the reduction of glucose to sorbitol. The intracellular accumulation of sorbitol in the lens leads to an osmotic shift and swelling and disruption of lens fibers. Due to rapid and dramatic swelling of the lens, subsequent spontaneous lens capsule rupture has been described in dogs with diabetes mellitus as well as in nondiabetic dogs with rapidly progressive cataracts (Figure 253-7). Spontaneous lens capsule rupture is both a medical and a surgical emergency, with phacoclastic uveitis expected within days of the rupture. Additional causes of cataracts in dogs include trauma, uveitis, retinal degeneration, nutritional deficiencies, electrical shock, and radiation. Feline cataracts most commonly occur secondary to anterior uveitis. Inherited cataracts have been described in cats, but cataracts secondary to diabetes are not typically seen in the cat. 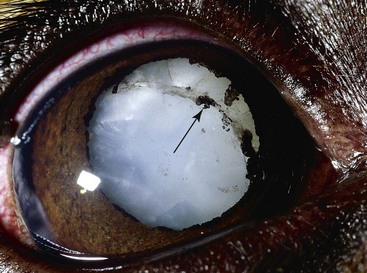 Figure 253-7 Spontaneous lens capsule rupture secondary to diabetes mellitus. The lens capsule has ruptured equatorially with retraction of the anterior lens capsule (arrow) and exposure of the lens cortex.