The chamois is an artiodactylid of the Bovidae family, Caprinae subfamily. Two species of chamois are described: Rupicapra pyrenaica occurs in the Pyrenees and adjacent mountain ranges of northwestern Spain, and Rupicapra rupicapra is distributed throughout the Alps and the northern mountain ranges separating Poland and the Czech Republic and toward the east in Turkey, the Caucasus, and the Balkan region.34 A subspecies (Rupicapra p. ornata) only occurs in the Abruzzo National Park in the Apennines mountains of Italy and is listed in Appendix 1 of the Convention on International Trade in Endangered Species (CITES).3 The southern chamois (R. pyrenaica) is listed at “lower risk” but “conservation dependent” by the International Union for Conservation of Nature and Natural Resources (IUCN, World Conservation Union).13

In the wild, R. rupicapra is widely distributed; current population estimates for Switzerland alone exceed 100,000 individuals.7 However, some local populations of chamois, such as the small Greek chamois population belonging to the Balkan subspecies (R. r. balcanica), are under pressure because of poaching and habitat degradation. Several other subspecies are listed as threatened by the IUCN: R. r. caucasica is classified as “vulnerable” and R. r. tatrica as “endangered,” whereas R. r. cartusiana is classified as a “critically endangered” subspecies. Data are insufficient as to the current status of R. r. asiatica.13

At the end of the last Ice Age, the chamois retreated to the various mountain ranges. At present the species is naturally colonizing new biotopes, such as the Mediterranean region of Piermont in Italy. Furthermore, the chamois has been successfully reintroduced into the Swiss Jura and the Black Forest and Saxony in Germany, and it constitutes one of the many alien species of New Zealand.

The chamois is a prized hunting trophy throughout its distribution range. The meat is greatly valued, and the skin is made into “shammy” leather, which is widely used for polishing cars. Of particular traditional interest in southern Bavaria and Austria is the highly prized winter hair (1 g costs about 30 Euro) from the back of the chamois, which is bound into ornamental “Gamsbaerte” (see, e.g., www.gamsbart.at).

Chamois spend the warmer months of the year on higher-elevation alpine meadows. In the late fall and winter, the animals descend to lower elevations and at times move into forest areas. When disturbed, a sentinel animal stomps its foreleg and emits a high-pitched whistling alarm call. The animals flee at high speeds (50 kph, 30 mph) into the cliff faces. Chamois are particularly good climbers and may use the smallest of cracks to advance nimbly up a rock face. They are reported to jump at least 2 m (6½ ft) in height and 6 m (20 ft) in length.32

There is a distinct seasonal variation in social structure in this species. In the spring the females leave the groups to give birth in May and June to the kids after 170 days’ gestation. Subsequently, they form larger female-kid groups. Mature adult males (8-9 years) remain alone most of the year, joining the groups in the late summer in time for the autumn rut.

Rutting behavior is spectacular, with adult males chasing the younger males from the groups. The animals are often seen chasing each other at breakneck speeds up sheer rock faces, covering hundreds of meters’ elevation in a few seconds32 (Figure 50-1). 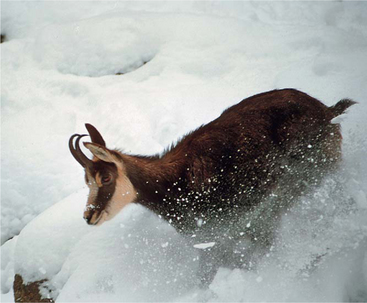 In a study in the Bavarian Alps, home range size varied from 144 to 635 hectares (mean, 398 ha). However, the core areas (90% utilization densities) were only 4 to 7 ha in size. Females and males had similar home ranges, with home range size decreasing in males with age.10

The general anatomy of the chamois is similar to the domestic goat. In the chamois there is a slight sexual dimorphism, with males weighing 35 to 50 kg (77-110 lb) and females weighing 25 to 35 kg (50-77 lb). In comparison, the southern chamois (R. pyrenaica) is somewhat smaller and lighter in weight. During summer the coat is light brown to brown with distinct, very light, yellow-white markings on the cheeks, dorsal nose, and upper neck, leaving the eyes masked in dark brown. During the winter the hair coat markedly darkens. The southern chamois has a generally lighter hair coat with a reddish tinge.

The sharply pointed, backward curved horns are found in both genders and may reach 350 mm (14 inches) in length.28 The southern chamois has slightly shorter and thinner horns that are less curved. With experience, the horns may be used to determine age. Dentition is equivalent to domestic ruminants, with 32 permanent teeth. Age determination using dentition is very imprecise and varies greatly in the literature. Incisor 1 (I1) erupts at 16 to 26 months, I2 at 26 to 30 months, and I3 at 32 to 44 months, with permanent dentition established by month 45.28

Chamois are rarely held in International Species Information System (ISIS) member institutions; only 55 R. rupicapra in 12 institutions are listed. Munich Zoo in Germany is the only institution in the world that holds a captive group of Rupicapra p. ornata.3 On the other hand, the chamois is a common captive species in various game parks and nonscientific institutions throughout its European distribution range.

Generally, chamois are considered difficult to house in zoologic institutions. They are very sensitive to high environmental temperatures, but are resistant to very low temperatures. Within their distribution range, they may be housed outdoors without a stable or additional protection. The animals are best housed as a harem group in a large, naturalistic enclosure that provides sufficient cover and shade.20 The enclosure should obviously reflect the natural environment and provide rocky faces and outcrops the animals may use for climbing and viewing. Fencing of 2.5 to 3.0 m (∼8-10 ft) in height is reported to be sufficient.36

From the management point of view, it is important to have a plan in place to deal with juvenile males. At 2 years of age, it will be necessary to remove these animals from the group before the autumn rut because the dominant male will inflict severe traumatic injuries or death. Some institutions have reported problems with particularly aggressive males that attacked and killed females within the group. Experience has shown that these males are best removed. Introduction of new individuals into an established group is extremely difficult because of intraspecies aggression and must be carried out cautiously. Several mixed-species enclosures with chamois have been described (e.g., Salzburg with chamois, European otter, and alpine marmot). Because of the distinct fighting behavior of the chamois, it is advised not to mix this species with other mountain ungulates (e.g., ibex).

In the wild the summer diet consists mainly of grasses, browse (shrubs, trees, conifers), and a significant wooden fraction. In winter, when grasses become unavailable because of snow-cover browse becomes the main constituent.6 It must be assumed that foraging habits in the wild vary significantly with habitat use. Furthermore, it is important to realize that in chamois, as with many northern species, body condition has a marked annual pattern. This variation is an expression of seasonal fluctuations in metabolic rate, which enables northern wild ruminants to deal with the energetically critical winter period.5 Captive chamois should be provided very-good-quality hay (hand-processed, first-cut alpine hay). Additionally, browse should be available at all times. Although not necessary, small quantities of fruit and vegetables may be supplied to provide variety. As in other ruminants, local deficiencies in mineral content may be provided for with commercial salt blocks.

The chamois have a distinct mating season. The single kid is born after 153 to 180 days of gestation in May and June in the alpine region. Only very rarely are twins born. Before birth the females no longer tolerate the juveniles from the previous year and sometimes leave the group. Birth within the group is strongly recommended. Kids weigh between 3 and 5 kg (6½-12 lb) at birth and double their weight after 3 weeks.36 Breeding generally is not a problem in this species. Pregnancy diagnosis is best achieved by determining fecal estrogens and pregnanes.38

Physical restraint may only be recommended for newborn animals. In the wild, chamois may be captured using box traps, foot snares, drive nets, and drop nets. Care must be taken with snares during the winter months because these may cause severe digital frostbite. Use of nets and box traps has resulted in skewed gender ratios, with significantly more females captured. Finally, it is important to realize that the effort needed to capture this species in an alpine environment is considerable. In the Swiss National Park, more than 200 hours were needed per captured animal, with 100 traps set simultaneously.40

Varying degrees of sedation may be achieved using acepromazine as granules (Vetranquil 1%, Albrecht, Germany) or as a paste (Sedalin, Chassot, Switzerland) at a dosage of 1 to 2 mg/kg orally (PO). The granules are mixed into moistened pelleted feed. Although this is not sufficient for subsequent physical restraint, it has proved valuable as transport and preimmobilization sedation.

Various methods have been described to immobilize chamois chemically. In the German-speaking areas of Europe, the Hellabrunner mix (125 mg xylazine + 100 mg ketamine per mL) was the method of choice until recently. It is important to note that the required dose (0.27 mg/kg ketamine + 0.34 mg/kg xylazine) for chamois is extremely low compared with other mountain ungulates.42 The advantage of this combination is that very low dart volumes (0.04-0.08 mL) are possible.

For prolonged procedures, intubation and inhalation anesthesia with isoflurane is recommended.

Conditions requiring surgical intervention are similar to those reported in domestic goats. Intraspecies trauma with various degrees of lacerations may play an important role in chamois, and a review of the social structure is always warranted.

The diagnostic approach in chamois employs the same techniques that are used in domestic goats. For an overview, the reader is referred to one of the standard veterinary texts.17 Several diagnostic limitations may result from the necessary chemical restraint.

The jugular vein is easily raised with digital pressure, allowing intravenous (IV) injection and venous blood collection. Peripheral venous catheters are placed into the jugular vein either directly through the skin or after a small skin incision. Catheters should be affixed with a skin suture securely tied around the catheter or with a drop of acrylate glue. Arterial blood collection is best carried out using either the brachial, femoral, or auricular arteries.

Using techniques described for domestic goats, cerebrospinal fluid (CSF) may be collected from the lumbosacral site. About 1 mL CSF per 5 kg of body weight may be safely removed. CSF flow is enhanced through compression of both jugular veins. Because changes in peritoneal fluid occur rapidly in response to inflammatory processes involving the peritoneum and the gastrointestinal tissues, collection and evaluation of peritoneal fluid after ultrasonographic localization of fluid pockets through abdominocentesis is an informative procedure.