Diagnosis and Treatment of Atlantoaxial Subluxation

Diagnosis and Treatment of Atlantoaxial Subluxation

Atlantoaxial (AA) instability with subluxation of C2 relative to C1 is a frequent cause of cervical pain as well as myelopathy in toy and miniature breeds of dogs. Congenital vertebral malformations along with abnormality or absence of ligamentous structures lead to contusion or compression of the cervical spinal cord and caudal brainstem. AA instability also occurs infrequently in large breeds of dogs and usually is secondary to traumatic injury of the cervical vertebral column. Because AA instability is a potentially life-threatening disease, it is important to recognize when it may be present so that the patient is handled appropriately. This will prevent exacerbation of the clinical signs until a definitive diagnosis is made and appropriate treatment is instituted.

The atlas (C1) and axis (C2) form a pivotal joint that allows free movement of the head about the longitudinal axis of the spine. Most rotational head movement centers around the dens, a bony process projecting rostrally from the body of the axis. The dens is held in place on the ventral aspect of C1, within the vertebral canal, by several ligaments (Figures 235-1 and 235-2): 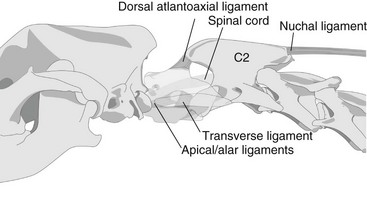 Figure 235-1 Normal atlantoaxial (AA) joint, lateral view. Note the relationships of the ligamentous and bony structures of the AA joint that allow normal head movement without injury to neural structures. 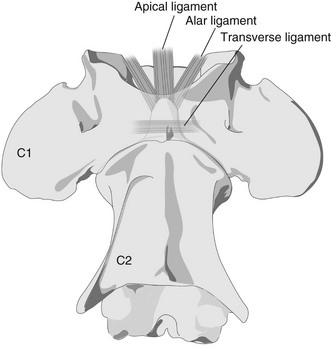 Figure 235-2 Normal atlantoaxial joint, ventrodorsal view. The apical and alar ligaments attach the dens to the occipital bones of the skull, whereas the transverse ligament crosses over the dens, maintaining it in place on the floor of the vertebral canal.

1. The apical and alar ligaments leave the apex of the dens and attach to the ventral aspect of the foramen magnum and the skull medial to the occipital condyles.

2. The transverse atlantal ligament is a strong ligament that runs transversely in the vertebral canal, crossing dorsally over the dens. This ligament is particularly important to AA joint stability since it holds the dens firmly against the ventral aspect of the atlas.

3. The dorsal atlantoaxial membrane is a fibrous extension of the joint capsule running between the arch of the atlas and the spinous process of the axis. It adds support limiting the amount of dorsoventral movement between C1 and C2.

The atlas articulates rostrally with the occipital condyles of the skull and forms a joint of which the main movements are flexion and extension of the head, the “yes” joint. Caudally, the atlas articulates with the axis allowing lateral and rotational movement of the head, the “no” joint. Working together, these two joints allow free motion of the head in all directions. The large nuchal ligament that attaches the spinous process of C2 to those of T1 and T2 functions in suspension of the head, forming a fulcrum at the AA joint (see Figures 235-1 and 235-2).

Instability of the AA region allows excessive flexion of the C1-2 joint that may result in subluxation of C2 relative to C1 and injury to the spinal cord (Figure 235-3). This usually occurs secondary to congenital or developmental abnormalities of the bones or ligaments of the AA joint, traumatic injury to the joint, or a combination of both (Figure 235-4). In many instances the abnormalities present are associated with the dens and include agenesis or hypoplasia of the dens, dorsal angulation of the dens, and fracture or avulsion of the dens from the axis. Absence or rupture of associated AA ligaments often contributes to the instability caused by congenital anomalies in the region. All of these findings are common in toy and miniature breeds of dogs. Traumatic rupture of the AA ligaments without associated anomalies of the AA joint is possible but usually occurs as a result of major traumatic injury to the cervical vertebral column. This is the most common cause of AA instability in large-breed dogs. Recently there have been reports (Owen et al, 2008; Warren-Smith et al, 2009) of larger-breed dogs with absence or incomplete ossification of the atlas (Figure 235-5). Associated AA subluxation in most of these dogs suggests another predisposing factor to AA instability. This was further investigated in another study characterizing the morphology of the atlas on computed tomography (CT) in various classes of dog breed (Parry et al, 2010). Dogs with ossification abnormalities involving the atlas were significantly more likely to have associated AA subluxation, although the underlying pathophysiology behind these findings is not known. AA subluxation rarely is seen in cats. Only a handful of cases have been reported, and all of them have been associated with congenital occipitoatlantoaxial malformations or malformations of the dens (C2). 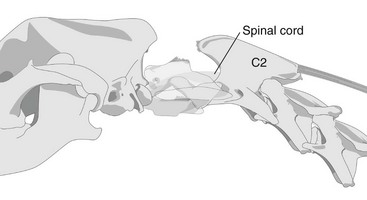 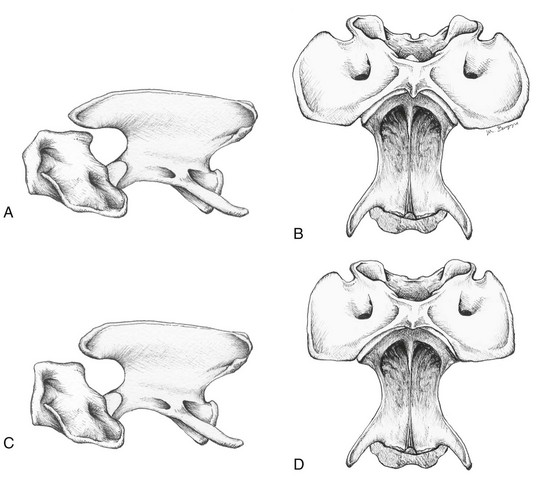 Figure 235-4 Comparison of C1 and C2 vertebrae. A and B, Lateral and ventrodorsal views illustrating the normal shape and relationship of C1 relative to C2. The spinous process of C2 typically spans the caudal third of the dorsal arch of C1 on the lateral view. The arch of the atlas is thicker than in toy or miniature breeds, with a layer of trabecular bone between the inner and outer layers of cortical bone, and the transverse process (wings) of the atlas are longer and thicker. C, Lateral view showing typical vertebral deformities seen in the atlas and axis of toy and miniature breeds. The spinous process of C2 often is foreshortened and minimally associated with the dorsal arch of C1. Dorsal atlantoaxial ligaments likely are reduced or nonexistent. The intervertebral foramen is comparatively large, and the vertebral arches of C1 and C2 are comparatively small and misshapen. D, Ventrodorsal view showing typical vertebral deformities seen in toy and miniature breeds. The wings of the atlas are very thin and often much smaller comparatively than in normal dogs. The articulation between C1 and C2 is widened and often malformed; there is much less bony mass in the body of C1 and C2. Significantly, these changes are accompanied by hypoplasia, agenesis, and abnormal angulation of the dens. 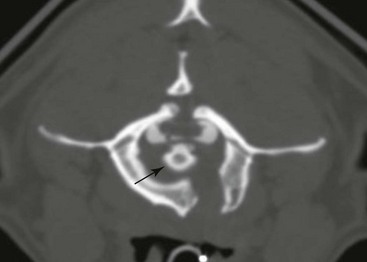 Figure 235-5 Transverse computed tomographic–myelographic image showing incomplete ossification of C1 in a 10-year-old Brittany spaniel with chronic cervical pain and tetraparesis. There is discontinuity of the dorsal arch as well as the body/ventral arch of C1. The dens is causing marked compression and dorsal displacement of the spinal cord within the vertebral canal. (Courtesy Dr. Robert Bergman.)

Regardless of the underlying cause, dorsal displacement of the cranial portion of the body of the axis into the vertebral canal causes compression, edema, and inflammation of the spinal cord that may extend cranially into the caudal brainstem. In addition, intraaxial hemorrhage into the central nervous system parenchyma also may contribute to the clinical signs (Kent et al, 2010). Cervical pain, myelopathy of varying degrees, and possible caudal brainstem signs may occur.

Malformations of the AA joint occur most frequently in toy and miniature breeds of dogs, especially Chihuahuas, Yorkshire terriers, toy and miniature poodles, Pomeranians, Japanese chin, Maltese dogs, and others. Clinical signs of a C1 to C5 myelopathy or cervical pain occur and may be acute or chronic in onset and progressive, nonprogressive, or intermittent. Often the signs occur secondary to mild “trauma” such as jumping off the bed or roughhousing with other dogs. Although clinical signs typically are reported in the first year of life, it is not uncommon for dogs older than a year, including middle-aged or older animals, to begin showing clinical signs. Severity of signs varies from mild cervical pain to profound cervical pain to tetraparesis, respiratory paralysis, and caudal brainstem signs (e.g., hypoventilation, obtundation, vestibular signs). Traumatic AA instability, with or without an underlying congenital malformation, usually is the cause of AA subluxation in larger-breed dogs (>10 kg).

Occasionally dogs with AA instability have a history of seizurelike signs or episodes that occur intermittently. Owners often describe an associated transient apnea and paresis. The episodes may be related to a mild trauma, such as jumping out of a car or going down the stairs. These clinical signs may occur more commonly with malformations of the dens, specifically agenesis or dorsal angulation of the dens.

Differential diagnoses for dogs with suspected AA instability or subluxation include intervertebral disk disease, cervical trauma or spinal fracture, infectious or inflammatory disease (e.g., granulomatous meningoencephalitis), other craniospinal anomalies (e.g., syringomyelia, Chiari-like malformation), and neoplasia (of the cervical spine or brain). Since the history, signalment, and clinical signs of AA instability may be indistinguishable from those of other differential diagnoses, it is important to take appropriate precautions in any animal that may have vertebral instability at the AA joint.