First Described: Dermatophytosis was described independently by several scientists in the 1830s and 1840s,1 but probable descriptions of ringworm date back to ancient Greek times. Dermatophytes were more fully characterized in the early 1900s by Sabouraud.2

∗Do not invade hair; the role of T. terrestre in disease causation is controversial.

Risk factors for dermatophytosis in dogs and cats include young age and concurrent immunosuppressive disorders, especially endogenous or iatrogenic hyperadrenocorticism. Dermatophytosis is more common in cats than in dogs, but the prevalence varies with geographic location. Positive dermatophyte cultures occurred in 6% of submissions from dogs or cats in the southern United States (3.8% for dogs and 14.9% for cats),17 and in the United Kingdom, 16% were positive (10% for dogs and 16% for cats).9 Higher prevalences of detection (19% to 43%) have been reported in some studies of cats and dogs, with and without skin lesions, from parts of continental Europe.3,5,10 Dermatophytosis (especially geophilic dermatophytosis) is more prevalent in regions with high warmth and humidity. Shelter cats, the vast majority of which lack skin lesions, are more likely to carry dermatophytes on their haircoats than healthy pet cats. Dermatophytes were cultured from 5.5% and 19% of all shelter cats depending on geographical region,18,19 whereas the prevalence of M. canis isolation from healthy pet cats is generally less than 2.5%.18 Animals admitted to breeding or boarding facilities that have a history of dermatophytosis are also at risk of infection, whereas dermatophytes are generally not detectable on the haircoats of animals in facilities without a history of infection.20 Retrovirus-infected cats are no more likely to carry dermatophytes than retrovirus-negative cats,21 but retrovirus-infected cats carry a greater range of species and may be more likely to develop skin lesions (dermatophytosis). Genetic factors may also be important. Persian and Himalayan cats and Yorkshire and Jack Russell terriers appear to be predisposed to dermatophytosis.3,9,17 In particular, Persian cats are thought to be at greater risk for development of dermatophytic mycetomas (see Clinical Features). Dogs that hunt and burrow in soil may be at increased risk for infection by geophilic or sylvatic dermatophytes, which may explain the common distribution of lesions on the face and distal thoracic limbs for these dermatophyte species (Figure 58-1). 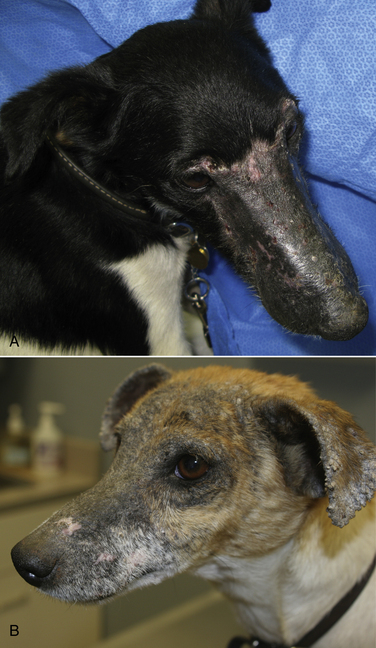 Pathogenic dermatophytes invade keratinized tissue that has been macerated or traumatized. Infections are localized to the stratum corneum, hair shafts, and claws. The clinical expression of the disease is affected by the fungal species and strain involved and the host response to infection.22 Infectious arthrospores, which are formed by the segmentation and fragmentation of fungal hyphae, adhere to the surfaces of skin and nails, germinate, and secrete proteases. These proteases, such as subtilisins, fungalysins, and a variety of acidic proteases,22,23 digest keratin into short peptides or amino acids, which are then used by the fungus as a source of nutrition. The pattern of proteases secreted by different dermatophyte strains may influence the clinical expression of disease. On the host, dermatophytes reproduce asexually through production of conidia.

Dermatophyte lesions form after an incubation period of 1 to 3 weeks. Classically, lesions are single or multiple and consist of circular regions of alopecia with an erythematous margin, superficial scale and crust, and follicular papules and pustules (Figure 58-2). Central healing may occur, sometimes with hyperpigmentation or hair regrowth in the center of the lesion. Pruritis is variable. Infection by T. mentagrophytes in dogs can result in progressive alopecia, with dramatic scaling and/or crusting and inflammation and in some cases scarring (see Figure 58-1). A kerion or kerion reaction (also known as nodular dermatophytosis) is a localized, nodular inflammatory lesion that results from dermatophyte infection and may be associated with infection by M. gypseum, T. mentagrophytes, or M. canis (Figure 58-3).10,24,25

FIGURE 58-2 A, Jack Russell terrier puppy with multifocal classic well-circumscribed lesions caused by infection by Microsporum canis. B, On questioning, the owner of the affected litter of puppies revealed that she also had a lesion on her arm. (Courtesy Dr. Terry Nagle.) 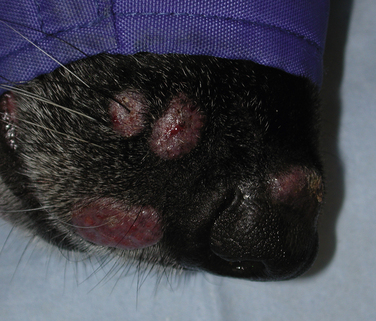 FIGURE 58-3 Nine-year-old female spayed labrador retriever with multiple kerions on the muzzle due to Microsporum canis infection. Another dog in the household had similar lesions that were less severe. (Courtesy University of California, Davis, Veterinary Dermatology Service.)

Longhaired cats may develop a poor haircoat, shed excessively, and vomit hairballs more frequently, because infected hair shafts are friable and prone to breakage. Persian and Himalayan cats (and very rarely, domestic longhair cats and dogs) with M. canis infections can develop dermatophytic mycetomas, which are coalescing subcutaneous nodular lesions that often drain purulent fluid (Figure 58-4).26–31 These develop when dermatophytes invade the dermis and subcutaneous tissues, presumably after traumatic implantation of fungal organisms from the haircoat of an already colonized or infected animal. These lesions have also been referred to as granulomatous dermatitis, Majocchi’s granuloma, or “pseudomycetomas,” although use of the last term was not recommended by the International Society for Human and Animal Mycology (ISHAM) committee for nomenclature of fungal diseases.32 In contrast to true mycetomas (eumycetomas), dermatophytic mycetomas are not caused by soil saprophytes, and lesions are often multiple and coalescing, rather than single and localized.10

FIGURE 58-4 A and B, Twelve-year-old female spayed Himalayan with a dermatophytic mycetoma. Ulceration and fistulation are present. Ultimately, surgical excision of the mycetoma was required. (Courtesy University of California, Davis, Veterinary Dermatology Service.)

In dogs, dermatophytosis can occur anywhere on the body but most often occurs on the face, distal limbs, and tail. Dogs are more likely than cats to present with classical, localized, well-circumscribed lesions. Claw infection is manifested by erythema and thickening of the ungual fold, deformity and friability of the claw, and sometimes footpad involvement (Figure 58-5). Kerions most commonly develop on the muzzle or distal limbs, and with digital pressure they typically have a boggy or exudative appearance (see Figure 58-4). 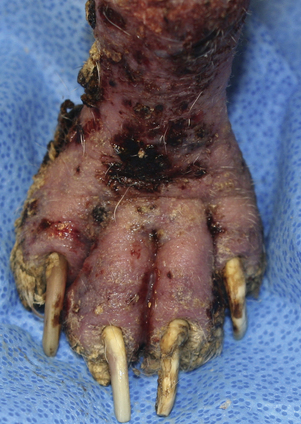 Lesions in cats are extremely pleomorphic and can consist of one or more areas of partial alopecia with scale and crusts, especially on the pinnae and pinnal margins, nasal bridge, distal limbs, or tail (Figure 58-6). Some lesions resemble miliary dermatitis or are focal, pruritic lesions that resemble eosinophilic plaques. Cats with dermatophytic mycetomas have focal (and rarely disseminated) nodular, sometimes ulcerated cutaneous lesions, usually on the dorsum or neck, which may drain serous or purulent fluid (see Figure 58-4).

Diagnosis of dermatophytosis is based on clinical suspicion together with the results of Wood’s lamp examination, skin and hair cytology, skin scrapings (to evaluate for demodicosis), and/or fungal culture (Table 58-2). In both dogs and cats, lesions are rarely symmetric. This asymmetry can help differentiate dermatophytosis from other diagnoses that more commonly cause symmetrical lesions. However, diagnosis that is solely based on the appearance of lesions and/or Wood’s lamp examination is not recommended, because it can lead to misdiagnosis and unnecessary treatment that may be expensive and even harmful. In addition, mixed processes can occur, such as co-infections with dermatophytes and staphylococci or dermatophytes and Demodex mites. Because dermatophytosis can take on a wide range of appearances in cats, it should be considered a possible differential diagnosis in cats with any skin disease.33

The results of routine laboratory testing in dogs and cats with dermatophytosis are typically unremarkable or show abnormalities associated with predisposing disease conditions (such as hyperadrenocorticism).

A positive Wood’s lamp examination is characterized by the presence of apple-green fluorescence along the length of a hair shaft (Figure 58-7). The fluorescence results from tryptophan metabolites produced by some M. canis strains when they grow within the hair shaft; the metabolite is not produced when the organism grows on scale or the claw. A significant proportion of M. canis infections do not fluoresce,3,9 and other dermatophyte species of veterinary significance do not produce fluorescent metabolites, so the sensitivity of Wood’s lamp examination is low. The lamp should be allowed to warm up for several minutes before it is used, and the lights should be turned off during the examination. False-positive results can occur if topical ointments, scale, lint, keratinized debris, or sebum are present and incorrectly interpreted as dermatophyte fluorescence. Hairs that fluoresce can be plucked and submitted for cytologic examination and fungal culture. 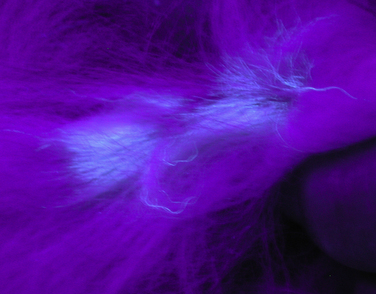 Cytologic examination of hairs plucked from lesions or the circumference of lesions may reveal fungal hyphae or chains of arthroconidia (ectothrix spores) in some affected animals; macroconidia, which form in culture, are not seen (Figure 58-8). Addition of a clearing agent such as 10% or 20% potassium hydroxide (KOH) or chlorphenolac is recommended, which removes scale and debris that can interfere with organism identification. Potassium hydroxide solutions must be gently heated with the hair for 10 minutes for clearing to occur, or incubated overnight at room temperature. Chlorphenolac, which is composed of chloral hydrate, phenol, and lactic acid, is not readily available and is toxic, but it does not require heating or prolonged incubation. Examination of hairs mounted in mineral oil can still yield positive results in the absence of a clearing agent.25 Cytologic examination has low sensitivity when compared with culture, and experience is required for proper organism identification.

Culture is the gold standard for diagnosis of dermatophytosis. Ten to 12 hairs (ideally those that appear damaged or broken) should be plucked from the edge of lesions with sterile forceps and placed in a clean, dry paper envelope (preferably) or a sterile tube or container at room temperature. Scrapings of crusts from the edge of lesions or nail clippings (after cleaning the nail with 70% alcohol) can also be submitted (see also Chapter 4 for specimen collection methods for dermatophytes). Alternatively, a brand-new toothbrush (out of the package) can be used to collect specimens from lesions or the entire coat of a suspect animal by vigorous brushing for several minutes. The toothbrush is then submitted to the laboratory. Macerated tissue cultures can be performed on biopsy specimens from animals that have nodular dermatophytosis or dermatophytic mycetomas.

The most commonly used media for culture are Dermatophyte Test Medium (DTM) or Sabouraud’s dextrose agar. In-house DTM cultures, if performed, should be interpreted with caution. Flat Petri plates (as opposed to vials) should be used in order to facilitate inoculation and species identification. Inoculated media should be incubated at 24°C to 30°C; incubation at room temperature is more likely to result in false negatives.34 Growth occurs within 14 days, and often within 5 to 7 days, but may take up to 21 days (particularly for treated animals). Dermatophyte colonies, which are white or cream and powdery (Figure 58-9), should not be confused with those of saprophytic molds, which may be brown, green, black, gray, or mixed in color. The DTM turns red when the first dermatophyte colony is visible. Color changes that occur after the first colony appears may result from growth of saprophytic fungi. All suspicious colonies must be confirmed as dermatophytes and speciated based on spore morphology through the use of microscopy (see Figure 58-9). Spores form after 7 to 10 days of growth. The individual performing the identification should wear gloves. Tape is placed over the colony and transferred to a slide, on which a drop of stain is applied. A coverslip is then applied. Lactophenol cotton blue or new methylene blue are suitable stains. Dysgonic strains of M. canis have been described that have atypical morphology in culture, but these are rare.27,35 Whenever possible, submission to a veterinary diagnostic laboratory that follows Clinical and Laboratory Standards Institute (CLSI) guidelines is recommended to ensure proper quality assurance for culture and identification of dermatophytes. This also minimizes the risk of laboratory-acquired infections and contamination of the practice environment. Matrix-assisted laser desorption/ionization–time of flight mass spectrometry (MALDI-TOF) offers promise for rapid identification of dermatophytes in veterinary diagnostic microbiology laboratories in the future.36 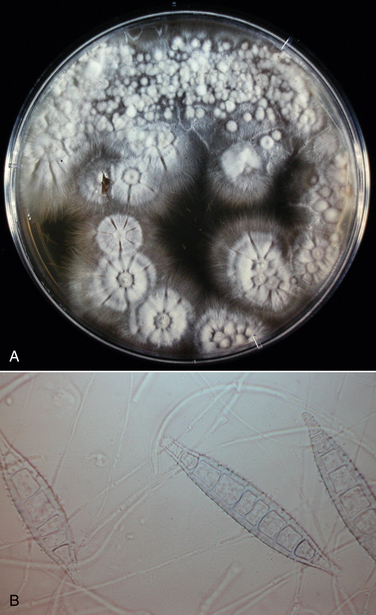 FIGURE 58-9 Selected cultural characteristics of dermatophytes. A, Microsporum canis from a cat with a dermatophytic mycetoma growing on inhibitory mold agar. B, Macroconidia of M. gypseum after growth in culture.