First Described: Cytauxzoon felis was first described in domestic cats from Missouri in 19761

Affected Hosts: Any felid; bobcats are the major reservoir host.

Cytauxzoonosis, a life-threatening acute febrile illness of cats, is caused by the hemoprotozoan parasite Cytauxzoon felis, an apicomplexan parasite within the order Piroplasmida and family Theileriidae.2 The parasite infects both domestic and wild Felidae, but not other mammals.3 Both Amblyomma americanum (Lone Star ticks) and Dermacentor variabilis (American dog ticks) harbor the pathogen and are competent transmission vectors, although it is likely that Amblyomma ticks are the more important natural disease vectors.4–6

As for other apicomplexan parasites, the parasite life cycle involves sexual reproduction in the vector tick and asexual reproduction in the mammalian host. The parasite is inoculated into the host as a sporozoite when an infected tick vector feeds. As for other members of the Theileriidae family, the pathogen exists within the mammalian host in both a non-erythrocytic (schizont) and an erythrocytic (piroplasm) form. Approximately 2 weeks after inoculation, schizogony occurs, whereby mononuclear cells become distended with parasites.7,8 When these cells rupture, merozoites are released and endocytosed by RBCs, where they are known as piroplasms.8 The piroplasms are ingested by naïve ticks during feeding (Figure 76-1). The acute illness, known as cytauxzoonosis, occurs during the schizogenous phase of infection, whereas piroplasms can be found both during illness and in healthy carrier cats. 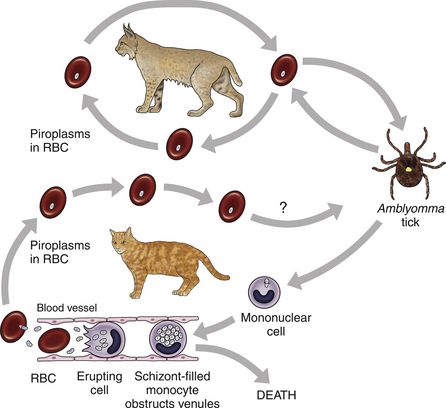 FIGURE 76-1 Life cycle of Cytauxzoon felis. The parasite is maintained in bobcats (top) which are subclinically infected. The sexual cycle of the organism occurs in Amblyomma americanum hard ticks, which then transmit sporozoites to domestic cats. Sporozoites invade mononuclear cells, where they undergo schizogony. Schizont-filled monocytes obstruct venules and capillaries and cause multiorgan failure and death. In cats that survive the schizogony phase, the organism infects erythrocytes and forms piroplasms. The importance of domestic cats as a reservoir for infection of ticks is unknown. The schizogony stage in the bobcat is relatively mild and brief.

There is no breed, sex, or age predisposition for infection, and retroviral infection has not been proven to predispose cats to infection or disease.9 Often, infected cats are young adults and previously quite healthy. They are typically outdoor or indoor/outdoor cats from wooded suburban or rural areas, where they are more likely to encounter a tick that has recently fed on an infected bobcat (Lynx rufus), the predominant reservoir host.9,10 Often, multiple cats in a neighborhood are affected nearly simultaneously, which likely reflects the presence of infected ticks. Infection occurs most commonly in spring and summer when the tick vector is most active.9 Originally identified in only the south-central United States, the geographic range of C. felis has expanded simultaneously with expansion in the range of the vector Lone Star ticks. Infections in domestic cats are now recognized throughout the south-central, southeastern, and mid-Atlantic states, and the pathogen has been identified in bobcats as far north as Pennsylvania and North Dakota (Figure 76-2).10,11 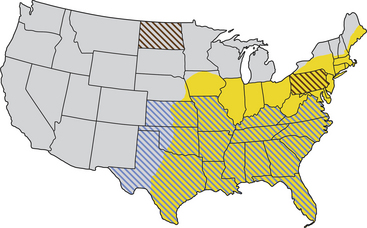 Owners of cats with cytauxzoonosis usually notice an acute onset of profound lethargy and anorexia in a previously healthy cat. Less consistently, owners report vocalization, elevation of the nictitans, tachypnea and/or dyspnea, or icterus, or that the cat feels warm to the touch.12 The vast majority of the considerable pathologic damage that occurs during acute illness is due to the schizogenous phase of parasitemia.8 The degree of schizogony appears to be correlated with severity of disease; bobcats (the natural host) undergo a brief and milder schizogenous phase as compared to domestic cats, and correspondingly illness is less pronounced in bobcats than in domestic cats.13 Schizont-distended mononuclear cells occlude small veins and capillaries, most notably in the liver, lung, spleen, and lymph nodes.8,14 Obstruction fuels hypoxic tissue damage and release of inflammatory cytokines, which can lead to systemic inflammatory response syndrome, sepsis, disseminated intravascular coagulation (DIC), and multisystem organ failure. The presence of piroplasms may trigger hemolysis in the later stages of the acute illness; however, hemolysis abates in surviving cats, and hemolytic anemia has not been noted in chronic carriers.15–18

Physical examination findings associated with acute cytauxzoonosis are nonspecific.8,12,19 The most consistent single finding is fever. Although temperatures greater than 104°F (40°C) are common, body temperature drops in moribund animals, and many cats are hypothermic for several hours before death.8,12 Cats are almost always lethargic. Icterus and pallor are common findings but may not be present initially. The nictitating membrane is commonly elevated (Figure 76-3). Both tachycardia and tachypnea, with or without increased respiratory effort, are also common. Cardiac murmurs are sometimes auscultated, especially in anemic cats. Splenomegaly, hepatomegaly, and lymphadenomegaly may be appreciable. Cats may have seizures or become obtunded shortly before death. Because the onset of illness occurs as long as 2 weeks after the cat is bitten by a tick, ectoparasites are not consistently found on examination. 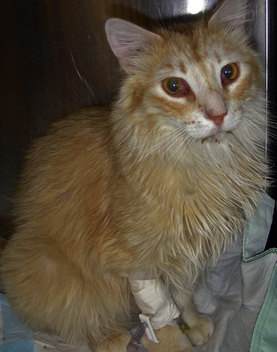 FIGURE 76-3 Cat with Cytauxzoon felis infection. There is elevation and hyperemia of the nictitating membranes.

Abnormalities on the CBC in cats with cytauxzoonosis commonly include pancytopenia or bicytopenia and characteristic signet ring intraerythrocytic inclusions (see Cytologic Examination) (Figure 76-4). Various combinations of neutropenia, lymphopenia, thrombocytopenia, and nonregenerative anemia are observed.12,19,20 Occasionally, neutrophilia or bandemia are observed. Although thrombocytopenia is usually identified and may be related to DIC or vasculitis, platelet clumping is common even in healthy cats and can result in false thrombocytopenia. Anemia may be absent at the onset of illness but usually develops about the same time piroplasms become identifiable. Because of the acute nature of the disease, anemia is initially nonregenerative. In recovered carrier cats, cell counts rebound to values within reference ranges, and chronic anemia is not a feature of the carrier state.15,17,18,21 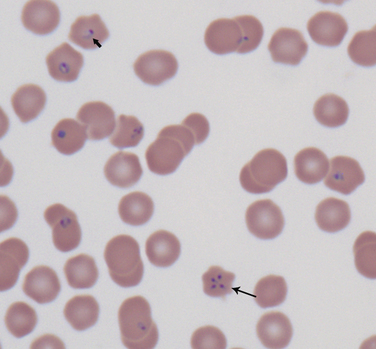 Although there are no specific findings on serum chemistry analysis, a number of abnormalities are commonly identified in cats with cytauxzoonosis. Hyperbilirubinemia is common and may result from hepatic vascular occlusion and/or hemolysis. The activities of serum ALP and ALT increase in a minority of sick cats, and increases are usually mild to moderate.12 Mild to moderate hyperglycemia is common in stressed, sick cats. Mild hypoproteinemia, hypocalcemia, hyponatremia, and hypokalemia can occur during acute illness.12,19 No consistent abnormalities have been reported on serum chemistry analysis for recovered carrier cats.17,21

Urinalysis results are rarely reported for cats with cytauxzoonosis.19 Certainly, hyperbilirubinemia may be reflected by bilirubinuria, and hyperglycemia that surpasses the renal threshold may cause mild glucosuria. In the author’s experience, the urinalysis is otherwise unremarkable.

Acute cytauxzoonosis is a form of sepsis and, as such, is expected to be associated with altered coagulability. Thrombocytopenia is common in affected cats, but because platelet clumping occurs readily in cats, the frequency of true thrombocytopenia may be overestimated.12,19,20 Although not often assayed, prolongation of APTT and PT in several affected cats suggests that DIC is a common complication.22,23

Imaging studies do not contribute directly to the diagnosis of cytauxzoonosis, and results are seldom reported in the literature. Splenomegaly, hepatomegaly, or both may be identified either on plain radiographs or on abdominal ultrasound examination. Although thoracic radiographic findings are seldom documented in the literature, the author has commonly identified diffuse interstitial pulmonary patterns on radiographs from cats with respiratory signs. Less commonly, alveolar lung patterns or pleural effusion are recognized.

Diagnostic assays currently available for cytauxzoonosis in cats are described in Table 76-1.

Careful microscopic examination for intracellular parasites is the most commonly used method for diagnosis of infection. A well-made thin blood smear stained with Wright’s stain or Diff Quik should be carefully scanned for either RBC piroplasms or schizont-laden mononuclear cells. Schizont-distended mononuclear cells are sometimes, but not usually, found on careful examination of the entire feathered edge of the blood smear during acute illness (Figure 76-5). If these cells are identified, a diagnosis of acute cytauxzoonosis is confirmed. More commonly, microscopic review allows identification of piroplasms within RBCs. Unfortunately, because illness is most associated with schizogenous replication, illness precedes development of piroplasms in up to half of cats examined. When cytauxzoonosis is suspected but piroplasms are not identified, reexamination of another blood smear the following day may yield positive results. Piroplasms are most often 1 to 1.5 µm, signet ring–shaped inclusions, but tetrad, “safety pin,” and coccoid organisms are seen on occasion (see Figures 76-4 and 76-5).8 Stain precipitate, Howell-Jolly bodies, or other RBC pathogens such as Mycoplasma haemofelis have features that distinguish them from C. felis piroplasms, but a less experienced microscopist may misidentify them as C. felis. Importantly, recovered cats may harbor piroplasms for months to years after initial infection. It is important to realize that piroplasms might be discovered incidentally in chronic carrier cats that survived infection in the distant past. Thus, although identification of piroplasms confirms infection, piroplasms alone (especially in low numbers) cannot confirm that current illness is due to cytauxzoonosis. 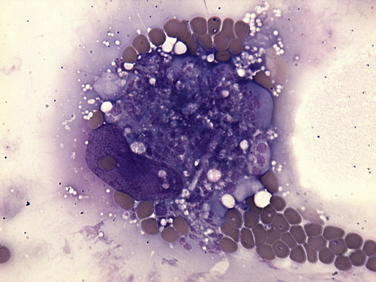 FIGURE 76-5 Wright-Giemsa–stained peripheral blood smear from a cat with cytauxzoonosis at 1000× magnification.
A mononuclear cell massively distended with a schizont is surrounded by multiple RBCs, a few of which contain Cytauxzoon felis piroplasms.