First Described: Cryptosporidium was first described in mice in 1907 (Tyzzer).1 Although Cryptosporidium spp. oocysts were reported in feces of cats and dogs in earlier reports, genetic evidence for the existence of host-adapted species was reported in 1998 (cats) and 2000 (dogs).2,3

Affected Host Species: Dogs and cats are the definitive hosts for the species-adapted C. canis or C. felis, respectively. Other Cryptosporidium spp. such as Cryptosporidium parvum may be detected in dog or cat feces, but the potential for disease causation is unclear.

Intermediate Hosts: Although there are no intermediate hosts, there are multiple potential transport hosts that may carry Cryptosporidium spp. oocysts and indirectly infect dogs or cats.

Major Clinical Signs: Most dogs and cats harbor subclinical infections. Acute watery diarrhea or chronic or intermittent diarrhea and weight loss may be noted in animals with concurrent infections such as Giardia spp. or Tritrichomonas foetus, immunocompromise, or coexistent conditions such as inflammatory bowel disease.

Human Health Significance: Cryptosporidium parvum and C. hominis are the species most commonly associated with disease in people; neither of these organisms is common in dogs and cats. Although DNA of C. felis and C. canis has been amplified from human feces, the disease-inducing potential in humans appears to be minimal. However, immunocompromised people should take extra care to avoid accidental ingestion of dog or cat feces, particularly if diarrhea is present.

Cryptosporidium spp. infections of dogs and cats can be quite common, with prevalence rates generally being 2% to 12% in dogs or cats with or without diarrhea, depending on the method of diagnostic testing.19-30 In one study of specimens collected from around the United States, Cryptosporidium spp. DNA was amplified by PCR assay from feces of 29.4% of cats and 15.1% of dogs with diarrhea.24 In a study of cats in shelters in upstate New York, fecal flotation identified oocysts in 3.8% of the cats tested.21

Cryptosporidium felis and C. canis are transmitted among dogs and cats by the ingestion of oocysts in feces from mutual grooming, shared litter boxes, ingestion of contaminated food or water, and possibly ingestion of infected prey species. The oocysts are passed in the feces already sporulated and so are immediately infectious (Figure 81-1). In a study of cats inoculated with C. parvum, oocysts were detected by day 7 and C. parvum DNA was detected by day 2 after inoculation.31 In contrast, C. felis oocysts are first shed in the feces 3 to 6 days after infection. Approximately 20% of the oocysts produced in the intestine are “thin-walled” oocysts that fail to form an oocyst wall. These oocysts rupture within the intestines, and when the sporozoites are released, auto-infection occurs, which allows for rapid amplification of infection. Thick-walled oocysts are passed in the feces, are environmentally resistant, and are the likely source of new infections. Between 1 and 1000 oocysts of pathogenic species such as C. parvum are enough to cause infection in humans.4 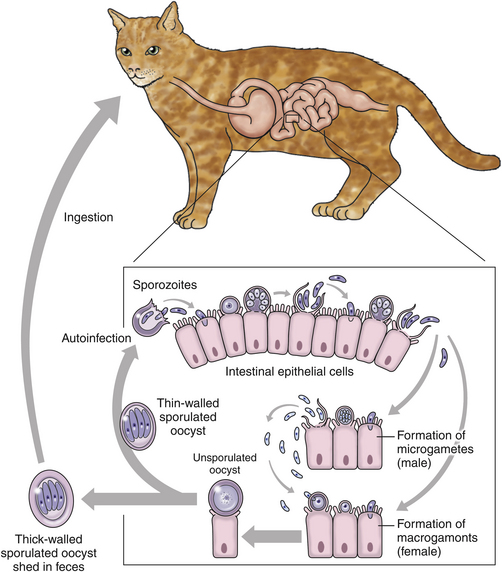 Although infection of dogs and cats with Cryptosporidium spp. is common, most infected animals are clinically normal. In prevalence studies, only rarely is there an association between positive Cryptosporidium spp. assay results and the presence of diarrhea.28 Diarrhea is generally more common in young animals.32–46 When diarrhea occurs, it is usually watery, without mucus, blood, melena, or straining, and so is classified as small bowel diarrhea (Figure 81-2). Weight loss may also occur. Co-infection with other protozoans such as Giardia spp. (dogs and cats) or Tritrichomonas foetus (cats) may be associated with more significant illness than infection with just one of the parasites.47,48 The presence of immunosuppressive diseases such as lymphoma, FeLV infection, canine distemper virus infection, or canine parvovirus infection also can potentiate the development of clinical signs of disease. Clinical signs appear to be more likely in cats infected with C. felis than in dogs infected with C. canis. In the cat with a mixed C. muris and C. felis infection, both vomiting and diarrhea were present, and C. muris was identified in the stomach in the presence of inflammation.18 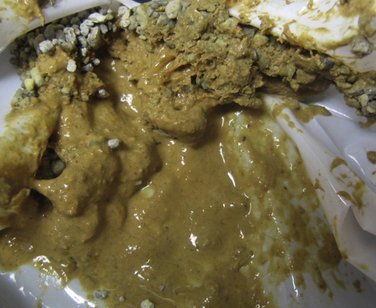 FIGURE 81-2 Characteristic appearance of diarrhea induced by Cryptosporidium felis and Giardia spp. co-infection. The image is from the case example described at the end of this chapter.

Little information is available in regard to the pathogenesis of Cryptosporidium spp. in cats and dogs; most information is from what is known in humans and mice after infection by C. parvum.49 After ingestion, Cryptosporidium spp. sporozoites attach to the intestinal epithelium via interactions among multiple parasite ligands and host receptors. The organism resides between the cell membrane and the cell cytoplasm, which may partially explain its resistance to antiprotozoal chemotherapy. The intestinal epithelial cells act as a physical barrier and produce a variety of cytokines and chemokines in response to the pathogen. Mucosal infiltration with neutrophils, macrophages, and lymphocytes in the lamina propria can result. There is upregulation of both proinflammatory and antiinflammatory cytokines, and the ratio of these cytokines likely determines whether diarrhea develops. Cellular immunity mediated by CD4+ and CD8+α/β T cells is an important component for the resolution of C. parvum infection. When it occurs, Cryptosporidium spp. diarrhea is associated with impaired intestinal absorption and enhanced secretion.49 It is possible that susceptibility to cryptosporidiosis in animals could have a genetic basis as suggested for humans.50,51

Most dogs or cats colonized with Cryptosporidium spp. have a normal physical examination. On abdominal palpation, small intestines may feel slightly thickened. Because some dogs or cats with Cryptosporidium spp. infection and diarrhea have had underlying diseases such as inflammatory bowel disease, lymphoma, or infections (especially T. foetus, FeLV, canine distemper virus, or canine parvovirus), physical examination findings may reflect the presence of these conditions.

Cryptosporidium spp. infection alone is rarely associated with CBC or serum biochemistry panel abnormalities. Electrolyte and acid-base changes may be present if diarrhea is severe. If concurrent immunosuppressive conditions such as FeLV infection or FIV infection exist, test results consistent with those conditions may be present.

Abdominal radiographic and ultrasonographic abnormalities in dogs and cats with Cryptosporidium infection are uncommon, are nonspecific, and, when present, are suggestive of diffuse enteritis.

Specific diagnostic assays for cryptosporidiosis are shown in Table 81-1.

Diagnostic Assays Available for Cryptosporidiosis in Dogs or Cats 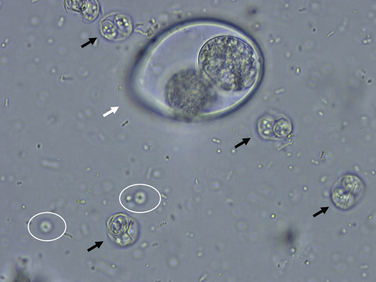 Centrifugal fecal flotation is usually performed as part of the initial diagnostic work-up of dogs or cats with small bowel diarrhea.53 Cryptosporidium spp. oocysts are frequently missed because of their small size, and only low numbers of oocysts are passed in infected dog or cat feces (often <500 oocysts/gram of feces).

A fluorescein-labeled monoclonal antibody system is available that contains monoclonal antibodies that react with Cryptosporidium spp. oocysts and Giardia spp. cysts (Merifluor IFA, Meridian Biosciences, Cincinnati, OH). In limited studies, this assay appears to detect both Giardia spp. and Cryptosporidium spp. isolates from dogs and cats.12,24,31,52 The IFA provides both a morphologic assessment of the oocysts and immunologic identification, which makes false-positive results unlikely.

Fecal ELISA antigen tests for Cryptosporidium spp. are available for use with human feces, but results of these assays have been variable when applied to feces from infected animals.12,52,54 The assays use antibodies against C. parvum in their design, and so the high false-negative rate in animals may reflect antigenic differences among C. parvum, C. felis, and C. canis.

Cryptosporidium spp. infection can cause mild intestinal thickening. Because the agent is not enteroinvasive, blood is generally not noted in the intestinal lumen unless co-infections are present. Animals with chronic cryptosporidiosis may be emaciated. The concurrent presence of other parasites such as roundworms or hookworms may be noted.